By Emily McConville — Published on September 8, 2017

At Convocation, the Bates community looks forward to the new academic year, surrounded by the college’s beech, ash, and pine trees, some of them more than a century old.

Following this year’s ceremony, a service held near the Class of 1929 Gate honored 17 faculty and staff who had died in the past year, in whose memory a young red oak was planted.

A memorial service as part of Convocation — to acknowledge grief and loss while welcoming new people — has been a Bates tradition for 20 years.

During the service, Multifaith Chaplain Brittany Longsdorf invited faculty, staff, students, friends, and family to come forward to a bowl filled from Lake Andrews. Those who did collected and poured water cupful by cupful onto the soil around the tree, to keep it healthy and strong. 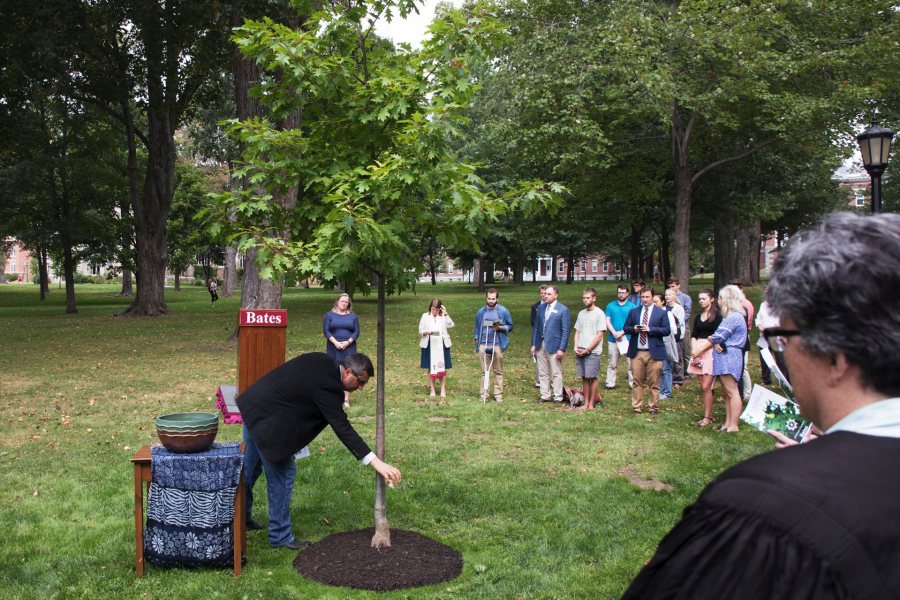 The trees surrounding the memorial red oak sapling are — like the Bates community — young and old, short and tall, of many different kinds. Many are themselves memorial trees.

The tradition was started in 1997 by College Chaplain Kerry Maloney, who is now Harvard Divinity School’s chaplain and director of religious and spiritual life.

“I wanted to tie so many holy endings to the great holy beginning of each new academic year,”  Maloney says.

“We embrace this complexity, this sacred tension between grateful remembrance and grief.”

Landscape architect Bill Bergevin, who selected and planted the red oak about three weeks ago, will continue to water the sapling until it’s ready to thrive on its own. In the next 60 years or more, it will grow tall like the older trees surrounding it. Friends and family of those departed can return to it. Students will pass it daily; they might lean against it to read books, or escape underneath it for shade.

During that time, the tree will become part of the Bates community, while it stands as a sign of the pain of loss and of the joy of remembrance, says Longsdorf.

“We embrace this complexity, this sacred tension between grateful remembrance and grief,” she said during the ceremony. “Thus we water new life in the form of a small tree, embracing that complexity and embracing the hope that we continue to honor our colleagues’ memory and presence that lingers still.”

Slideshow: Hour by hour with the Class of 2023 on Opening Day

Slideshow: Hour by hour on Opening Day for the Bates Class of 2022