The inaugural induction ceremony for Eta Sigma Phi, a national honor society for classics students, involved everything you might expect of a community of Latin and Greek scholars: candles, olive branches, and recitations in the voices of Plato and Homer.

What it signified was something greater: a growing community of enthusiasts of antiquity.

The idea of creating a chapter of Eta Sigma Phi first arose when Isa Barrengos ’19 and Caroline Barnes ’19, both classical and medieval studies majors, were looking for ways to connect outside their classes with others who enjoyed Greek myths, Roman politics, or ancient literature.

Students in the CMS major are “very into it,” Barrengos said. “We found ourselves talking about liminality and Artemisian rituals, and we thought, we should make a club.”

Eta Sigma Phi seemed like the perfect vehicle for creating such a community of classics students. The national organization suggests that a college should have a classics club before applying to create a chapter.

As it turned out, the Bates Classics Club already existed, though its level of activity had “waxed and waned” over the years, said Lisa Maurizio, professor of classical and medieval studies.

So in January, Barrengos and Barnes revived the club. Soon after, they successfully petitioned Eta Sigma Phi to create a chapter of the honor society, with Barnes as Hipparchus (chair), Barrengos as Chrysophlax (treasurer), and Maurizio as adviser. 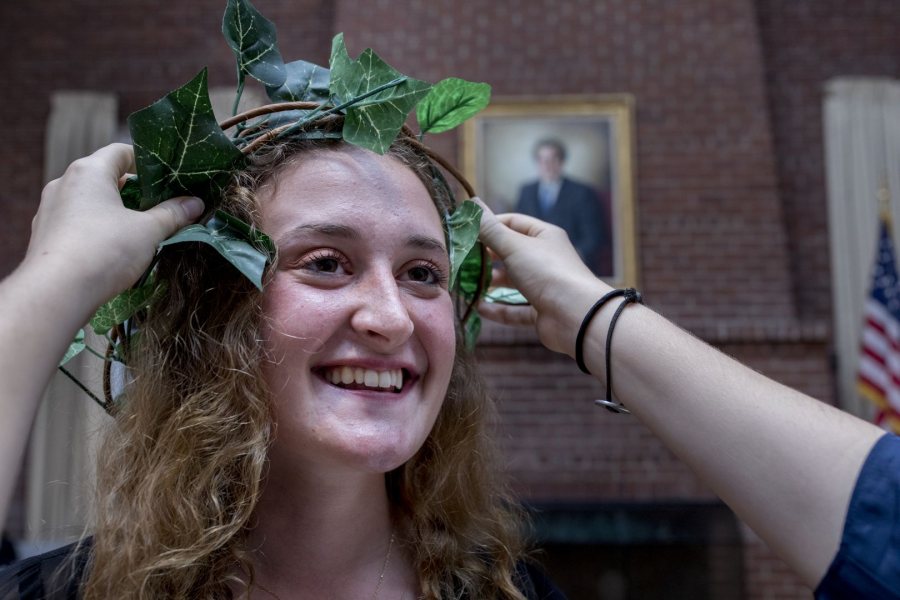 Reviving the club, it turned out, extended the classics community still further. While the dozen students inducted into Eta Sigma Phi in the Muskie Archives on Sept. 27 had to have a B average in three Greek or Latin language courses, anyone — from a fluent reader of Plato’s Greek to a fan of the Percy Jackson series — can join the Classics Club.

The club has big plans for the year, including film screenings, a trip to the Museum of Fine Arts in Boston, and a presentation by a local ancient coin collector.

CMS majors who do meet Eta Sigma Phi’s requirements have the added benefit of joining a national community of students and scholars of classics, with translation contests, scholarships, and a national conference.

“If you go into graduate school for classics or even if you’re just interviewing for a job, you can say, ‘Not only was I a classics major, but I was a serious classics major. I was committed to it, and this is how I can show you,’” Barrengos said.

Both the society and the classics club give students a way to connect with CMS majors outside class — to talk about literature, politics, culture, and myths of antiquity.

“The students are hungry for intellectual engagement,” Maurizio said. “They are striving to create conversations about the way classics intersects with the modern world outside of classes as well as within classes. I see both the Classics Club and Eta Sigma Phi as fostering a community in which those conversations can take place.”