Good things happen in threes. So do great things, especially for Bobcat sports this past week. Take a look:

Guided by senior coxswain Hanna De Bruyn of Old Lyme, Conn., the Bates women’s varsity eight set a course record on Oct. 22 to win the women’s collegiate eights at the prestigious Head of the Charles Regatta.

De Bruyn and her crew navigated the serpentine 4,800-meter course on the Charles River in 16:01.182, outpacing last year’s Head of the Charles winner Wesleyan by 16.863 seconds. 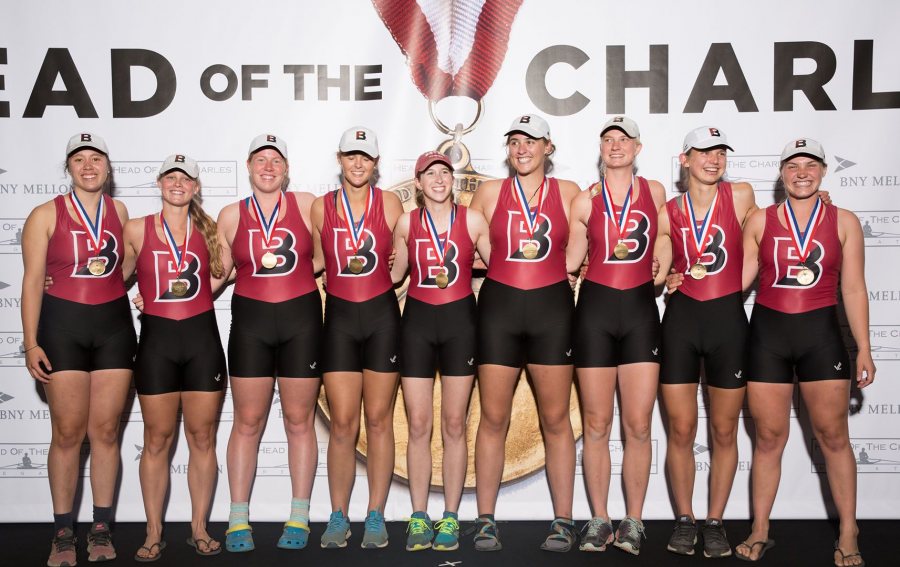 Bates women’s rowing captured the women’s collegiate eights at the Head of the Charles on Oct. 22. (Photograph by Daniel D’Ottavio)

2. Men’s soccer qualifies for NESCACs with amazing goal vs. Colby

The Bates men’s soccer team heads to the NESCAC championship tournament thanks to a miraculous goal scored in the final minute of the Bobcats’ regular-season finale at Colby on Wednesday afternoon.

Sophomore Beaufils Kimpolo-Pene of the Bronx, N.Y., knocked in the rebound of his initial saved shot with 24 seconds left in the second overtime period.

Bates plays at top-seeded Tufts Saturday at 2:30 p.m. in the NESCAC quarterfinals.

For the third straight year, the Bates field hockey team beat Colby in the final game of the season to earn a spot in the NESCAC tournament. Here’s what it looked like:

With the win, Bates earns the eighth seed in the NESCAC tournament and visits top seed and No. 2 nationally ranked Middlebury on Saturday. The NESCAC quarterfinal match is set for 12:00 p.m.