Censorship of scientists is ramping up, but hostility is nothing new

It’s been well-chronicled how federal agencies like the Environmental Protection Agency are taking unprecedented steps to silence climate scientists — preventing researchers from speaking, burying some climate research, and ignoring or minimizing other research.

But, as Professor of Geology Mike Retelle points out, hostility to climate science is nothing new.

Last month, Retelle joined Professor of Geology Beverly Johnson, Associate Professor of History Joseph Hall, and Professor of Physics John Smedley for a current-events discussion in Pettengill Hall, and he described the travails of climate researchers such as Jim Hansen.

The former NASA scientist sounded the alarm about global warming in U.S. Senate testimony back in the 1980s, then faced intense backlash from politicians and the public. (Hansen has been arrested multiple times during environmental protests.) 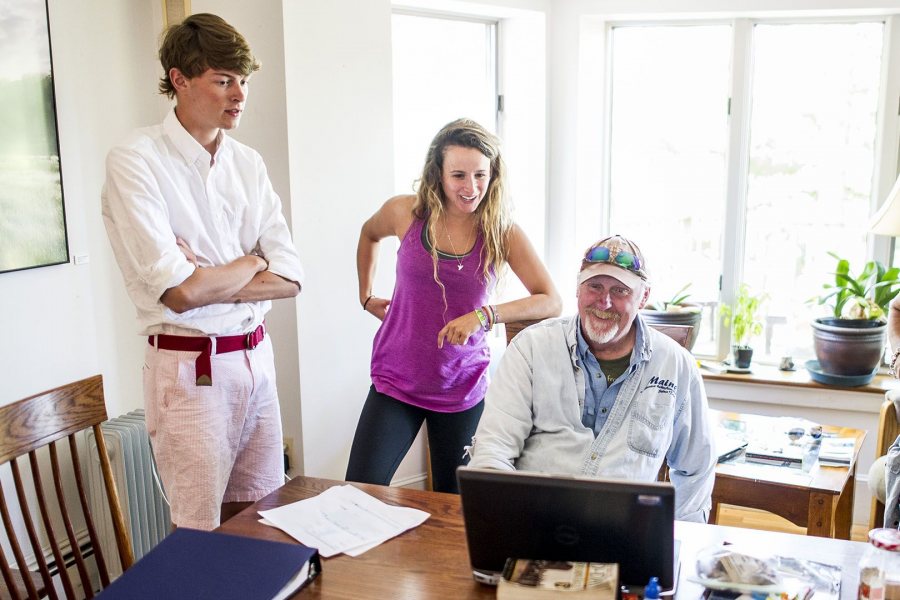 Climatologists Michael Mann, Malcolm Hughes, and Raymond Bradley — the latter was Retelle’s doctoral thesis adviser at the University of Massachusetts — faced similar opposition after publishing evidence for the “hockey stick,” a charting of global average temperature that shows a dramatic rise after 1850.

“They had their jobs threatened,” said Retelle, whose research looks at climate-change records preserved in arctic lake sediments. “They had their lives threatened numerous times. That continues to this day, the harassment of these three.”

In a discussion moderated by Lynne Lewis, Elmer Campbell Professor of Economics, Retelle and his colleagues offered a range of perspectives on federal government hostility to — or outright censorship of — the science that points to global warming and the people who study the phenomenon.

The recent spike in attempts to silence climate scientists has been well-reported.

In late October, the EPA canceled the presentations of three of its scientists, who were set to talk about climate change at a conference in Rhode Island. 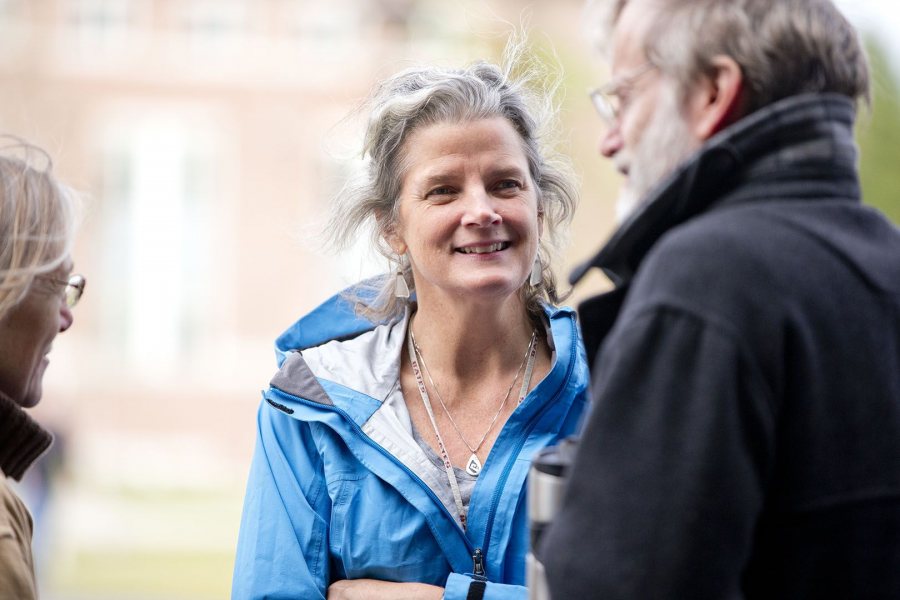 Johnson knows two of the three EPA scientists whose presentations were canceled. They’d been slated to speak about the impacts of climate change on the Narragansett Bay and its watersheds, and the order stopping them came from the office of Deputy Associate Administrator for Public Affairs John Konkus, a former Trump campaign staffer who now reviews all the grants the EPA awards.

Johnson, an expert in how coastal wetlands capture and store carbon dioxide, said the intervention amounted to silencing. Worse, it could erode trust in scientists.

“There is definitely a feeling [among scientists] that there is quite a bit of censorship going on,” she said.

Congress sometimes hears about climate change from non-specialists in climate science, Retelle said. In 2005, for example, novelist Michael Crichton, whose book State of Fear is about eco-terrorists’ efforts to exaggerate the dangers of global warming, testified before the U.S. Senate.

The un- or under-qualified can make their way into the government, too, said John Smedley, who has taught courses on energy and the environment and has been active for years in campus sustainability issues. One example is Kyle Yunaska, the brother-in-law of Eric Trump, who, without a background in energy policy, is chief of staff of the Department of Energy’s Office of Energy Policy and Systems Analysis.

“People are being appointed to important positions who don’t have the strong scientific backgrounds that are normally associated with such positions,” Smedley said.

One politician close to Bates’ heart, Hall said, also lacked a background in science — but he made it his business to learn about the environment, to great public benefit.

Entering the U.S. Senate in 1959, Edmund Muskie ’36 was placed on a subcommittee on air and water pollution. Though he wasn’t an environmentalist at the time, he educated himself and the public about the dangers of pollution, leading to landmark environmental legislation in the 1960s and ’70s. 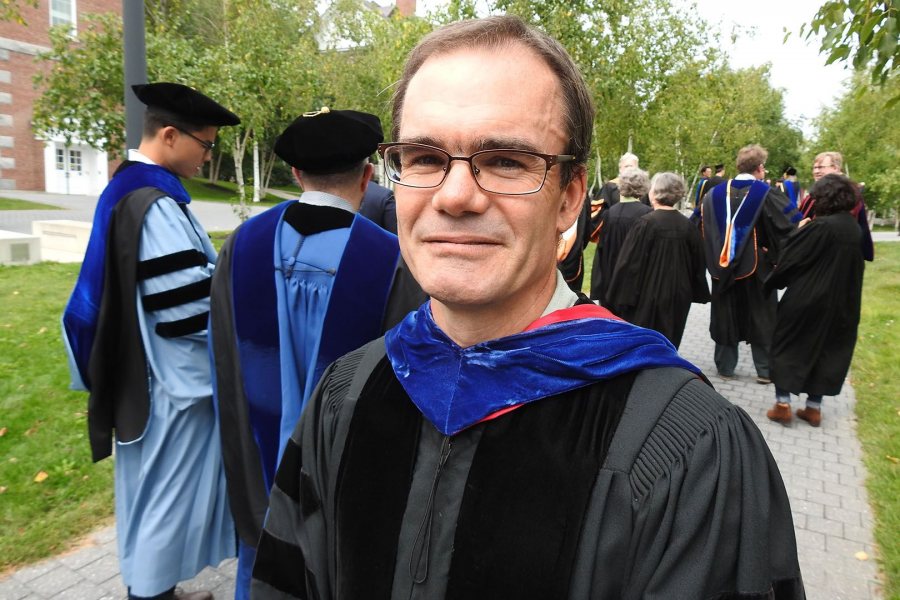 “He was able to develop enough expertise in pollution control so that when industry advocates said, ‘This is too complicated,’ he had answers,” Hall said. “His comments convinced his Senate colleagues that the solutions he proposed were legitimate.”

After the professors spoke, audience comments could be boiled down to a few central issues: how to convince, how to educate, and how to advocate for environmental protection and scientists’ freedom of speech.

Peggy Rotundo, director of strategic and policy initiatives at the Harward Center and a former state legislator, told students to do something — write a letter to the editor, organize a district meeting, or get in touch with a congressperson. In fact, a representative of U.S. Sen. Angus King, I-Maine, attending with Rotundo, rose to offer strategies for contacting representatives.

“There are all sorts of possibilities, and I think it’s important for each of us to commit ourselves to taking some kind of action,” Rotundo said. “We have to stay motivated. We can’t just sit back and say this is beyond us. We all have to act in some way.”

Because the reality of climate change, in the end, is irrefutable.

“One of the things that’s really important to recognize, in light of all that we’re talking about today, is just how powerful knowledge is,” Hall said. “The fact that the Trump administration is so diligently silencing experts suggests just that.” 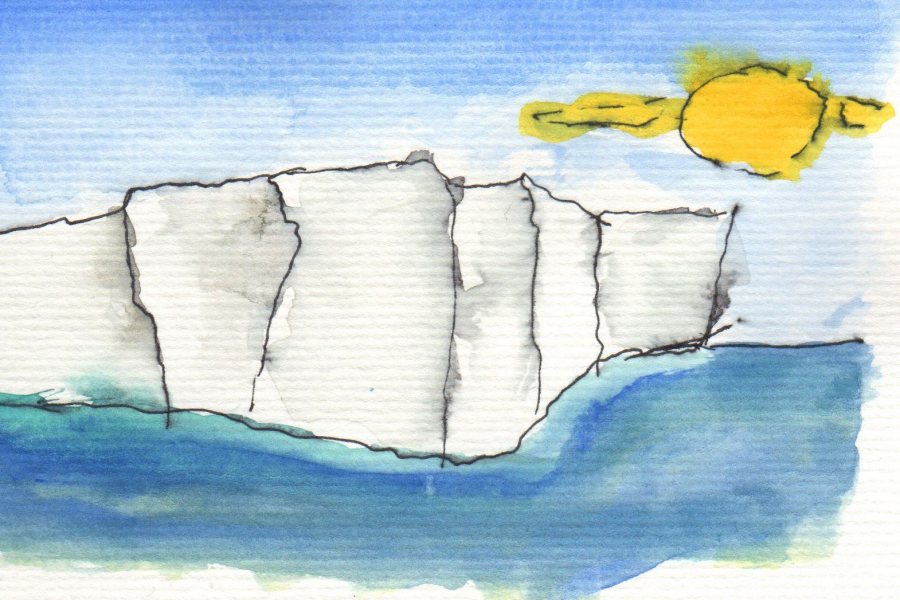 This watercolor and others were created by oceanographer Gregory Johnson ’85 in 2013. Along with haiku, he used the paintings to illustrate various concepts of climate change. (Copyright Gregory Johnson)