When a delegation from the Bates theater department went to a college theater festival in Connecticut last month, their Airbnb lodging turned out to be the erstwhile country getaway for the late king of television variety shows, Ed Sullivan.

The two faculty, one alumnus and four students from Bates were open to any supernatural visitations from Sullivan, but he was a no-show. No matter: For the students, all veterans of the 2017 Bates production of Diary of a Madman, what counted was the real-world show business contacts and experiences they gained at the Kennedy Center American College Theater Festival.

Those experiences included two KCACTF awards to students, one for achievement in publicity design and a second for mastery of backstage practices. 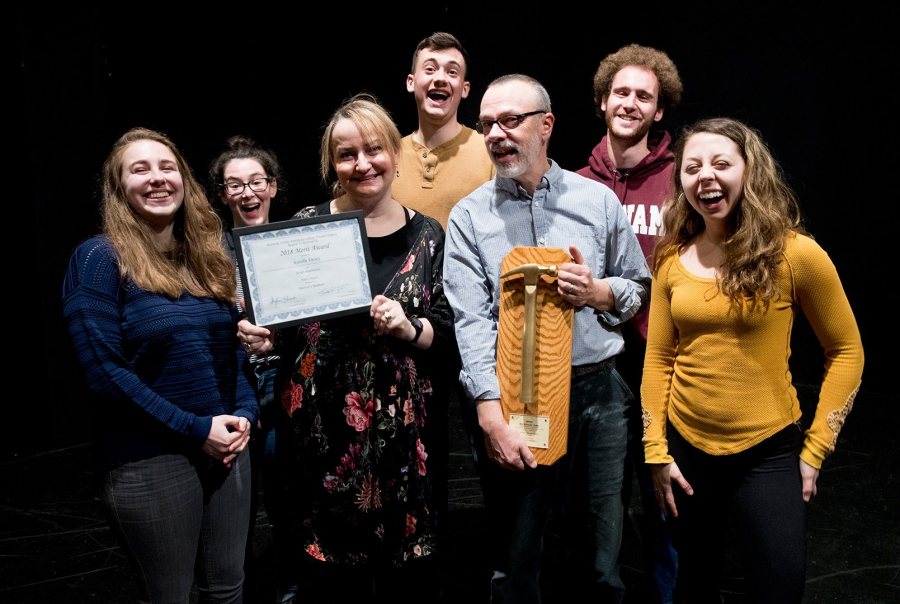 In March, the Kennedy Center notified Bates that Diary of a Madman had received four additional awards:

Students are the focus of the festival, which affords opportunities to present work in myriad aspects of theater to a professional audience. For students considering a stage or screen career, both the KCACTF awards and the sheer experience of attending the event are valuable.

“Students get really good feedback on their work,” Vecsey says, “and also good networking opportunities. And it’s a good opportunity to see who does what, and why, and where to go” in the complex, competitive world of show business. 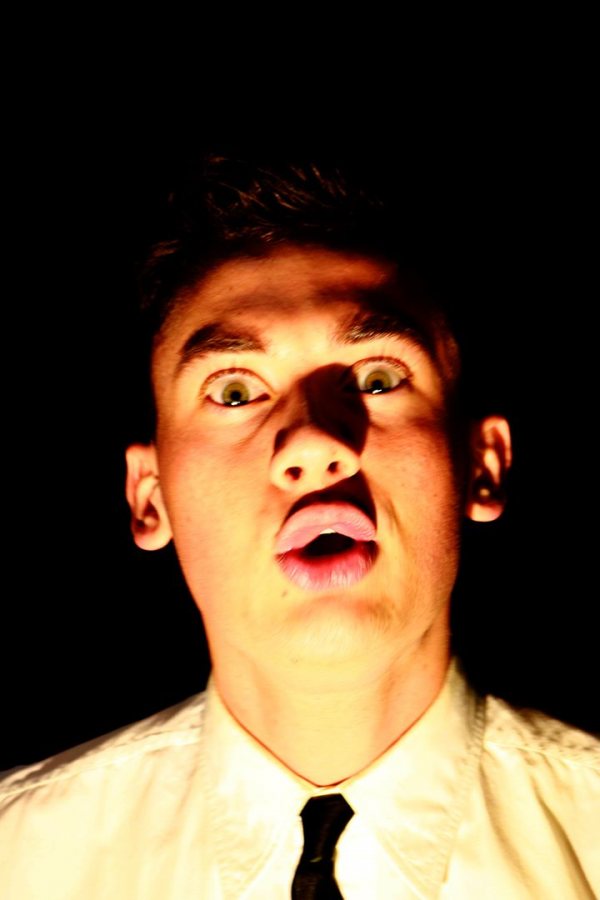 Rachel Forcillo ’18 took this photo of Madman actor Nate Stephenson and used it as the basis for her “mosaic” poster.

While it’s a student-focused festival, Vecsey does point to professional benefits for the faculty who accompany the students. “It’s good to put yourself into the competition in a way that you can see where you are,” she explains.

“You know, you might be a superstar on your own campus, but as soon as you go to a competition, you realize that, ‘Maybe I really need to do more work.’” (The eight regional festivals send 125 students to compete in the national festival in April in Washington, D.C.)

Stage manager Rebecca Berger ’19 of Bethesda, Md., received the Golden Hammer Award, which recognizes productions that demonstrate exceptional skill in and knowledge of backstage practices, from load-in to load-out.

Requiring three computers, 18 onstage monitors, and more than 1,000 cues, Madman was a bear to build technically — but once built, it was impressively straightforward to stage at the festival, held Jan. 30–Feb. 4 at Western Connecticut State University. 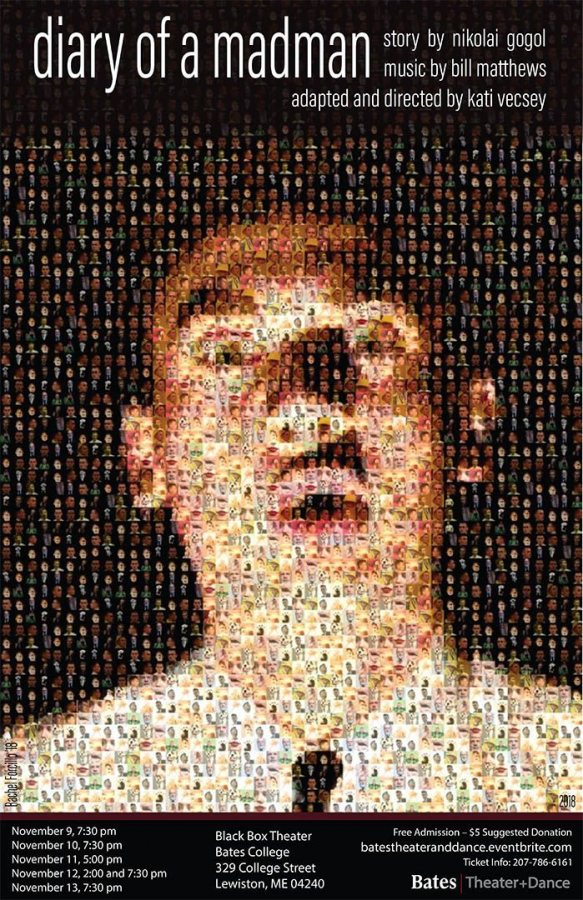 “It was high-tech,” says Vecsey, “but despite that, it was just very easy to load it in, set it up, and and load it out.”

For the Golden Hammer, Berger submitted “the stage management handbook that she made and worked from,” says Vecsey. And that book was assessed by so-called respondents — judges, more or less — whom Vescey describes as Broadway stage managers.

The third award went to Rachel Forcillo ’18 of Grosse Pointe, Mich. She received a Merit Award for Publicity for her Madman poster design — a mosaic image that compiles thousands of still photos to depict the face of Nate Stephenson.

For the poster, Vecsey suggested the photo mosaic, which had a counterpart in some of the monitor imagery onstage. For the image that would ultimately be rendered as the mosaic, Forcillo photographed Stephenson on the set, lighting his face from below in classic scary-tales-around-the-campfire fashion.

“The entire time, Kati screamed ‘Be mad! Madder! You are a MADMAN!’ so he’d get into character,” Forcillo says. “I showed her the shot and she was like, ‘That’s the one.’”

Working with photos taken by Grace Link ’19 and edited by Lily Kip ’19, Forcillo painstakingly recolored them to match different regions of the master portrait. Finally, she used an online mosaic generator to match the “tile” photos with the appropriate color regions.

“The entire time, Kati screamed ‘Be mad! Madder! You are a MADMAN!’”

Another student making a strong showing at the KCACTF was the play’s sole onstage performer, Nathaniel Stephenson ’18 of Ellsworth, Maine. Not only did he perform Madman twice, but he also auditioned for the esteemed Irene Ryan Acting Scholarship. (Yes, a scholarship established by the actress who played Granny on The Beverly Hillbillies.) Out of a field of 180, Stephenson made it to the semi-finals, in company with 35 other student actors.

One of the two respondents for Madman was Michelle Bombe, national vice chair of the festival and director of the theater program at Hope College in Michigan. “I was able to talk to her about my work,” says Stephenson.

“The importance of connections in the world of professional theater can’t be understated, and the festival is a great place to make them.” 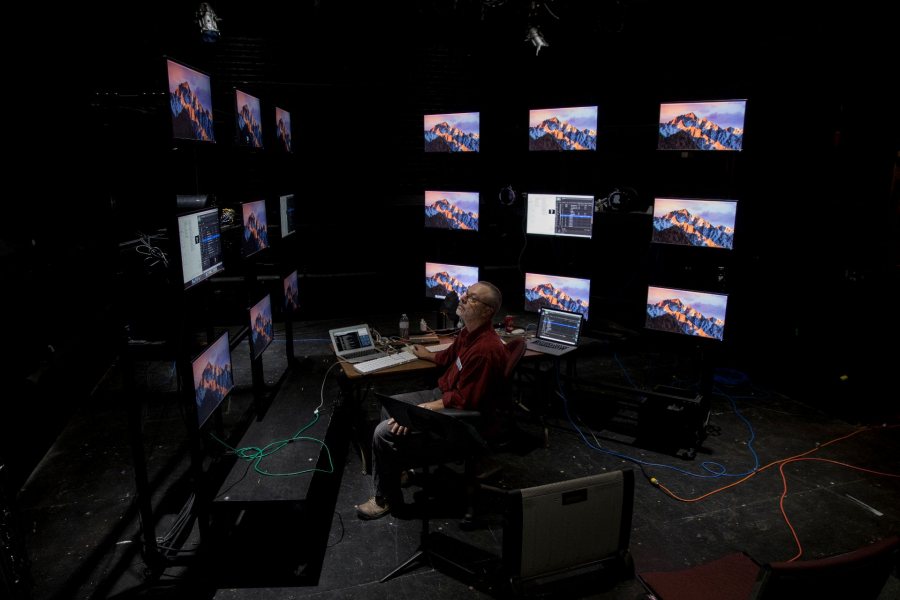 A double major in theater and in French and francophone studies, Stephenson took Vecsey’s Madman adaptation as his project for a six-week summer training at the Moscow Art Theater last year, and it’s the topic of his honors thesis project. He aims to start his professional acting career in Boston after graduation.

The Merit Award for Script Adaptation is the second KCACTF award that Vecsey, who also directed Madman, has received. The first, in 2013, recognized her interdisciplinary collaboration with Bates composer Bill Matthews, Alice Swanson Esty Professor of Music, for the Bates production of 1000 Airplanes on the Roof. Matthews also wrote music for Madman.

What led Vecsey to adapt the Gogol story for the stage? “Growing up during communism in Hungary,” she says, “I loved the Russian literature.”

The story also intrigued her because it is considered one of the earliest literary treatments of schizophrenia. Finally, the notion of adapting a story from 1835 posed a dramaturgical problem that Vecsey found compelling: “How can you make it relevant today? And would an audience perceive it as, ‘Yes, this person is really mentally ill’?”

Part of the challenge, then, involved finding 21st-century equivalents of 19th-century activities. So the protagonist, Everyman (the character that Gogol called Poprishchin) pours his thoughts into a blog instead of the titular diary, for example.

In addition to Stephenson and Berger, Bates students attending the festival were Lila Patinkin ’20, Stephenson’s scene partner in the Irene Ryan Auditions, and Nora Dahlberg ’18, who presented her costume design thesis. They were accompanied by Vescey; Madman production designer Michael Reidy, senior lecturer and managing director of theater and dance; and Daniel Paseltiner ’16, who works in a neuroscience lab at Bates but helped Reidy with programming. 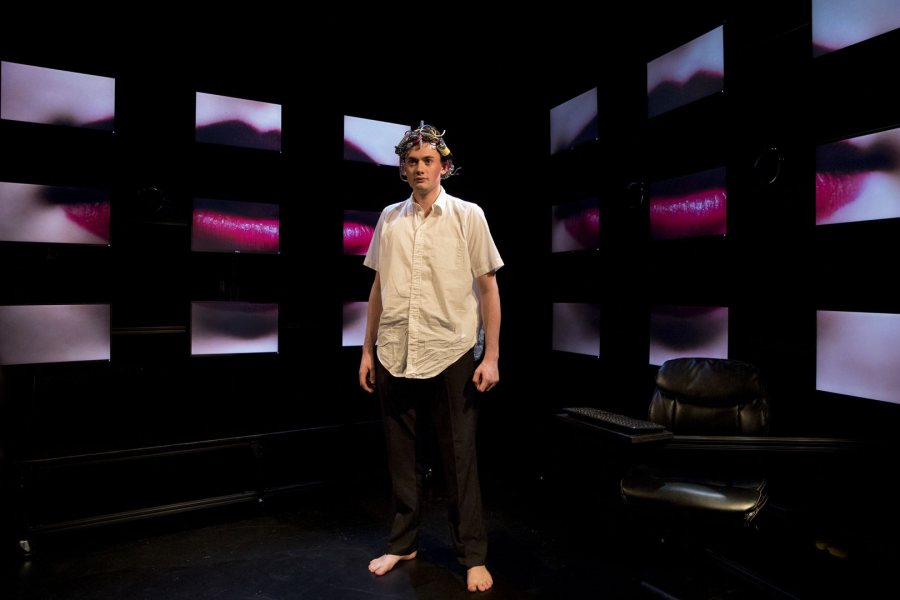