Last year, men’s lacrosse player Otis Klingbeil ’20 of Columbus, Ohio, took on a team task: keeping his teammates informed about the fickle Maine weather so everyone comes to practices and games with the right gear.

“I didn’t want to have to repeat myself 40 times to the guys on the team,” Klingbeil said. “So I figured, what better way than to start an Instagram account?”

Thus was born a phenomenon: Batesmlaxweather.

At first, Batesmlaxweather did only what the name says, providing game-day weather forecasts for players. Klingbeil’s initial posts featured marked-up screen shots from a weather app, plus hashtags like #catsloverain. 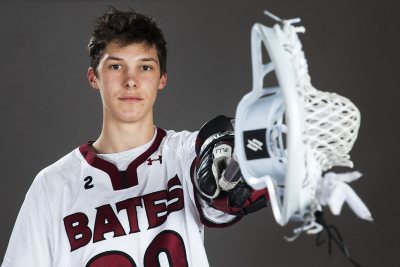 Otis Klingbeil ’20, “chief meteorologist” for Batesmlaxweather, which has morphed into a weather/comedy site. (Theophil Syslo/Bates College)

But soon, trading on his audience’s knowledge of Bates and NESCAC, Klingbeil, the self-styled “chief meteorologist” for Batesmlaxweather, veered toward humor.

And it turns out that the Bobcats, perennial NESCAC powers, are pretty good when they give comedy a shot.

Mining rich territory covered a few generations ago by National Lampoon and more recently by websites like College Humor and Funny or Die, Klingbeil, along with collaborator Jack Maritz ’18, began offering good-natured videos rich in satire and parody, like “The Most Interesting Cat in the World.” (He asks Security for their IDs.) 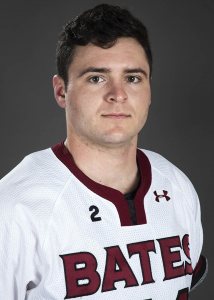 In a parody of Matthew McConaughey’s Lincoln car commercials, Charles Harker ’19 drives around a snowy downtown Lewiston before an early March game vs. the Wesleyan Cardinals, drawling nonsensical comments about cats and birds: “In the wintertahm, there are a lotta hungry cats around.”

Halfway through the video, Klingbeil snaps at Fein, “You keeping up with this?”

In another sketch, Klingbeil and Maritz lecture Director of Athletics Jason Fein, a relative newcomer, on the NESCAC pecking order. (The Continentals won’t pose a threat, advises Maritz, because no one makes musket ammo any more.) Halfway through the video, Klingbeil snaps at Fein, “You keeping up with this?” 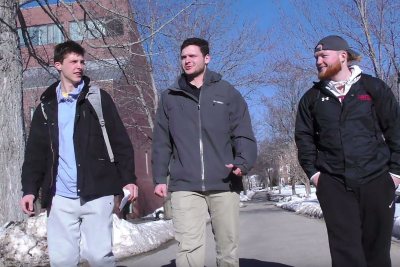 With nearly 1,000 followers as mid-April, Batesmlaxweather is the second-largest student-run Instagram account at Bates. (Tops is the Bates Photography Club, @batesphotocats, with more than 1,100 followers.)

Head coach Peter Lasagna is proud of what his players have created. “It shows that we have smart, funny, and interesting people in our program.” (Ironically, the coach himself is famously Internet-averse: He has no social media accounts of his own.)

With useful information, an authentic feel, and entertaining content, Batesmlaxweather does what we’ve long been told social media should do: In this case, create community among a group of Bates students, families, and friends. Says Maritz, “It’s been a lot of fun to engage the community like this.”