‘Get proximate to people who are suffering,’ Bryan Stevenson tells Bates Commencement audience

At the start of his undergraduate career, Bryan Stevenson loved college. In fact, he would say it to people all the time. “I was a very uncool college student,” he told a Bates audience on May 27.

But as a senior, he looked at different choices for graduate study and wondered if he’d find one that he could love and one that would align with his concerns about advancing social justice. Stevenson got his answer at Harvard Law. 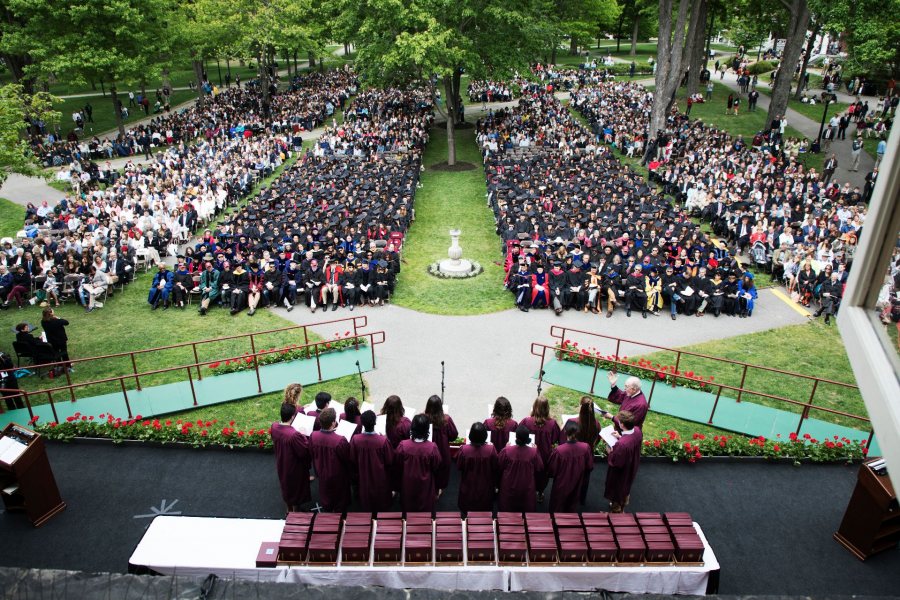 In the context of a course, he spent a month working with death-row inmates. “I got proximate” to the prisoners, he said. “In proximity to the condemned, everything changed for me. I found a calling.” And that experience set Stevenson, now a nationally esteemed human rights lawyer, on the path he still follows.

Offering an address that was a riveting mixture of reminiscence, humor, and urgent exhortation, Stevenson was the featured speaker and one of four honorary degree recipients at Bates’ 152nd Commencement. He spoke to 473 graduating seniors, their loved ones, faculty, and staff on a cool gray morning under the trees of the Historic Quad. 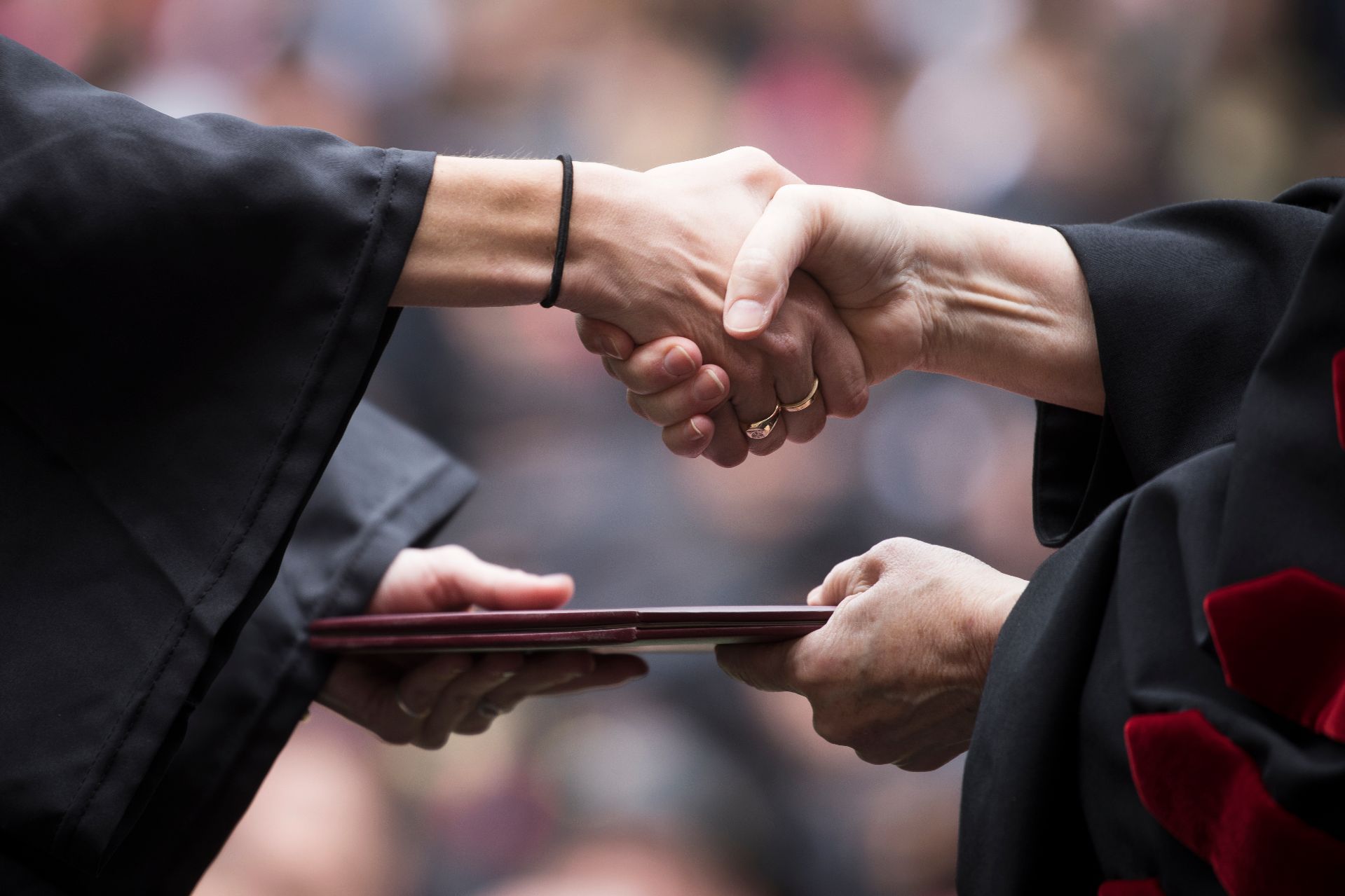 Bates granted degrees to 473 members of the Class of 2018 during Commencement on May 27. (Theophil Syslo/Bates College)

There may be no shortage of “change the world” messaging at college graduations, but Stevenson and Senior Speaker Rakiya Mohamed of Auburn, Maine, tackled the concept in ways that were disparate but equally convincing and appealingly personal. Stevenson offered four steps to making the world a better place, of which “getting proximate” was the first.

Video playlist of the Bates College Commencement on May 27, 2018:

Meanwhile, Mohamed, a double major in biological chemistry and African American studies, recounted how, at Bates, a first-year slump led her to really understand Gandhi’s well-known maxim, “Be the change you want to see in the world,” in a new way.

She told her fellow seniors that she set her sights on Bates early on. She was inspired by the students (including her mother) studying in Ladd Library, and by her Big Brothers Big Sisters mentor, who was a Bates student.

“I never thought of Bates College as just any ordinary school,” she said. “As a child, to me, it was a magical place where only the best of the best went.” 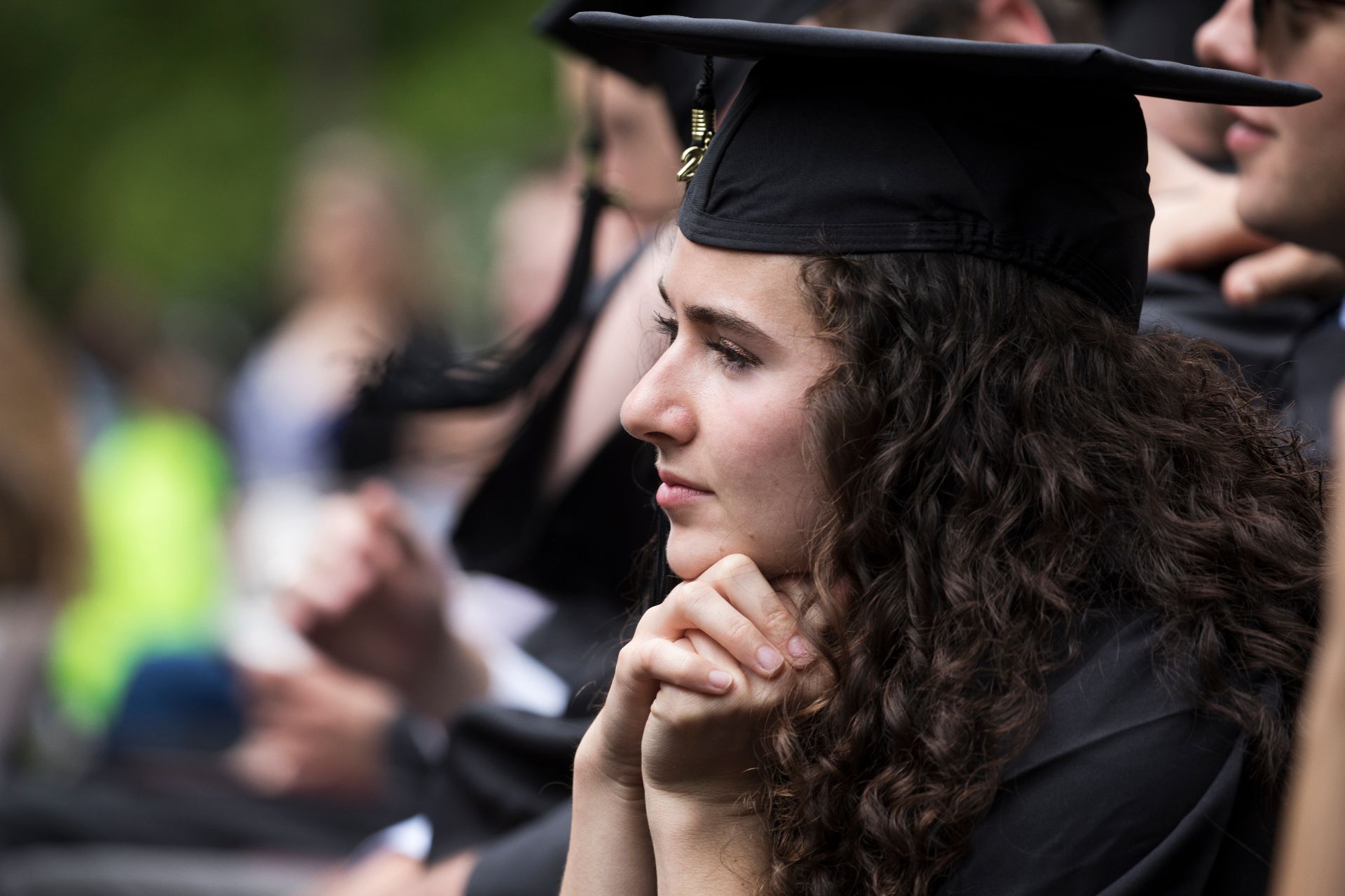 Lindsey Beauregard ’18 of Hollis, N.H., listens during Commencement on May 27, 2018. (Theophil Syslo/Bates College)

And it was the place, she believed, where she’d become a “certified world changer.” So it was — but not as easily as she thought.

It was only after a bad grade, serious thoughts about quitting college, and some helpful mentoring from Assistant Dean of Students Jessica Perez that Mohamed really grasped Gandhi’s meaning. “If I was going to make a change in this world, I needed to make a change in my world,” she told her fellow graduates. “Before I could be the change, I had to change myself.”

“This is what Bates, and more important, the people in it, have instilled in us during our four years” — people like faculty, friends, teammates, like-minded peers in student organizations, and Bates’ “small but strong community of black people.”

“We have taken it upon ourselves to make sure we change one another for the better. For that I am immensely proud to be a part of this class.” 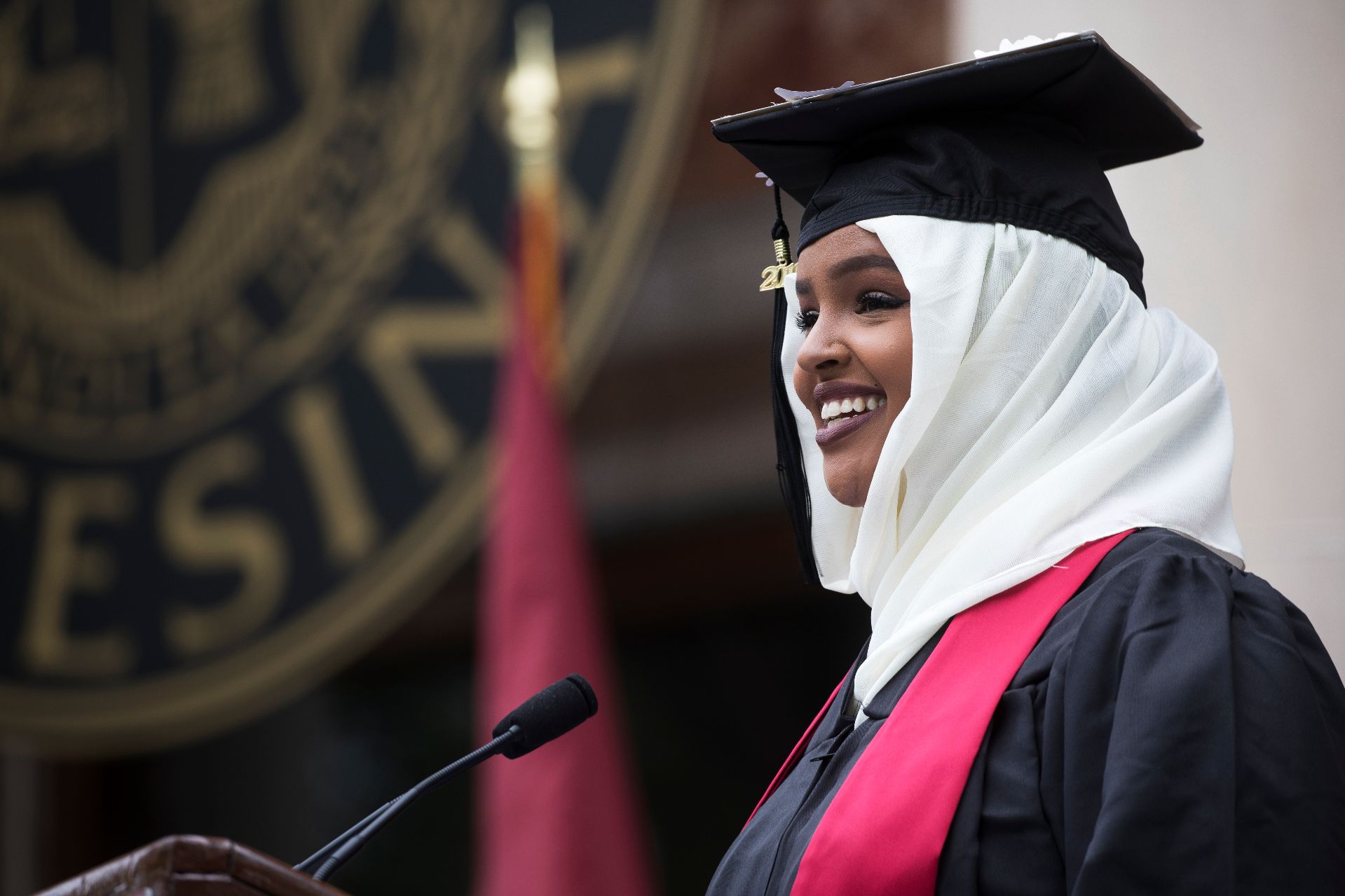 Rakiya Mohamed ’18 of Auburn, Maine, delivers the Senior Address during Commencement at Bates College on May 27, 2018. (Theophil Syslo/Bates College)

Stevenson is the founder of the Equal Justice Initiative, which has, among other achievements, won freedom or reduced sentences for more than 125 wrongly condemned death row prisoners.

His Bates appearance came about a month after he opened two institutions in Alabama that are dedicated to keeping alive the truth about the history of racial injustice in the U.S.: the National Memorial for Peace and Justice, a monument to the victims of lynchings; and the Legacy Museum: From Enslavement to Mass Incarceration.

Before Stevenson presented his prescription for bettering the world, he offered a few numbers clarifying what needs fixing, at least in the criminal justice system. He noted that 2.3 million people are in American jails and prisons — up from 300,000 in 1972 — making ours the highest rate of incarceration in the world. 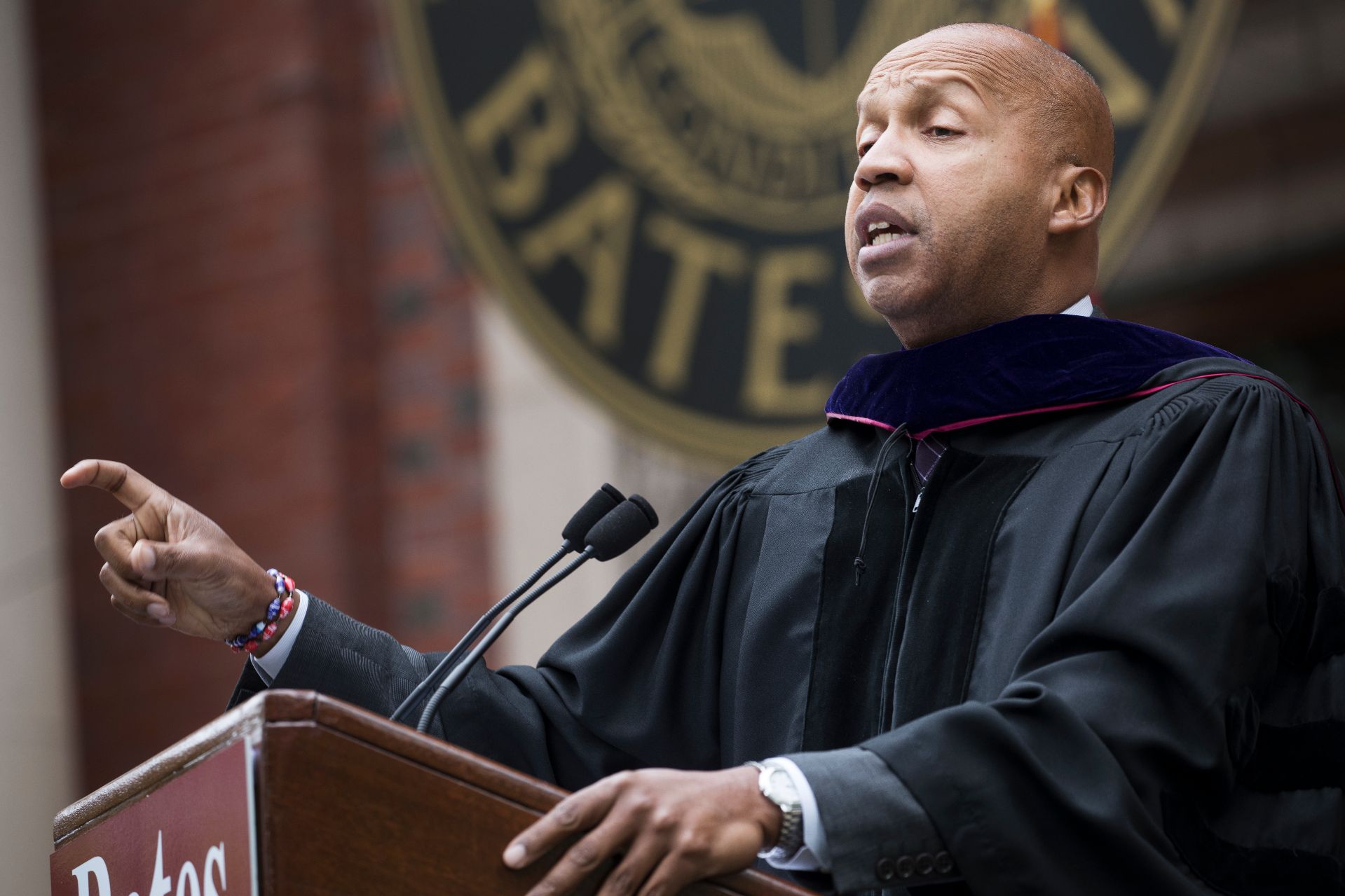 The percentage of women in prison has increased 646 percent in last 25 years, and 70 percent of those women are single mothers with minor children, with all that implies for family stability and child-raising.

“The statistic that keeps me up latest at night,” he said, comes from the U.S. Justice Department, which “predicts that in the United States, one in three black male babies born in this country is expected to go to jail or prison during his lifetime.”

None of Stevenson’s four steps toward bettering our world sounds easy, but their necessity was obvious. “Wherever you do, find ways to get proximate to people who are suffering,” he began. 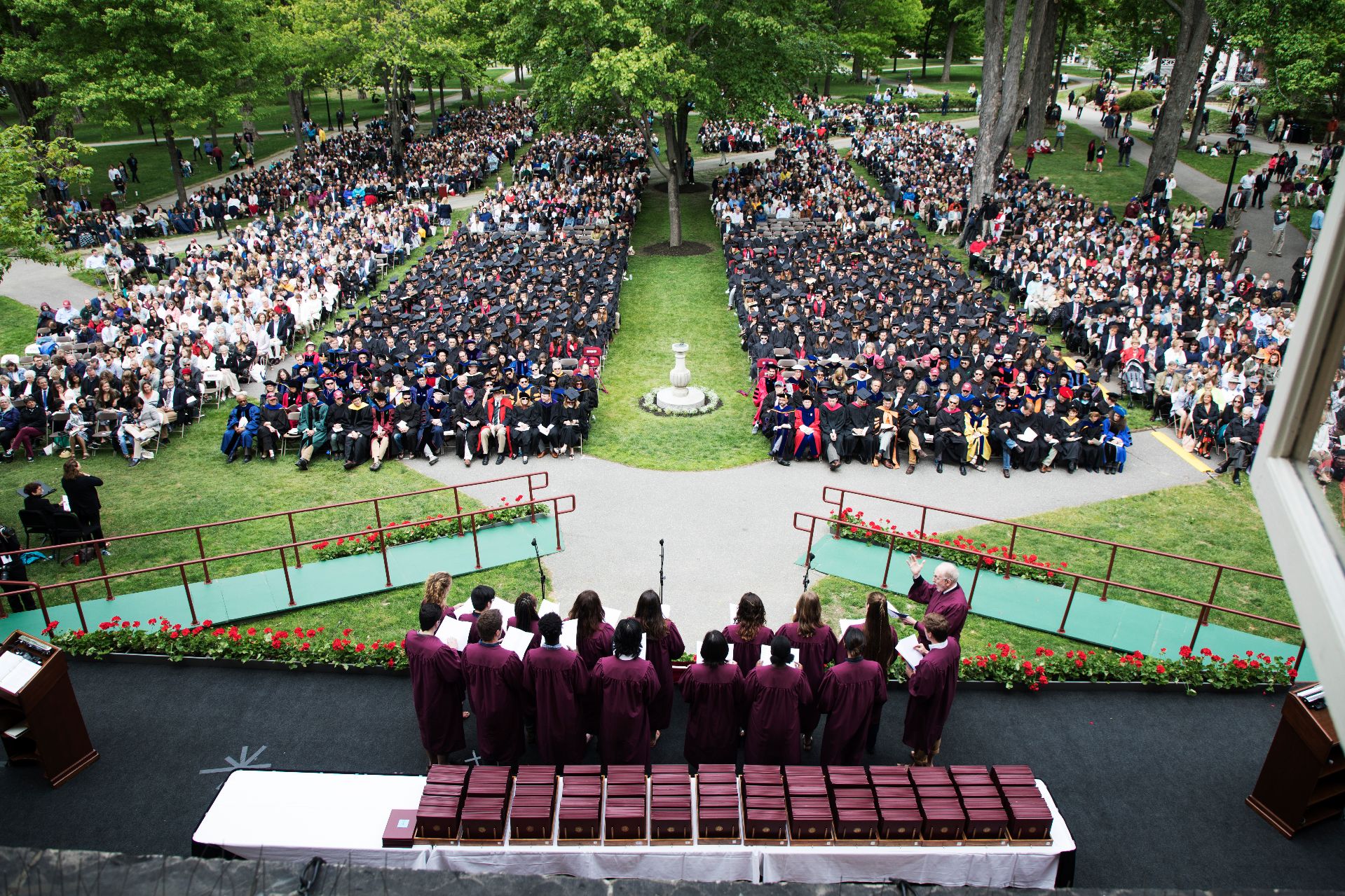 The Commencement Choir, conducted by Lecturer in Music John Corrie, sings “Who Is Wise” during Commencement on May 27, 2018. (Theophil Syslo/Bates College)

“When you get proximate to the excluded and the disfavored, you learn things that you need to understand if we’re going to change the world,” he told the Bates seniors. “Our understanding of how we change things comes in proximity to inequality, to injustice.”

“Proximity will empower you,” he said — noting that it was a lesson he learned in part from a grandmother whose fiercely loving hugs help keep her memory alive in him.

Step Two is to change prevailing narratives intended to justify and perpetuate injustice. A fundamental one is the narrative of racial inequality that accompanied the genocide of Native Americans during colonization, that excused slavery and its Jim Crow aftermath, and that persists today. 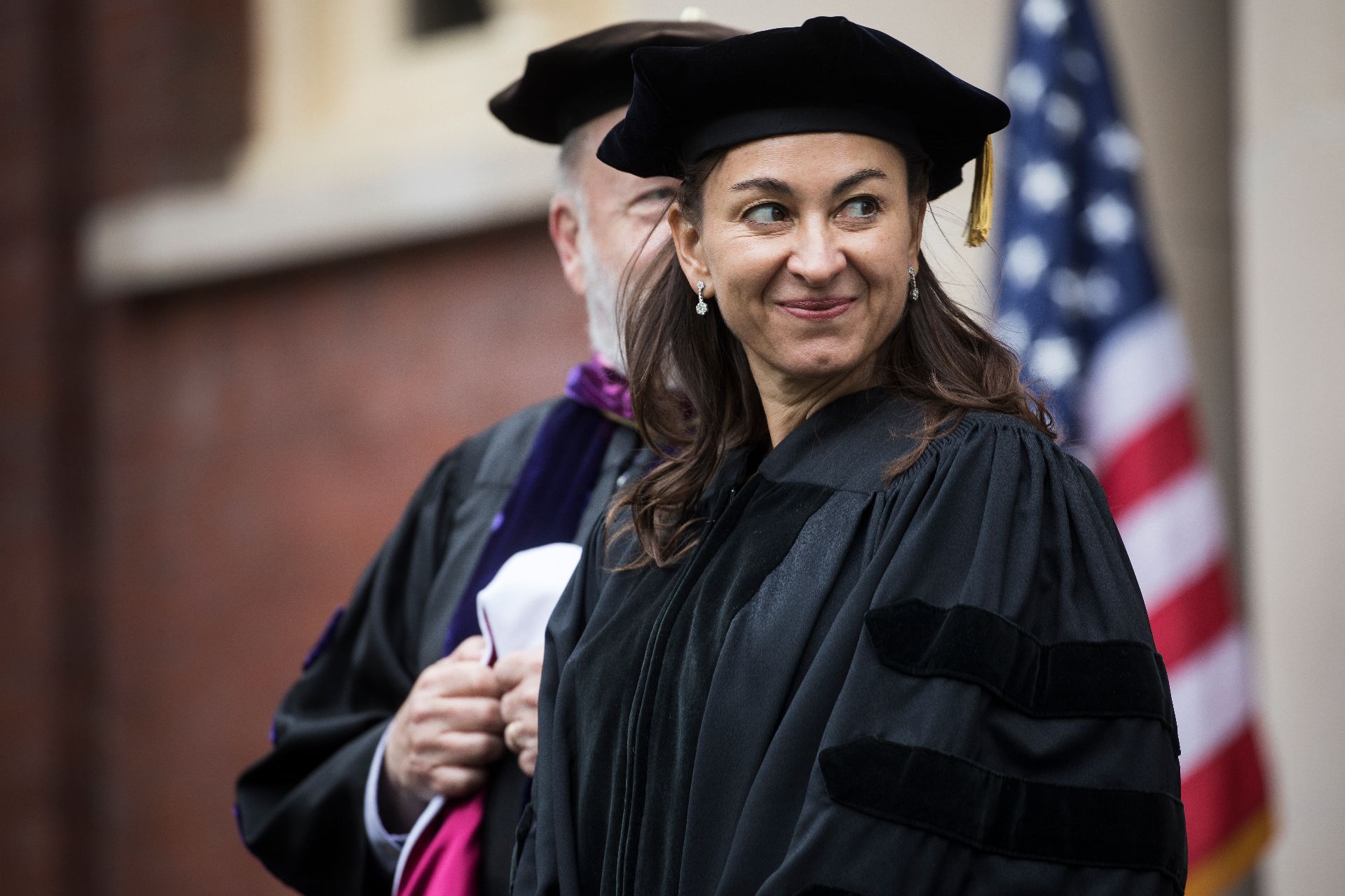 Lynsey Addario listens to the citation for her honorary Doctor of Humane Letters degree during Commencement at Bates College on May 27, 2018. Behind her is mace bearer Michael Murray, Phillips Professor of Economics. (Theophil Syslo/Bates College)

“In our new world, we’ve got to make it so that no black or brown person is ever presumed dangerous or guilty because of their color,” he said. “We’ve got to break all of the ceilings that will limit some of you graduates from achieving your dreams.” 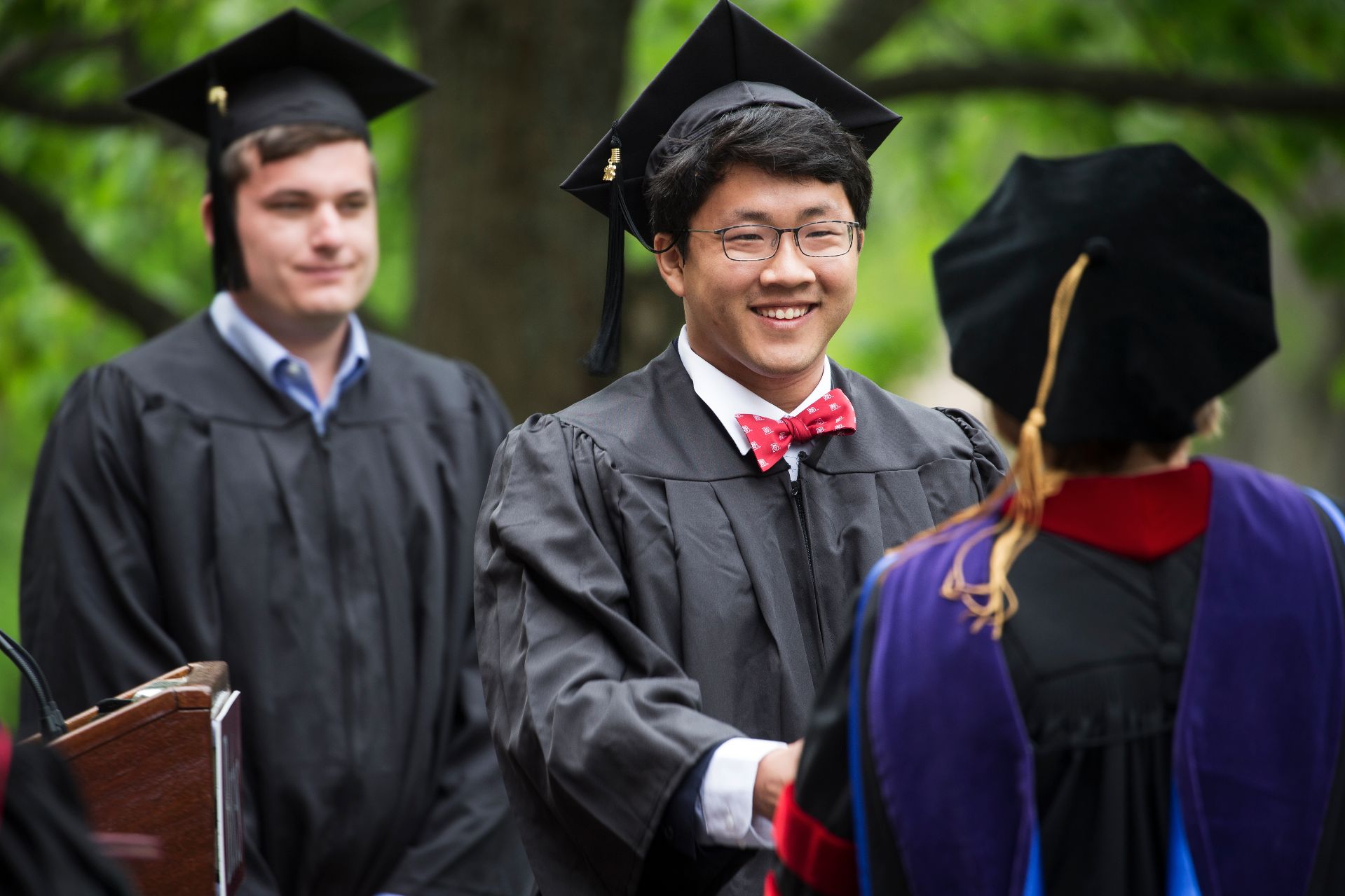 Elliot Chun ’18 of Bedford, N.H., receives his diploma during Commencement at Bates College on May 27, 2018. (Theophil Syslo/Bates College)

“I believe that hopelessness is the enemy of justice, and injustice prevails where hopelessness persists,” he said.

The fourth and final step in Stevenson’s formulary was that “to change the world, you’re going to have to be willing to do things that are inconvenient and uncomfortable. You cannot change the world if you insist on only doing what’s comfortable and convenient.” 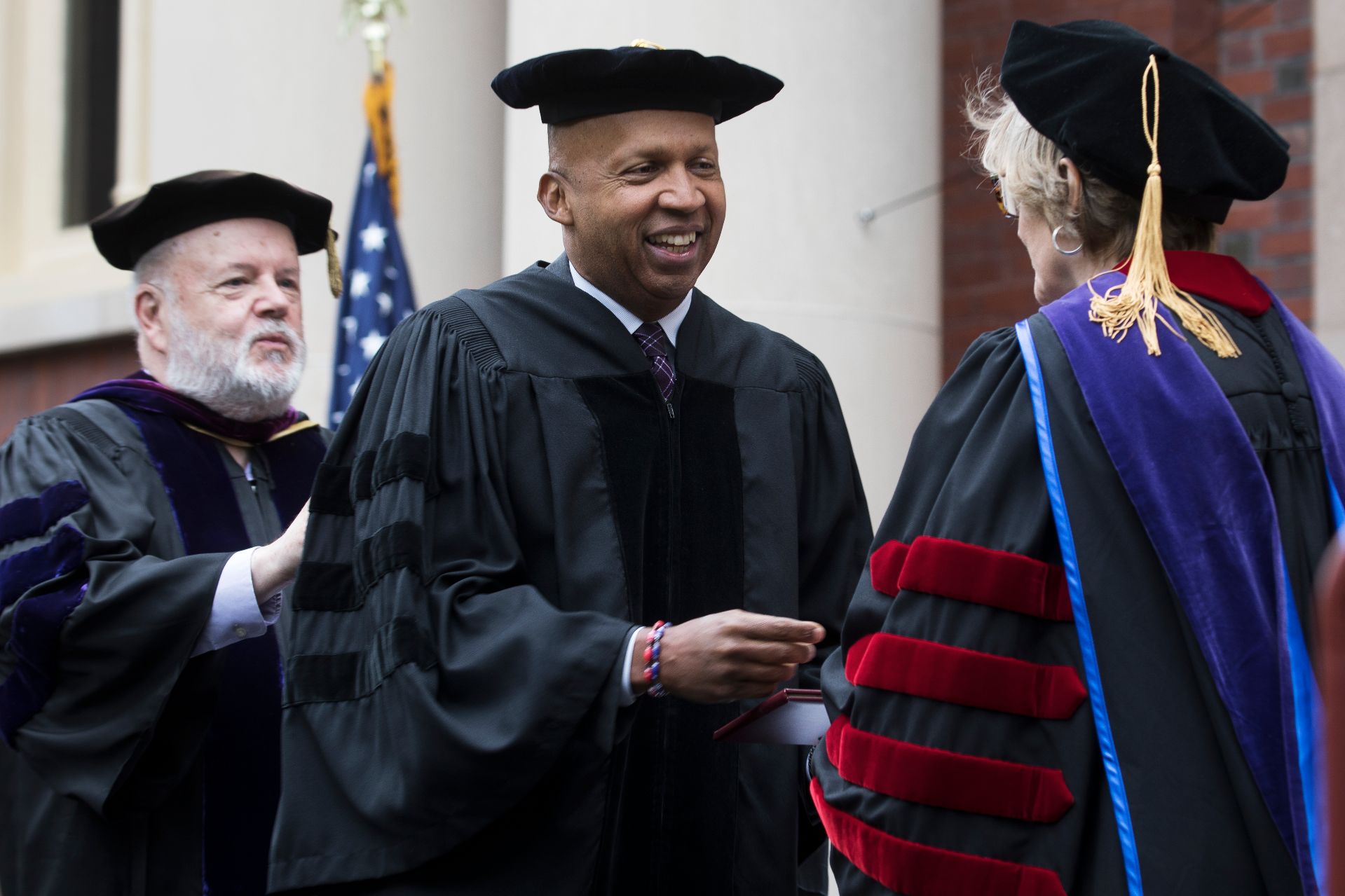 Which isn’t to say comfort has no place at all in the good fight. In one of a number of stories that leavened his talk, Stevenson recounted arriving in a Mississippi town where he was going to speak. He was greeted by event sponsors who had inferred from his rigorous approach to justice work that he wouldn’t want to be coddled by staying in “the luxurious Double Tree Inn.”

“I said, ‘What is wrong with you? Of course I want to stay in the luxurious Double Tree Inn,’” he replied. “I like those chocolate chip cookies just like everybody else.” 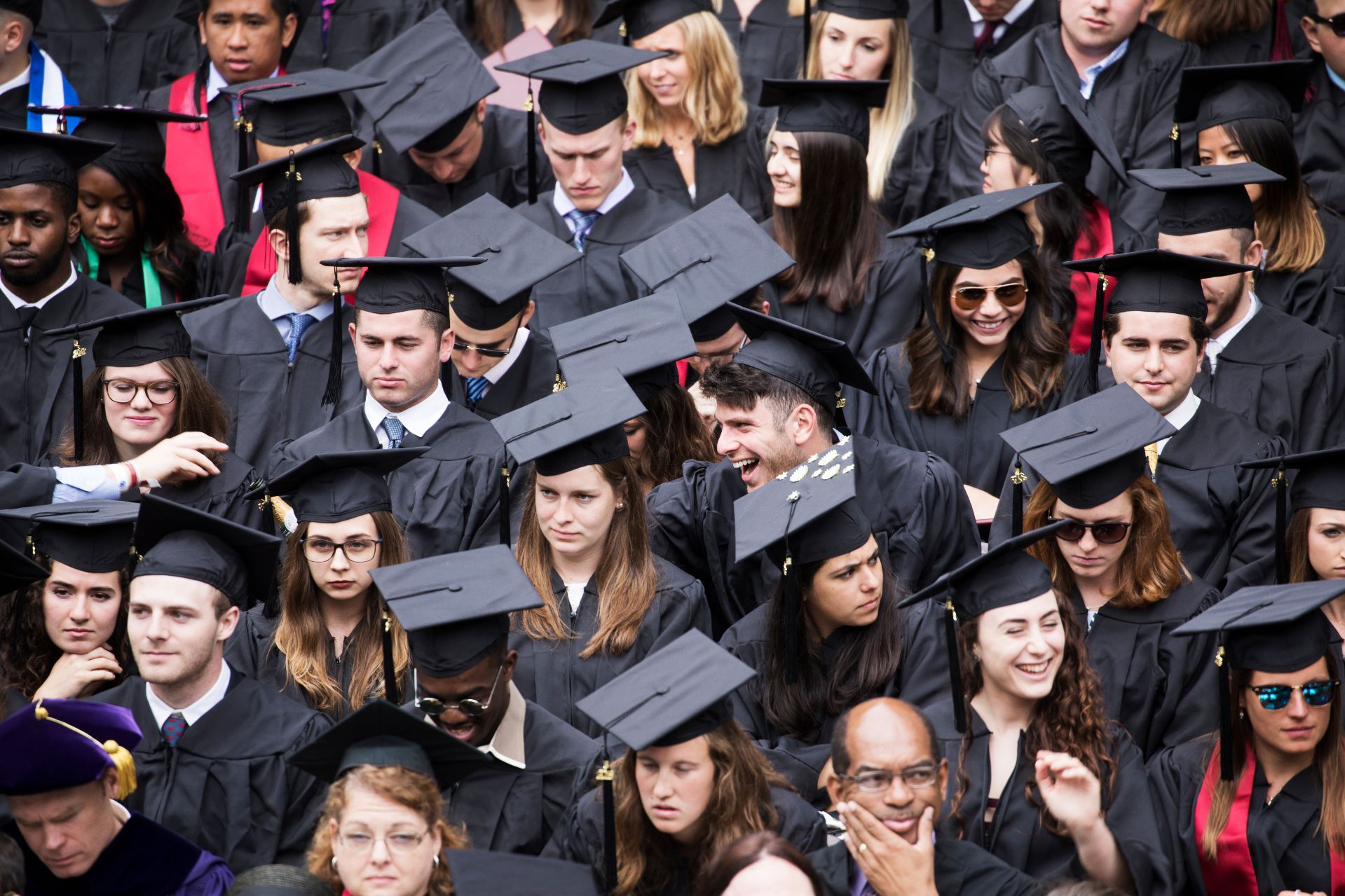 The many emotions of a Bates Commencement are seen on May 27, 2018. (Theophil Syslo/Bates College)

If we’re going to effect meaningful change, Stevenson concluded, it can’t be measured “just by looking at how well we treat privileged people and powerful people and celebrated people. Our true test, our true reflection is going to be measured by how we treat poor people, excluded people, marginalized people, disfavored people.” 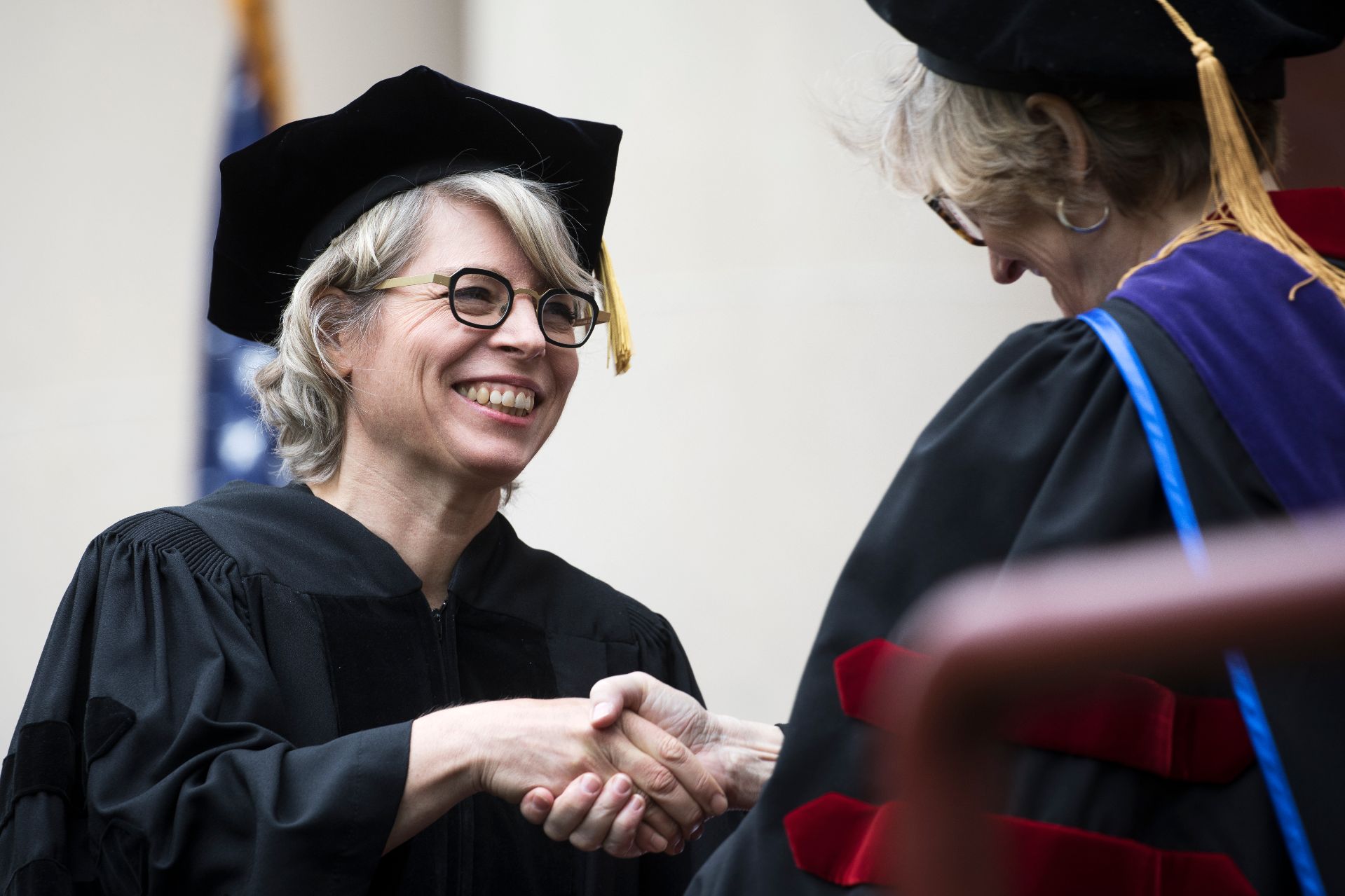 Jill Lepore receives an honorary Doctor of Humane Letters degree during Commencement at Bates College on May 27, 2018. (Theophil Syslo/Bates College)

In her welcome, Bates President Clayton Spencer presented a few facts about the graduates-to-be. The 473 seniors, she pointed out, represent 39 states, plus the U.S. territories and District of Columbia, and 42 other countries.

One in nine was the first in their family to graduate from college. Two-thirds of the class studied abroad, 20 percent are double majors, and 41 individuals received departmental honors for a yearlong thesis. And 13 — plus two recent alumni — received 2018 Fulbright fellowships. 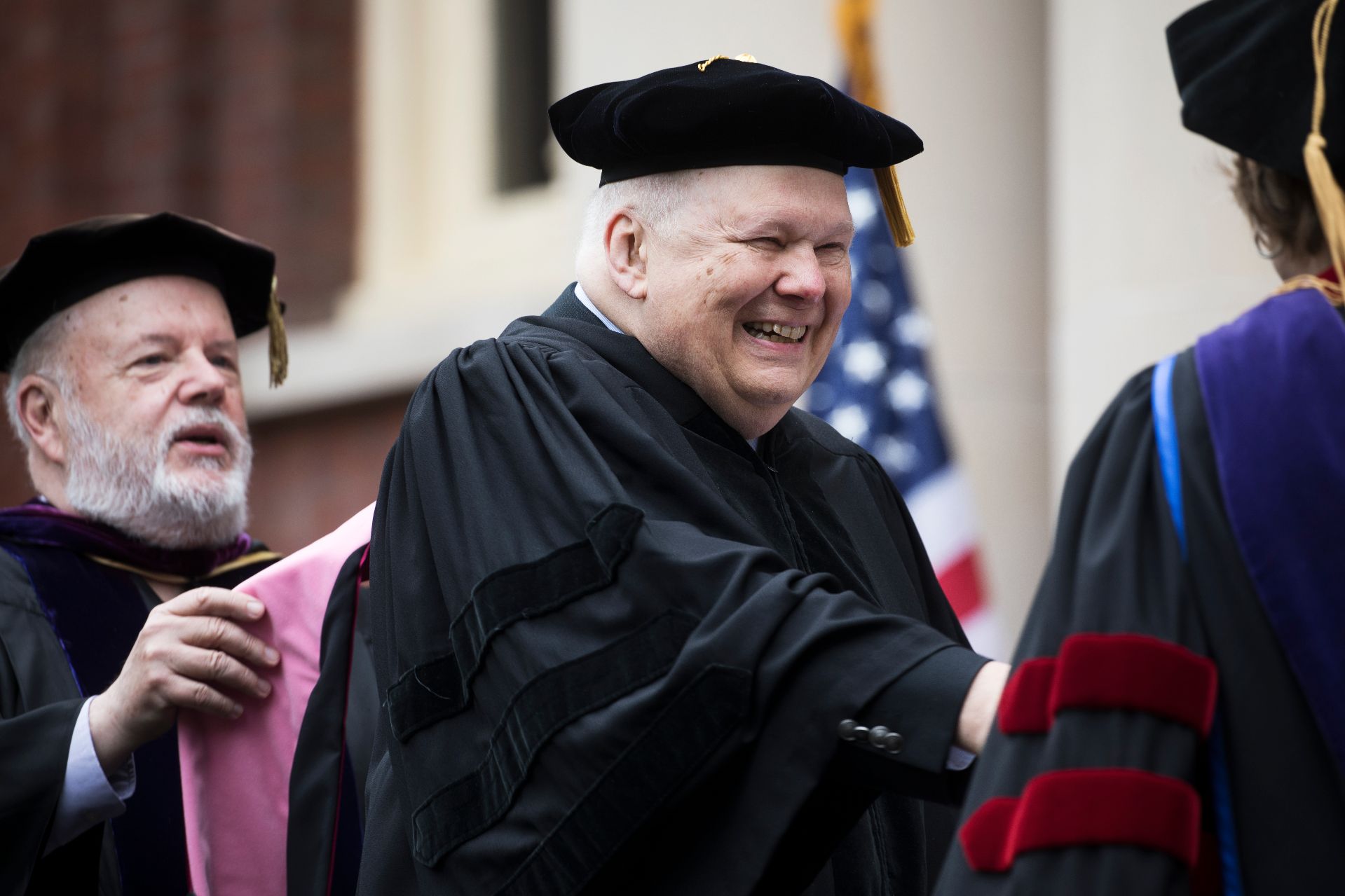 Senior Gift Committee chairs Pratap Khadka and Ainsley Jamieson reported that the committee raised $6,450 dollars from 398 members of the Class of 2018 — reaching the goal of 84 percent participation.

Just before the Atlantic Clarion Steel Band sent the new graduates and their loved ones dancing away toward a campus picnic and their next chapters of life, Multifaith Chaplain Brittany Longsdorf offered a few words of blessing:

“Remember that you are capable of incredible feats,
You are strong and courageous,
You are a piece of something expansive and transcendent.” 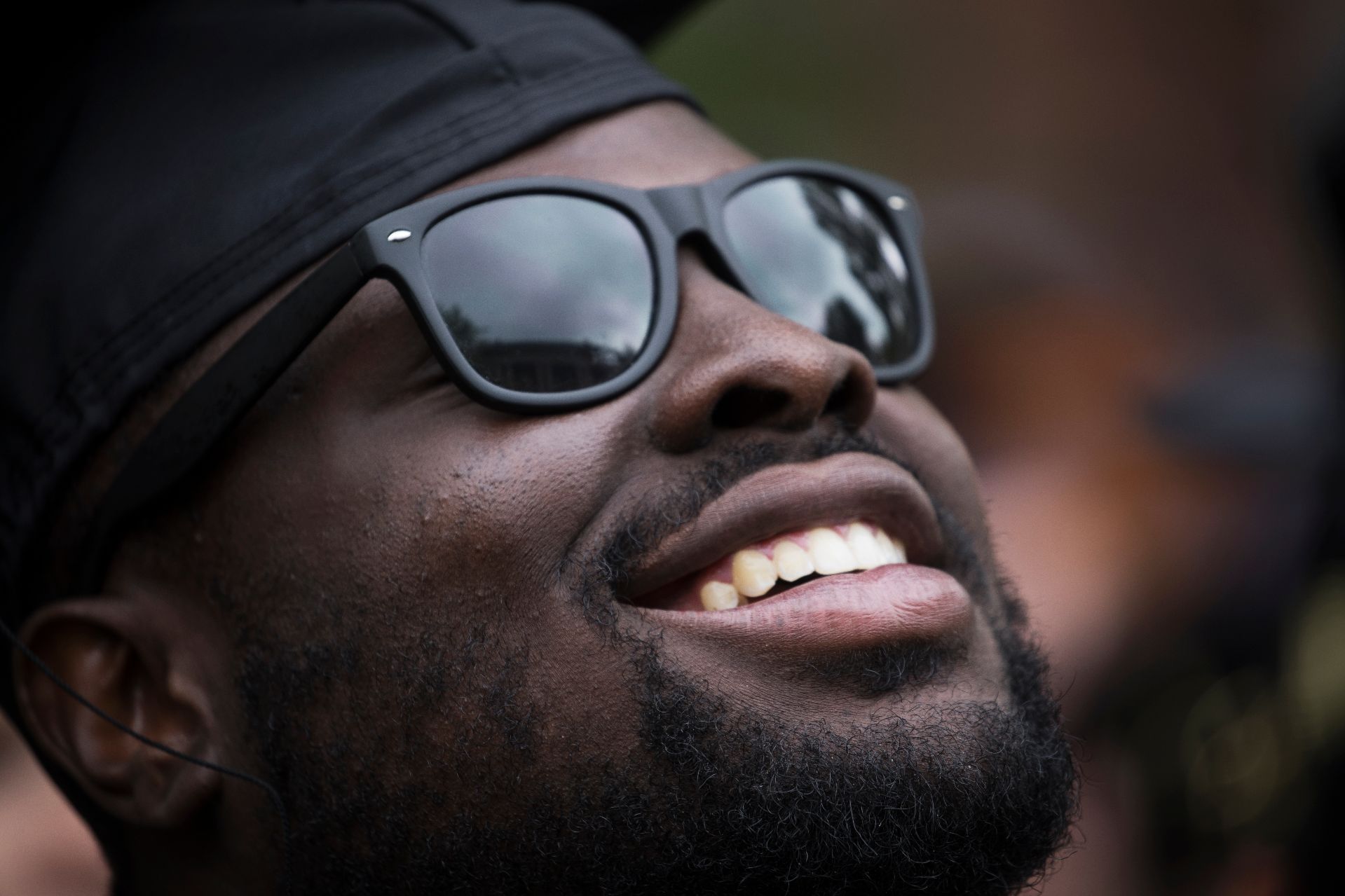 Picture story: Baccalaureate for the Bates Class of 2022