Despite a recent headline-making report from its board of trustees, we needn’t worry about the Social Security trust fund going broke by 2034, according to a Penn sociologist and Bates alumnus.

And why not? “It’s already broke,” according to Richard Gelles ’68. “It’s been broke for 30 years. And what the government has done is, first, continued to pay your benefits out of tax receipts and debt, and second, played politics by scaring the hell out of you.”

Gelles offered his 50th Reunion classmates a June 8 presentation challenging the assertion — expressed in the trustees’ annual report for the second year in a row — that benefit payments will outstrip the Social Security Administration’s funding source in 16 years. 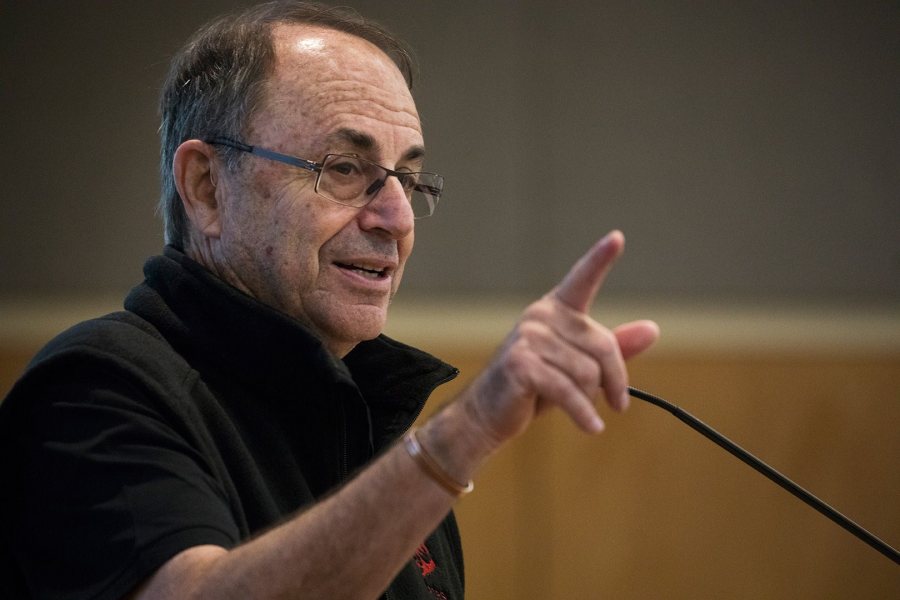 Rich Gelles ’68, a renowned Penn sociologist, makes a point during his presentation on Social Security during Reunion on June 8.(Theophil Syslo/Bates College)

For their achievement in hitting the 50-year mark, Gelles’ classmates got to hear from a national expert. He is the author of The Third Lie: Why Government Programs Don’t Work — And A Blueprint for Change (Left Coast Press, 2011). Widely known for his research into domestic violence, Gelles is the Joanne T. and Raymond H. Welsh Chair of Child Welfare and Family Violence in the University of Pennsylvania’s School of Social Policy & Practice.

If the trustees’ report is misleading, Gelles noted, Social Security is by no means problem-free. But its problems are not intractable, and there are ways to address them (he discussed six, each with its own particular baggage) given the political will.

But first, a little history. Established as a “pay-as-you-go” system in which a dedicated payroll tax was channeled directly into benefit payments, the model was changed in the early 1980s in response to a looming federal budget crunch.

“There is a relatively simple solution to this hypothesis. It’s called immigration.”

Among other revisions, the payroll tax was increased to build a trust fund surplus. This surplus was required by law to fund general federal spending, in exchange for interest-bearing bonds — “IOUs,” Gelles called them — redeemable at any time by the Social Security Administration.

The surpluses began in 1984 and are projected to continue into the early 2020s, at which point it’ll be necessary to start liquidating the bonds to meet benefits. And what will happen next, theoretically by 2034, is that all these funding sources together, payroll taxes plus the principal and interest from the bonds, will start to fall short of fully covering benefit payments. 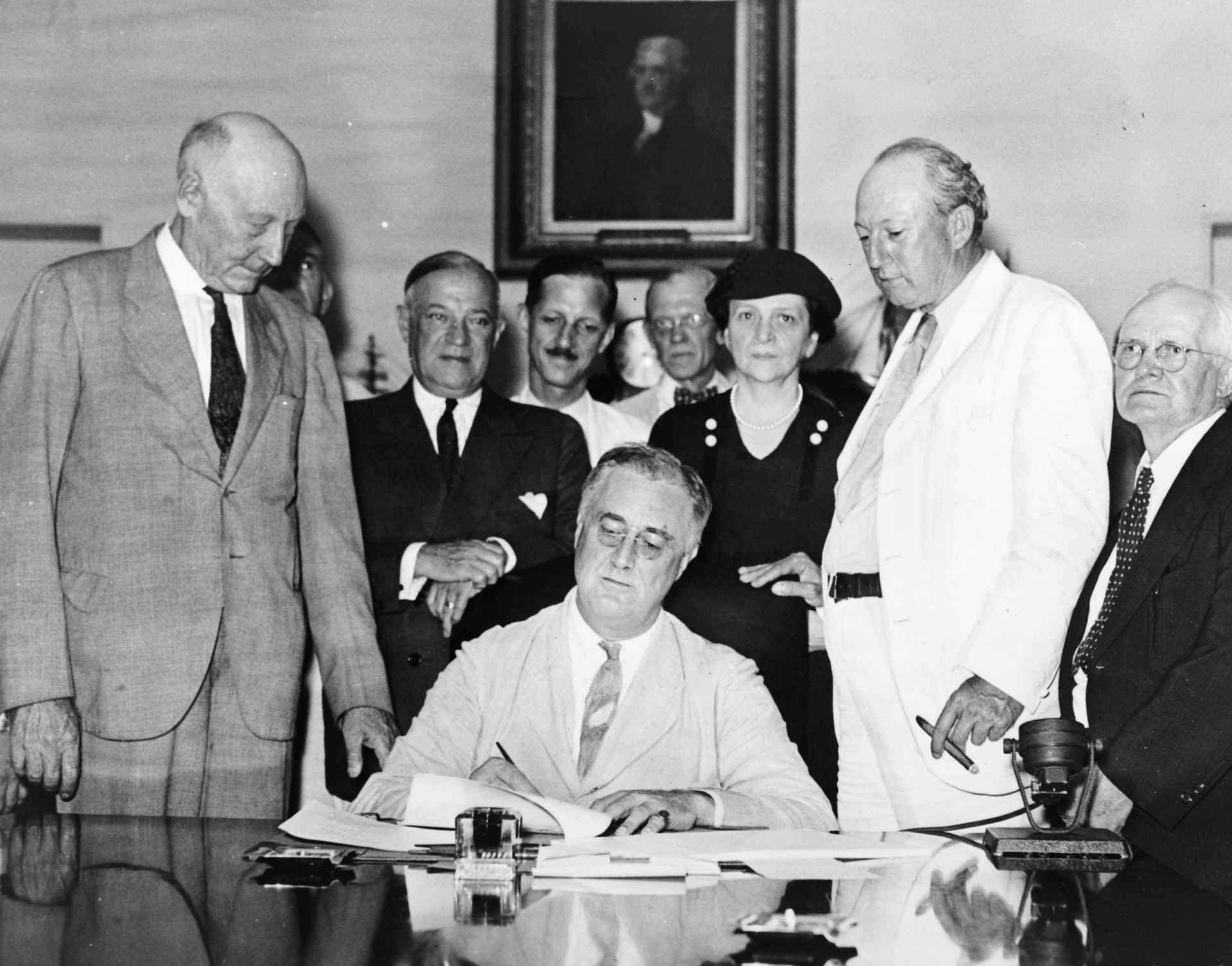 President Franklin D. Roosevelt signs the Social Security Act on Aug. 14, 1935, surrounded by members of Congress. The woman behind Roosevelt is Frances Perkins, who was the first U.S. Secretary of Labor and the architect of the New Deal — including Social Security as well as the 40-hour work week, child labor laws, unemployment insurance, workers’ compensation, and more. (Library of Congress Prints and Photographs Division)

Then the federal government will have a huge financial obligation “that by law it must still pay,” Gelles explained. “The government will have to take on greater debt than it is taking now … And the [federal] deficit is going to go up, given the tax cuts that we implemented last year.”

Another structural problem facing Social Security is demographic and well-known: The number of workers who pay the taxes to fund the benefits will decrease even as the number of beneficiaries — notably the demographic bulge that is the baby boom generation — increases.

“There is a relatively simple solution to this hypothesis,” Gelles said. “It’s called immigration.”

“The educational system in large cities is so dysfunctional that we’re not creating enough productive workers.”

Conversely, he said, “if we crack down on immigration, we’re going to create two problems. One, we’re going to cap Gross National Product growth,” probably at around 2 percent. “And two, we’re exacerbating the [Social Security funding] problem.” That shortfall, Gelles said, “really goes away if you increase the workforce.”

Because it takes at least 18 years for someone born here to become a full-fledged member of the workforce, encouraging immigration offers the quickest way to increase that resource. In Gelles’ words, opening up immigration is the “low-hanging fruit” in strengthening Social Security.

Another potential measure to enlarge the workforce seems, especially in the current political and social climate, like another heavy lift: Improve the educational system so that there are more qualified workers.

“The educational system in large cities is so dysfunctional that we’re not creating enough productive workers,” Gelles said. “But that’s infinitely more complex than fixing immigration.”

He said, “The cost-of-living is significantly lower for those of us in our 60s and 70s than it was when we were starting out in the workforce. To apply a 30-year-old’s cost of living to a 70-year-old overestimates what we need.”

Raising the age of eligibility for Social Security, which was one of the measures taken in the early ’80s, would also help stretch the trust fund. But as Gelles pointed out, it would cause hardship among less-affluent retirees. 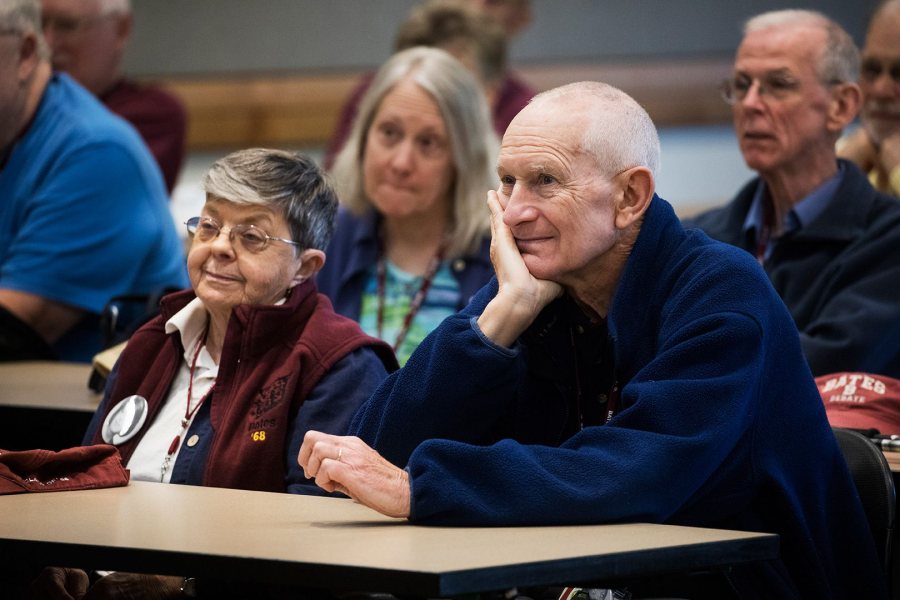 “If you’re in the top 10 percent of wage earners, it’s not going to affect you that much” to wait a year or two longer. But Social Security benefits will come as a necessity, not a bonus, for many retirees.

How about raising the level of wage-earners’ income subject to Social Security taxes? It helped in the 1980s and could help again — if you could sell it. Currently capped at $128,700, it already encroaches on the top 10 percent of earners, Gelles pointed out. “If you continue to move it up, you’re going to begin to lose political support for Social Security.”

“So go home, enjoy your Social Security, don’t pay that much attention to government reports.”

Conservatives continue to tolerate Social Security because the program is seen not as welfare or an entitlement, but as a form of social insurance. People in the political middle and fiscal conservatives such as Gelles don’t want to see it morph from a social insurance program to a wealth-transfer mechanism.

“The minute it becomes viewed as an entitlement or another form of welfare, you’re going to lose a tremendous amount of political support.”

The remedy most likely to succeed in today’s Congress is an increase in the Social Security tax rate, currently at 12.4 percent per individual, paid half-and-half by employees and employers. “Congress likes regressive taxes more than progressive taxes,” Gelles noted — progressive taxes being those that increase in proportion to taxpayers’ income, and regressive being the ones that less affluent folks feel the most.

“So go home, enjoy your Social Security, don’t pay that much attention to government reports,” Gelles reassured his classmates. “Even CNN got this wrong.”