It’s July 24, and Keene and Gillett are at a counter under a window in Commons. Keene scrutinizes the big yellow blossoms in a black plastic bin. “There are no bees?” he jokes.

Nope, no bees nor any other critters. Just a few minutes prior, in fact, Gillett and classmate Katharine Gaillard had inspected the blossoms in the field where they were grown, a block away from campus. That was part of a routine Gillett and Gaillard, interns for Bates’ new garden, have developed as they fine-tune deliveries of the vegetables they’ve been tending since spring. 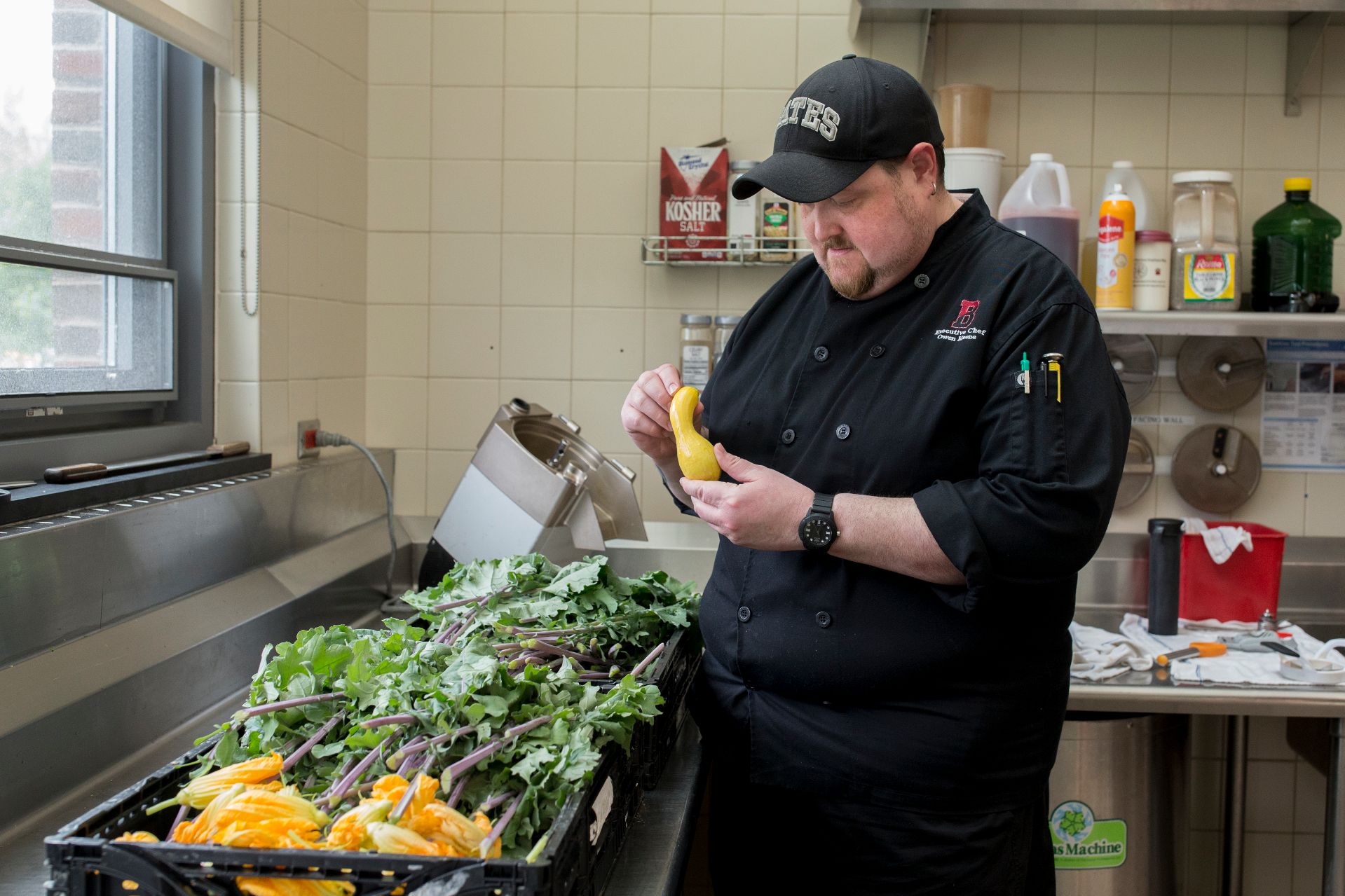 It’s early in the summer harvest season and today’s delivery is just the third the interns have made to Commons, their sole customer. In addition to a few summer squash and many blossoms (delicious when stuffed, battered, and fried), the delivery includes nearly 13 pounds of kale and four pounds, 12 ounces of tomatoes across four varieties.

Dining Services and the Bates EcoReps established the fifth-acre garden, formally called the Plot, this year as an educational program. Garden interns like Gillett and Gaillard get hands-on experience with commercial and sustainable food production practices — and the campus gets a working farm, albeit a tiny one, that one day will also serve as classroom and lab. 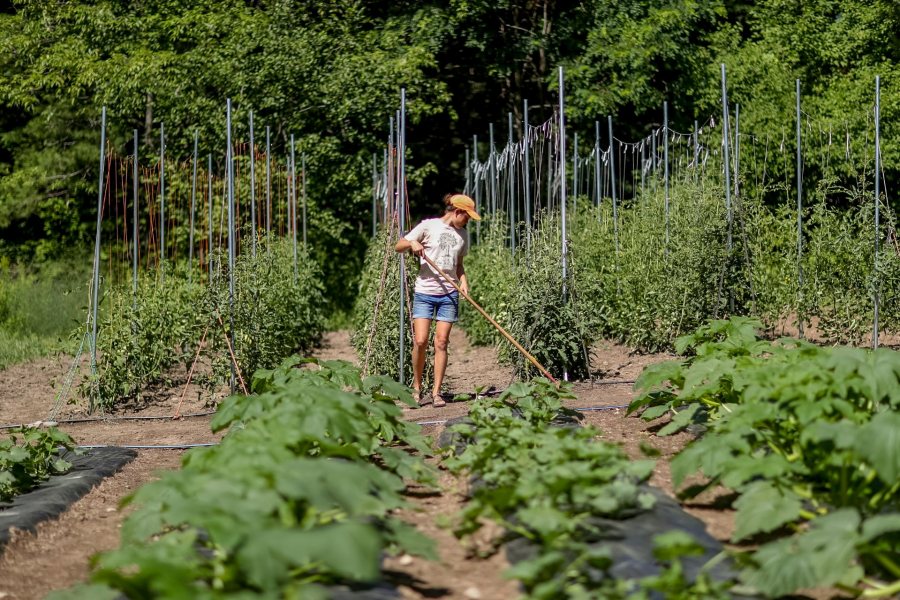 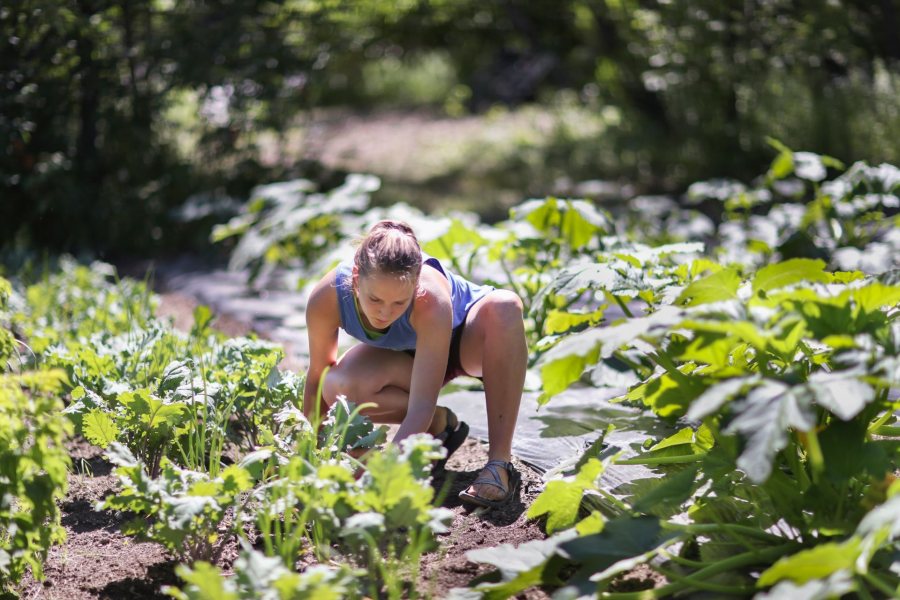 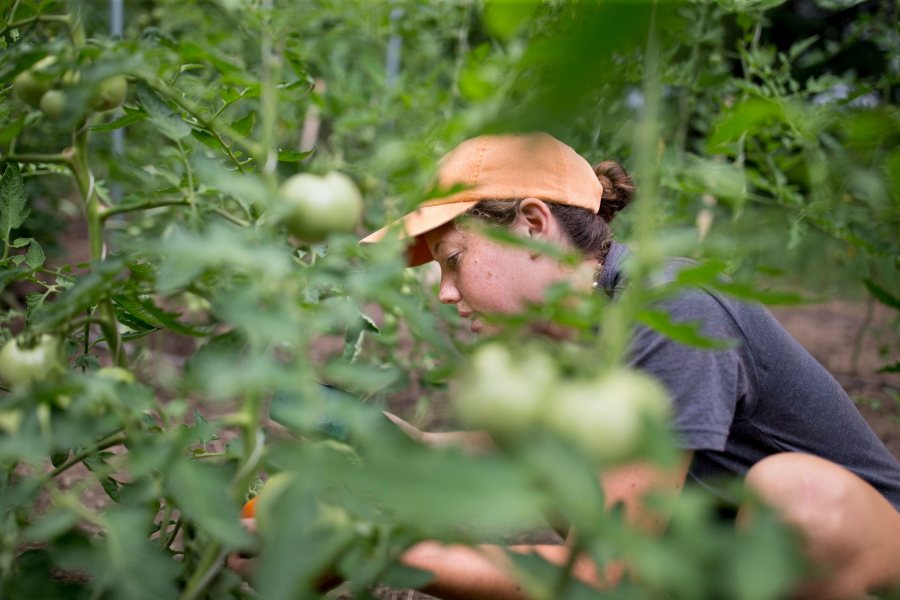 The Plot has come a long way since last spring, when EcoReps and volunteers carved it out of an acre and a half of unused, overgrown college land. This summer’s cash crops occupy two big beds in the sunniest portion, and the visual centerpiece is the tomato patch, whose 180 or so plants are trained to climb strings to tall overhead supports.

The other bed supports some 45 squash plants, 60 cucumber, 60 onion, and 50 Red Russian kale. Both beds are equipped for drip irrigation, and a mesh fence keeps hungry animals away from the tomatoes. Young berry bushes and apple trees line an edge of the clearing. A screen of wild trees, thick here and thin there, was left to provide some concealment.

Gaillard, a politics major from Boston, and Gillett, an environmental studies major from Seattle, brought their first harvest over to the dining hall on July 19. That was a couple of pounds of tomatoes. The second delivery was almost four pounds of tomatoes, and the third was the first to include other crops. 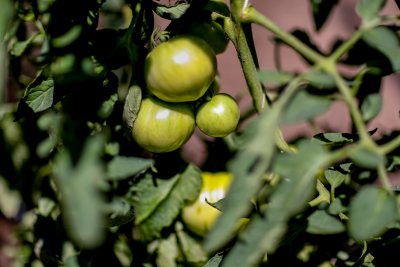 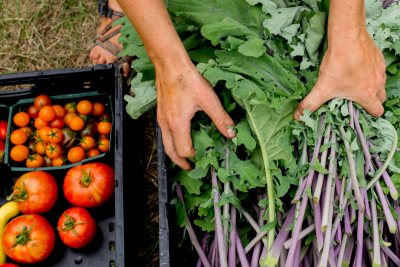 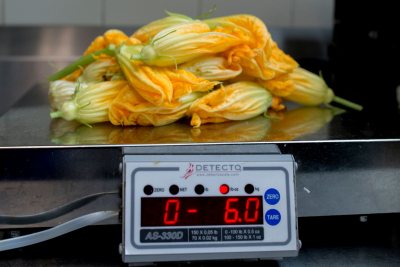 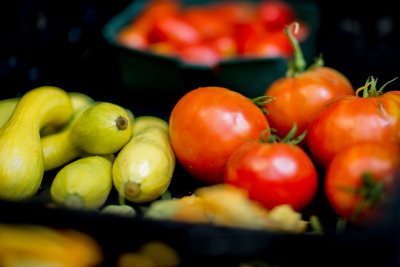 Farmers’ woes are numerous, but the Plot has had little trouble so far: just a row of non-thriving onions, blossom-end rot on several paste-tomato plants (which they have since outgrown), and a few chewed-up tomatoes, probably by squirrels.

The interns spend about 20 hours a week tending the Plot. “Katharine runs a very tight ship in terms of weeds, so we never have to weed for that long,” says Gillett. “That’s like maybe 40 minutes a day. And if we need to trellis the tomatoes we’ll do that. And then recently we have been working on projects.”

The projects are bent toward making the entire 1.6 acre site more farmer-friendly. For instance, Gaillard recently spent a day hacking out a new, easier-access path into the Plot. (Philip Dostie, assistant in instruction in geology and a frequent Plot volunteer, wielded power tools in aid of that project.) 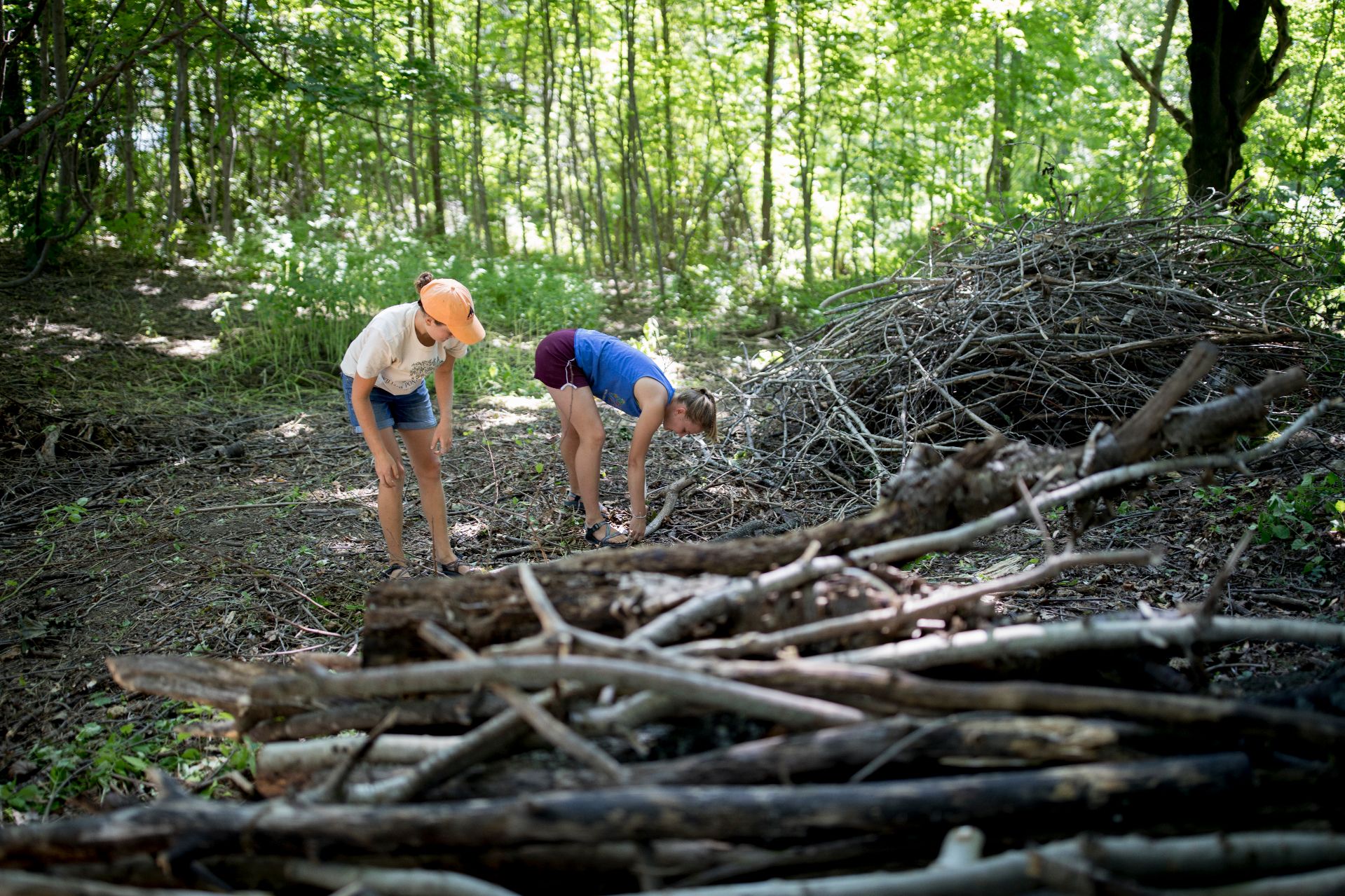 In addition to tending the active vegetable beds, Gaillard and Gillett dedicate a portion of their time to organizing other sections of the 1.6 acre garden site. (Phyllis Graber Jensen/Bates College)

Both women have removed brush and tree debris from a shady portion of the site, with an eye to expanding the sunlit area in the long term (and maybe starting a mushroom bed in the meantime).

Gaillard’s and Gillett’s hours off the Plot tend to be likewise agricultural. Gillett is doing senior thesis research at the nonprofit, community-focused Whiting Farm, in Auburn. She’s studying ways that soil is improved by so-called companion planting, where different types of plants benefit from being grown right next to each other.

The best-known companion planting method may be the old Native American practice called “three sisters,” where beans, corn, and squash are planted together. And that’s what Gillett is researching, with a focus on beans’ ability to fix nitrogen, a plant nutrient, in the soil. 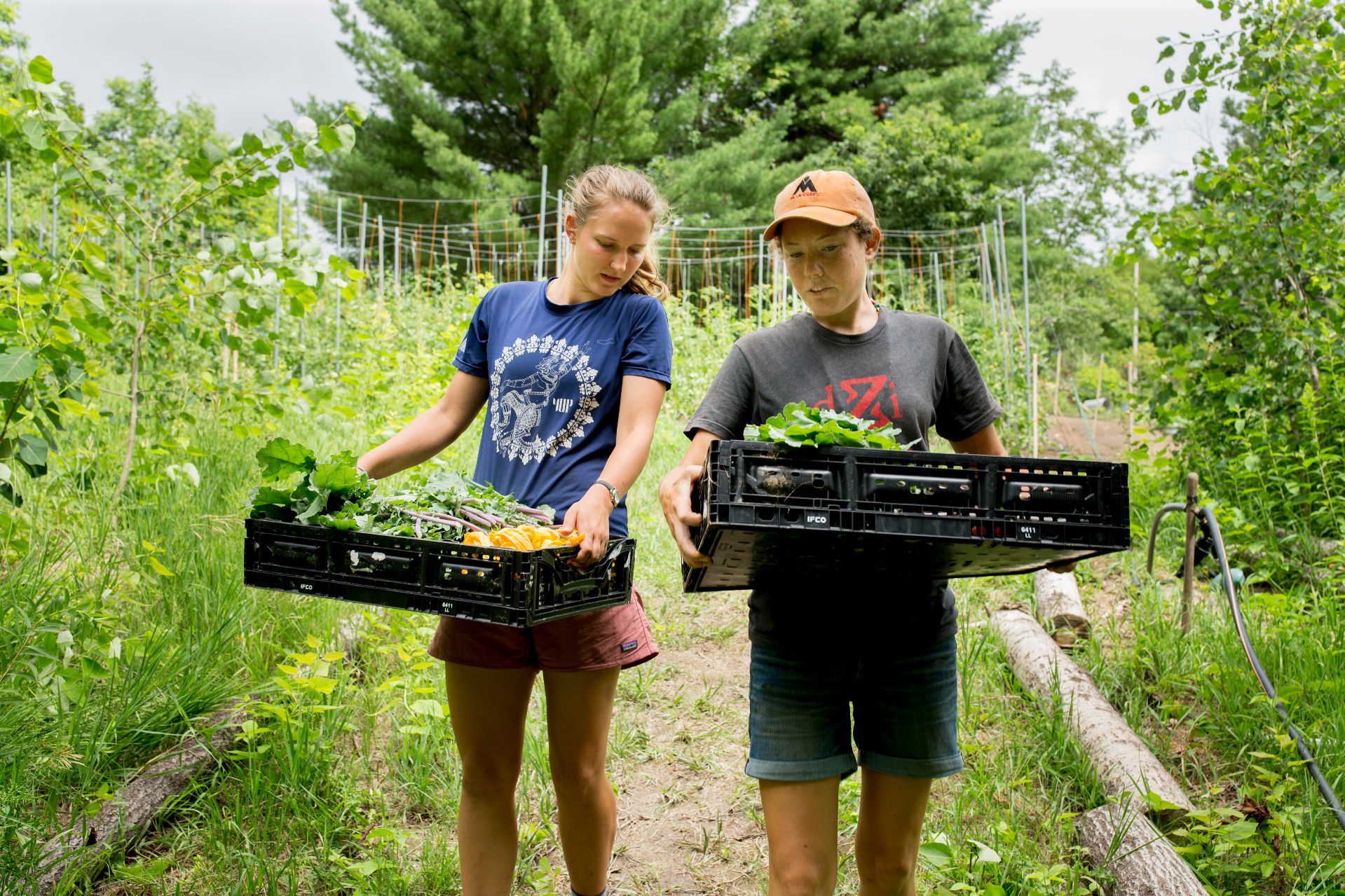 Gillett and Gaillard with an early harvest from the Plot. (Phyllis Graber Jensen/Bates College)

“There’s a lot of anecdotal evidence, but not a lot of scientific data,” she says. Her many sisters haven’t grown quite enough yet for testing, she notes — “right now, I’ll weed here and then I go weed there.”

Living off campus, both students are getting their own vegetables from community-supported agriculture shares. Gaillard is earning hers in the field, at Willow Pond Farm, in Sabattus. (An adviser to the Plot, Jill Agnew and husband Charlie Agnew of Willow Pond were the first Maine growers to create a CSA shareholder program for direct-marketing to customers, in 1989.)

Gaillard’s roommates are fellow students whom “I didn’t know super-well until this summer,” she says. “So it’s been fun just getting to know them. And cooking a lot with our fresh produce. There’s nothing like it.” 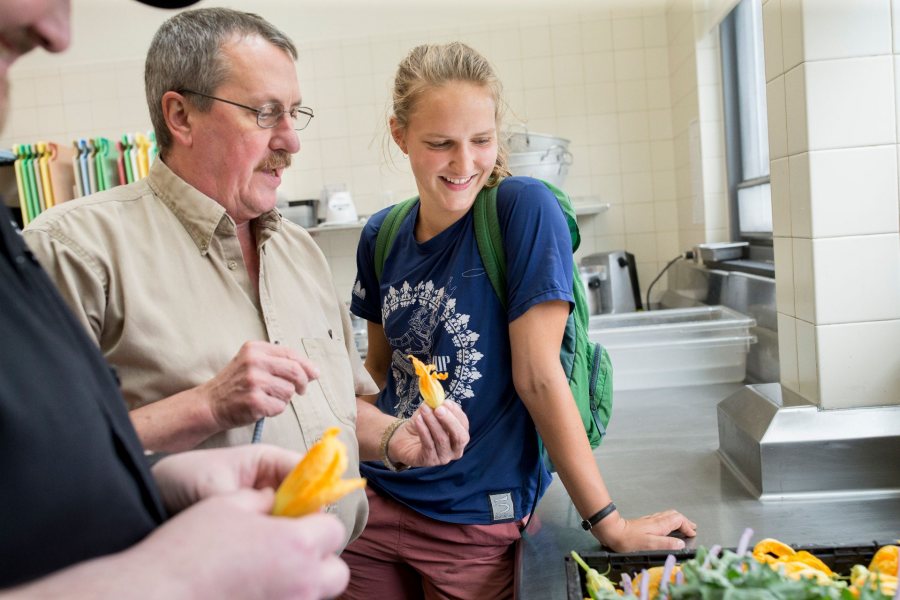 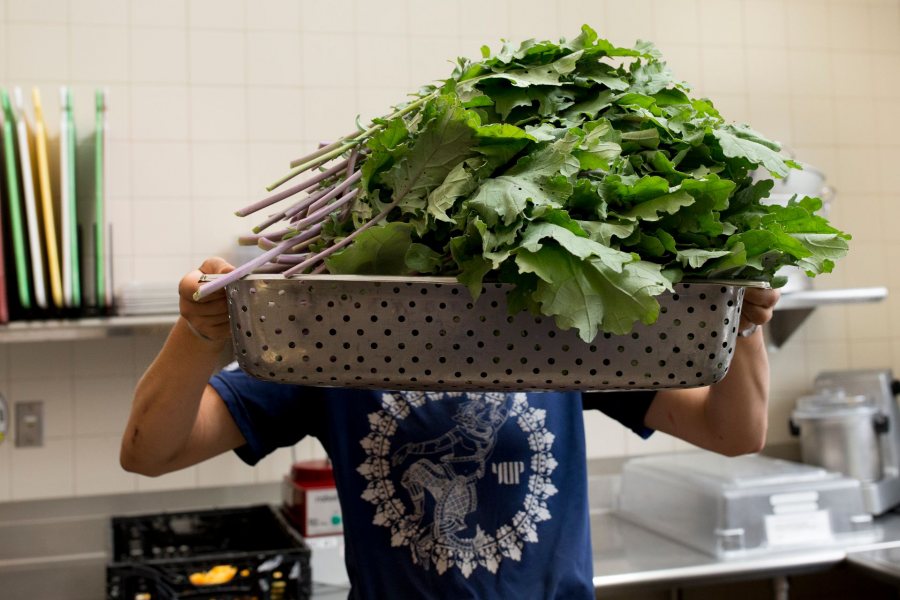 Presenting the harvest in Commons. Above left, Executive Chef Owen Keene (foreground) and operations director Ken Smith discuss a bin of kale and squash with Gillett. Above right, Gillett maneuvers 13 pounds of kale toward a sink for rinsing. (Phyllis Graber Jensen/Bates College) .

Tending the same ground day after day can sharpen one’s appetite for new prospects. If their daily routine at the Plot is harvesting, weeding, and bringing squash blossoms, etc., to the Dining Services kitchen crew, both Gaillard and Gillett are acutely aware of growing the Bates garden in other ways as well, physically and conceptually.

“We’ve gotten everything in the ground, we’ve started harvesting, and it’s sort of maintenance work with the actual plants at this point,” Gaillard says. So now what?

Maybe expand the sunny area and put in cold frames in time for fall and cool crops like lettuce or spinach. And then there’s always the greater mission of the garden, its educational potential.

“How are we going to involve all the students when they come back? And what is that going to look like?” Gaillard wonders. “So just when one thing is taken care of, a whole other thing comes up.

“I’m really hoping that it continues. And having this be the start of it all is probably the most exciting part — it’s only going to grow and get more exciting as things go on.” 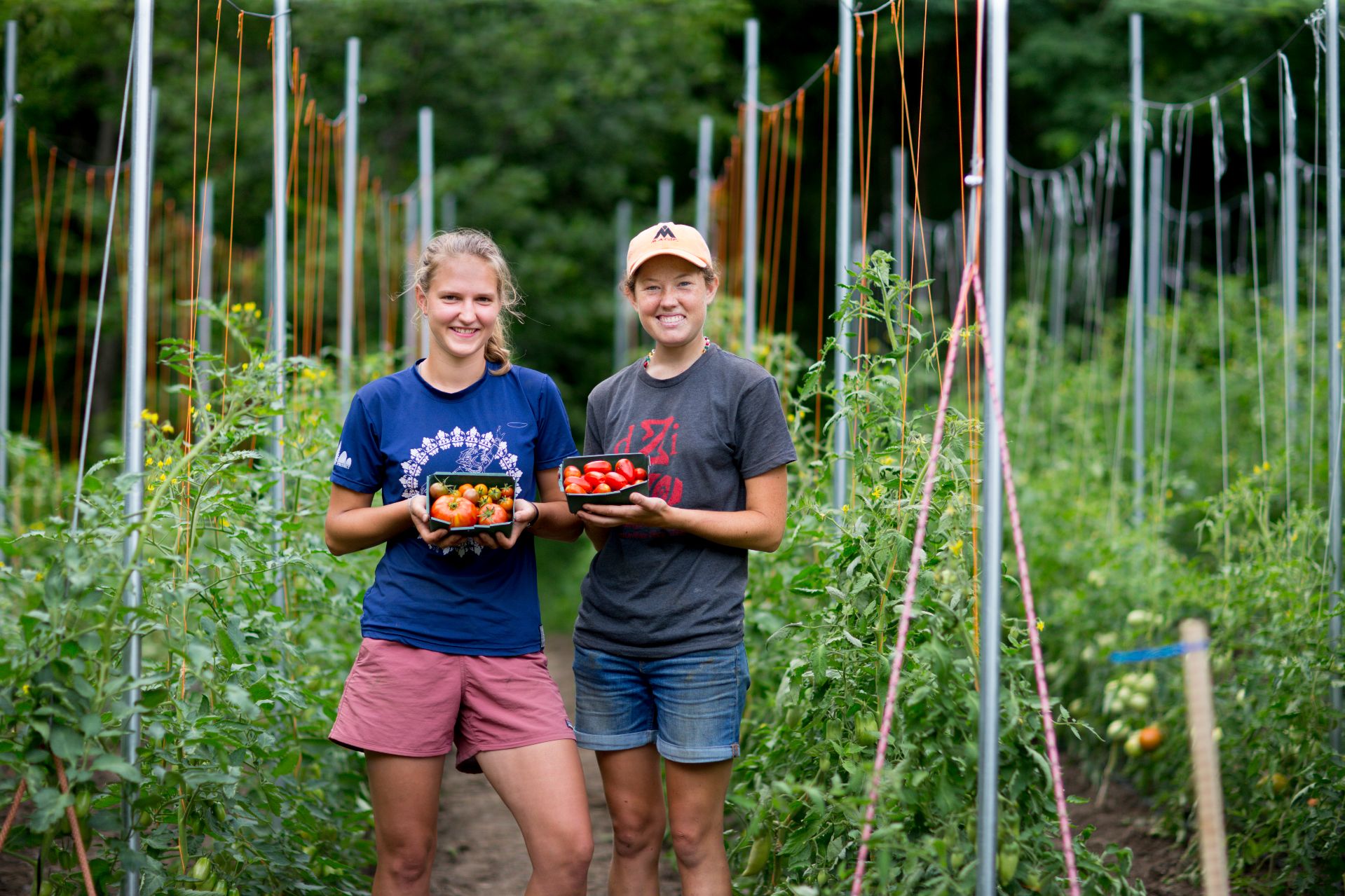