At the start of their child’s college hunt, parents tend to speculate about their children’s prospects for career and happiness.

But in the weeks and days before the start of college itself, they start drilling down to the basics.

Carrie Murphey ’06, assistant dean of students for first-year experience and housing, is a prime mover in the activities during and around Opening Day and Orientation. When she hears from parents and family members of new students during the summer, it’s often about issues like, “’They’ll need to know how to do laundry!’ or ‘What if they need a snack and the dining hall is closed?’”

Such concerns only make sense. “They’re watching their child live at home, and then feeling like, ‘Well, what will that look like at college?’”

Nevertheless, there’s only one answer to questions like that, Murphey says: “Their students won’t know until they’re here, and they can begin figuring it out for themselves.” 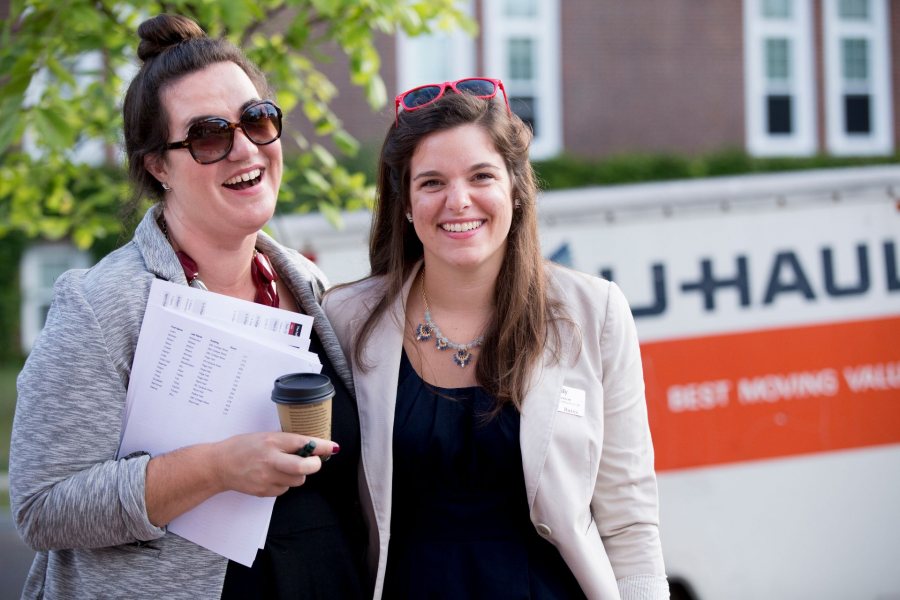 A prime mover in the activities during and around Opening Day and Orientation, Carrie Murphey ’09 (left) poses with Molly Newton ’11, assistant dean of students for residence life and health education, on Opening Day in 2016. (Phyllis Graber Jensen/Bates College)

In fact, of all the ways parents can support their newly fledged students, one of the most valuable is easing back and trusting them to figure college out — and to trust schools like Bates to help them do that.

In her chats with family members, Murphey says, “I’ll try to include phrases like, ‘What I would tell your student if they called,’ or ‘What your student might hear from me is —.’”

“It’s important for parents to step back so that their children can develop their own strategies for problem-solving.”

The important point is that “the developmental process of college is students emerging further into their self-advocacy. There shouldn’t be anything that a parent or family member can get for their student that the student can’t get for themselves,” she explains.

“We recognize and embrace parent and family members as integral to the experience” — but it’s “really as support for their student’s experience.”

Bates parent Genny Allard agrees. “It’s important for parents to step back so that their children can develop their own strategies for problem-solving.” More instructive than supplying answers, she continues, is “encouraging them to find the resources they need on campus to make their own decisions.

“Acting as a guide on the side is really the role of a parent of college kids.” 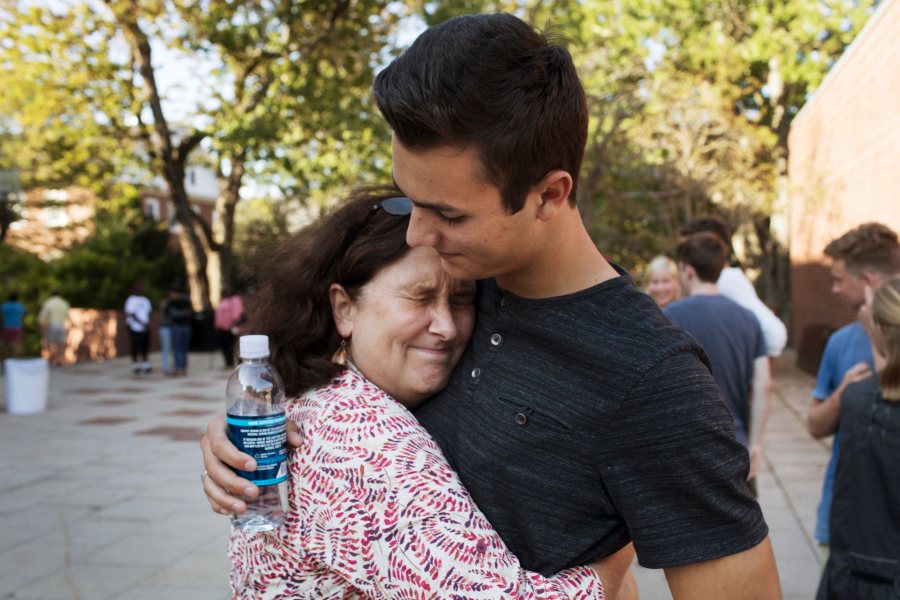 In three words, Angela Church, the mother of Maya Church ’20 of Atlanta, conveys the  internal conflict that parents feel. On the eve of Maya’s matriculation, she said that she and her husband felt “proud, thrilled, and nervous.”

The first two words were because Maya would venture far from the familiar South for the school of civil rights leader Benjamin Mays, who graduated from Bates exactly 100 years before Maya’s anticipated graduation date. And “nervous” because she wondered “how Maya would manage the cold weather and when she would get homesick.”

So Angela and her husband responded by looking outward and inward, “by calling Maya everyday, sending special care packets, flying her home for holidays, and most importantly, praying that Maya would have an outstanding college experience.”

Even as a child gains independence and maturity, parents often still see the vulnerabilities and uncertainties that remain. For Ed Walker ’02, who was a Bates student when his daughter, Tiauna Walker ’21 of Millbury, Mass, was born, he saw the things that “that I’ve spent her whole life trying to shelter her from,” such as the dangers of alcohol. 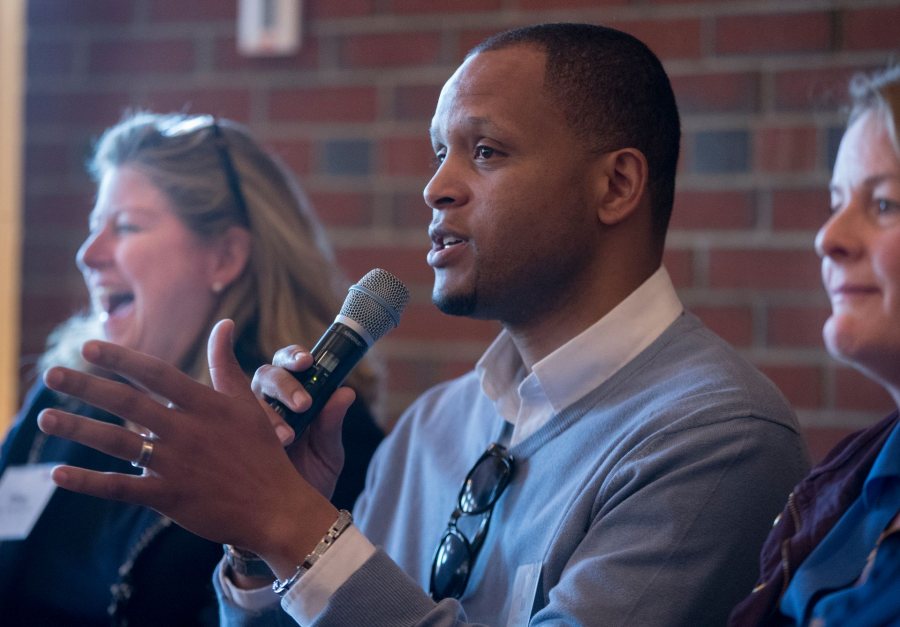 Ed Walker ’02 speaks during a Q&A session for parents held in April during an Admitted Student Reception in the Mays Center. At left and right are parents Missy Moreland and Genny Allard. (Phyllis Graber Jensen/Bates College)

To allay those worries, Walker has learned to “trust. She is a young woman now, and I’ve had to come to terms with that. And I have strong comfort in knowing who she is as a person,” he says.

As Tiauna looks ahead to her sophomore year, that trust has “allowed our relationship to get stronger,” Ed says. “She talks to me much more openly now, I think. She still checks in with me often and she solicits my advice on a lot of things regarding her academics and just her personal life.

“Most importantly, at least to me, is that she still shows the utmost respect to herself, which was a foundational lesson for her. As long as she’s doing that, there’s not much more I can really ask for.”

College as a developmental process for parents and students alike is also on the mind of Rebecca Fraser-Thill, a member of the psychology faculty and the director of faculty engagement and outreach for Purposeful Work at Bates. 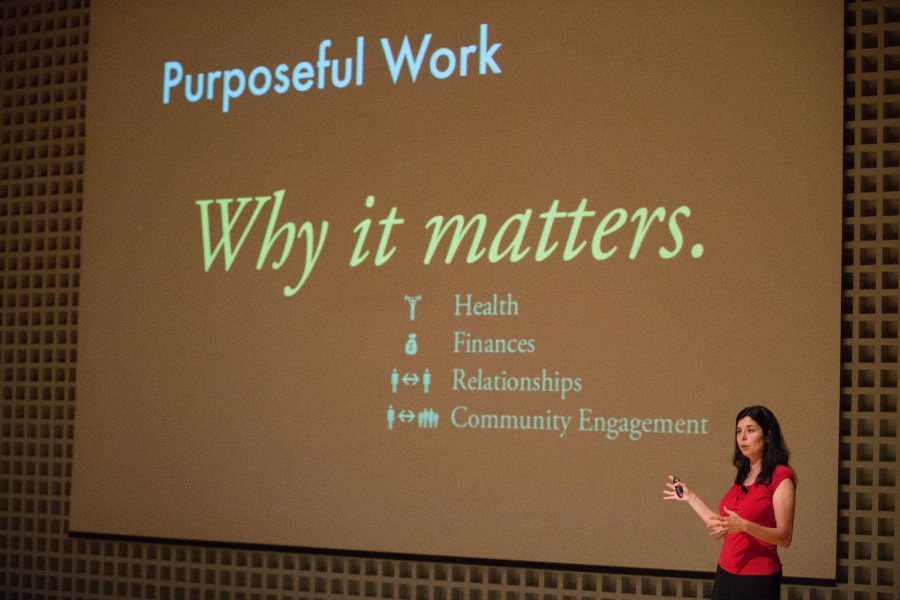 She says that the “guide on the side” concept dovetails neatly with the goal of Purposeful Work: helping students gain self-knowledge that can enable them to align who they are with work that will satisfy them — and bring them happiness after college, every parent’s hope.

Now beginning its fifth year of implementation, Purposeful Work has a parent focus. The first year in college, and even the first weeks, “are about setting students up for feeling purpose and meaning in their work,” says Fraser-Thill.

Encourage your student to range around — and be sure to reflect back to them the things that worked and those that didn’t.

She says, “Something that, often, is a tension point early on is when parents encourage narrowing, by and large, faster than we as a liberal arts institution would encourage it.” Instead, encourage your student to range around — and be sure to reflect back to them the things that worked and those that didn’t.

And while you’re being encouraging, help yourself to some of that too, Fraser-Thill suggests. “Being easy on yourself as a parent is really key to the whole process as well — understanding that it’s a developmental journey for you, as much as it is for your child.”

Allard recalls the time, a few weeks before she launched her son, Jack, on his college career in 2012, that she got a phone call from the mother of a Bates senior. It was a welcoming phone call, initiated by Bates as a way for veteran Bates parents to reach out to new ones — but it was also a call that Allard welcomed as she contemplated her concerns about sending Jack off.

“She honestly alleviated any silly concerns I had,” Allard laughs. “He was only going to Maine, not the moon.”

She and the caller “talked honestly about the concerns mothers have for their children who head off to Maine to college,” says Genny, who teaches at a New Jersey high school.

“This mother was also from New Jersey. She informed me that buying him L.L.Bean boots would be a good investment for the Maine winters.”

Allaying Allard’s fears about the distance from New Jersey to Maine, “she assured me that that the college was equipped to assist Jack if he needed anything.” 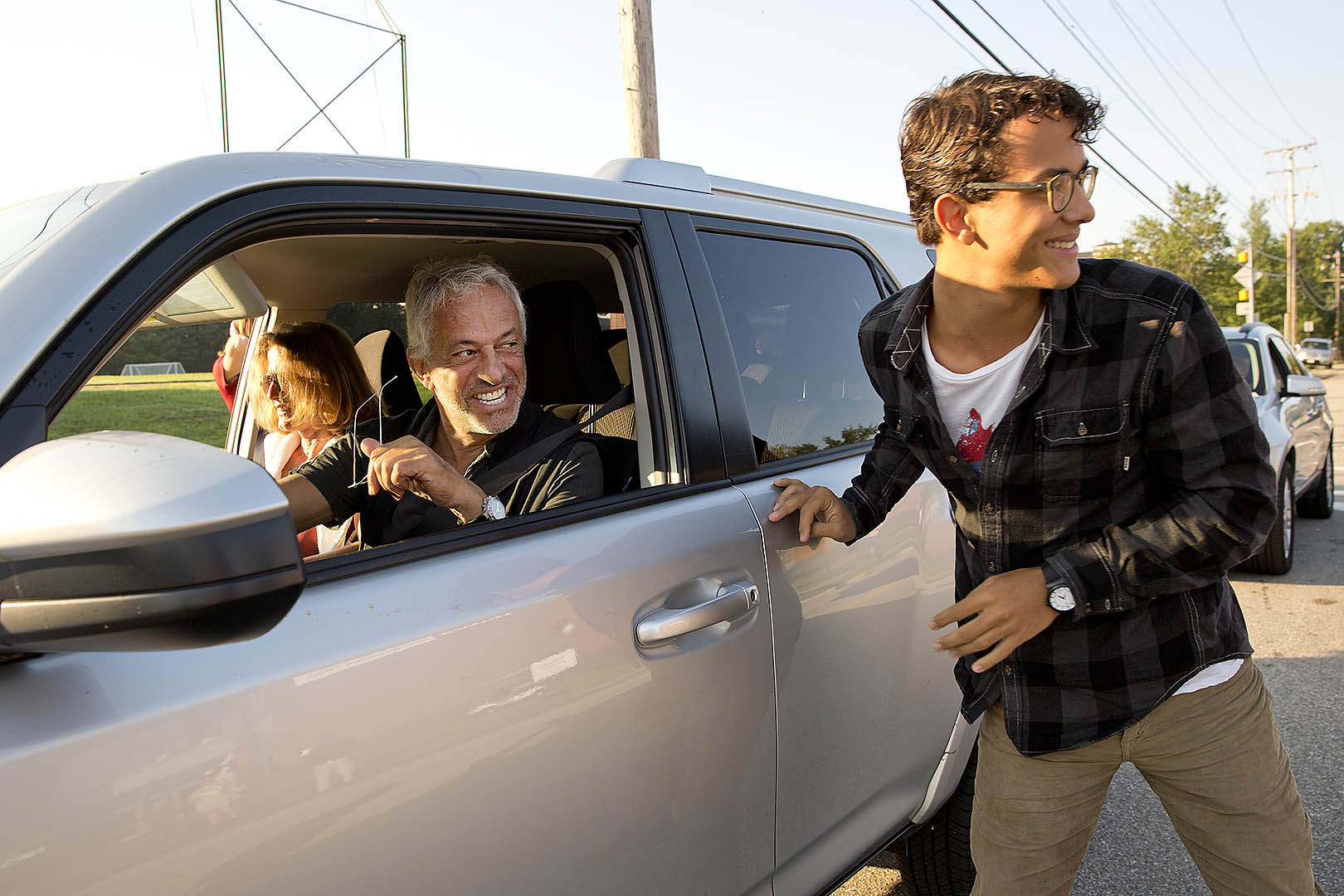 On Opening Day in 2015, Daniel Fichmann ’19 of New York City gets out of the family vehicle as parents Jose and Barbara drop him off at Commons on Central Avenue. (Phyllis Graber Jensen/Bates College)

“She honestly alleviated any silly concerns I had,” Allard laughs. “He was only going to Maine, not the moon.”

Allard’s daughter, Katie, followed Jack to Bates three years later. Genny adds, “I’ve had confidence in them to strategize solutions. We always let our kids know we were here for them if they needed a sounding board, but that they were ultimately the ones who had to make the choices.”

An active volunteer with the college’s Parents and Family Association, Missy Moreland has been on the giving end of those Bates phone calls. Her son is Ned Moreland ’19 of Monkton, Md., and while he’s been a self-starter at Bates, she satisfied herself that Bates could deliver top-notch services, especially academic and career advising.

“The faculty advising is critical to a good start for students, and I’ve seen a lot of wonderful things that Bates has done that have really eased my level of anxiety there,” she says.

“We are there to help and support Ned. And if questions come up, we always bring it back to, ‘Have you utilized the services available to you at Bates?’”

Now on our doorstep, the Class of 2022 ‘represents Bates College history’