2018 Convocation: Practice empathy — and let it transform you

The theme of making a difference in the world is standard issue in the ceremonies that open and close academic years.

At Bates’ 2018 Convocation, though, that theme gained sharp new urgency thanks to some moving personal testimony, three thought-provoking questions, and a fresh visit to the Rev. Martin Luther King Jr.’s “arc of the moral universe.”

In her Sept. 4 welcome to the 550 members of the incoming Class of 2022, Bates President Clayton Spencer used King’s famous passage to explore how Bates helps students sort out their callings — and where the college’s social justice ethos fits into that. 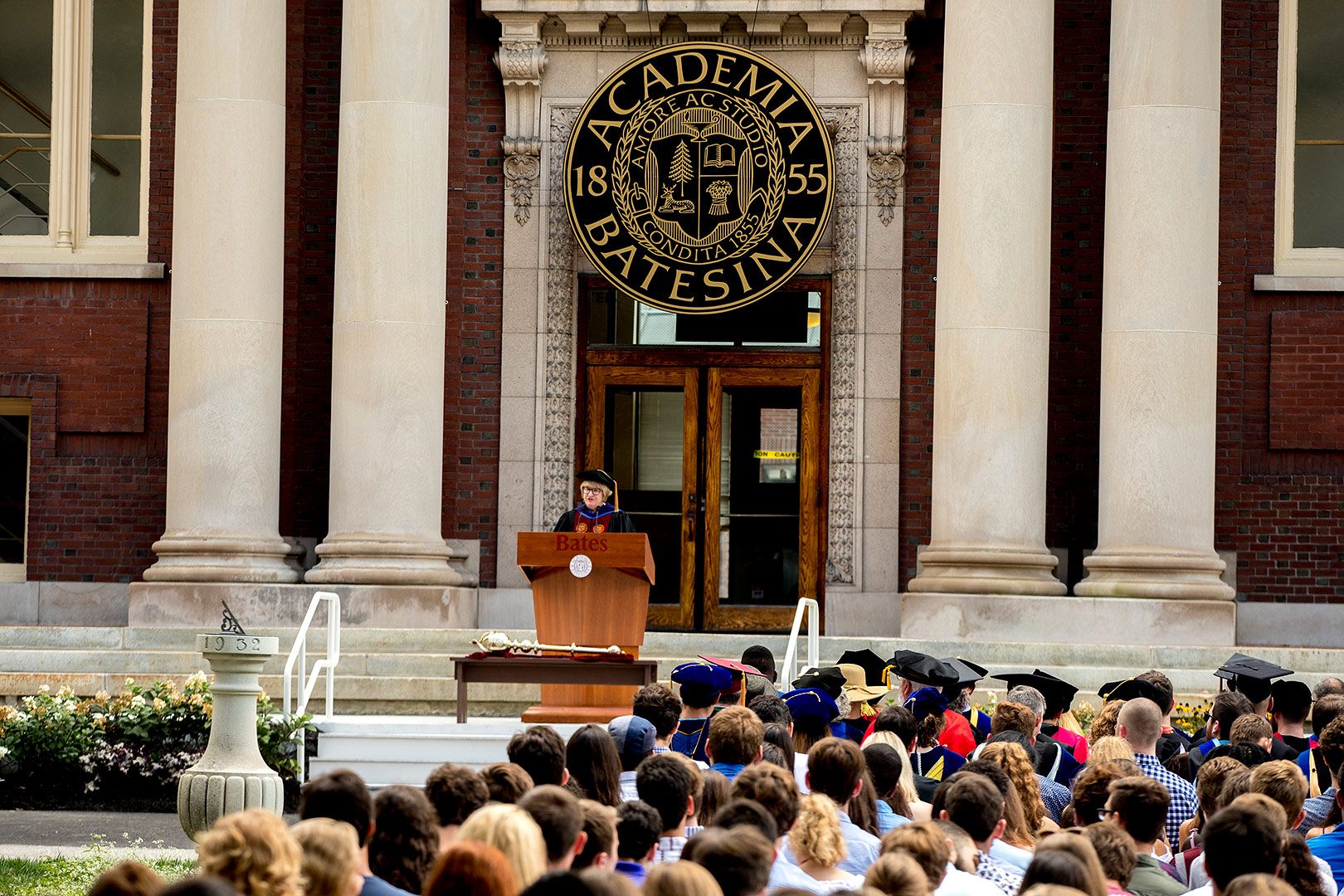 Speaking during Convocation on Sept. 4, 2018, Bates President Clayton Spencer welcomes the Class of 2022 to Bates, and the entire campus community to the start of a new academic year. (Phyllis Graber Jensen/Bates College)

Also speaking were Associate Professor of History Joseph Hall, chosen by the departing Class of 2018 last spring to give the Convocation address; Bates Student Government President Walter Washington ’19, greeting the new students on behalf of the older ones for the second year; and Multifaith Chaplain Brittany Longsdorf, who gave the benediction.

Spencer bookended her welcome with one of the most inspiring statements to come from the civil rights movement: “The arc of the moral universe is long, but it bends towards justice.” (King adapted the theme from the writings of 19th-century Unitarian minister Theodore Parker.)

King’s maxim “expresses a thought that I once found reassuring,” said Spencer, “but now it feels dangerously like false hope, cold comfort, or a seriously misplaced sense of inevitability.” Is that arc, she asked, “really bending toward justice in Syria, in Venezuela, in Myanmar, in our schools, on our city streets, at our borders, in our public discourse?”

If Parker intended this thought as an “affirmation of hope,” Spencer continued, “I also hear it as a call to action — as did President Obama, who said that if the arc is going to bend toward justice, it’s not going to do it on its own. We have to get in there and use our best efforts to bend it.”

Why tell this to the college’s newest students? Because, the president explained, Bates is a place to figure out “who you are and how you’ll make a difference in the world.” It’s a place whose own moral universe is codified by its mission statement, which reads, in part, “With ardor and devotion, we engage the transformative power of our differences, cultivating intellectual discovery and informed civic action.” 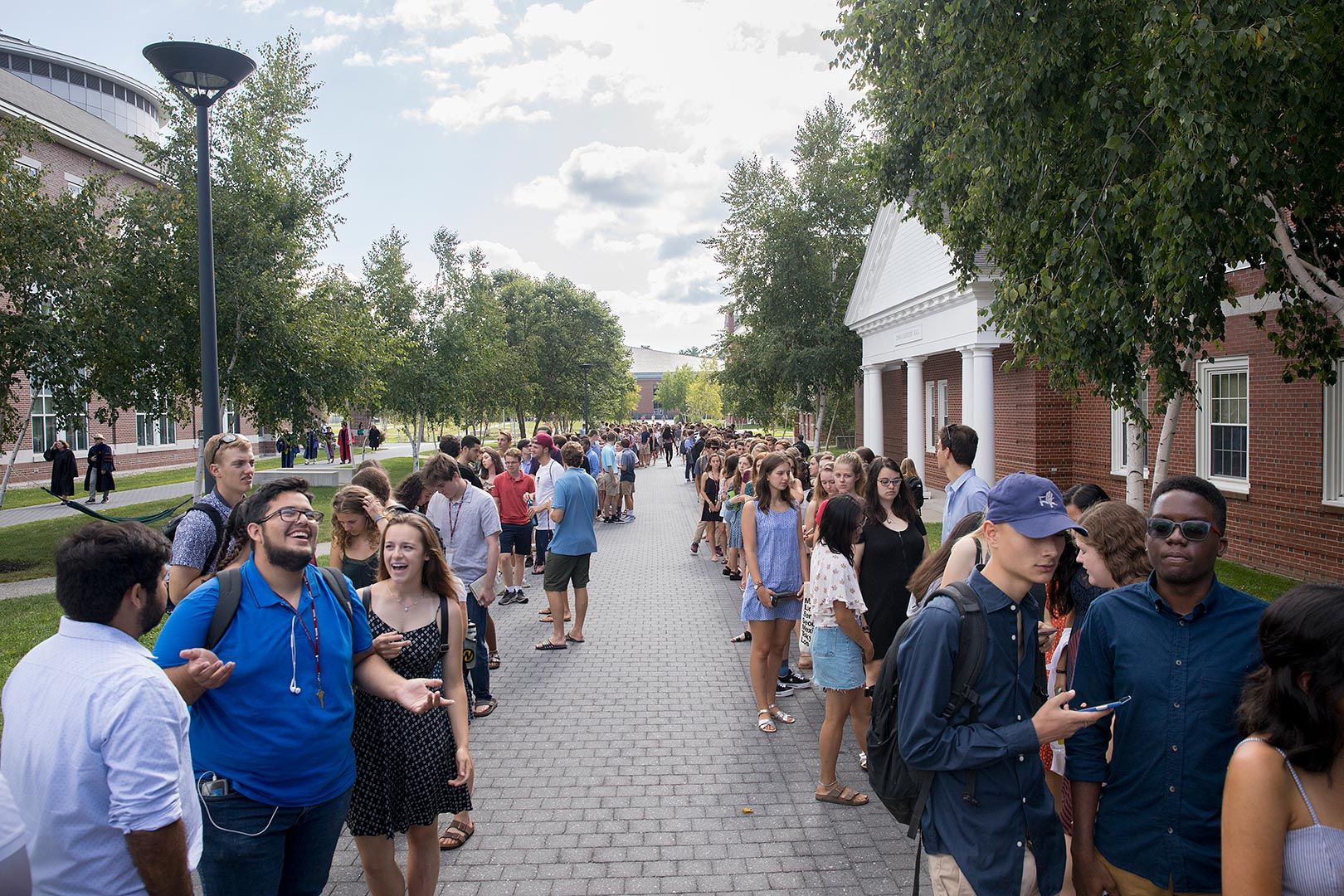 Mixed emotions are abundantly evident as the Class of 2022 lines up on Alumni Walk prior to Convocation. (Phyllis Graber Jensen/Bates College)

Ardor, devotion, and engagement with difference: moral practices to which Spencer added a fourth. “Intellectual discovery and informed civic action unfold out of a prior commitment to what I will call empathy,” she said, broadly defining that term as a way of “approaching ideas, people, or situations with a stance of curiosity and fundamental openness.”

Quotations from two American writers, one contemporary and one from the 1850s, expanded that notion of empathy. In his introduction to The Scarlet Letter, Nathaniel Hawthorne wrote that “it contributes greatly toward a man’s moral and intellectual health to be brought into habits of companionship with individuals unlike himself, who care little for his pursuits, and whose sphere and abilities he must go out of himself to appreciate.”

And Spencer cited a June 29 New York Times opinion piece by Dave Eggers that likened art to empathy: “It expands the moral imagination and makes it impossible to accept the dehumanization of others. When we are without art, we are a diminished people, myopic, unlearned, and cruel.”

As they immerse themselves in Bates, Spencer told the first-years, “figure out which questions compel you most deeply, which modes of inquiry stimulate your curiosity and begin to feel intuitive, and which forms of expression engage your creativity and help you shape your own unique worldview.” 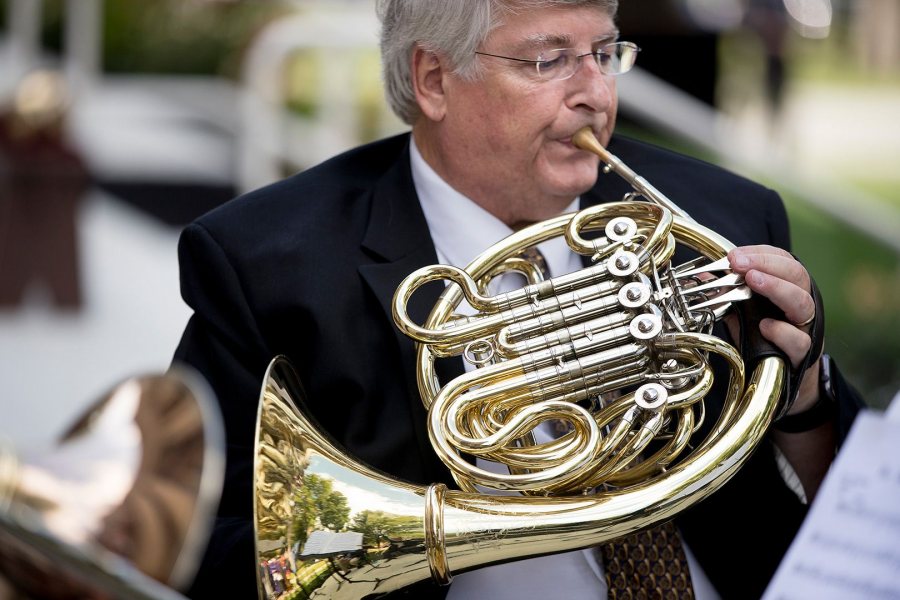 But there was a caveat. “Paradoxically, this journey of self-discovery only works if you’re willing at every turn to get outside yourself, to engage with difference — and, much more important, to be prepared to be transformed by this act.”

“Do your part while you’re here to bend the arc.”

A compelling speaker, Washington ’19 exemplified Spencer’s charge to the new class. Returning to campus after a summer working for a firm that provides legal aid for disadvantaged people, he told the new students about helping to resolve two eye-opening cases in which landlords had made life intolerable for their tenants.

In one, the management of a trailer park refused to correct problems, including life-safety issues, with several units. In the other, a military veteran had been evicted because he had stopped paying rent — but he had stopped rent because the landlord wouldn’t fix problems with the apartment.

Washington first met the veteran in a parking lot where he was living in his car. 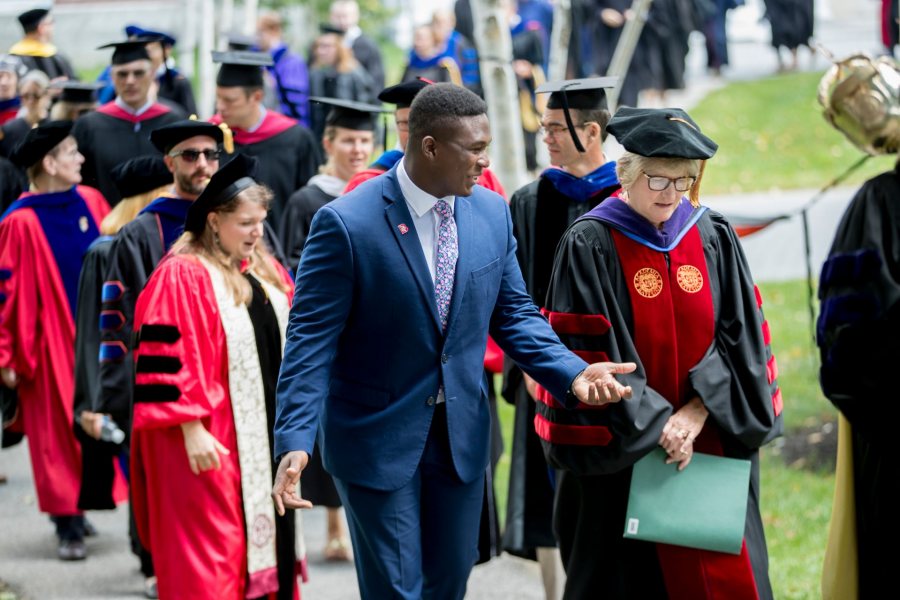 “It became apparent to me,” Washington said, “that in order to effectuate the change that we want to see within this world, we’ve got to spend more time getting closer to those forgotten within our society, and spend more time in uncomfortable situations that place us amongst the forgotten.

“In a lot of ways, it was those people that showed me what true compassion, true equality, and true justice was all about.”

Hall used his time at the lectern to reflect on the role of questions as quests, as journeys in which small answers accumulate into major understandings.

“Ideally, you’re going to have the space to [ask questions] in your classrooms,” at Bates, he said. “But there might be other questions that intrigue you that don’t fit in those spaces. I hope you do the work to make those spaces” — a process Hall then demonstrated, making space amidst Bates’ Convocation to raise three thought-provoking questions about the college’s founding.

“How many of you have heard that Bates College was founded by Oren Cheney, who was an abolitionist?” Hall asked the audience. More than half raised their hands, after some coaxing. 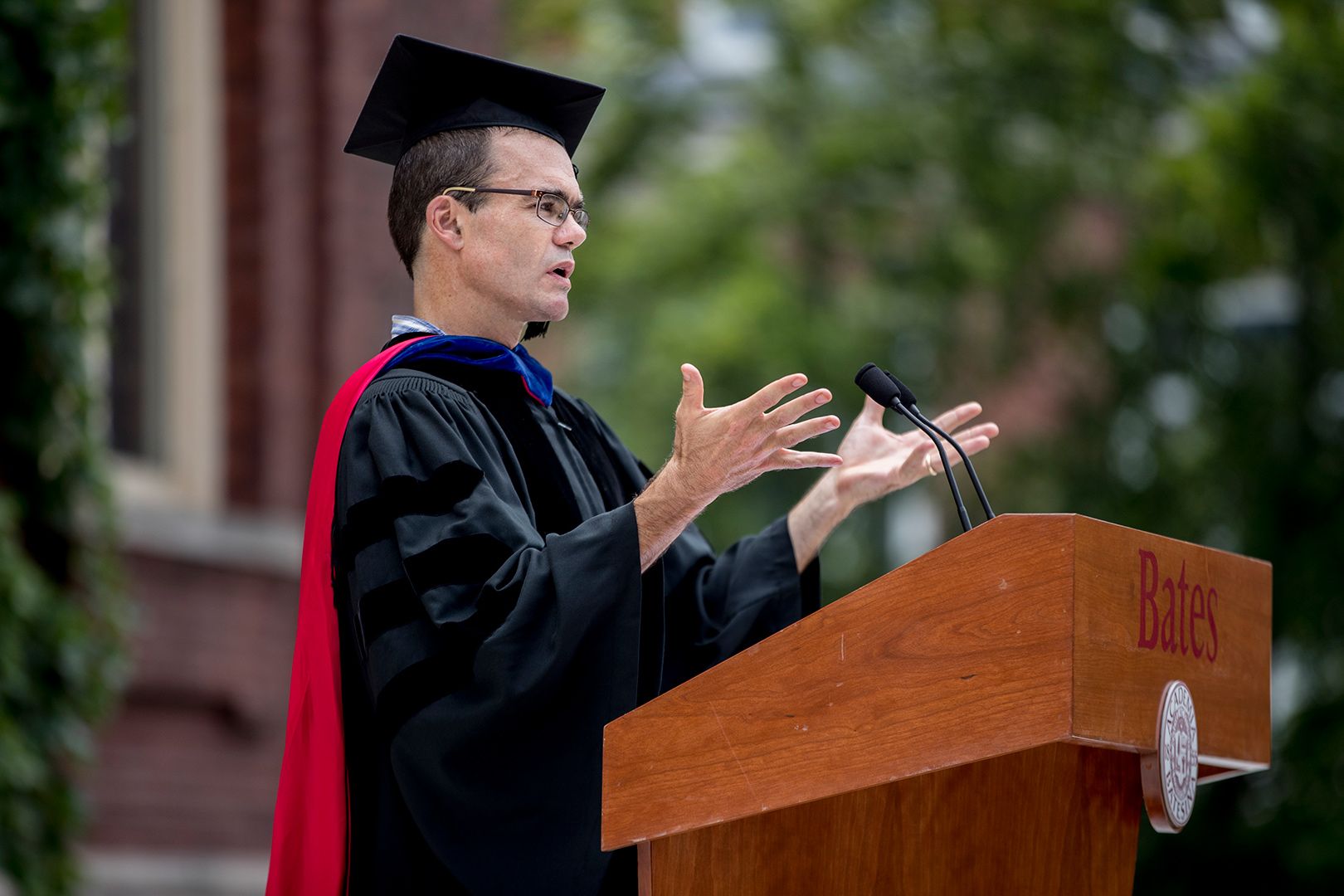 Hall recounted the story of Bates’ founding by Cheney, a Freewill Baptist and abolitionist who “believed deeply in the equality of all people, such that he believed that anyone should be admitted to what was in 1855 the Maine State Seminary, regardless of their racial background or gender,” he said.

“How many of you know that Bates College is named after Benjamin Bates, an industrialist who established the textile mills downtown in Lewiston?” Again, a respectable show of hands. Hall explained that when Cheney wanted to remake the seminary as a liberal arts college, in the 1860s, Bates the industrialist was a key financial supporter.

“Third question,” said Hall. “How many of you know that the cotton textiles that Benjamin Bates and others were weaving in Lewiston were made, until 1865, from cotton grown by enslaved people in the South of the United States?” Fewer hands went up that time.

This troubling paradox, Hall explained, seemingly went unaddressed by Cheney himself, the deep-dyed abolitionist who damned slavery as “a giant sin against God and an awful crime against man.” 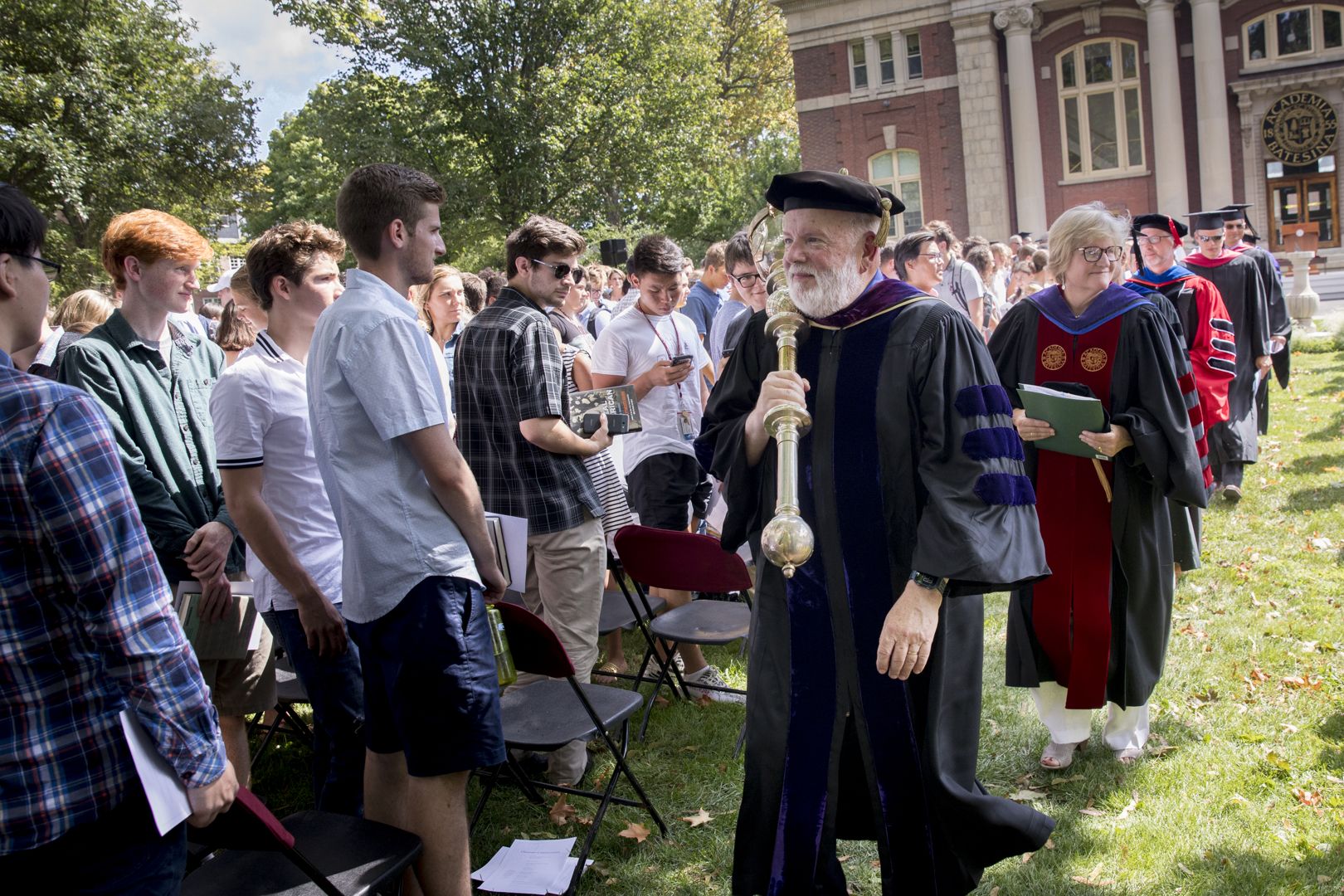 Yes, Hall pointed out, Cheney likely would have rejected financial backing directly from a Southern plantation owner. But, as a diary from 1864 revealed, he was happy to accept $10,000 from industrialist Bates, whose wealth was derived in part from the unpaid trevails of plantation slaves.

“These are only my questions,” added Hall. “One of the things that both Walter and Clayton made very clear is that your quest, your development, depends on your questions…and the answers I hope you get from the people around you.” 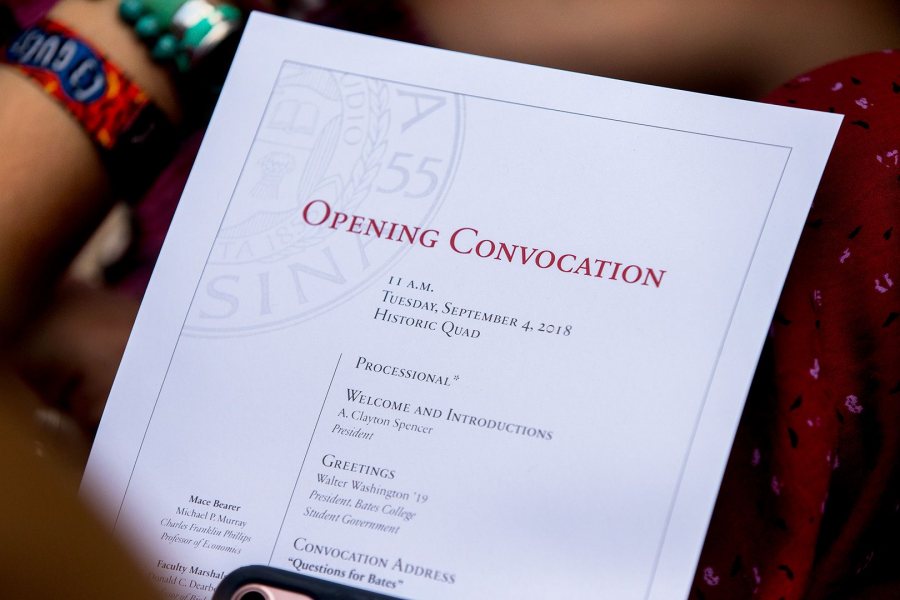