Not every Opening Convocation at Bates ends with a legend of the American labor movement leading a chant of “Yes we can! ¡Sí, se puede!”

But that’s what happened on Sept. 3, as Bates began its academic year with a ceremony featuring social justice icon Dolores Huerta, the 89-year-old co-founder of the United Farm Workers, as the keynote speaker. 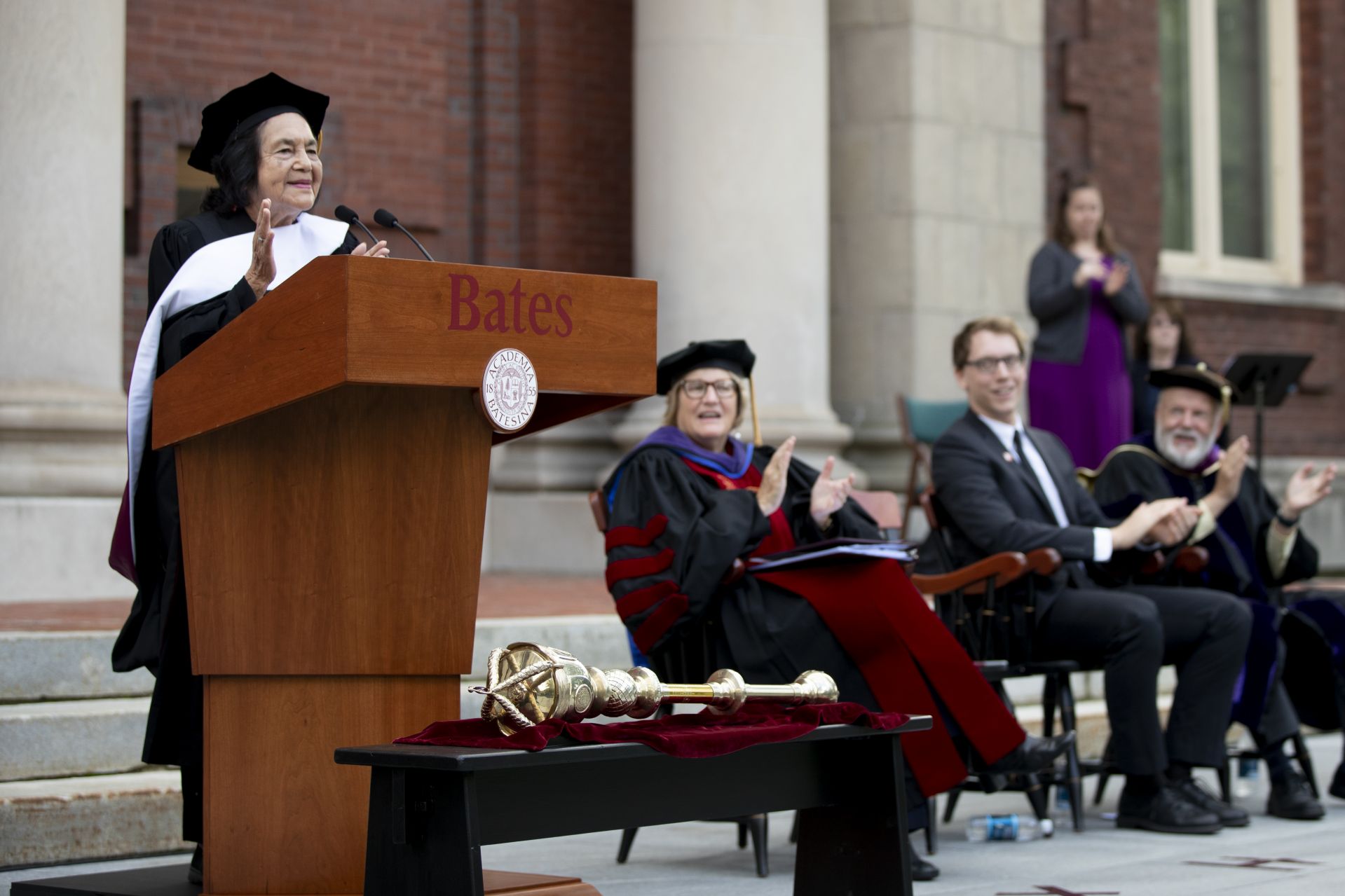 The Opening Convocation address by legendary labor leader Dolores Huerta energizes the group on the Coram Terrace as well as the audience on the Quad. (Phyllis Graber Jensen/Bates College)

Bates had invited Huerta to receive an honorary degree in May; she accepted, but at last minute was unable to attend. Instead, the Doctor of Humane Letters degree was conferred during her visit Tuesday.

If “Yes we can” was the emphatic answer concluding Huerta’s talk, what was the question? She had several: Can we get our schools to teach young children anti-racism and the real history of the labor movement? Can we fight incipient fascism in the U.S.? Living in the richest country in the world, can we share the wealth more equitably?

And, crucially: Can Bates students, including the 501 members of the Class of 2023, become the activists to make those reforms? 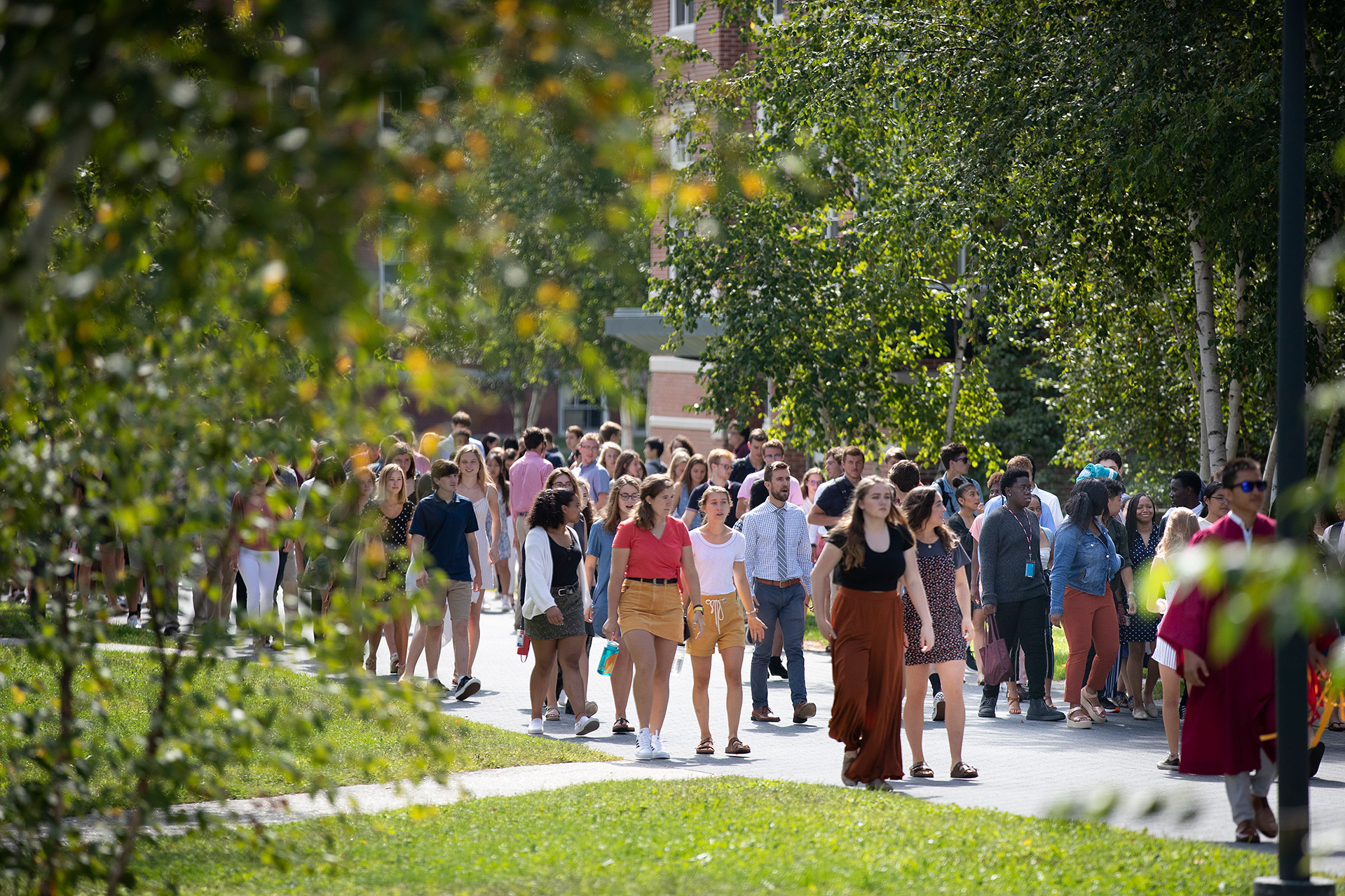 Shortly before the start of Opening Convocation, members of the Class of 2019 find their places on Alumni Walk for the ceremonial procession. (Phyllis Graber Jensen/Bates College)

Huerta likened the moral urgency of the present moment to the advent of World War II, when the fight against fascism in Germany and Italy was accepted as a universal obligation. “Well, I think that’s kind of the crisis that we have right now in our country,” Huerta said. “We have got to support an effort to get rid of racism, to get rid of bigotry, get rid of misogyny and sexism [and] homophobia.

Huerta and her UFW co-founder, Cesar Chavez, stepped into the mass consciousness in the 1960s with their involvement in a grape-workers’ strike in Delano, Calif., and a subsequent national boycott of non-union grapes.

Since then Huerta has not stopped advocating for immigrants, people of color, women, and the environment. (On Aug. 20, she was arrested in California during a union protest calling for better pay for home-care workers.)

Urgent and blunt, Huerta’s address offered a number of prescriptions for the social ills that are cramping the national psyche. Education about racial equality needs to begin at the kindergarten or pre-K levels, she said. And it needs to begin with a simple truth: There is one human race and it began in Africa, she said, to applause. 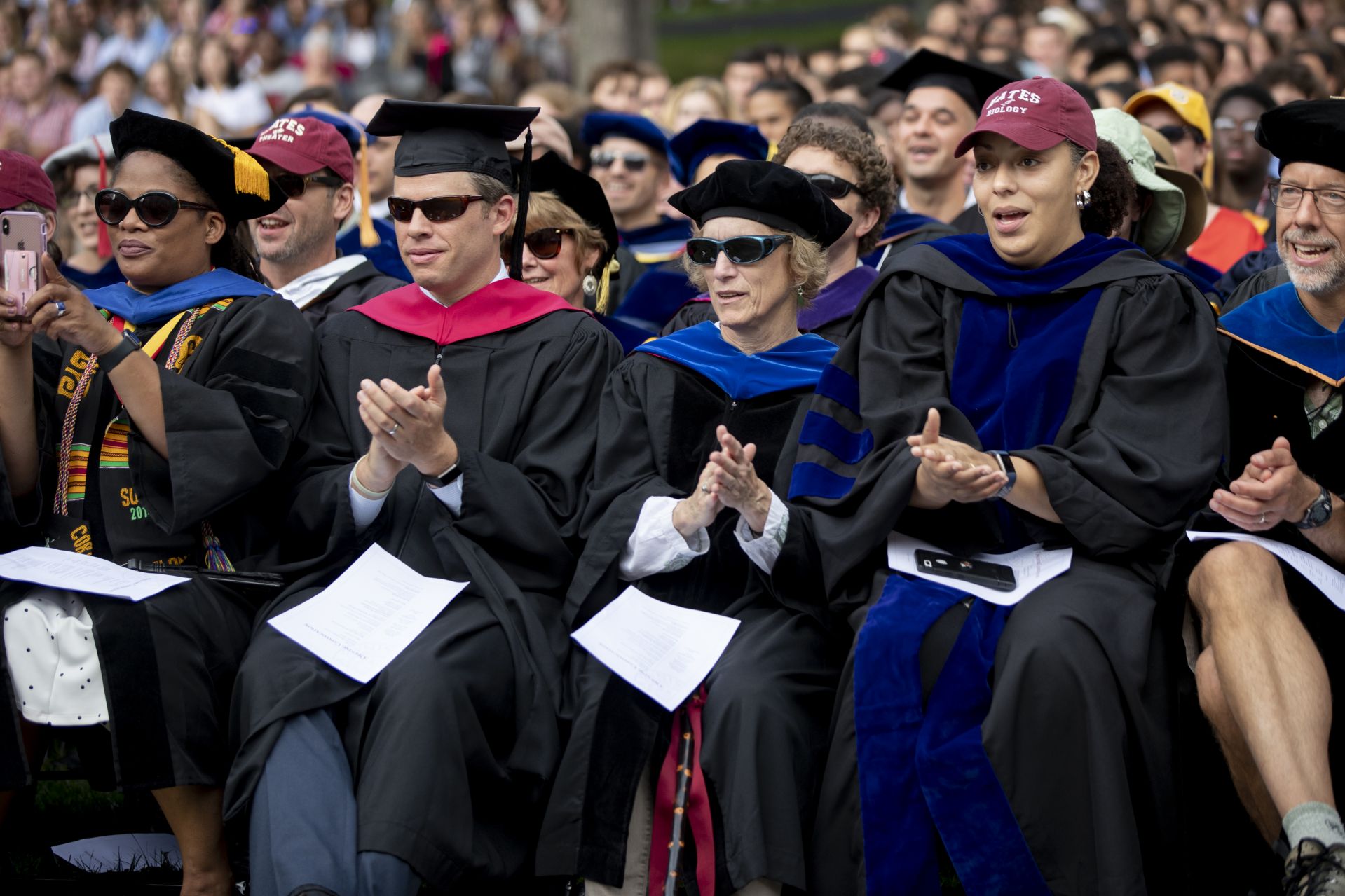 “We are all Africans of different shades and colors,” she pointed out. “So we can say to all of those white nationalists, people in the KKK, the neo-Nazis — get over it, you’re Africans. Okay?”

“We didn’t cross the border. The border crossed us.”

The United States “was a brown country to begin with,” she pointed out. “I was born in the state of New Mexico. My great-grandparents were born there. My great-great-grandfather was in the Civil War, on the Union side.

“And so when they say to us, ‘Go back where you came from’ — hey, we are where we came from. We didn’t cross the border. The border crossed us.”

“If we do not engage, if we do not participate, if we do not go out there and become the missionaries of truth, then nothing will change. So I’m going to ask all of these students here to, please, get engaged.”

Huerta ended her talk — and launched “Sí, se puede” — with a demand for economic justice. “There is no reason why the richest country in the world should not have universal health care,” she said.

She said, “We have the resources, but they’ve got to be shared equally. Can we make this happen?” 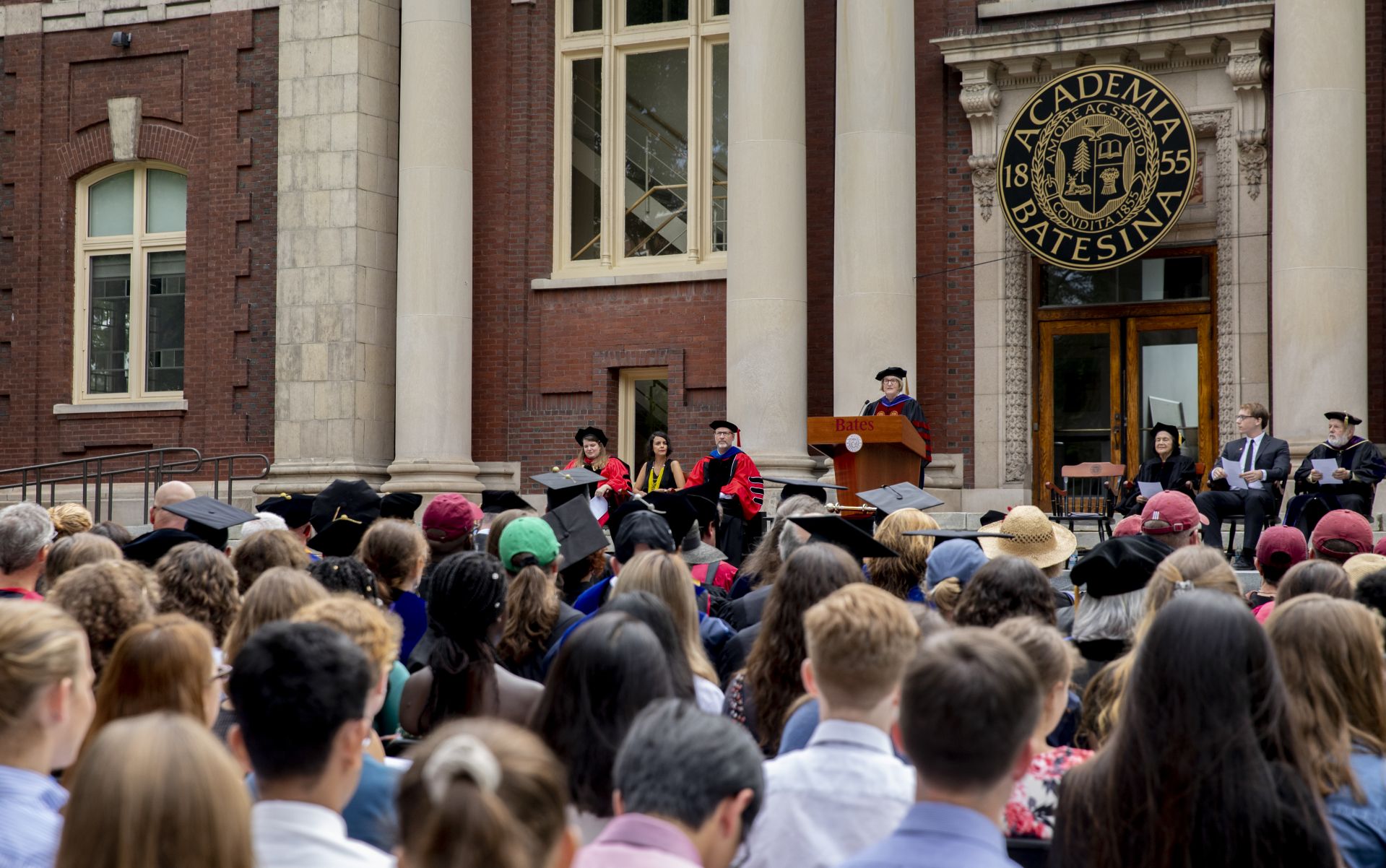 In her welcome, President Spencer told the new class that theirs was an active, not passive role in the Bates education. She quoted convocation advice from writer and feminist Adrienne Rich: “You cannot afford to think of being here to receive an education; you will do much better if you think about yourselves as being here to claim one.”

This involves the strength to say “yes” even when “no” might be easier. Helpfully, the Bates style of education, Spencer continued, “is set up precisely to provide you with solidarity as you move through the joys and challenges of the next four years. And solidarity is a powerful source of courage.”

Lizanecz, too, urged the new students to take a pro-active approach, academically and socially — especially in terms of rocking one’s own identity. “Embrace what sets you apart from the rest of your classmates,” he advised. “The transformative power of our differences will enrich your time both at Bates and throughout your life.

“You will find that people appreciate authenticity, uniqueness, honesty and kindness in all aspects of your college years and throughout your life. … Great communities get their strength through diversity, in equality, and mutually respecting all its members.” 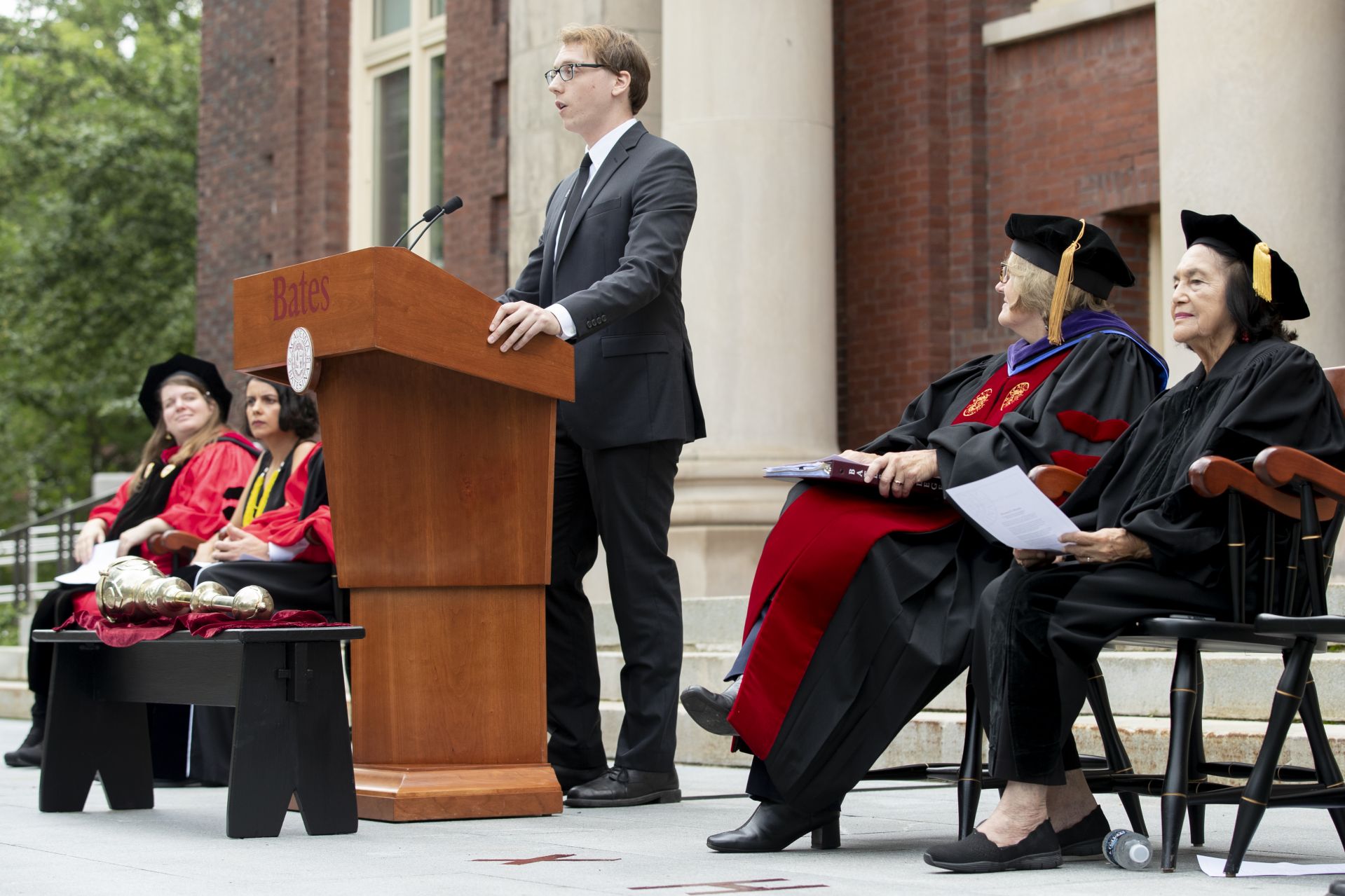 With a memorial tree planting ceremony and then lunch al fresco to follow, Multifaith Chaplain Brittany Longsdorf offered a parting benediction to close the Opening Convocation:

“You are on the cusp of a pilgrimage of the heart,
Where you will meet yourself,
Over and over again
In the challenging classroom,
Under the canopy of rustling trees on the quad,
and among the chattering hallways of this hallowed place.”

2018 Convocation: Practice empathy — and let it transform you