Charlie Cook: 2018 midterms truly the ‘most important since Moby Dick was a guppy’

Since 1984, when he started what has become The Cook Political Report, political analyst Charlie Cook has watched nine presidential election cycles and nine midterm cycles.

In “every single one,” he told a Bates audience on Sept. 11, “I heard someone say, ‘This is the most important election since Moby Dick was a guppy.’”

But this year, in a political landscape where people are more divided than ever, that’s actually true. “This is a heckuva midterm election,” he said.

Cook, whose nonpartisan political reports are respected by journalists and people in politics across the ideological spectrum, offered comments during a Bates visit sponsored by the Department of Politics. 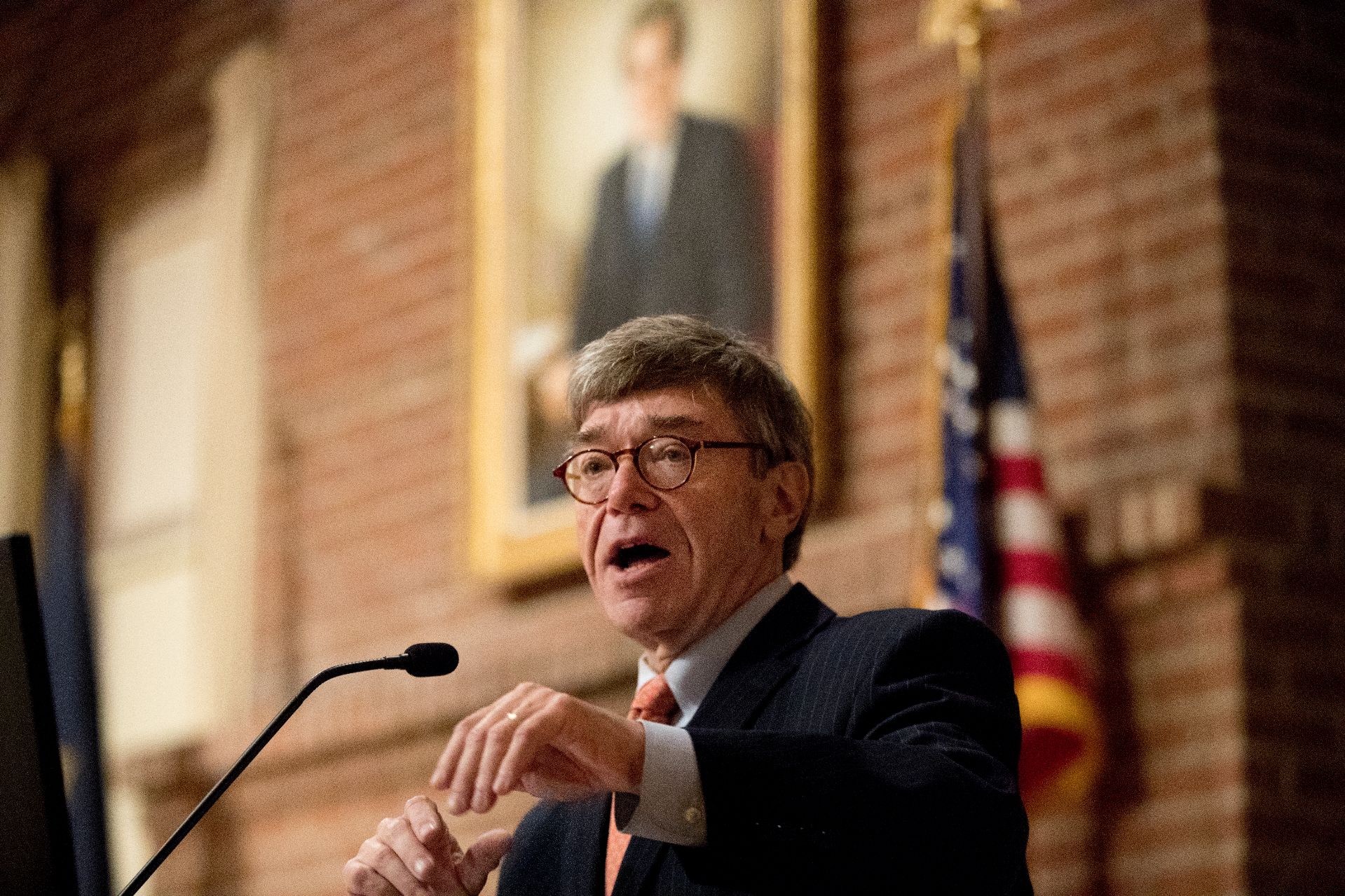 At a talk at the Muskie Archives on Sept. 11, political analyst Charlie Cook discussed the 2016 presidential elections and the upcoming 2018 midterms. (Phyllis Graber Jensen/Bates College)

The talk ranged widely, from Cook’s explanation of why Donald Trump won the 2016 presidential election (a combination of mistakes by Hillary Clinton’s campaign, intensity on the Republican side and a lack thereof on the Democratic side, and polling in three states that was slightly off) to how he met U.S. Sen. Edmund Muskie ’36: while working as an elevator operator (“I learned politics from the ground up,” Cook joked.)

The core of his talk, however, was the upcoming midterms, where “there’s a whole lot on the line,” he said. Republicans hold majorities in both houses of Congress, plus 33 governorships and majorities in many state legislatures.

“This is a heckuva midterm election.”

Because Republicans hold so many offices, it follows that more of their offices are up for grabs on Nov. 6 — and Democrats are mounting strong challenges, he said. That’s in a national environment where partisan, racial, gender, geographic, and religious divides seem sharper than ever, Cook said.

“I like to characterize this election as what looks like a Democratic tidal wave up against a Republican seawall,” he said. “The question is, which is going to be stronger — the Democratic wave, or the Republican wall?”

Cook gave Democrats a 70 percent chance of getting a majority in the U.S. House. Here’s what drives that Democratic “wave”:

Historical patterns: Waves are like clockwork, Cook said. In 38 midterm elections since the Civil War, the party of the sitting president lost seats in the House of Representatives. In 26 midterm elections since U.S. senators have been directly elected, the party in the White House has lost seats in 19. Similar patterns exist for state governorships and state legislatures. 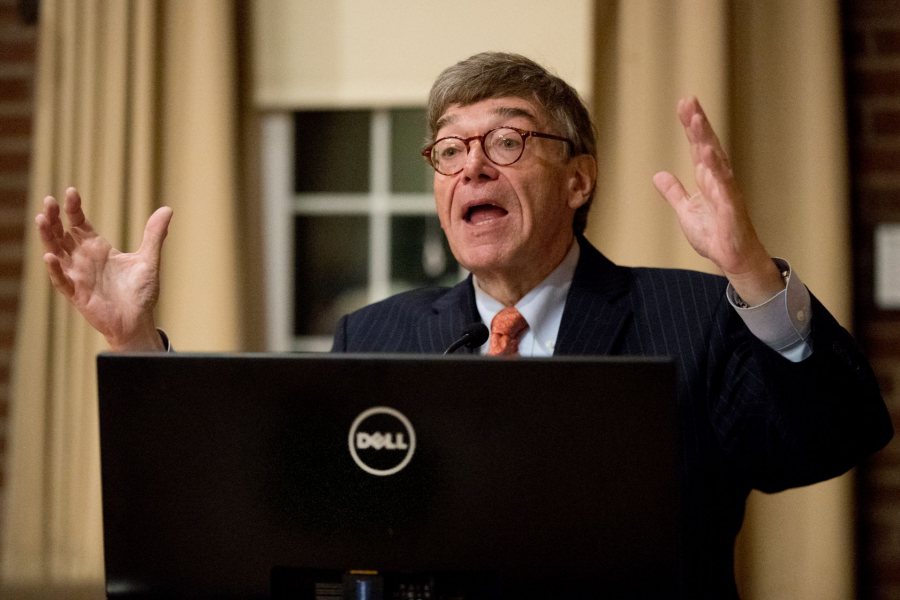 Democrats might win big in 2018 for three reasons, political analyst Charlie Cook said: There tends to be a wave of opposition in midterm years, President Donald Trump’s job approval rating is under 50 percent, and Democrats have done well in elections since 2016. (Phyllis Graber Jensen/Bates College)

In the runup to the two Obama-era midterm elections, in 2010 and 2014, “who was madder than hell?” Cook said. “It was tea party people. It was conservatives. It was Republicans.” The result: GOP majorities in both houses.

That means Democrats are likelier to win against Republican incumbents. One of those competitive races is right in Maine’s 2nd Congressional District, where Jared Golden ’11 is challenging GOP incumbent Bruce Poliquin. That race is “really, really, really close,” Cook told Steve Collins of the Lewiston Sun Journal.

Job approval: The president’s job approval rating is a “barometer” for his party’s prospects in the midterms, Cook said. Since 1986, if polls have shown that more than 50 percent of people think he’s doing a good job, his party won’t lose many midterm seats. If the rating’s below 50 percent, though, the party loses an average of 40 House seats and seven Senate seats.

Trump’s approval ratings have hovered around 40 to 45 percent the entire time he’s been in office — he didn’t get the typical beginning-of-term bump, and neither positive nor negative news about him has moved the barometer much, Cook said.

What’s more, those who dislike Trump’s job performance tend to dislike it strongly, which makes  Democrats, liberals, and Clinton voters more enthusiastic about the election than Republicans — and more likely to vote.

A variety of polls are “pointing towards more intensity, more energy, more passion on the Democratic side, just as it showed more for the Republican side back during the two Obama midterm elections,” Cook said.

Election results since 2016: Democrats have won several elections since 2016, from an open Senate seat in Alabama to governorships in Virginia and New Jersey.

Cook, however, said those elections don’t necessarily indicate larger trends. Roy Moore, the Republican candidate for Senate in Alabama, was “radioactive,” he said. In New Jersey, Gov. Chris Christie had such low approval that his lieutenant governor, Kim Guadagno, would never have won a bid to replace him.

In fact, Republicans won many of the special elections that took place around the country. Still, Democrats were getting more votes proportionally than Hillary Clinton did in the 2016 presidential race, Cook said — meaning they will do well in widespread elections in November.

But as good as things look for Democrats, they’ll face a significant defense from the GOP, Cook said, so much so that he gives Republicans a 65 percent chance they’ll keep their majority in the U.S. Senate. Here’s what makes up the Republican “wall”: 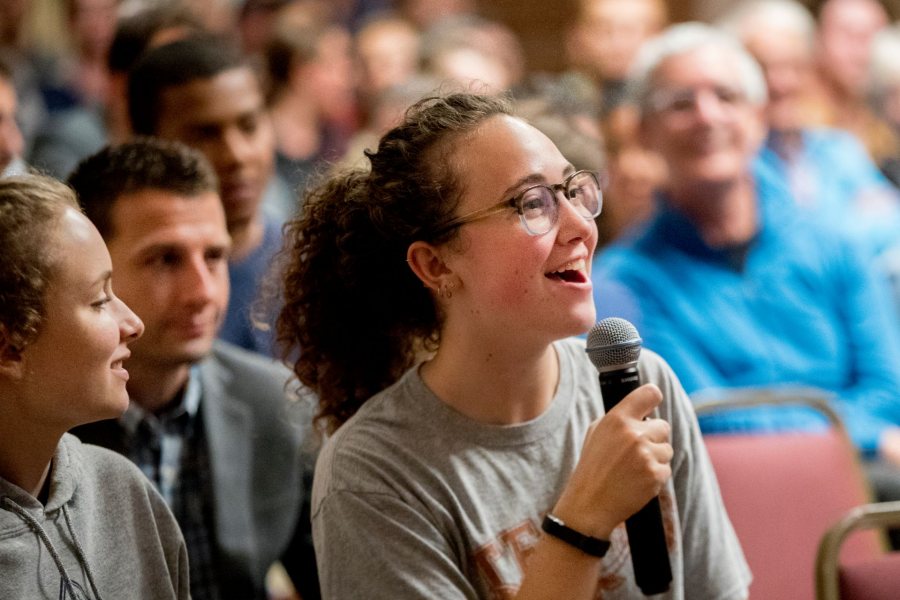 “They did to Democrats what Democrats had done to Republicans in a whole bunch of states,” Cook said.

Population patterns: “Once a party wins a district by one vote, every vote you get above that point is wasted,” Cook said.


Democrats tend to be concentrated in cities and college towns while Republicans are more spread out across congressional districts — and across more districts. As a result, Republicans have the opportunity to win more districts, and winning a majority in the House would be harder for the Democrats.

The Senate map: In 2006 and 2012, Cook said, Democrats gained many Senate seats. Now, their six-year terms are up, which means that those Democrats now up for re-election are vulnerable to Republican challengers.

So even though the GOP holds only a narrow majority in the Senate (51 to 49), the Democrats stand to lose more, Cook said. What’s more, the Democrat-held seats up for election are in states Trump won in 2016, in some cases by a significant margin, making Democratic incumbents less likely to win.

Still, you can’t discount the groundswell of support for Democrats. “I can’t tell you for sure which side is going to gain even one seat, because the map is so overwhelmingly red Republican, but the wave is so blue Democratic,” Cook said.

So how high will the blue wave go? Hard to say, Cook said. But whoever ends up with majorities in federal and state legislatures, “Republicans are going to lose a whole bunch,” he said. “They could lose between five and nine governorships around the country. They could lose 400 or 500 state legislative seats around the country. This is going to be an ugly year for them.

‘An intention to do better’: Reparative gestures and nature meet in Carolyn Finney’s Otis Lecture