On Election Day, students help each other get out the vote

By Emily McConville — Published on November 9, 2018

If you used the main entrance to Commons on Tuesday, you couldn’t have missed the posters on the doors, spelling V-O-T-E.

Or the table, staffed by students, full of candy, “I Voted” buttons, and Maine voter guides.

Or the easel pad that tallied each passing Bates student who had voted, in person or absentee, in the 2018 midterm elections — 127, as of 11:30 a.m. on Tuesday.

And if for some reason you did miss it, Maya Seshan ’20 of Wilton, Conn., president of the Bates College Democrats, made sure you got the message.

“Did you vote?” Seshan called into the flood of students arriving for lunch. “Do you have plans to vote?”

A passer-by replied that they had, in fact, just voted. “Yes!” Seshan said. “Hit that tally!” Then there were 128. 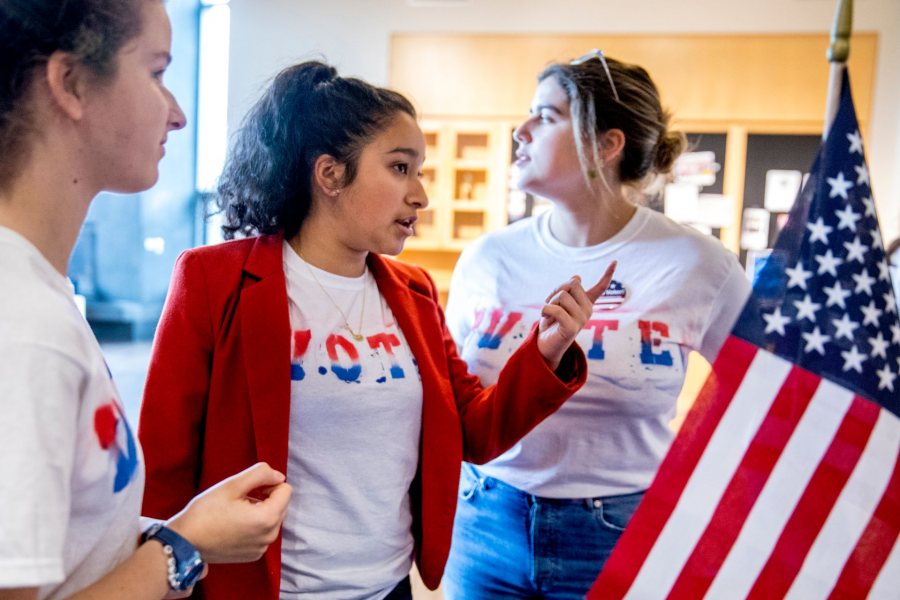 In Commons on Election Day, Maya Seshan ’20 of Wilton, Conn., shares the message of the day: “Did you vote?” (Phyllis Graber Jensen/Bates College)

Bates students can choose to vote either in Maine or in their home states, in person or absentee. Many elect the local option, heading to the Lewiston Armory, a short walk down Central Avenue from Commons.

Plenty of people around campus worked to get out the vote, and to make voting easy. Students walked together to the Armory from the Office of Intercultural Education. Professors reminded their students repeatedly to vote; some arranged their own walkovers.

The College Democrats, the College Republicans, and the Harward Center, among other groups, walked students to the Armory every half-hour from the opening of the polls to their closing. 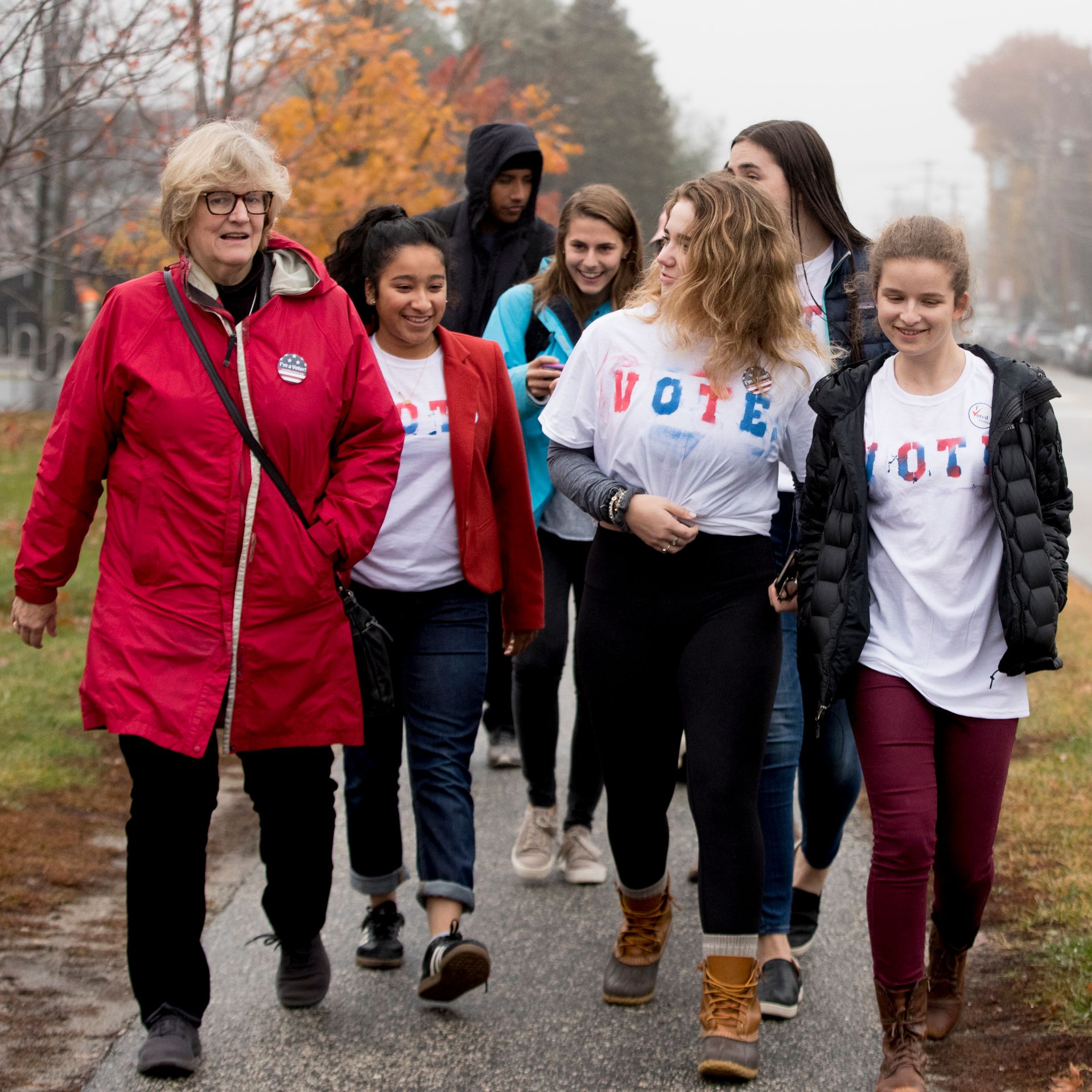 President Clayton Spencer joins a group of Bates students in the short walk to the polls on Election Day. (Phyllis Graber Jensen/Bates College)

Seshan said groups like Planned Parenthood Generation Action, Bates Student Action, and various environmental groups have joined in the effort to register students to vote and ensure they voted.

“We want to make sure there’s no way a student goes through their day at Bates today not knowing that it’s Election Day and not understanding their civic responsibility,” Seshan said.

One way to do that was by calling to her classmates, again and again, “Did you vote?”

“I submitted my absentee ballot,” one replied.

“I voted,” someone else told the table as she picked up a button. “I just wanted the pin.”

“I’ll vote after work,” someone else promised. 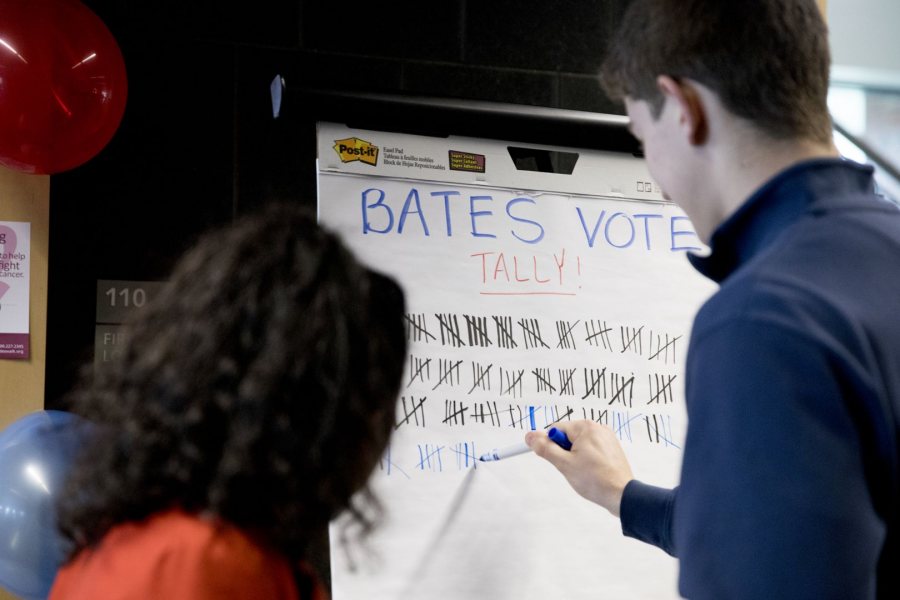 Arianna Fano ’19 of Lincolnshire, Ill., and Daniel Fichmann ’19 of New York City added their tallies. Fano chronicled the ways she’d been reminded to vote — professors reminding her in all her classes, endless posts on social media.

“There’s an element of social pressure,” Fano said, “but in a good way.”

And plenty of students took the student organizers up on their offer to escort them to the polls. Liza Folsom ’21 of San Mateo, Calif., joined a small noontime group. Folsom had been excited to find out she could register to vote in Maine. She considered herself voting for people who could not.

“It feels like I’m making a difference,” she said.

If just one ballot wasn’t enough, students could vote in a mock election, conducted by students in Associate Professor of Rhetoric Stephanie Kelley-Romano’s “Presidential Campaign Rhetoric” course. The polling place was also in Commons. 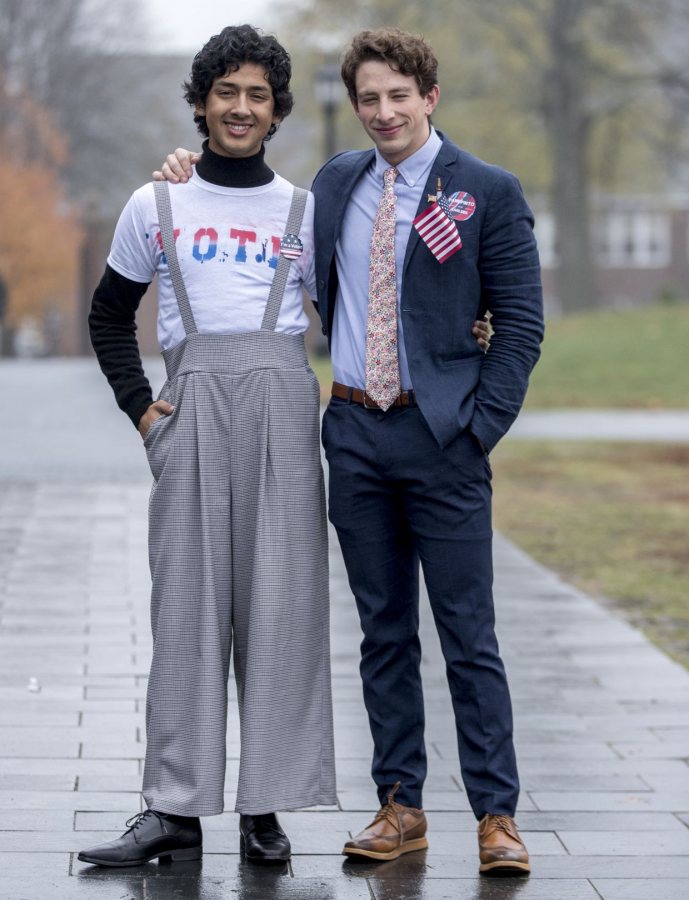 On Election Day, Topher Castaneda ’19 of Los Angeles (left) poses with Dylan Metsch-Ampel ’19 of Montclair, N.J., on Alumni Walk. Castaneda was encouraging students to vote, while Metsch-Ampel wore a suit in his role of a campaign manager for a mock presidential election on campus. (Phyllis Graber Jensen/Bates College)

By 2:30 p.m., when the rain that had threatened all day was making good on its promise, the tally marks topped 300 — “one in six,” observed Aimee Oakes ’20 of Asheville, N.C., who volunteered to walk students over from Commons. By the next day, the tallies ran onto another sheet of paper.

Seshan left for a class but said she’d take the rowing team to the polls later that evening — a coxswain, she wanted to create a culture of voting among her younger teammates.

By then, Commons traffic had slowed to a trickle, and the answer to the day’s big question — “Did you vote?” — was, more and more, “Yep, already voted!”