At her high school in Hanoi, Vietnam, in spring 1997, Ngan Dinh ’02 listened intently as an admissions expert from the United States explained the concept of the liberal arts and described the college he worked for, Bates.

The ideas that the Bates expert, now-retired Dean of Admission and Financial Aid Bill Hiss ’66, put to the class of high school juniors that day — studying in a residential academic community, taking courses across disciplines, and working closely with professors — diverged sharply from Dinh’s understanding of what college would be like in Vietnam, where higher education still followed the old Soviet Union emphasis on training and information, not critical thinking and creativity.

Bates was, Dinh recalls, all about “everyone encouraging you to listen to your heart and go for it.”

Two decades later, Dinh is a key figure in the creation of Fulbright University Vietnam, the first university to bring the liberal arts experience to Vietnamese students.

“What we want to do here is to create this university to be just like Bates, and build relationships so that students can learn to explore themselves,” says Dinh, the university’s founding director of undergraduate studies. 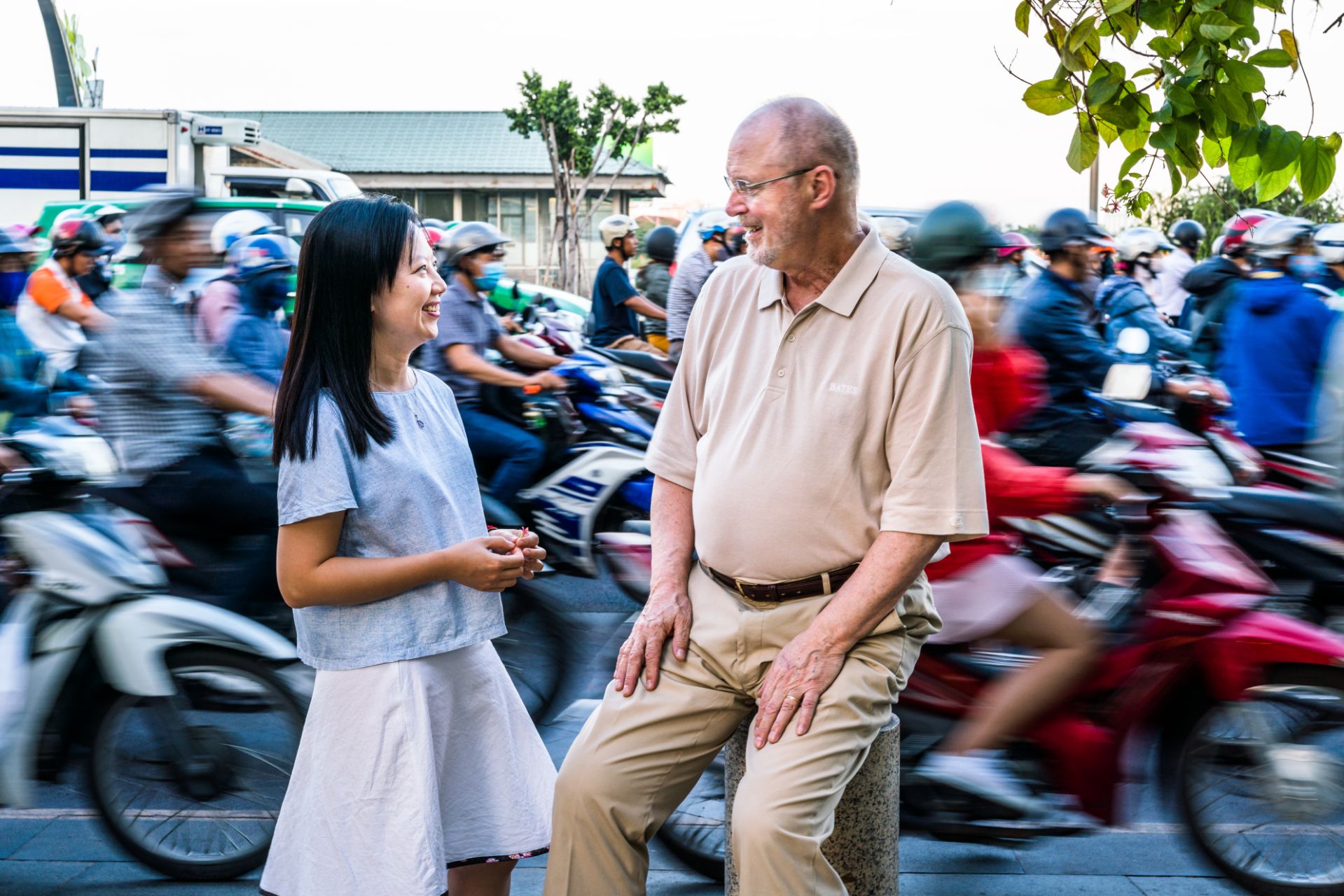 ”She is passionately devoted to Vietnam,” Bill Hiss ’66 says about the efforts of Ngan Dinh ’02 to establish Fulbright University Vietnam. The two posed during the afternoon rush hour in Ho Chi Minh City during Hiss’ visit last March. (Quinn Mattingly for Bates College)

Dinh’s experience with the liberal arts and her desire to bring it to her home country began with Hiss’ presentation that day at Hanoi — Amsterdam High School. Hiss and his wife, Colleen Quint ’85, were in Vietnam to adopt their daughter and decided to do some recruiting along the way. He found that the students were “anxious to hear about American higher education and what the options might be,” he recalls.

At the time, such options were new for Vietnamese students. Just two years earlier, in 1995, the U.S. and Vietnam had normalized relations, 20 years after the North Vietnamese Army captured Saigon to end the Vietnam War. As Hiss recalls, “those students did not know Bates from an engine block. But they were real clear that the windows were just beginning to open, and American higher ed was where the action was.”

For Dinh and other children of parents who had fought for North Vietnam in the war, “the idea of going abroad and going to study in the U.S. was very, very new,” she says.

But when she applied to Bates her senior year and was accepted — the first in a strong contingent of Vietnamese students to attend the college since 1998 — she found that, in her family, it was a much-welcomed idea. 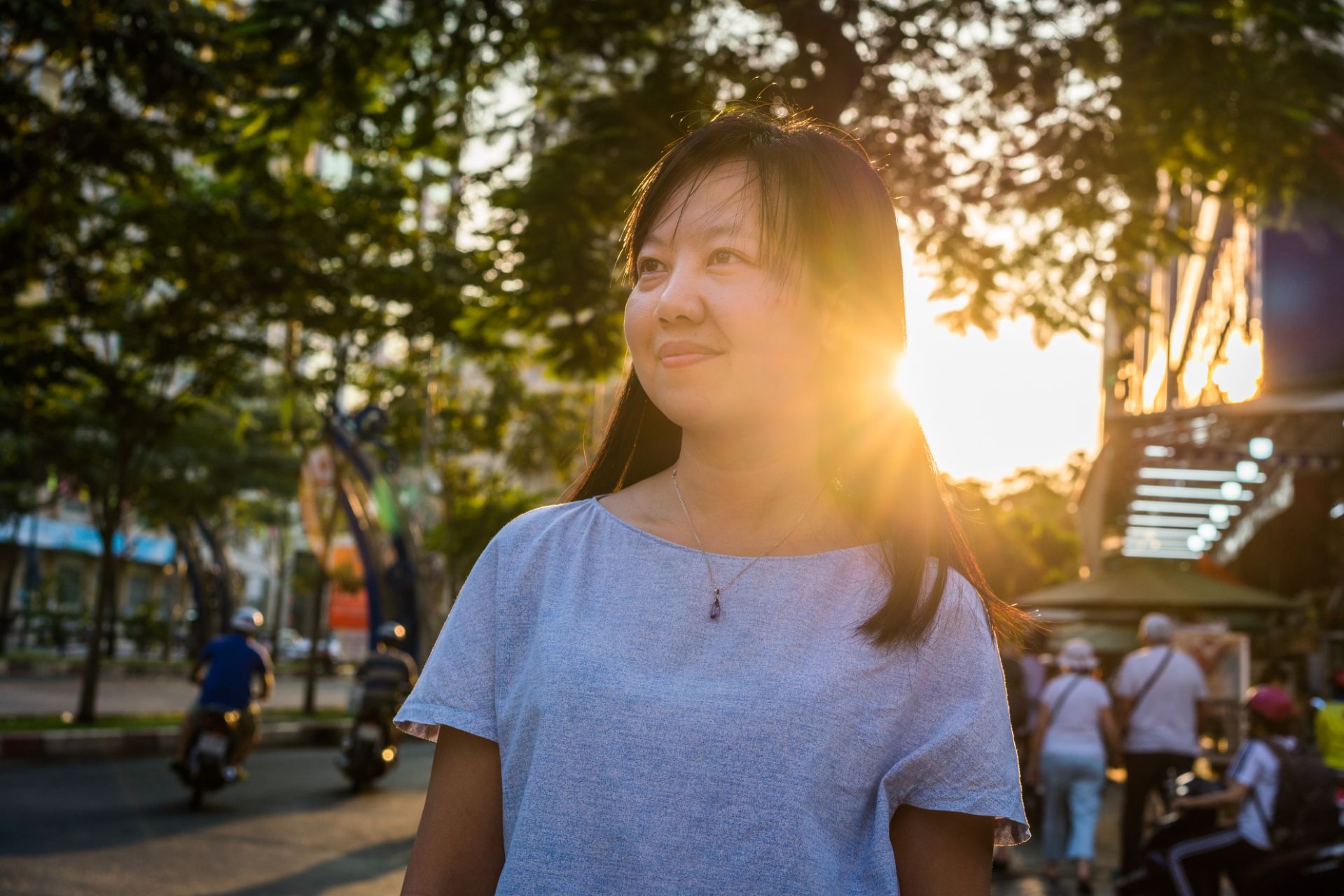 Ngan Dinh, pictured in Ho Chi Minh City in March 2018, was the start of a strong contingent of Vietnamese students to attend Bates since 1998. (Quinn Mattingly for Bates College)

For Dinh, the best part of “the best university in the world” was Bates people. She made friends with roommates, Associate Dean for International Student Programs James Reese, and Den staff alike.

Dinh’s propensity for connecting with people influenced how she approached one of her majors, economics. For her, the discipline is “not just about numbers.”

“It’s not about money. It’s not about demand and supply. It’s really about people and people’s behavior. It’s about learning about the world, how things happen. It has stories. It has a lot of imagination.”

“It was like coaching, mentoring, showing me possibilities that I had never imagined.”

Dinh adopted that approach for her honors thesis, looking at the wage gap between China’s rural migrants and urban workers and concluding that discrimination against migrants was the cause.

Her Bates mentors included Jim Hughes, Thomas Sowell Professor of Economics, and Margaret Maurer-Fazio, Betty Doran Stangle Professor of Applied Economics. In her thesis acknowledgements, she thanked Hughes for being “my problem solver” and “my best friend in America,” and Maurer-Fazio for “thoughtfulness, care, and intellectual inspirations.”

Their support went above and beyond, Dinh says. “It was like coaching, mentoring, showing me possibilities that I had never imagined.”

Dinh often thought about returning to Vietnam to work and contribute to her country. “But I didn’t know when, and how,” she says.

She began to find her answers during a year back at Bates as a visiting faculty member, in 2007–08.

Living in Boston at the time, she stayed with Maurer-Fazio during the school week. Watching her former student teach for the first time, Maurer-Fazio saw Dinh’s embrace of people, especially the way she routinely invited experts and other practitioners into her classroom.

“What would it be like if I go back and teach economics in Vietnam?”

“The way she found new materials and set up the course and brought in people who could address the issues they were talking about in class was particularly creative,” Maurer-Fazio says.

And in her students, just a few years younger than she was, Dinh saw herself — “full of questions, [thinking] ‘I don’t know how this works,’” she says. “Economics is one way of looking at the world, and it’s really fun to share that piece of how you look at the world.”

The next year, Dinh accepted a faculty position at the Fulbright Economics Teaching Program in Ho Chi Minh City, established in 1994 as a partnership between the University of Economics in Ho Chi Minh City and the Harvard Kennedy School to teach public policy and other fields to Vietnamese civil servants and leaders.

Dinh — who earned a doctorate in development at the University of Cambridge as she taught — saw government officials and others use her lessons to affect the lives of Vietnamese citizens. 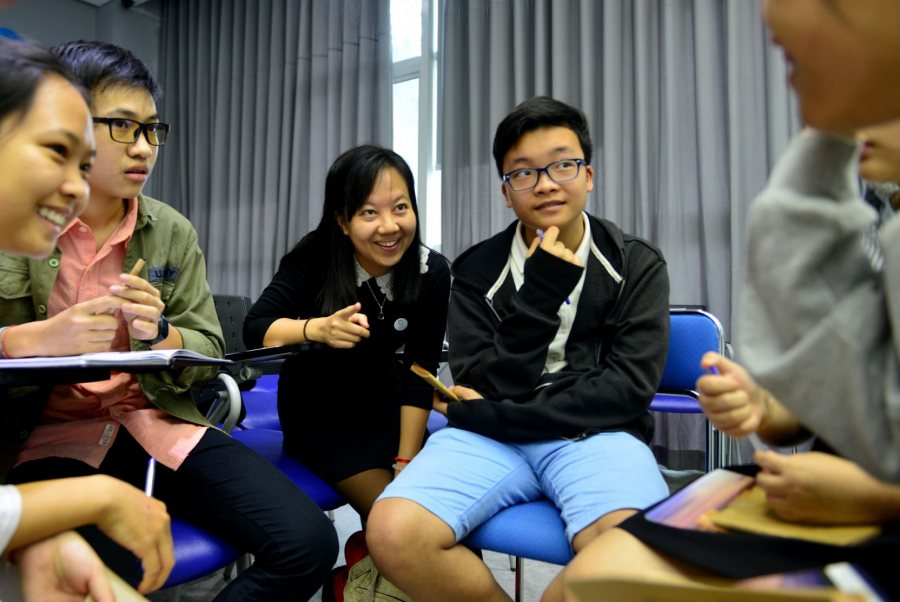 For example, the head of a provincial Poverty Reduction Office might be charged with doing a survey of household wealth in his community, but he wouldn’t know that statistical errors can crop up in such surveys. Guided by Dinh’s expertise, the head could “go back and implement changes right away in their office,” she says.

“The economics departs from being a textbook story and becomes real life.”

In 2010, Maurer-Fazio and a colleague, biologist Pamela Baker ’69, visited Dinh in Vietnam as part of their Bates Fall Semester Abroad program, based in China.

Maurer-Fazio’s husband, the late Ron Fazio, joined the group in Vietnam. He had served in the army during the Vietnam War, earning a Bronze Star in combat, and it was his first trip back to the country since fighting there.

Dinh made it possible for Fazio and her own father, a veteran of the North Vietnamese Army, to tour the country together.

“The economics departs from being a textbook story and becomes real life.”

When Dinh has ideas, “they’re new and creative, and things come out of them,” Maurer-Fazio says.

Dinh had ideas about higher education in Vietnam, and in 2016, she was tapped to bring those ideas to one of the country’s first private nonprofit universities, Fulbright University Vietnam, as its first director of undergraduate studies.

“She is passionately devoted to Vietnam and to bettering its young people’s prospects and their ability to contribute to Vietnam as a country,” Hiss says. “She has seen more styles of education than most people in Vietnam, and she has long experience as a classroom teacher.” 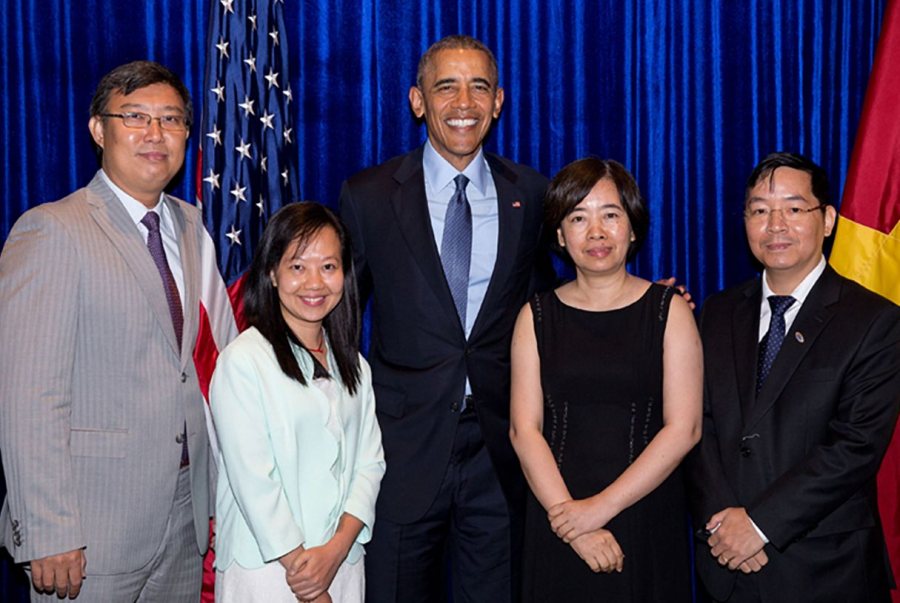 During a May 2016 visit to the country, President Obama poses with Ngan Dinh and the rest of the Fulbright University leadership during ceremonies announcing the school’s opening. (Pete Souza/White House)

With support from the U.S. State Department and Congress as well as Vietnamese sources, the university offers an English-language, American-style liberal arts education to undergraduate and graduate students.

Students work closely with their academic advisers, they have opportunities for off-campus experiential learning, and they live in dorms, eat together in dining halls, and play sports.

And one element of Fulbright University Vietnam is fundamentally Bates. The university is test-optional — students don’t have to take the Vietnamese college entrance exam or any other standardized test in order to apply, making the university more accessible to students from poorer areas of Vietnam.

For the past year, Dinh and her staff — which, for a month in the spring, included Hiss as a volunteer consultant for admissions and financial aid — have introduced the concept of the liberal arts to potential students, explaining everything from interdisciplinary learning to study abroad. 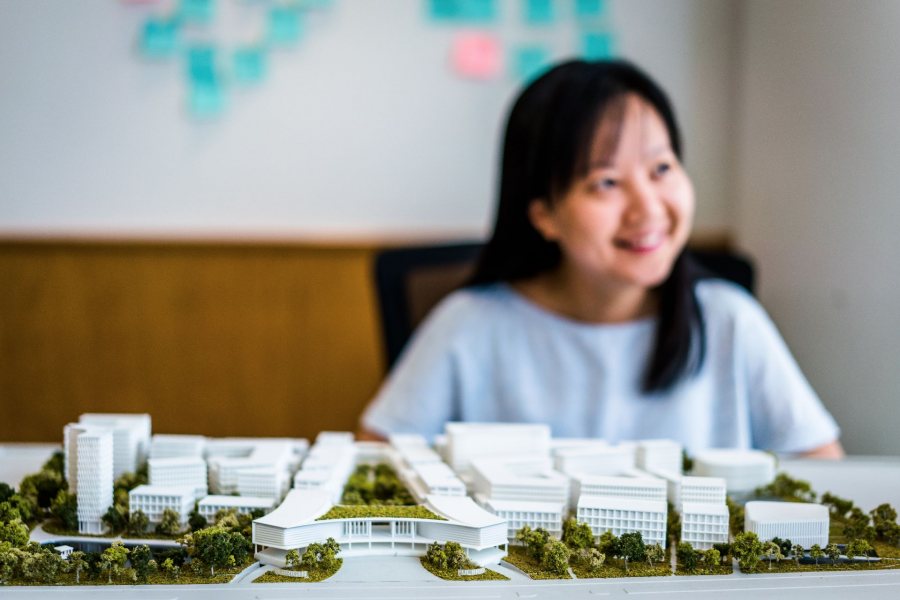 This fall, the first 50 Fulbright University undergraduates are taking part in a “co-design year,” where students and faculty develop the curriculum together.

Dinh hopes Fulbright University — and other liberal arts colleges yet to be established — can offer Vietnamese students the same experience that she could receive only by going to the U.S.

“What we can do is show them what’s possible by changing your mind and looking at things in life with a different attitude, with a different light,” she says. “Fulbright can be among many other people and places to plant the seeds in young people.”