Imani Perry: What if digital activism, such as via Twitter, doesn’t really do anything?

Speaking to a Bates audience on March 7, Princeton professor Imani Perry did what many would deem impossible: give a persuasive argument against social media to an audience of college students.

Perry, the 2019 speaker in the Office of Equity and Diversity’s social justice speaker series, questioned the effectiveness of social media sites such as Twitter and Facebook in the age of online activism and social justice. “What if hearing and witnessing and circulating and retweeting doesn’t do anything?” she asked her listeners in the nearly full Olin Concert Hall.

The Hughes-Rogers Professor of African American Studies at Princeton University, Perry has both a J.D. and a doctorate in American civilization. An interdisciplinary thinker who looks at law, cultural studies, and African American studies, she’s published an extensive assortment of critical essays and reviews and, just in the past year, three books. 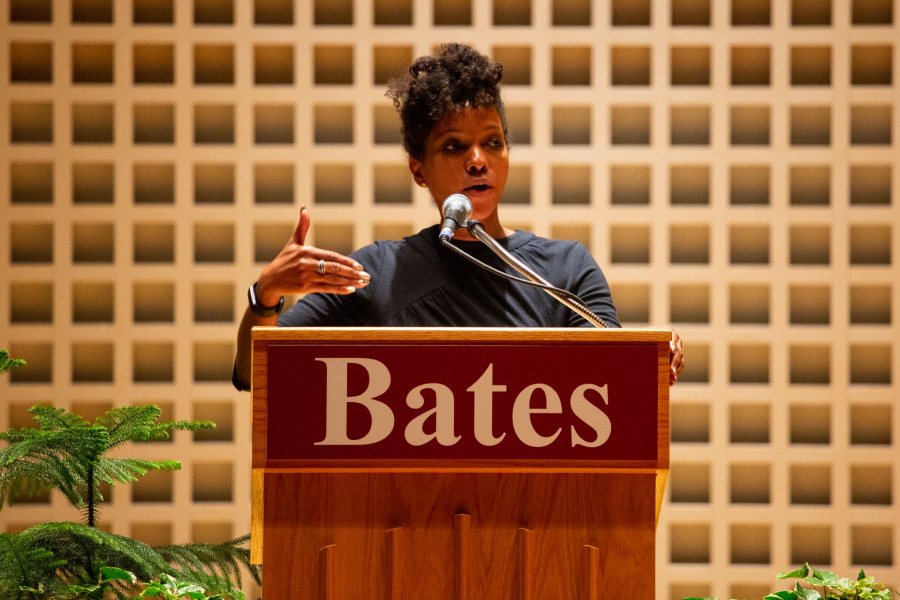 More recently, she said, she’s been interested in the backlash that follows movements for social change and how politics enters artistic expression.

In her talk, “Nice for What?” (named after a Drake song, to the amusement of her audience), Perry made a case for the reevaluation of technology and our relationships, as activists, to social media. She broke down the goods and bads of today’s social media landscape, from Twitter-trending violence and Facebook battle royales to “cancel culture” and the possibilities of social transformation.

Underlying these debates are questions of how we communicate with one another, the ways in which we disagree, and how we can transform ourselves and others.

The case for digital activism

“We’ve seen the use of digital platforms to open up discourse about social ills, inequality, and also function as a landscape in which networking around organizing is possible,” she said.

Providing examples from movements such as #MeToo, Black Lives Matter, and even as far back as Occupy Wall Street, Perry credited social media sites as establishing networks among people who are doing similar work around the world.

“There’s a great deal of power and possibility there,” she said.

“I wasn’t convinced from the outset that they would change anything,” Perry said of such footage. 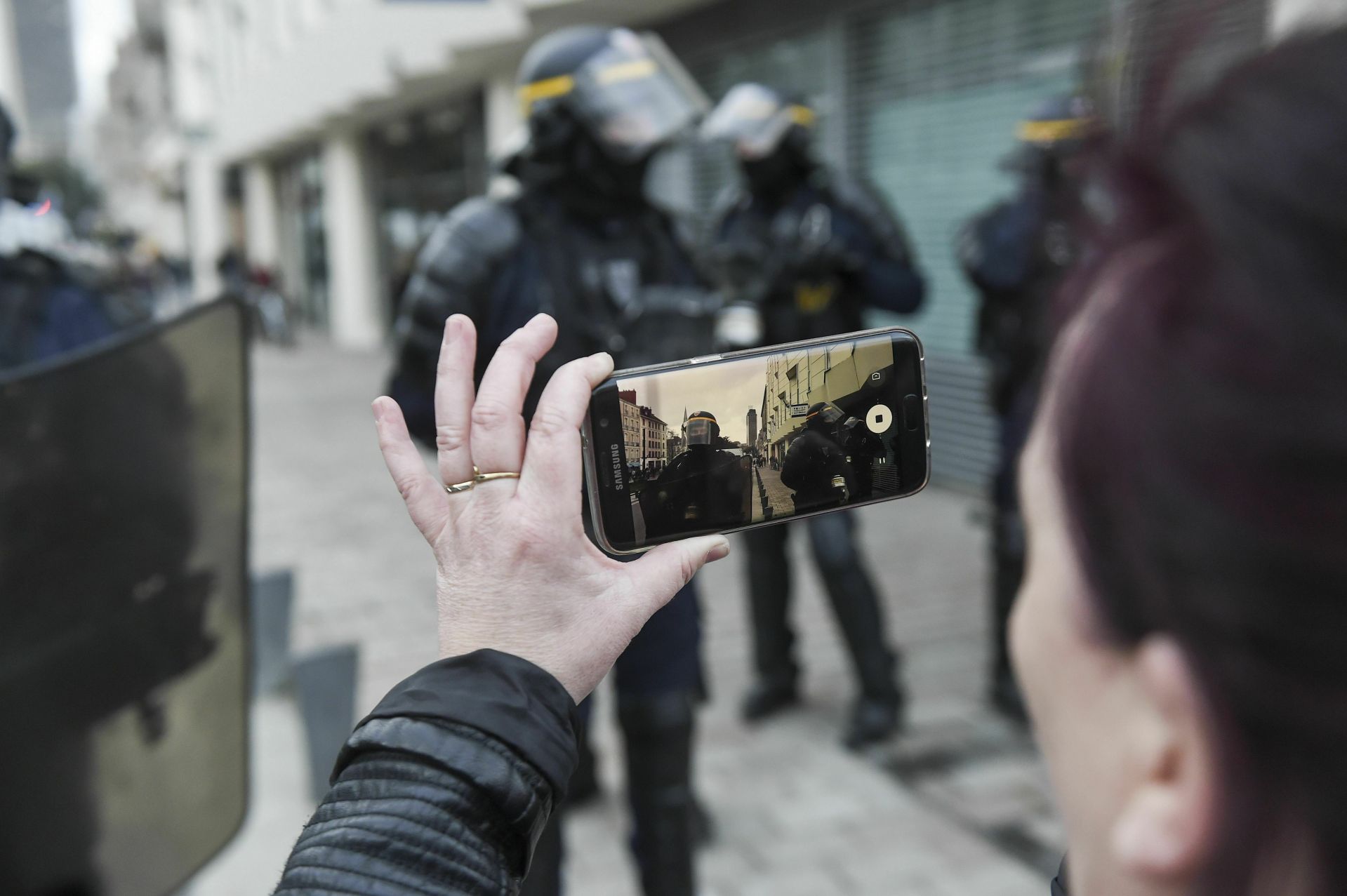 A protestor records video with her smartphone during an anti-government demonstration called by the Yellow Vests “Gilets Jaunes” movement in Nantes, western France, on March 02, 2019. (Sipa via AP Images)

Not only, she argued, did sharing the videos fail to create substantive change, but the witnessing of suffering itself potentially desensitized its viewers to violence and increased stigma.

Speaking of an economy driven by social media traffic, Perry explained that “drawing our attention to an issue doesn’t necessarily mean that we’ll interpret it in the ways it’s intended.”

Misinterpretations of social movements that become “Twitter famous,” such as #MeToo, can sometimes become as popular as the movements themselves.

Perry cited #ThemToo, a group of Twitter users who claim that sexual assault unfairly targets black men. It is misinterpretation that makes “the structure of digital activism so easily become a minefield,” she said.

Anytime someone posts on social media, the post is a replicable artifact that becomes “proxy for one’s identity…and even a form of self-marketing,” Perry said.

“Drawing our attention to an issue doesn’t necessarily mean that we’ll interpret it in the ways it’s intended.”

So, when a post generates pushback, what happens is not a conversation, but what Perry identified as a “face-off” with a Battle Royale structure. Because someone’s post represents their identity, they tend to double down on their argument instead of opening up to criticism.

As a result, “the argument becomes a matter of who wins and who loses,” Perry said.

Though the arguments can seem incredibly trivial, Perry pointed out the larger implications of these online boxing matches. They “create situations where democratic spheres are easily morphed into spheres for amplified public humiliations, celebration of conflict, and gleeful insult,” she said.

Perry’s biggest concern was the culture revolving around the “canceling” of those who say awful or offensive things online.

Perry identifies the punishment model of society as a reason behind this online phenomenon. Members of society tend to identify failure and oust those responsible for it. “To cancel someone is to cast them out,” she explained.

“Every time I see people being canceled I think, ‘What happened to transformation?’”

Pointing to a frequent Twitter phenomenon, Perry questioned the effectiveness of excommunicating or expelling individuals from online communities geared towards progress.

“Every time I see people being canceled I think, ‘What happened to transformation?’”

She continued, “What you want to do is seduce people into a vision of liberation they can share with you. It seems there’s something counterintuitive about the process of expulsion when what we’re trying to do is make revolution irresistible.”

So, while identifying online offenses can be useful, it can also halt any kind of transformation geared toward showing the offending individual the error of their ways.

As a possible remedy, Perry asked her audience to consider the practice of a transformation in which we can shape our community and individual relationships to incline toward justice and equity. “To what extent,” she asked, “are we willing to be transformed?” 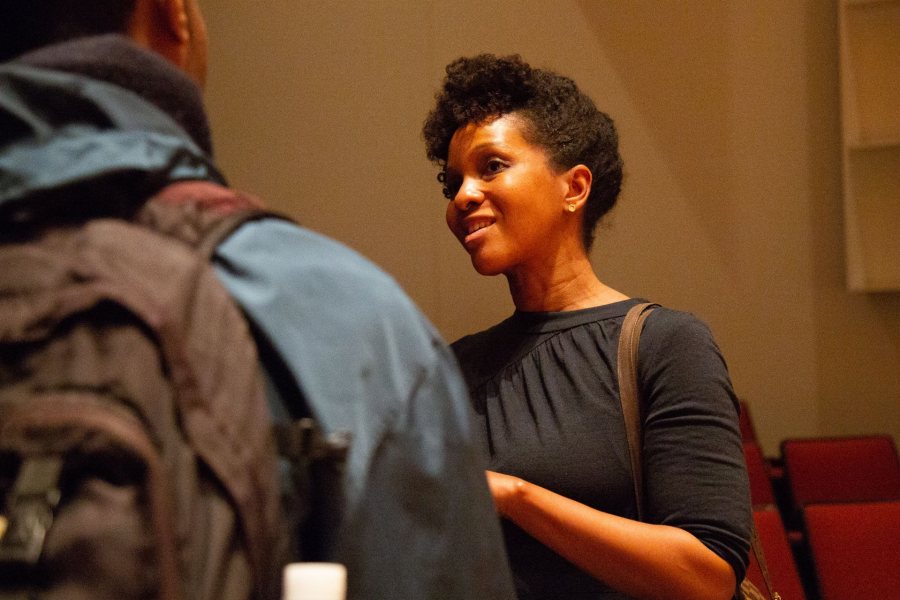 Imani Perry speaks with a student at her talk on March 7. Perry encouraged her audience to think about how to engage in transformation. (Samuel Mironko ’21/Bates College)

Perry concluded her talk by explaining philosopher Stanley Cavell’s idea of a “passionate utterance.” Unlike a “performative utterance,” which could be any social media post leading to a general conclusion, a passionate utterance “invites an exchange rather than invoking a procedure.”

Perry explained that this exchange is “essential to social transformation,” yet it is difficult to achieve on social media due to the superficial nature of Facebook and Twitter posts that so often fail to identify what the posters really mean.

The activist’s goal is to engage in a way that recognizes the messiness of life underneath the surface presentation of social media, Perry said.

“One of the things I’m recommending is openness,” she said.