As a historian, Barbara Ransby searches the past for remedies for today’s and tomorrow’s societal problems. To cope with the perilous times we live in, she recommends that we look to the concept of intersectionality, the legacy of civil rights leader Ella Baker, and the present example of the Movement for Black Lives.

Ransby, scheduled to give the 2019 Martin Luther King Jr. Day keynote address, came to campus a few months later than expected due to untimely winter weather. Her speech was closely aligned with this year’s MLK Day theme, “Lifting Every Voice: Intersectionality and Activism,” extending the relevance of the holiday beyond a single date.

Ransby, a Distinguished Professor of African American studies, gender and women’s studies, and history at the University of Illinois at Chicago, is no stranger to activism. 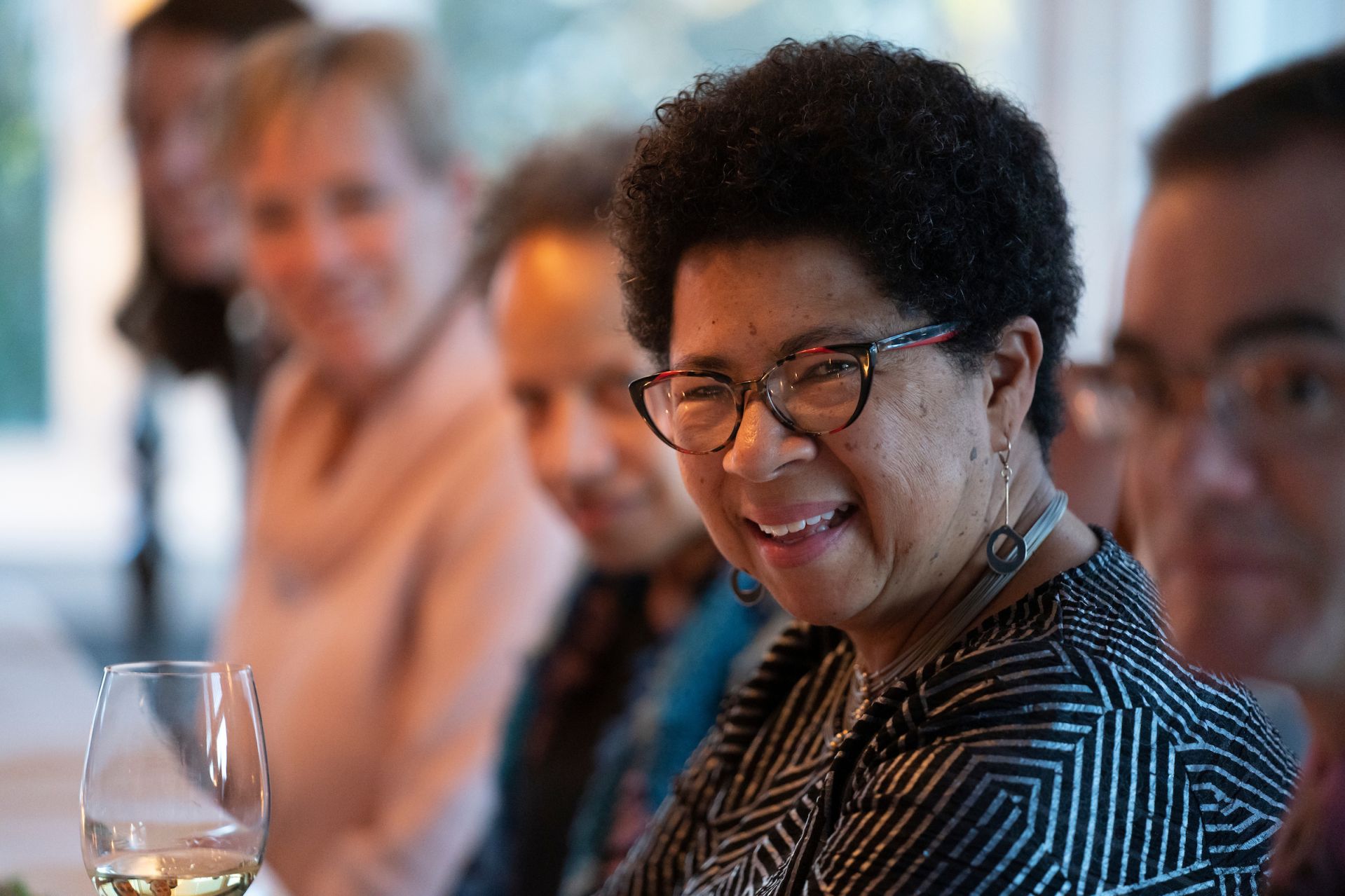 Barbara Ransby joins members of the MLK Day Committee and guests for a dinner at the President’s House hosted by Vice President for Academic Affairs and Dean of Faculty Malcolm Hill. (Phyllis Graber Jensen/Bates College)

Introduced as a “scholar-activist” by Leslie Hill, associate professor of politics, Ransby has both studied and participated in countless areas of activism and social justice, from publishing a book on Ella Baker and the Black Freedom Movement to co-writing the famous New York Times ad “African American Women in Defense of Ourselves,” which protested the U.S. Senate’s treatment of Anita Hill during the Clarence Thomas confirmation hearings in 1991.

Ransby’s address looked at the need for this coupling of scholarship and activism. “I want to wrestle with the challenges of this moment and rely on the past to make sense of the present, to provoke us to reimagine a better collective future,” she said. 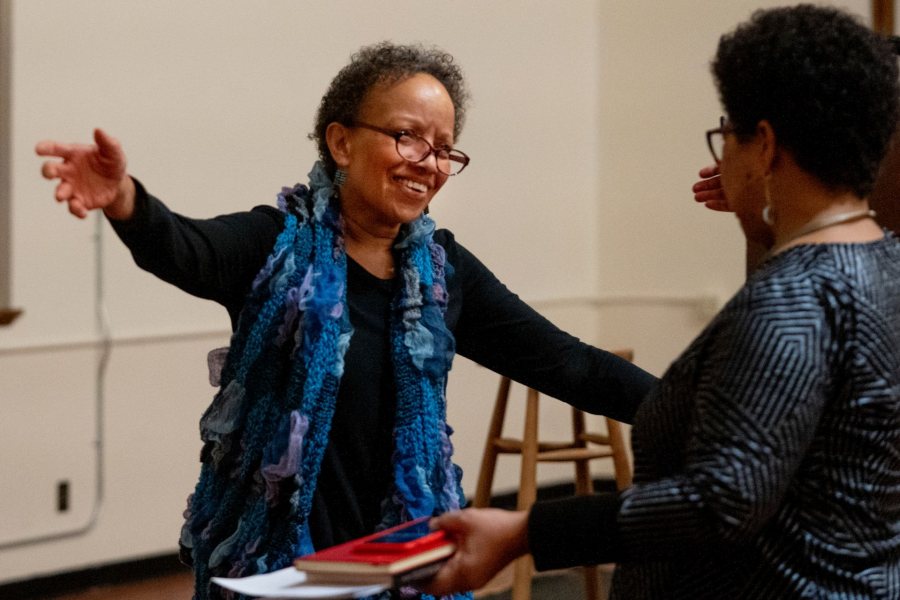 Some of those challenges include the rise of violent white nationalism in recent years, police violence in marginalized communities, and ever-widening economic disparities in the United States.

What exactly do today’s problems have to do with intersectionality, Ella Baker, and the Movement for Black Lives?

“I would argue, everything,” Ransby said.

“Intersectionality has become a rockstar in our political lexicon,” Ransby said. It’s appeared in discourse from the #MeToo movement, Golden Globes speeches, newspaper op-eds, and there’s even a new Institute for Intersectional Studies at Columbia University.

The term was coined in the 1980s by law professor and critical race theorist Kimberlé Williams Crenshaw, and it helps us understand that identities and institutions are not isolated, but interact with and mediate each other.

“Structures of power do not exist in silos, but reinforce and bolster each other in symbiotic relationships,” Ransby said. 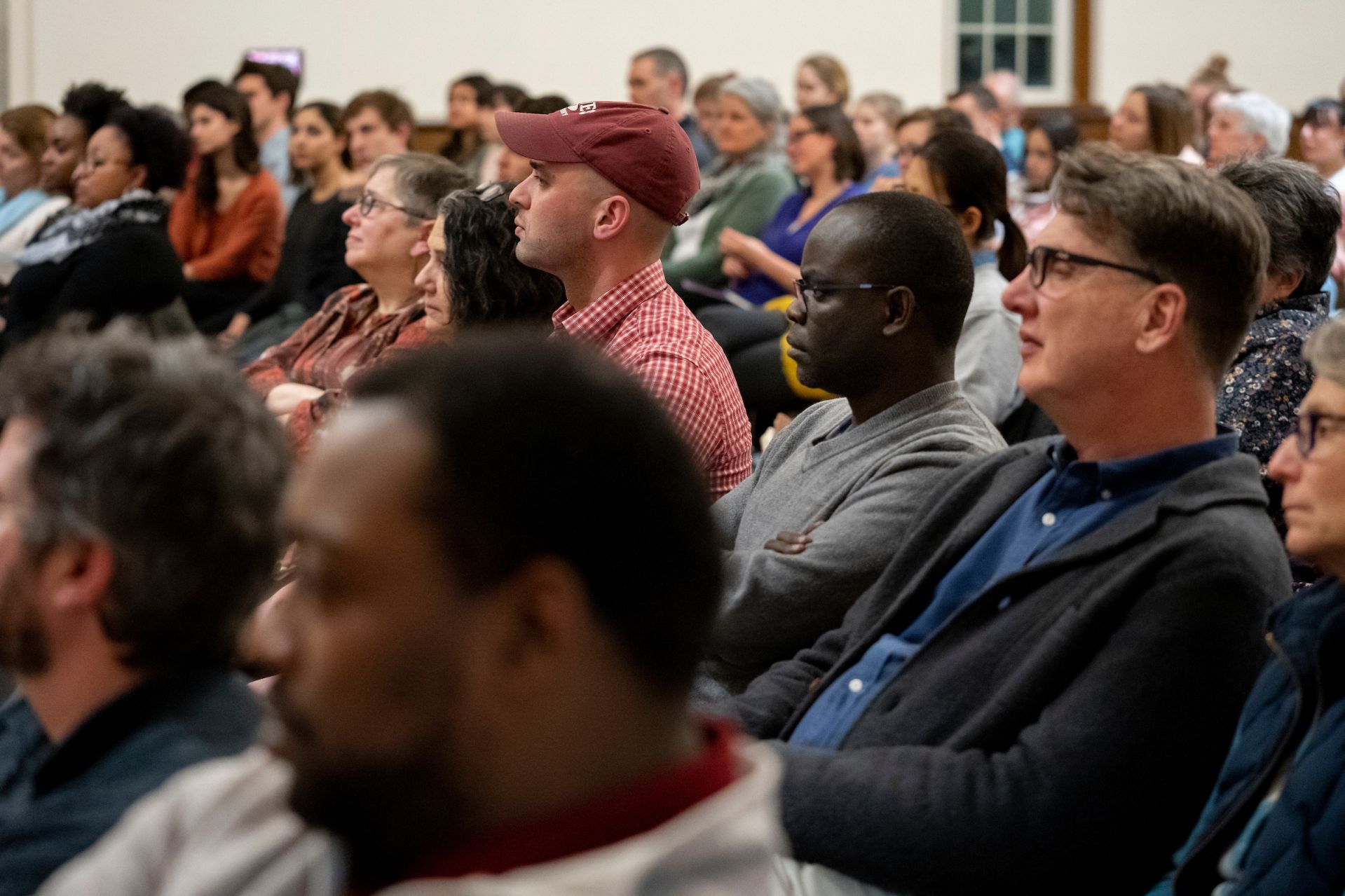 Intersectionality was integral to activism in this country long before Crenshaw came up with the term.

“When Sojourner Truth declared ‘Ain’t I a woman?’ in 1859, pointing out that she was a black mother and unfree worker, her words reflected an intersectional framework,” Ransby said.

Ransby cited the #MeToo movement as a good example of intersectionality, explaining how powerful women in Hollywood incorporated stories of abuse they heard from the National Alliance of Domestic Workers into their narrative.

“Rather than saying, ‘We are all experiencing the same thing as women,’ the #MeToo group appended the domestic workers’ statement to their own as an affirmation that we can be united without glossing over our differences,” Ransby said.

Ella Baker “was intersectional before there was a term for it,” said Ransby, who studied the political organizer for 15 years.

Born in 1903, Baker spent most of her life fighting for the civil rights movement, as well as organizing for various human rights and labor groups.

Labeled by her colleagues as a “difficult woman,” Baker was not afraid to challenge people in her own circles. “She struggled inside the organizations that employed her, demanding more inclusion and democracy and accountability,” Ransby said.

Though an ally of Martin Luther King Jr., Baker criticized his leadership.

“Dr. King once said that leadership flows from the pulpit to the pew, and for Ella Baker it was precisely the opposite,” said Ransby.

Famously quoted as saying, “Strong people don’t need a strong leader,” Baker simply did not believe that a larger-than-life leader was imperative for social change.

As a behind-the-scenes organizer, Baker’s career life and work has many takeaways, including the importance of grassroots organizing, bringing the most marginalized communities to the center of activism, and supporting women in leadership.

“She did not see the movement from King’s mountaintop, but rather from the valleys and back alleys of the struggle for freedom,” said Ransby. 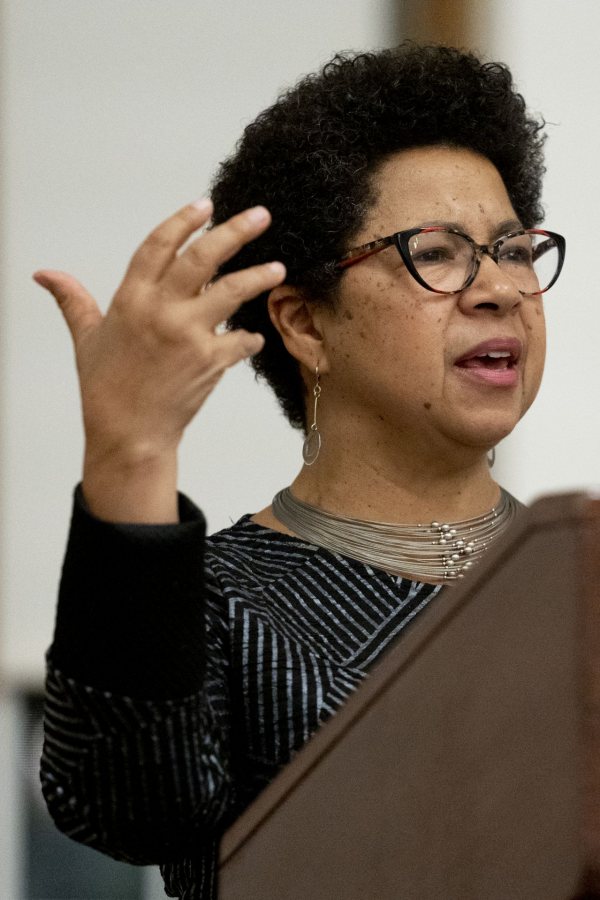 Ransby pointed out that Black Lives Matter, an organization that arose from a 2013 Twitter hashtag, is only one of 50 or so organizations in the Movement for Black Lives coalition.

In addition to national and regional organizations such as BLM and Black Youth Project 100, there is an “entire ecosystem of local organizations that have sprung up in response to killing after killing of black people,” Ransby said.

These groups, in the spirit of Ella Baker, engage in behind-the-scenes work, using social media to engage and mobilize their bases in response to murders.

Calling these groups “political quilters,” Ransby explained that they do the unseen, yet vital work of tactical training for protests, tech support, and communications.

“We see spontaneous protests and think they come out of thin air, but in order to be sustained, people have to do skill-sharing and serious planning,” said Ransby.

The Movement for Black Lives has also rejected the politics of respectability, which Ransby described as supporting middle-class imagery of hard-working, wholesome, church-going people. 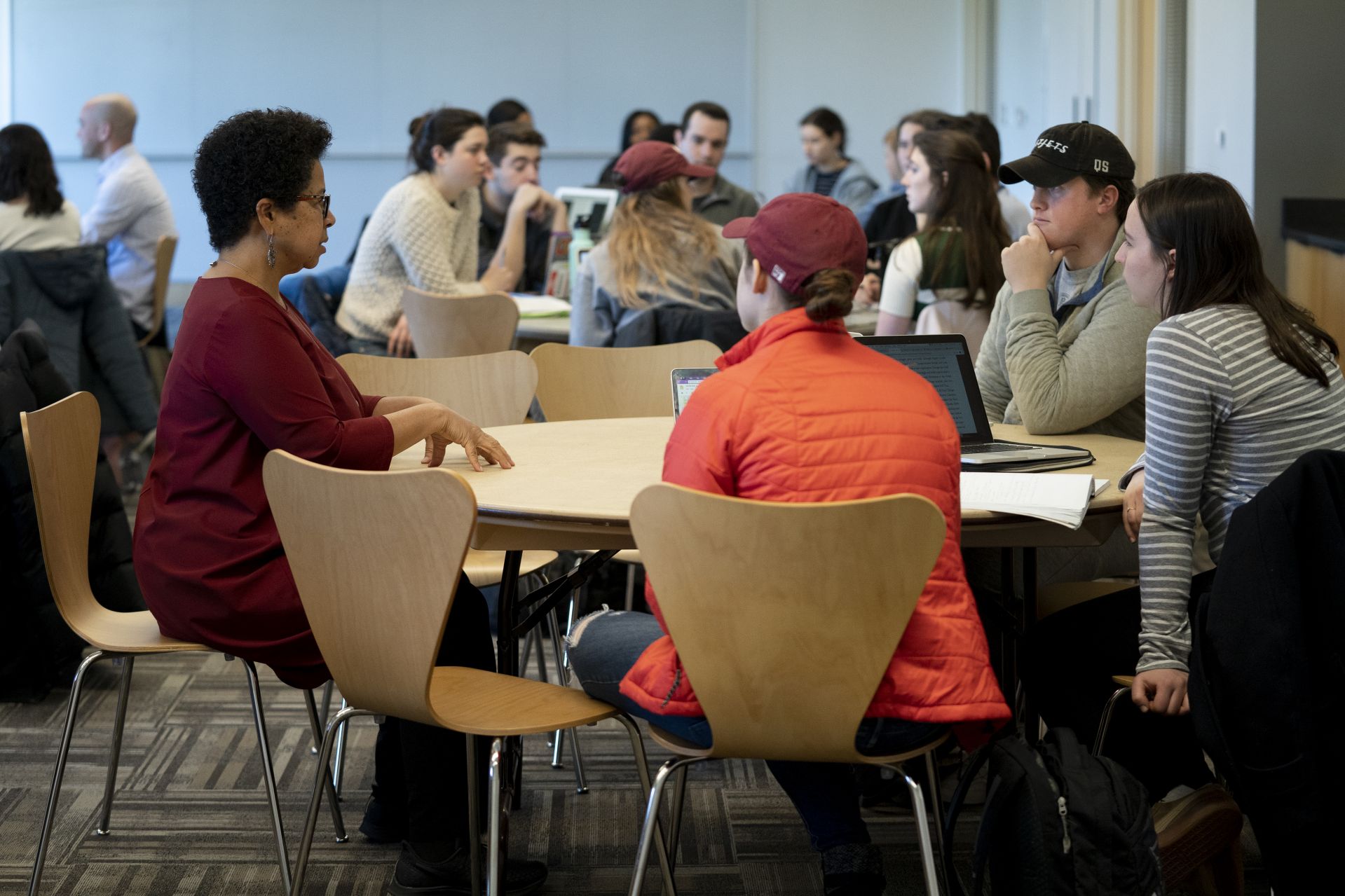 In summary, she explained that the movement seeks change not just for black people, but for everyone affected by today’s injustices. By using a bottom-up power structure of organizing and including intersectional practices in their mission, the movement is what Ransby calls “a visionary force for transformative change.”

“The Movement for Black Lives has connected to the past, affirmed an intersectional practice in the present, and has been a visionary force calling for certain kinds of transformative change,” she said.