On April 5, 1855, Oren Cheney presided over the very first meeting of the board of trustees of his new school, the Maine State Seminary, which would become Bates College by 1864.

At the time, the school was a paper tiger, and just barely. Its hard-won charter had been granted by the Maine Legislature just three weeks prior, on March 16. Much more than symbolic, the April 5 gathering marked the actual establishment of the corporation — the establishment of Bates, in a real sense.

Then as now, April is mud season in Maine, and travel to Augusta was likely difficult for those founding trustees. For that or other reasons, by the meeting’s scheduled start time of 10 a.m., only 14 of Cheney’s 28 trustees— one shy of the required majority— had arrived for the meeting.

The location of the meeting, in Augusta, at a new Freewill Baptist church on State Street for which Cheney served as pastor, typified the resolve that Cheney would bring to bear in founding Bates.

Three years earlier, the little church was in disarray and had already disbanded once. Yet Cheney agreed to be its pastor. “The call here had little money in it,” recalled Cheney, “hardly enough to keep soul and body together, and the hardest of work.”

Appointed in June 1852, Cheney immediately raised money for a new building, which was funded, built, and dedicated, debt-free, just 17 months later at a cost of $5,600.

This tree-filled yard (center) on State Street in Augusta is the likely location of the Freewill Baptist Church and the first meeting of the trustees of the Maine State Seminary on April 5, 1855. (Jay Burns/Bates College)

Minus one trustee needed for a majority, Cheney didn’t just sit and stew. He sent a text, 1800s style, firing off a telegram to one wayward trustee, Joshua Haskell, in Topsham, about 30 miles south. “We lack one trustee to make a majority — come in the next train,” Cheney pleaded.

Luckily, a 15th trustee (not Haskell) soon breezed through the door of the Freewill Baptist church, and the meeting got underway. Lasting until 11 p.m., it was “harmonious and pleasant without exception,” Cheney said, noting that the trustees adjourned the meeting knowing that an existential decision, choosing the school’s location, awaited them at their next meeting in June. 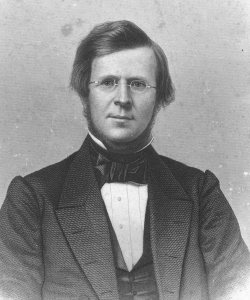 When you’re trying to launch a new college, as Oren Cheney was doing on this day in 1855, you sweat the details. A former member of the Maine Legislature, Cheney had famously kept watch over the bill for the seminary charter as it made its way through the Legislature, hand-delivering the bill to the governor’s office for signing the month before.

You also don’t suffer fools, and you watch your money.

So naturally, Cheney didn’t forget about the cable he’d sent to Brunswick (the closest telegraph office to Topsham), nor the 20 cents he’d spent on it.

Turns out, the telegraph office had dumped Cheney’s urgent message into the outgoing mail rather than deliver it immediately to Haskell. “There it remained for hours until the cars [trains] had passed,” Cheney wrote in his regular column in The Morning Star, a Baptist newspaper.

Indeed, Cheney devoted a good portion of his April 18 column to calling out the Brunswick telegraph office. “We mention this to put the public on guard,” he wrote. “We can send a letter to Brunswick for 3 cents — the dispatch cost 20 — and both of them, in the case presented, would be money thrown away.”

As for the Freewill meetinghouse at 43 State St., it is long gone. The church merged with another Baptist church in Augusta in the 1920s to form the Penney Memorial United Baptist Church.

What remains on the site today is a wooded lot between two historic buildings that also date to the mid-1800s. After the church merger, the building was later home to a building contractor (whose structures, among others, included “car barns,” for trolley cars) and, by the 1920s, an Oldsmobile dealership.

It was razed some time after 1936, as it is mentioned as still standing in the college history Bates College and Its Background.

Sources for this story included the Kennebec Historical Society, Muskie Archives and Special Collections Library, the Lithgow Public Library in Augusta, and the Bureau of Assessing in Augusta.