A few years ago, April Hill was a leader of efforts to level the playing field for students in science and math at the University of Richmond.

The goal was to shake up curriculum and teaching practices such that students from groups underrepresented in so-called STEM fields — disciplines in science, technology, engineering, and mathematics — had the same opportunities to thrive as their affluent white counterparts.

In working toward that goal, Hill learned a lot.

“The most important lesson was that we had to move away from assumptions that students are lacking: lacking preparation, lacking background knowledge, lacking skills, lacking maturity, lacking discipline, lacking grit, lacking — fill in the blank,” Hill told a Bates audience on April 29. 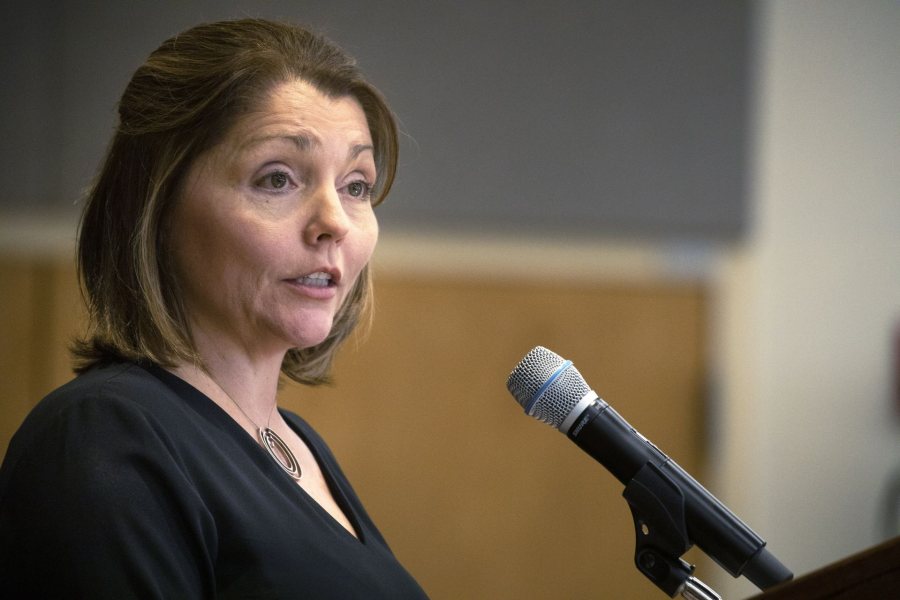 April Hill speaks in a Pettengill Hall classroom during an April 29 event celebrating her appointment as the Wagener Family Professor of Equity and Inclusion in STEM. (Theophil Syslo/Bates College)

It’s on the institutional side of the ledger, instead, where the gaps appear. At Richmond, “we needed to move toward the truth that our learning environments are lacking: lacking inclusive pedagogies, lacking strategies to help students reflect on their learning, lacking diverse and reflective practitioners, lacking transparent assignments and evaluation criteria.”

Hill, whose own scientific research is in evolutionary genetics, now leads a comparable charge at Bates. Last fall she became the college’s inaugural Wagener Family Professor for Equity and Inclusion in STEM, an appointment celebrated with her address Monday to a packed Pettengill Hall classroom.

Hill used the occasion to describe programs that made a difference at Richmond and to share the stories behind insights that have helped make her a nationally recognized expert in helping all STEM students move, as her talk was titled, “from surviving to thriving.” 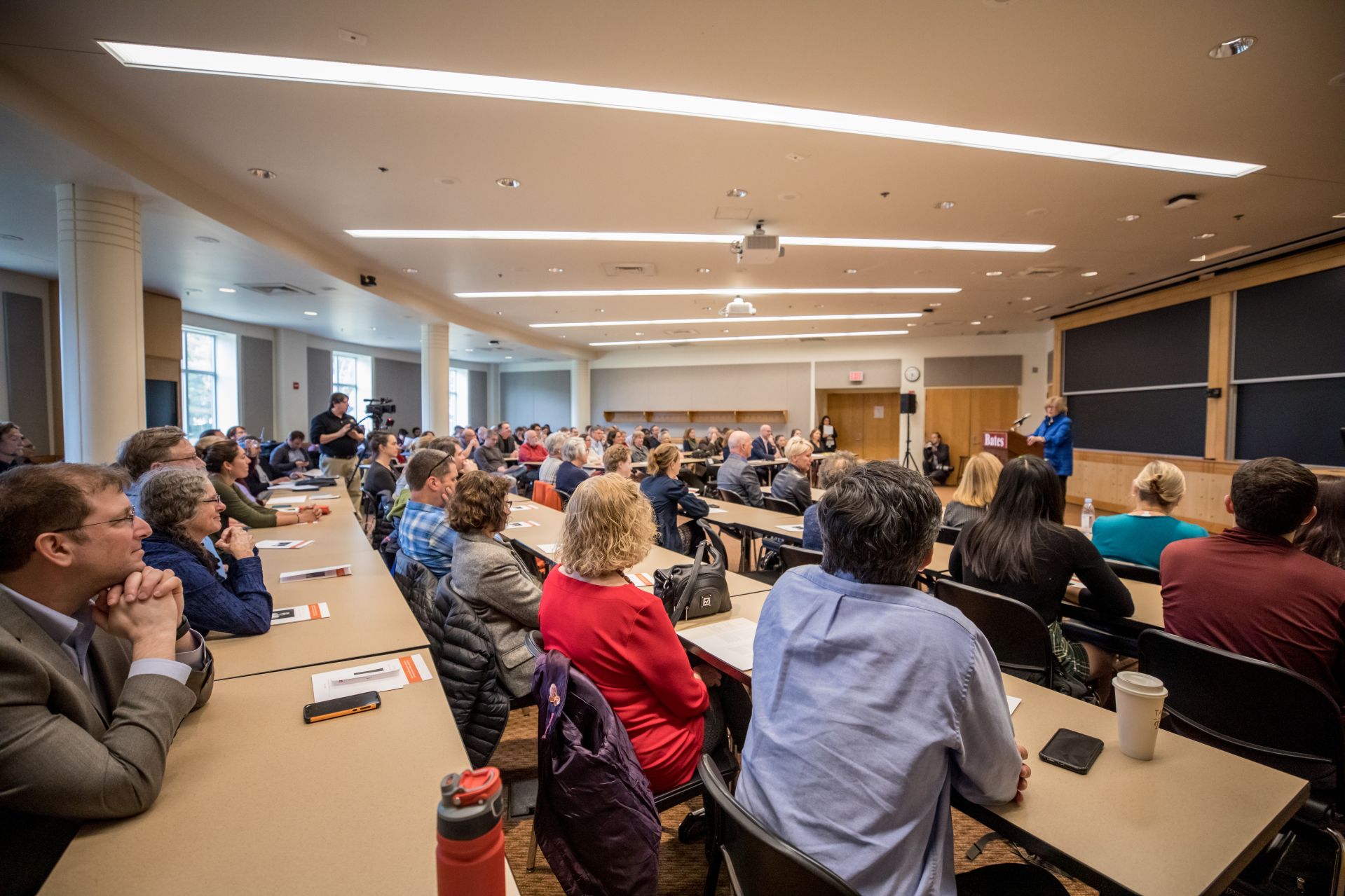 For Hill, it was “a giant relief” to learn about deficit-model thinking, as racial justice theorists label the presumption that marginalized groups inherently lack certain qualities. Why a relief? Because, in contrast to other manifestations of systemic racism in the U.S., faculty and staff in academe “can definitely do something about our learning environments.”

She declared, “We must rebuild our education system on evidence-based practices, de-centering white privilege, and letting go of old notions of how science and math instruction is done.”

At Richmond, with initial support from the Howard Hughes Medical Institute, Hill and a few colleagues set out in 2013 to address institutional deficits by piloting a course. SMART — or “Science, Math and Research Training” — was created for first-years and combined the traditional introductory courses in biology, chemistry, and calculus into a yearlong program including labs.

“The course was designed for students who were traditionally underserved in STEM, but this was not a remedial course,” Hill told her Bates audience. “We expected that with the right learning environment, our students could succeed and be ready for the second-year STEM curriculum even if their high school preparation did not indicate that they’d likely be successful in our traditional courses.”

Here are some salient SMART characteristics:

Of the 21 students in SMART’s first year, Hill said, all proceeded to a second-year STEM curriculum, and 85 percent graduated in a STEM major. Enrollment in SMART has grown in the years since its inception, sections have been added, and student success has remained robust, with 85 percent staying in STEM and half being on track to graduate with a STEM degree.

Asked about their experience with SMART, “in particular their belief in their own abilities as scientists and mathematicians, students indicate confidence, determination and other aspects of thriving,” Hill said. Moreover, the course “helped transform other parts of the STEM curricula. And it has helped to attract a more diverse and equity-minded set of faculty, staff, and students.”

A different kind of life

Hill’s early years were turbulent. At age 3, her father away fighting in Vietnam, Hill’s mother died in a car crash. Her father’s readjustment to civilian life was troubled, and “as his life spiraled out of control, so did my childhood,” Hill told the Bates audience.

“Like so many other first-generation college students, going to college represented important opportunities for me to build a different kind of life.” 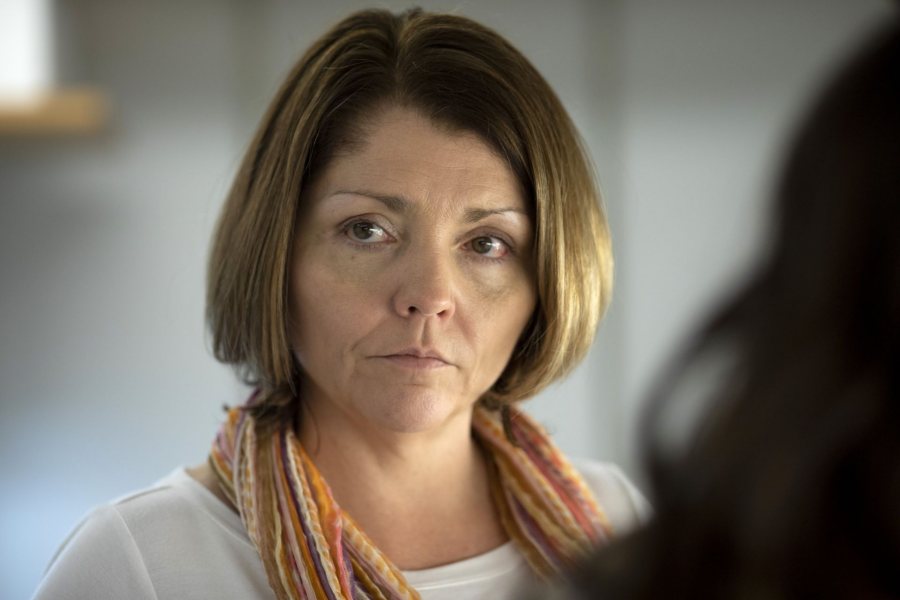 April Hill is shown during a session with students in her Carnegie Science Hall biology lab on April 25. “For me, it’s like being a coach,” she says. (Phyllis Graber Jensen/Bates College)

Hill arrived at the University of North Texas as a homeless emancipated minor, living out of her car. She had done well in high school, but high school didn’t do well by her — the school was “rural and poorly performing,” she told the Bates audience, and didn’t prepare her adequately for college academics.

“My days as a student and my early career showed me that, like me, there were many students who continue to struggle in STEM, who left feeling like they didn’t have the ability or support to pursue their interest. And I was, and continue to be, disturbed by how many students are not thriving.” 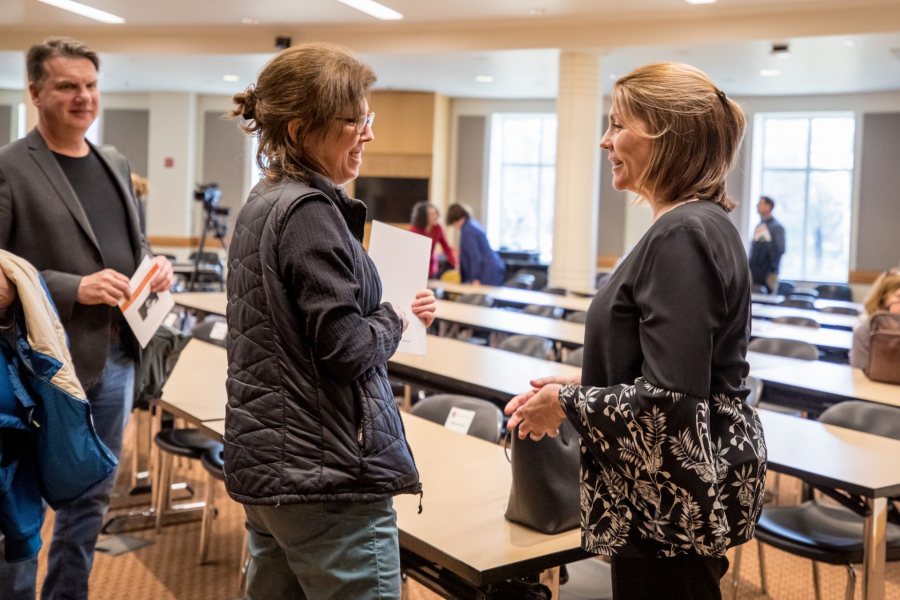 Captivated by science, Hill struggled past barriers familiar to many first-gen students in STEM. She made it through thanks both to a chemistry professor who recognized her potential and to what Hill calls her own “growth mindset”: “I believed that I could get smarter and become a better problem-solver.” (Hill acknowledged in her talk that for all the challenges she faced in college, being white conferred advantages not enjoyed by students of color.)

That growth mindset got her to the University of Houston, where she earned a doctorate in biology with a focus on human genetics; to a postdoctoral position in molecular and developmental biology at Harvard Medical School, where she began her current line of research; and to faculty chairs at Fairfield University and then Richmond.

Like many others, Hill was attracted to Bates because “women and people of color were not excluded from admission, even at Bates’ inception,” she said. 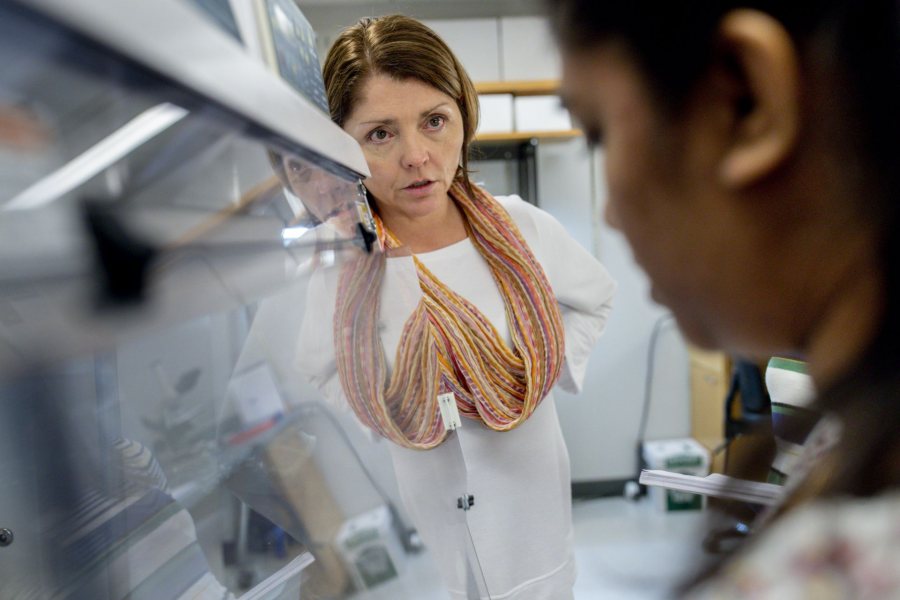 And like others, Hill has learned that success at Bates for those groups was elusive early on, and even today the college is grappling with institutional roadblocks that confront students of color, especially when it comes to STEM fields — hence Hill’s appointment.

While STEM degree attainment for Bates students overall “is among the highest in the nation,” with nearly 60 percent of STEM-interested students graduating with STEM degrees, Hill said that it’s a different picture for groups underrepresented in the sector.

“In the past decade, only 41 percent of first-generation students interested in STEM obtain STEM degrees,” she said, and the rate falls to 38 percent for the lowest-income students and 23 for black students.

Hill made sure to spotlight the college’s escalating efforts to address inequities in STEM training as well as other fields, from a $1 million HHMI Inclusive Excellence grant to conferences to a series of intensive racial justice trainings recently held for STEM faculty and for staff in several departments. 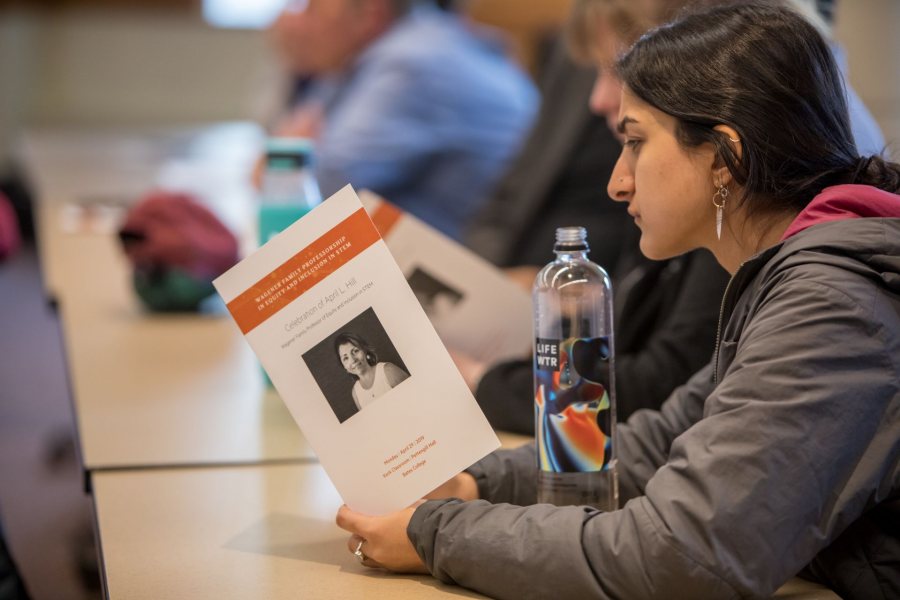 A student peruses the program for April Hill’s April 29 lecture on equity and inclusion in STEM. (Rene Roy for Bates College)

But, she said, “It’s time for us to take responsibility for ensuring the successful outcomes for our STEM students by revising our curriculum and pedagogical practices, and examining our mindsets and biases so that all students have the opportunity, freedom and resources to thrive in STEM.”

Hill concluded, “While we do have much work to do, I believe that Bates can become a leader among its peers in supporting student success and thriving in STEM. I’m truly honored to be part of this endeavor.”

In her welcome, Bates President Clayton Spencer told the story of the new chair. She noted that “in typical fashion, it centers on the creativity, persistence and courage of a Bates student, now an alum.”

That alumna is Sophie Wagener ’17, a biology major from Pasadena, Calif. In talking with Bates about a potential gift to The Bates Campaign two years ago, Sophie’s parents, Deborah Heitz and Shaw Wagener, “very graciously let us know this gift would need to be driven by Sophie.” 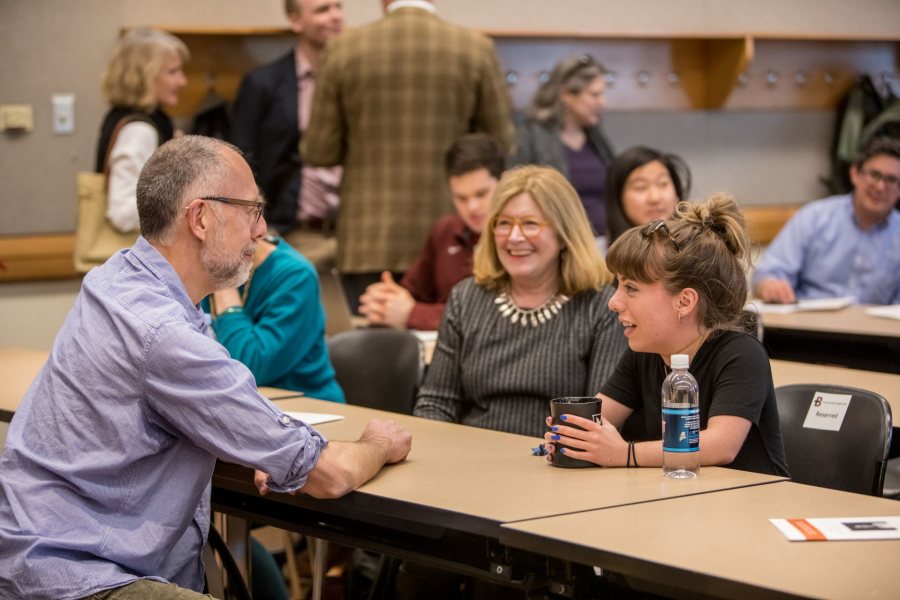 In subsequent discussions with Spencer and others at the college, Sophie recalled some close friends from marginalized groups who had hoped to dedicate themselves to science at Bates, “only to reroute themselves out of science altogether early on.”

She was clear: In science and math, the Bates curriculum and teaching were not supporting all students equally for success.

Her declaration coincided with the college’s preparing a successful application for its HHMI grant, geared toward improving support for all students in STEM. “Sophie’s experience with her friends was mirrored in our institutional data,” Spencer said.

Initially, Bates proposed that the Wagener family gift would provide program and staff support for equity and inclusion in STEM. “Sophie listened very alertly and politely, and then, with great poise and finesse, told us we were missing the point entirely.”

It would take a faculty leader, she explained, to effect meaningful change in the academic workings of a college. The Wageners “were unwavering in their view of the obvious,” Spencer said. “We could not expect to make progress in the absence of credible academic leadership.

“So the Wagener Family Professorship of Equity and Inclusion in STEM is the very happy result.”

Cheers for the Chairs: Dykstra Eusden ’80 appointed to Whitehouse Professorship