A two-hour ABC News special looking at Americans’ relationships with screens included an interview with Lecturer in Education Anita Charles, who has studied the effects of cellphones on classrooms.

The special, ScreenTime, aired May 3. 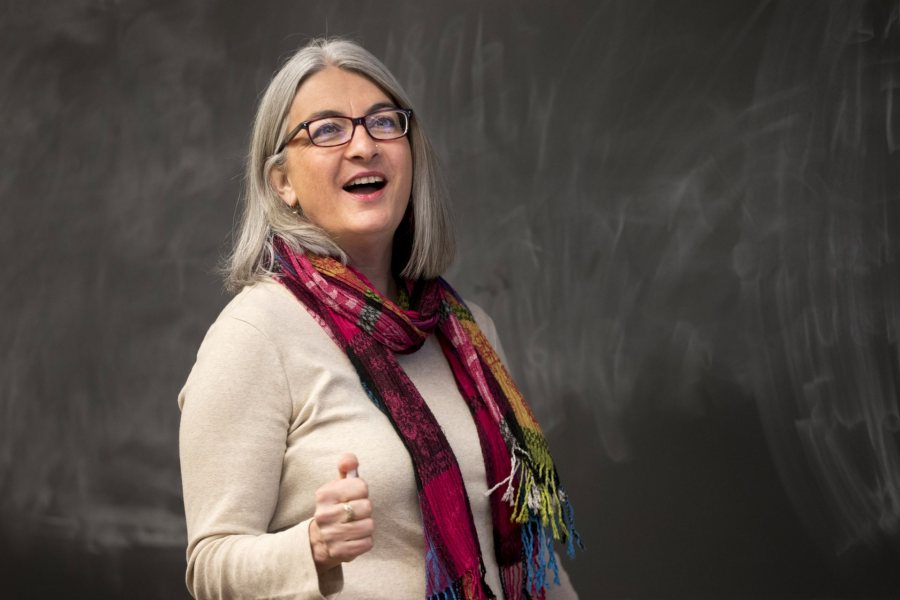 Speaking to the Lewiston Sun Journal about the interview, Charles said, “We need to just be mindful and aware. We are trying to figure out things together.”

What’s more important than setting hard limits on screen time is that parents, schools, and communities provide a sense of balance and listen to their kids.

Mac Cerullo of The Daily News in Newburyport, Mass., profiled Matt Bazirgan ’00, who as director of player personnel for the Houston Texans ran the team’s scouting ahead of the NFL draft.

In the recent draft, Bazirgan looked not only for talent to improve certain aspects of the Texans’ game, but for people who would fit well among the players already on the team.

“I think it’s always a match for your team,” he told Cerullo. “There’s always intriguing guys on the board that you may have been really excited about watching on tape, but it’s like OK, with our current roster if we draft this guy and put a high-end asset for a second- or third-round pick, but it’s a luxury, how are you helping the locker room? How are you helping the current team?”

Sarah Rothmann ’19 of Andover, Mass., was profiled by The Eagle Tribune, which chronicled the athlete, educator, and journalist’s personal and athletic journey through Bates.

Rothmann, a standout high school runner, arrived at Bates shortly after the death of her father, and as a result considered quitting cross country and track. Over the next several years, however, she learned to focus less on times and more on health, teamwork, and relationships. 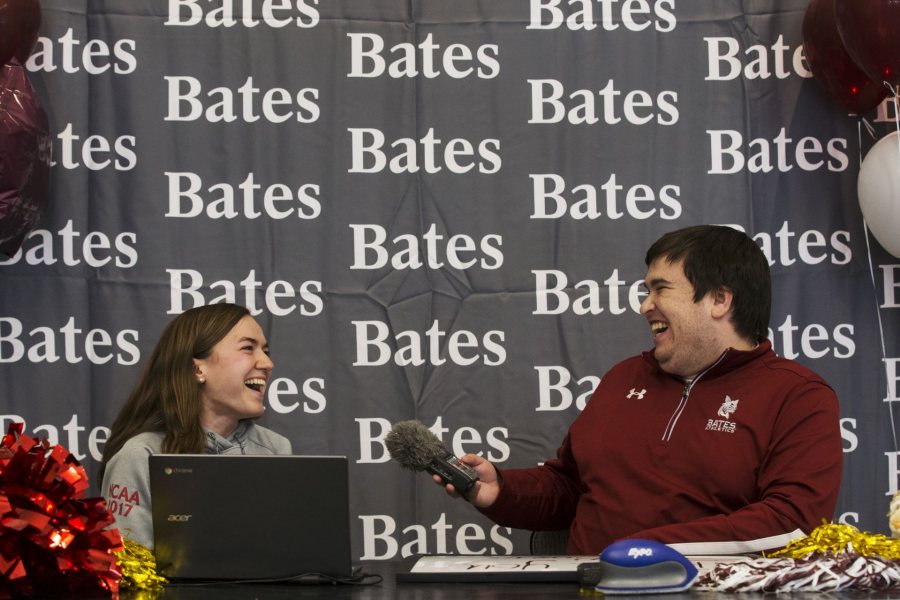 On the 2018 Great Day to Be a Bobcat broadcast, Sarah Rothmann ’19 talks to Assistant Sports Information Director Aaron Morse about her work on The Bates Student. (Theophil Syslo/Bates College)

“I realized that I had to be more balanced in my life, that there is more to it than running and I had to take advantage of the opportunities I had at Bates,” she told reporter Dave Dyer.

Rothmann majored in English and became sports editor and then editor-in-chief of The Bates Student. Next year, she’s off to the Czech Republic on a Fulbright English Teaching Assistant grant.

Photographer Andree Kehn of the Lewiston Sun Journal documented the President’s Cup, an annual Bates-hosted regatta that saw competition from Bowdoin, Colby, and the University of Maine.

Bates won the regatta handily, with the women’s rowing team winning all six of its races and the men winning four.

Rachel Kirkland of WashingtonExec reported that Daniel Hoffman ’85, who recently retired after 30 years in the intelligence community, is giving back to a mainstay of his college career and life beyond: swimming.

He’s now a senior adviser for the International Swimming League, comprising swim teams from the United States and several European countries. A swimmer at Bates and a coach for many years afterward, he wants to raise the profile of elite swimming between Olympics.

“There is a supply of elite swimmers who frankly aren’t receiving any of the financial compensation that they should be receiving because there aren’t opportunities to continue swimming during those four years (between Olympics) unless you’re in a college program,” he told Kirkland.

Providence Cicero of Pacific NW Magazine profiled Robin Leventhal ’88, an artist and chef who rose to the top of Seattle’s restaurant scene before making her way to Walla Walla, Wash.

Leventhal studied art at Bates but developed an interest in cooking. She opened a respected restaurant on Capitol Hill and even competed on Top Chef, but health and other issues forced her to close the restaurant. 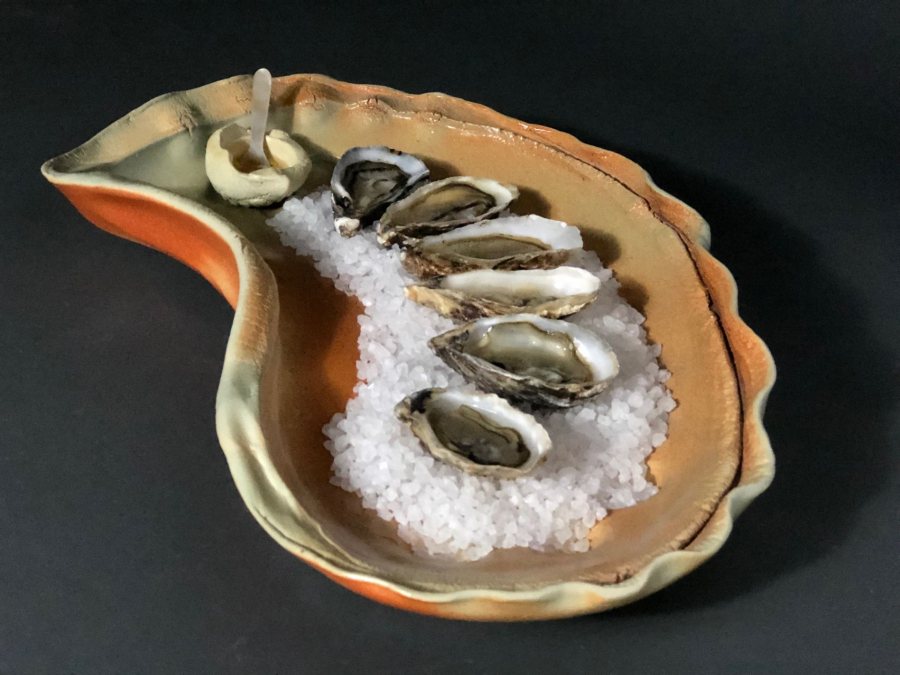 Leventhal found a culinary school job — and, she told Cicero, contentment — in Walla Walla. In addition to cooking, she maintains a ceramics studio, creating, among other, things a line of oyster plates.

Both pottery and cooking, Leventhal said, are “craft-driven. It’s mastering a craft, then elevating it.”

Oregon’s ‘Pinot in the City’ comes to Boston — Boston Herald

When “Pinot in the City” comes to Boston, the touring display of pinot noir wines from Oregon’s Willamette Valley will include two produced by Bill Sweat ’79 and his wife, Donna Morris.

Sweat told Boston Herald reporter Jim Campanini that he and Morris were working in financial services in Boston when their adventures in the city’s burgeoning restaurant scene inspired them to open a winery in Oregon. The pinot makers travel together to introduce laypeople to Oregon wine.

“The collegiality and collaboration of winery owners is incredible,” Sweat said. “We realize that if a Willamette Valley wine achieves success, we can all benefit from it.”

Inspired by the sight of a great white shark Allen saw as a teenager, The Line Tender tells the story of a young girl who, in the midst of grief, must become a metaphorical “line tender,” holding the line that guides her loved ones through murky waters.

Allen told Grossman she hopes the book will help young people understand that “difficult things are going to happen in life. Hard, hard times are inevitable.

“The power of the story is that we can adjust, adapt, find a way to move forward.”

As Sri Lanka Goes So Goes the World — Literary Hub

In the wake of the devastating Easter Sunday bombings across Sri Lanka, writer and journalist Ru Freeman ’94 and her daughters, Duranya and Hasadri, wrote about their reactions to the terrorist attacks and their Sri Lankan heritage for Literary Hub.

Ru Freeman argued that the violence was not a local problem, but a global one. The world’s response, she said, must be one of solidarity — using as a model the Sri Lankans of all religions who supported each other after the attacks.

“As we consider these attacks, we must dwell on the potential for darkness among us,” Freeman wrote. “It is not something that can be addressed piecemeal, by governments but collectively, as global citizens.” 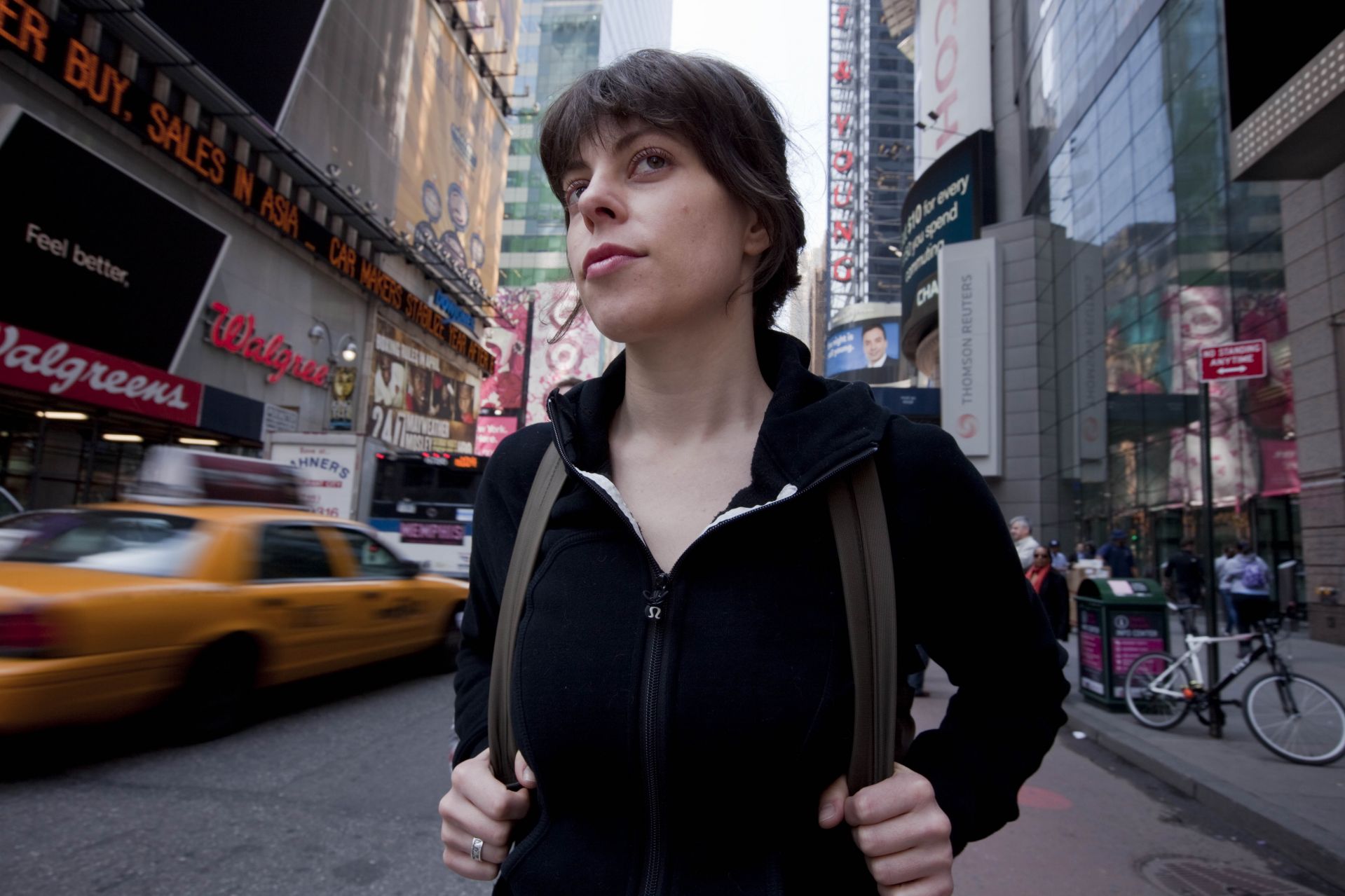 Arbus is a longtime off-Broadway director who has worked on the Campfire Project, which staged a theater production at a refugee camp in Greece.

She is currently a resident artist at the nonprofit company Theater for New Audience, which produces Shakespeare and other classic plays. That’s how she met playwright McNally, who asked her to direct the two-character Frankie and Johnny.

Arbus sees many parallels between Frankie and Johnny and Shakespeare’s characters. “The territory is existential,” she told LaDuke. “There are these two middle-aged, world-weary, isolated souls who, in Frankie’s case, no longer believes that her dreams are possible, that she is [never] going to have a serious relationship with a man, who’s at a loss for what has meaning in her life.”