Getting Here From There Dept.: The next few weeks are bringing partial closures of the two side streets — Bardwell to the east, followed by Nichols to the west — that flank the Bonney Science Center construction site.

The closures will affect only the stretches of each street adjacent to the site, where they intersect with Campus Avenue.

In fact, that end of Bardwell has been closed since last week, on account of a giant crane in the middle of it. Even bigger than the crane that subcontractor H.B. Fleming brought up in June, the second unit has joined the first in driving so-called pipe piles that will help support the building foundation.

At the moment the crane-come-lately is assigned to driving piles at the east and west ends of the site. The job, though, is a bit different from what’s gone before, as Consigli Construction, the firm overseeing the project for Bates, has in effect opened a second front. 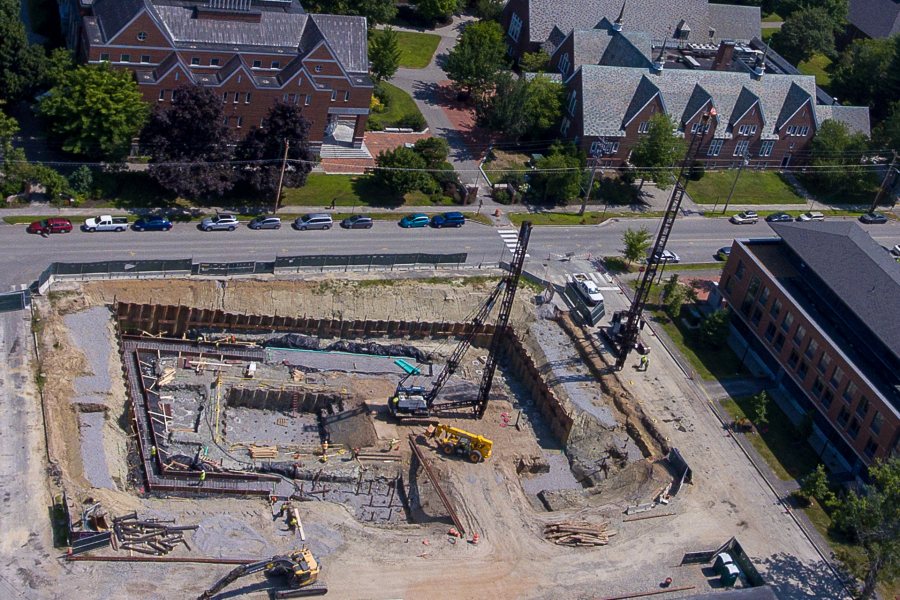 Russ Dillingham, chief photographer for the Lewiston Sun Journal, captured this aerial image of the Bonney work site on Aug. 1. “I launched the drone for these photos from Fred Hall Sr.’s house just up Franklin Street as he watched in awe.” says Dillingham. “I remember standing in the same spot watching him in awe throwing a baseball and football to us a half-century ago. Scary but comforting.” (Russ Dillingham/Sun Journal aerial photo)

Previously all the piles were going into the deep hole that will become the science center’s basement. But the building footprint will actually extend beyond the basement to the east and west, and those extremities also need some extra support. So the second crane is driving piles to support those foundation components. The process is the same — the difference is the shallowness of the excavations at the ends. (They’re perfectly nice, just shallow.)

By Tuesday, July 29, piledriving at the east end was well underway, with more than a dozen at least partially sunk.

That’s not the only way the project team has sped up the piledriving, which had been challenged by the extra length of each pipe needed to provide sufficient foundation support — that is, the length needed to meet refusal, in the jargon of the trade, and sink no further.

We wrote previously about positioning each pipe in the basement hole, welding a second pipe onto it for the required length, and then having welds inspected. Tick tock! Now Consigli has taken that time-consuming process out of the hole, where room to work is shrinking as the foundation preparations are expanding. 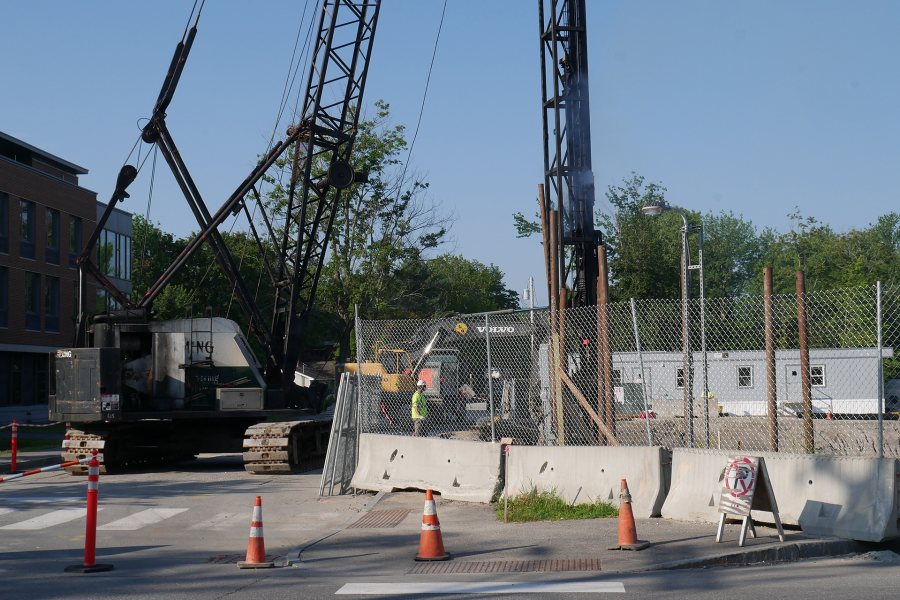 “The Consigli team quickly learned that when the pile splicing was being done vertically in the hole there was a lot of other work that was being blocked and delayed,” explains Chris Streifel, Bates’ project manager for Bonney Science. “It’s a big gain in efficiency to get the pre-splicing going effectively.”

A few weeks ago welders began fabricating 60-foot pipes up at ground level in the adjacent service area, at the south end of the site. And then, speaking of second fronts, a welding team from Warren Mechanical of Portland, Maine, set up an additional pipe-splicing operation at the college’s off-campus storage site, a few blocks away on Strawberry Avenue.

Now all of the horizontal splicing is taking place at Strawberry Avenue, where the crew can make up 10 or 12 piles daily. “You weigh the benefits of taking up a lot of real estate with the welding operation and impacting other work that you’re trying to do, vs. dealing with transportation” from Strawberry Avenue, Streifel says. “This is what made sense as they refined their process. 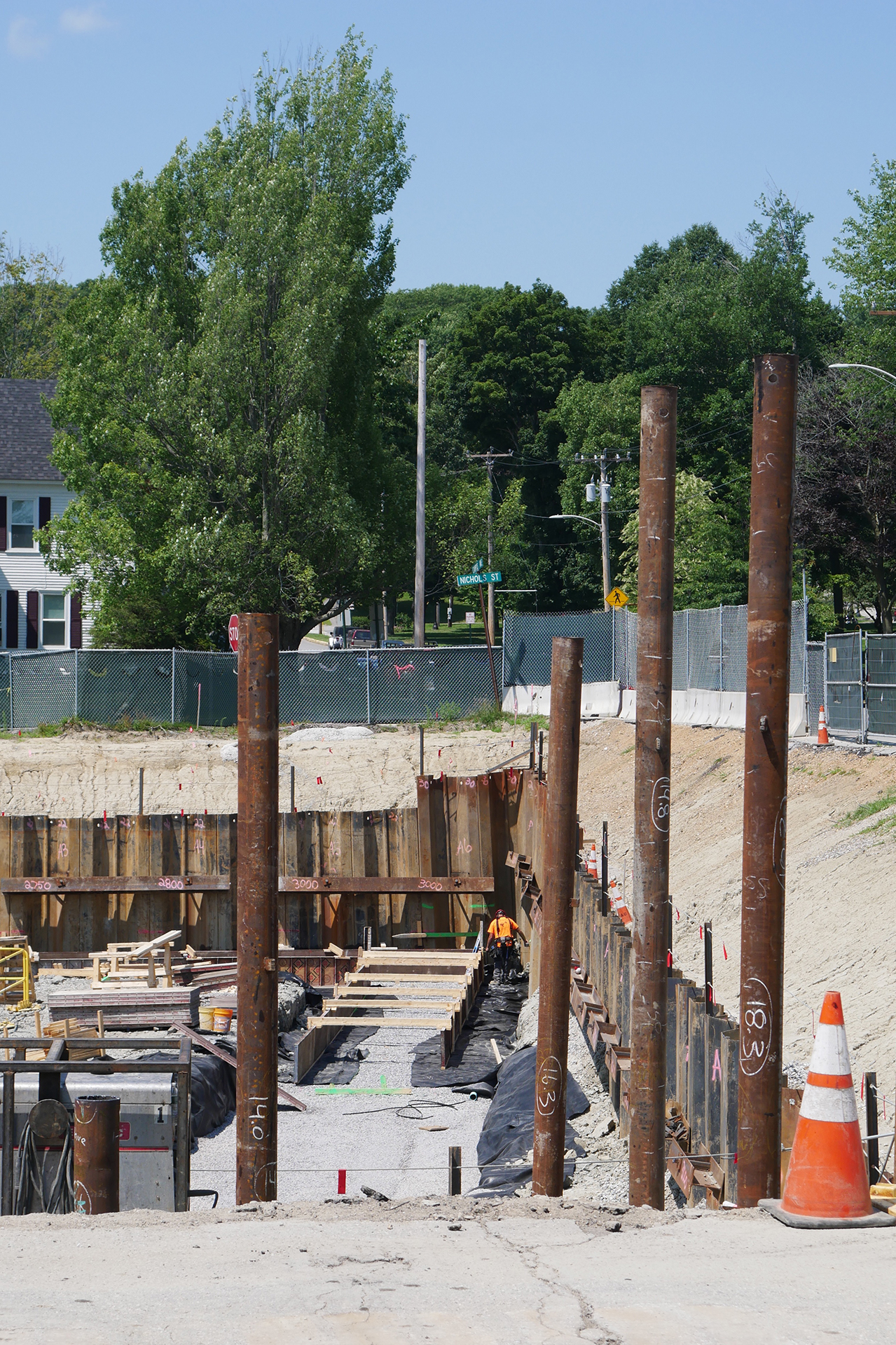 The way things stood at the Bonney Science Center site on July 30, 2019: In the foreground are freshly driven pipe piles at the easternmost end of the site. At the lower center are newly placed forms for concrete foundation footings. (Doug Hubley/Bates College)

“So much of what’s been happening over the past couple of weeks is figuring out what works, where the points are that can be more efficient, and where more resources are needed to keep the overall workflow smooth.”

The welders developed a good productive rhythm, says Jacob Kendall, Bates’ construction administrator (a position formerly called “clerk of the works”). “That production needs to sustain itself because they’re using both cranes.” With fewer than 100 piles left to drive, each crane will be able to do 10 or 12 daily once they’ve hit their stride, he says.

The second crane works faster than the first, thanks to a more forceful piledriving hammer. That larger hammer also changes the criteria for declaring refusal. If the pipe doesn’t move an inch after five blows from this hammer, that’s refusal. It’s 14 blows for the original crane.

There’s an important difference in rigging between the cranes, too. The first has what’s called a fixed-lead derrick: A framework connects the chassis of the crane to the base of the derrick, giving it a fixed angle of approach to the pile. The advantage is that by restricting the derrick motion, it concentrates the pile-driving force where it belongs instead of wasting energy in off-axis motion.

The second crane, in contrast, uses a “flying lead” — the pile-driving rig is not braced at the bottom. This gives the crane much more flexibility in positioning the hammer.

So from the pipe pile’s point of view, the new crane means that you can get conked on the head both harder and from farther away. 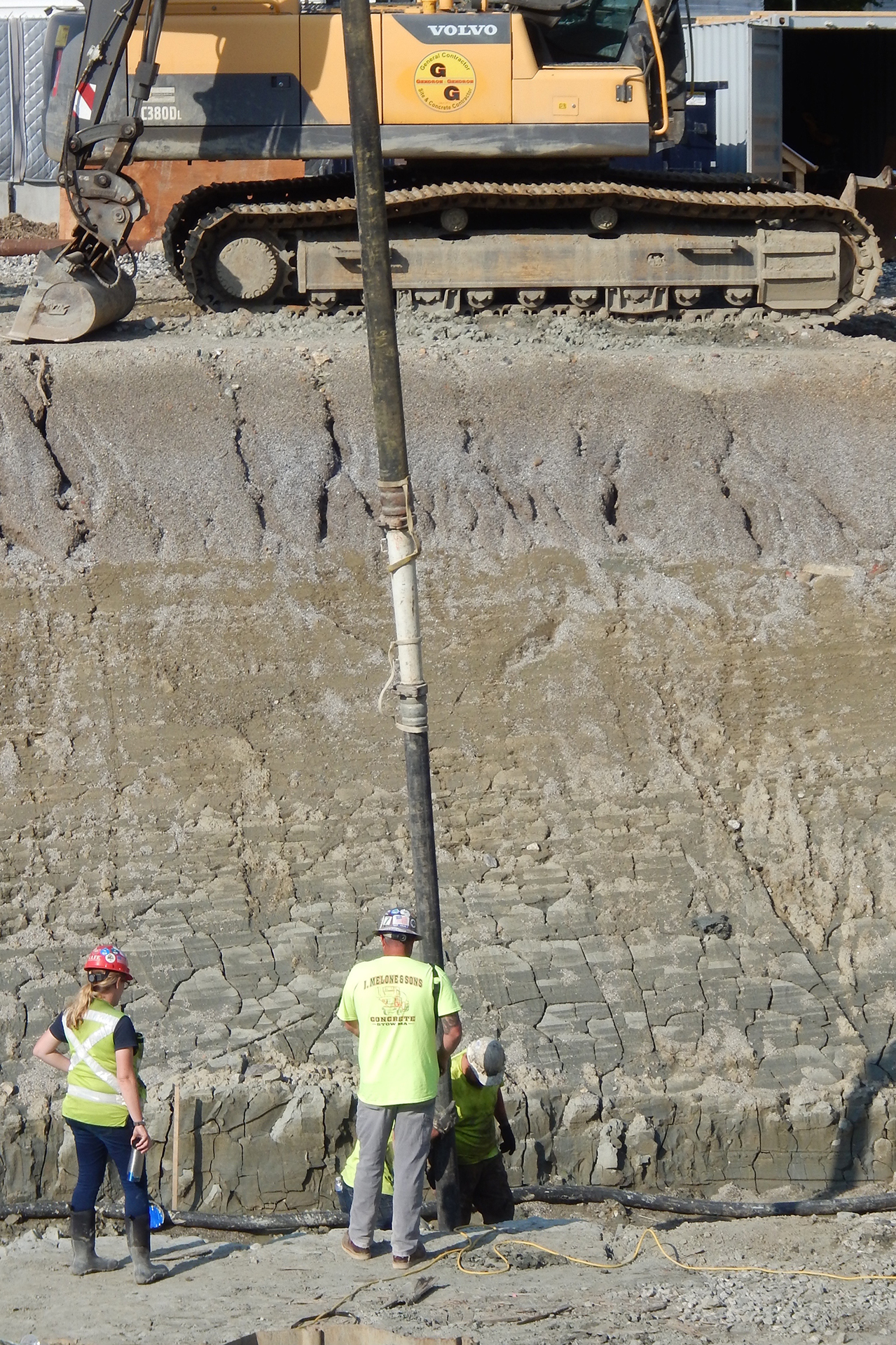 As Consigli Construction superintendent Stacey Harris (left) looks on, workers pump concrete into a pipe pile at the Bonney Science Center construction site on July 9. The concrete supply truck and pumper are out of view, above and to the right. (Doug Hubley/Bates College)

Meanwhile, the forms — think molds — for the concrete basement foundation wall started showing up this week. These are placed onto the stone-and-fabric load transfer platform — the “stone pillow” that we referred to in the previous installment — that’s being laid around the hole’s perimeter atop completed pipe piles.

Finally, another conspicuous development in the basement hole has been another hole: a rectangular area, cofferdammed by sheet piles, that is nine feet deeper than the rest of the basement. As the future site of holding tanks for storm runoff and other undesirable liquids, this feature has been expanding by leaps and bounds, as crews alternate excavation with piledriving.

Better-case scenario: Across the Historic Quad at the Gomes Chapel, a structural engineer determined in early July that most of the building’s portico is sound and will need only cosmetic restoration. The exceptions are its entrance facade and roof, both of which will be rebuilt.

This comes in contrast with the worst-case scenario anticipated by Consigli, which is overseeing the chapel’s ongoing restoration (as well as the science center project) for Bates. Contingent on the findings of a “destructive investigation,” as Bates project manager Shelby Burgau described it, Consigli had been prepared to raze the portico and rebuild it from the ground up.

So if the structure looks a little discouraged now, sans roof and quite a lot of masonry, just remember that it could have been much worse. 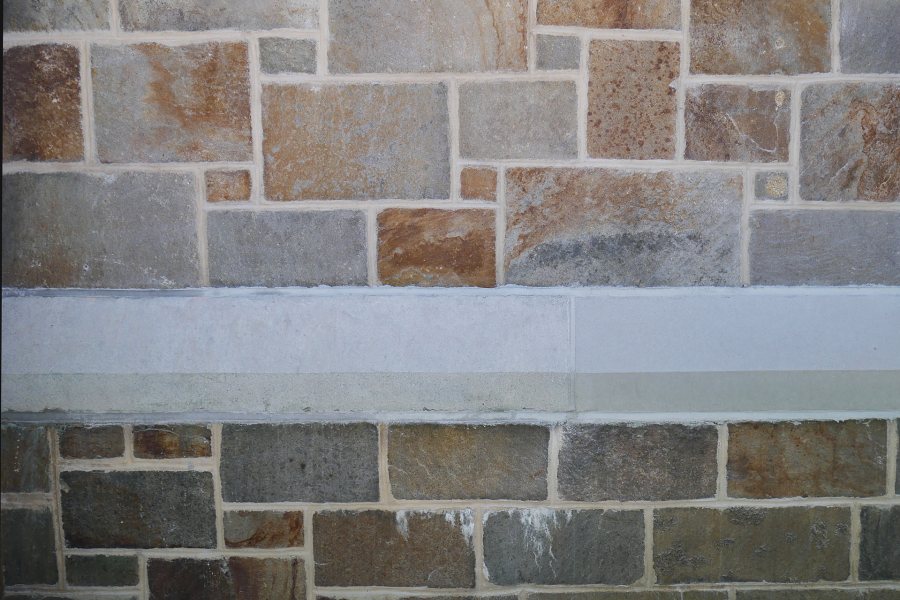 In addition to project management, Consigli has brought its long expertise in masonry to bear on the chapel. Masonry foreman Keith Lyford estimated on July 30 that his crew had completed about 20 percent of its work on the west side, facing College Street, and 40 percent on the east.

The scope of the work includes repointing masonry joints, which is pretty far along; replacing deteriorated stone, notably much of the concrete ornamentation; and replacing the decorative cast traceries that surround most of the building’s windows. 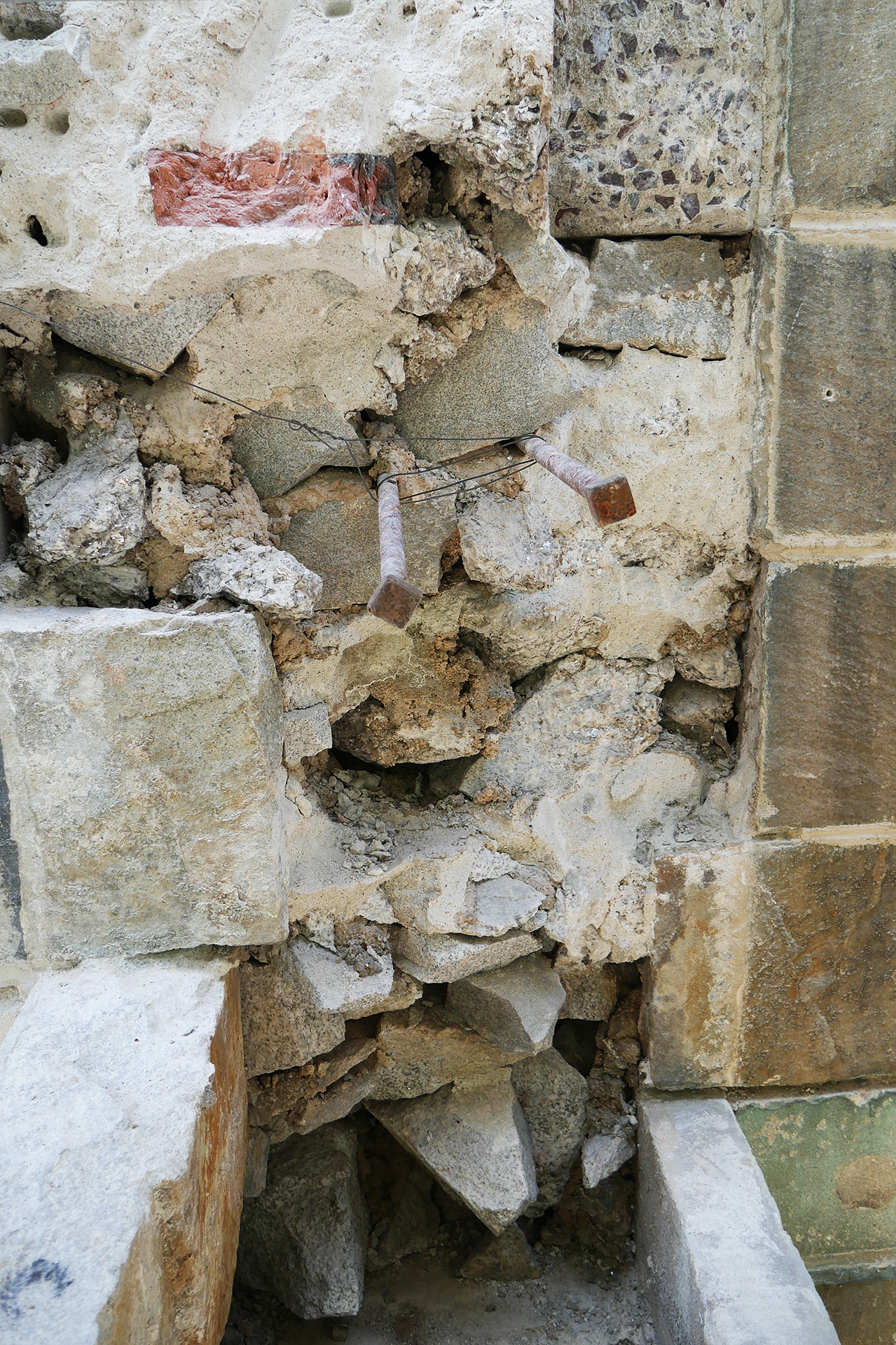 Deteriorated masonry has been removed from this buttress on Gomes Chapel. The steel rods have been epoxied in place to secure the replacement stones. (Doug Hubley/Bates College)

The first round of precast pieces that make up the traceries is on site — about one window’s worth — and another delivery was expected on July 31. The traceries have to be put in place before Phoenix Studio of Naples, Maine, can reinstall the chapel’s signature stained glass, which it has been restoring this year.

Toppings, Part I: Over at the Russell Street Track and Field, irrigation of the new soccer field turf is underway and will continue for about another month.

The roots are digging in their toes and the seams between strips of Maine Turf Co. bluegrass are closing up, reports Jay Phillips, director of operations for Facility Services. “This week we’ll fertilize, and a week after that we’ll aerate, and then we’ll just keep activity off it until six weeks are up” since the turf was laid.

A worker in a specialized forklift placed the turf rolls on the field, driving backward to unwind them into place. He was attended by other workers who guided the alignment and then attacked each new strip of grass with rakes and knives to match up seams and slice out wrinkles.

After each roll, the forklift would spit out the PVC pipe on which the grass had been rolled up, and periodically other vehicles would go around picking up the pipes and the divots left over from fitting the turf.

“Sports Fields coordinated closely with Maine Turf to make sure the sod was very fresh when it arrived” from Fryeburg, Phillips notes. “That was a key to the success of the project, especially given the kind of heat that we had” the following weekend. “It’s so critical to get that sod down before it suffers too much stress.” 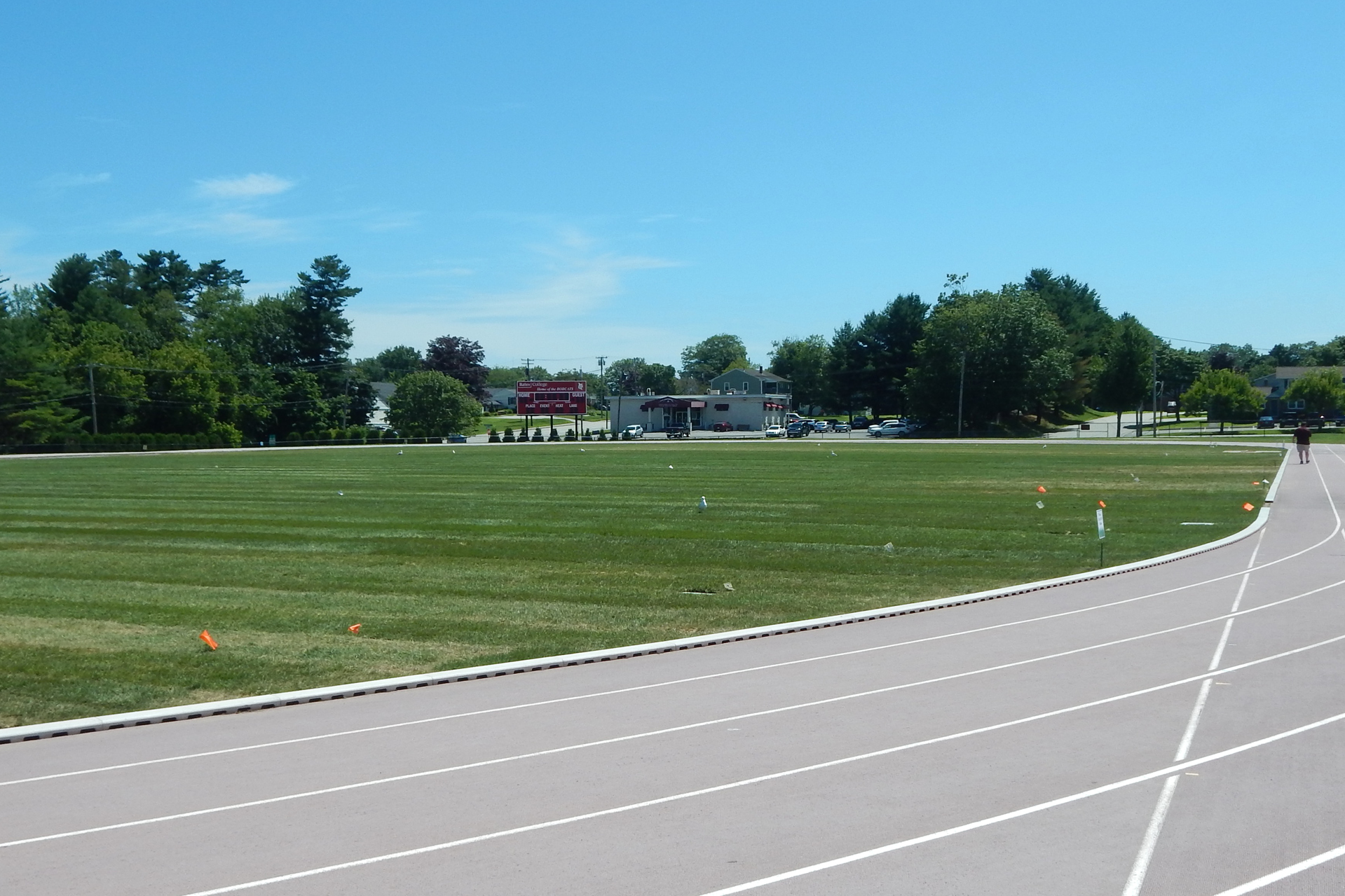 Toppings, Part II: Parking behind Lane Hall, Bates’ administration building, suddenly became a matter of vital interest to us last November when the Bates Communications Office was relocated from Nichols Street to Lane.

So we’ve been closely following the reconstruction of the Lane Hall parking lot, aka the Pit, which began the second week of July. As both the old pavement and the soil supporting it were deteriorating, the rebuilding has been a thorough job. With local excavation firm St. Laurent & Son as general contractor, the work to date has entailed excavation; placing new layers of geotextile fabric, aggregate base, and sub-base; and then laying a binder coat of asphalt.

Granite curbing is scheduled for placement this week, followed by resetting of drainage fixtures, the asphalt top coat, striping, and landscaping, including new trees on the center island. Depending on the outcome of a grant application, a dual-unit electric-car charger may also be sited there. The project should be complete by mid-August.

“It’s been a really nice project with our contractor partners,” says Phillips. He gives St. Laurent particular credit for keeping the project on track despite June weather that put participating subcontractors behind schedule.

The project will expand the lot’s capacity to 72 vehicles or so, contingent on the vicissitudes of striping. That’s a gain of about six vehicles. At long last, we’ll have a place to store our 1973 Volkswagen Karmann Ghia.

Can we talk? Campus Construction Update welcomes your questions and comments about current, past, future, and imaginary campus improvements. Please e-mail news writer Doug Hubley, stating “Construction Update” or “Did you ever try to change the spark plugs on a Karmann Ghia?” in the subject line. 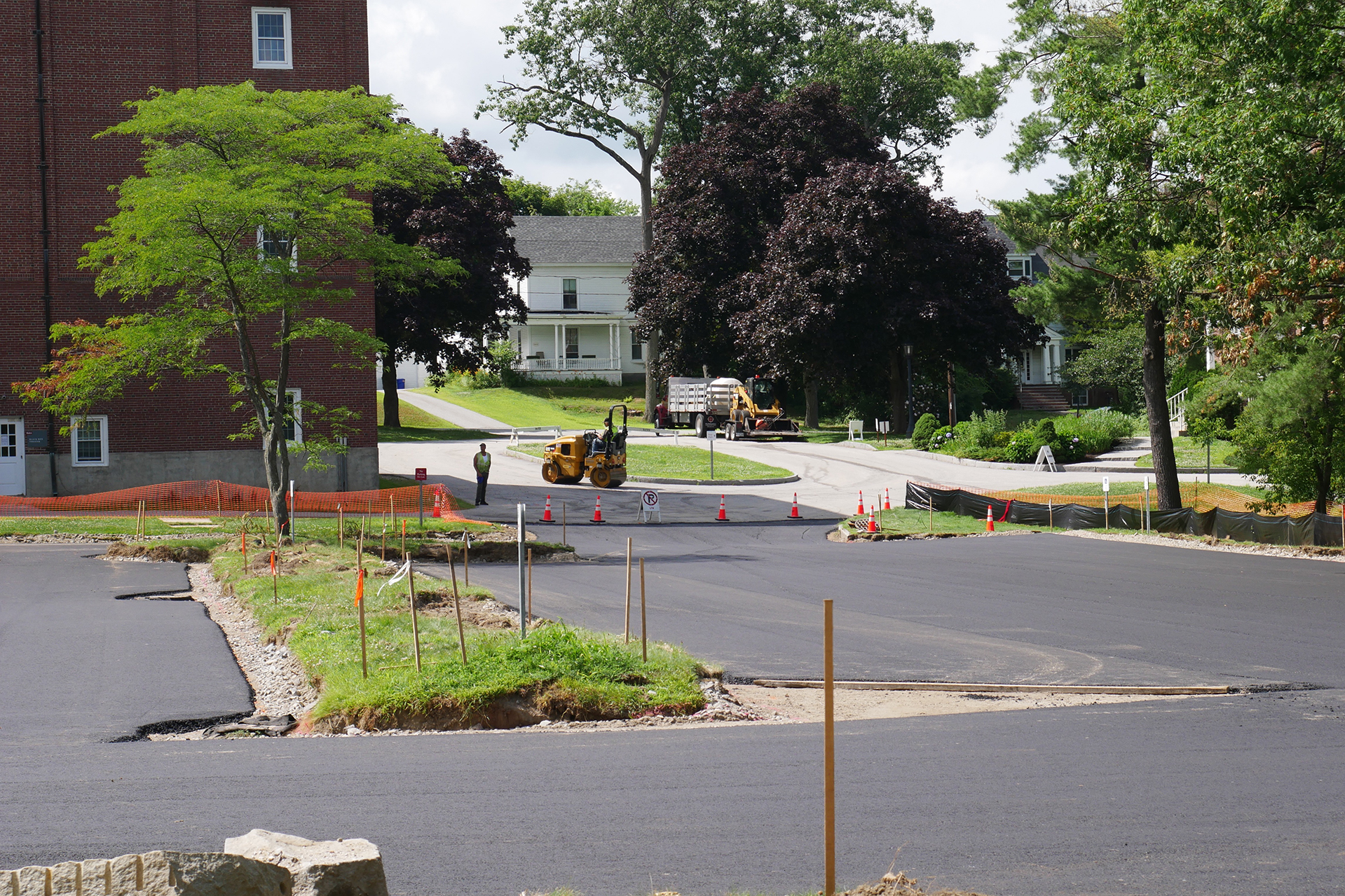