In a way, a lobster roll from the Clam Shack, an iconic summer eatery in Kennebunk owned by Steve Kingston ’88, is just lobster meat tucked inside a bulkie roll.

But that’s like saying an L.L.Bean boot is just leather stitched to rubber. Both deliver more than just the sum of their parts — a slice of authentic Maine itself.

In the case of a Clam Shack lobster roll, it’s not a slice of Maine but big, delicious bites, chunks of Maine lobster drizzled with Maine-churned butter and served on a special-order bun baked a few miles away. (Plus mayonnaise? Your choice.) 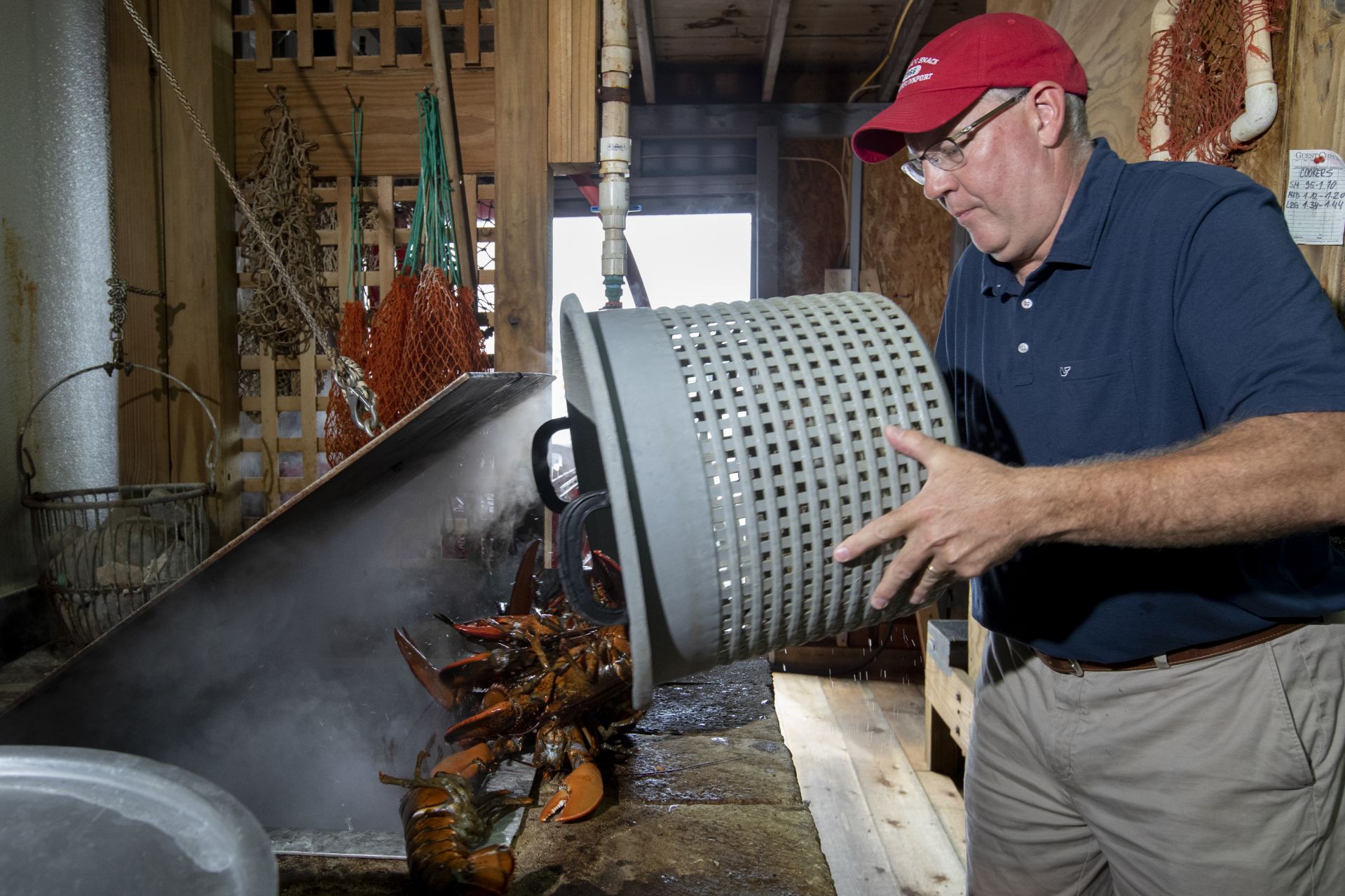 Next door to the Clam Shack is the operation’s lobster pound and prep area, where Steve Kingston tips a basket of freshly caught lobster into a boiling kettle. (Phyllis Graber Jensen/Bates College)

On a humid mid-July morning, the area around Kennebunkport’s Dock Square area feels like the epicenter of the Maine tourist season.

At the Clam Shack, Kingston’s staff, smartly branded in red caps and blue shirts, prepare to open, moving tables around and putting into position a lemonade stand, the very one Kingston once used to sell lemonade in town as a Bates sophomore.

Helping repair one of the outdoor wooden picnic tables, Kingston has a to-do list in hand and his eyes flash about, checking his stage before the curtain goes up.

Gawking and strolling, tourists wander around Taint Town with a delightful lack of purpose — except the ones who’ve begun to line up outside the Clam Shack even before its 11 a.m. opening. They want their lobster roll. Or fried clams. Or boiled lobster dinner.

They’re on a quest, says Kingston. 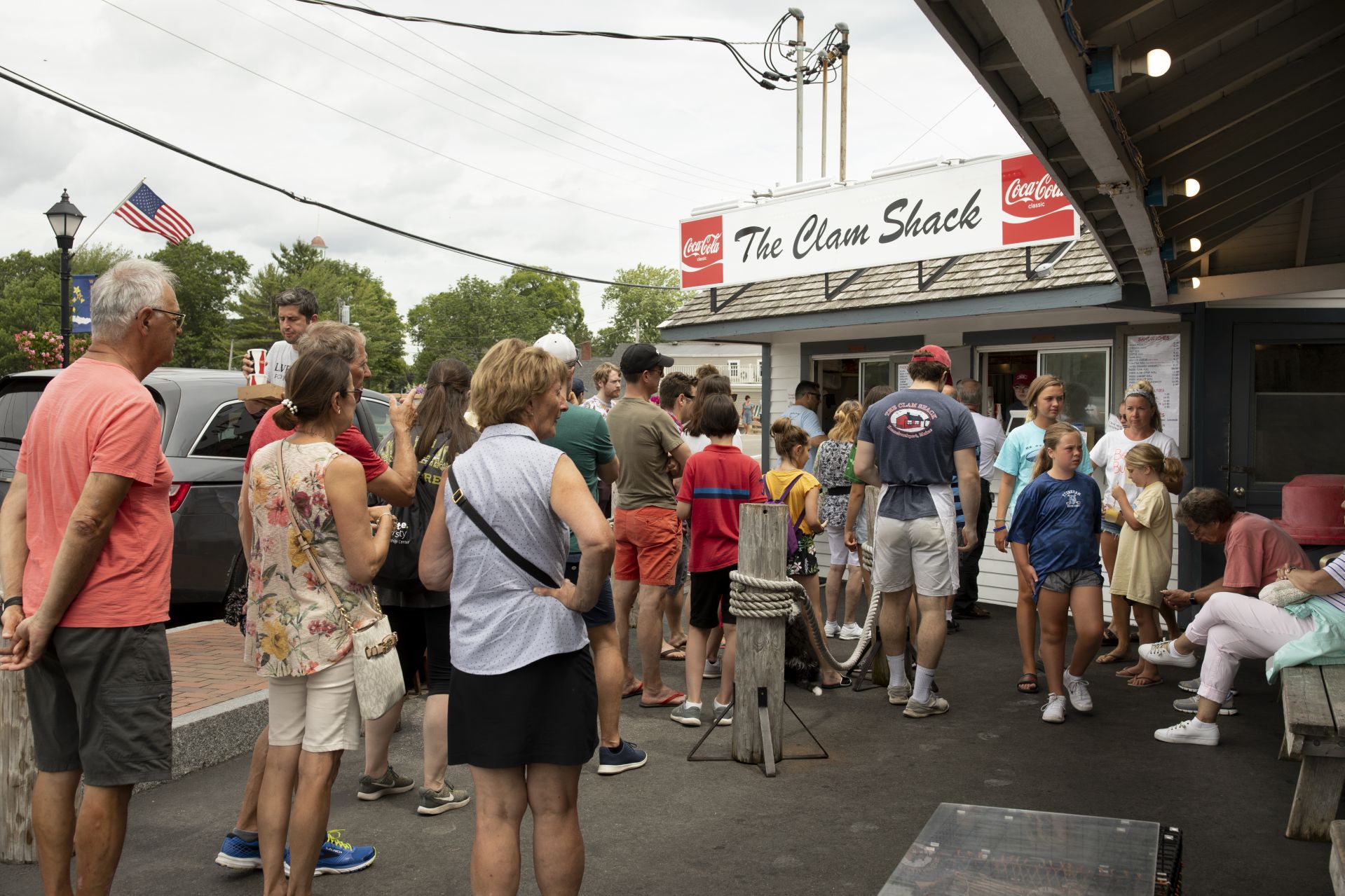 A daily sight in Kennebunk on any summer day: a line of tourists waiting to place their order at the Clam Shack. (Phyllis Graber Jensen/Bates College)

Kingston has owned the Clam Shack since 2000, a 19-year stretch that nicely coincides with the rise of both social and food media, and the Clam Shack has become a darling of both, giving the business a worldwide reputation. 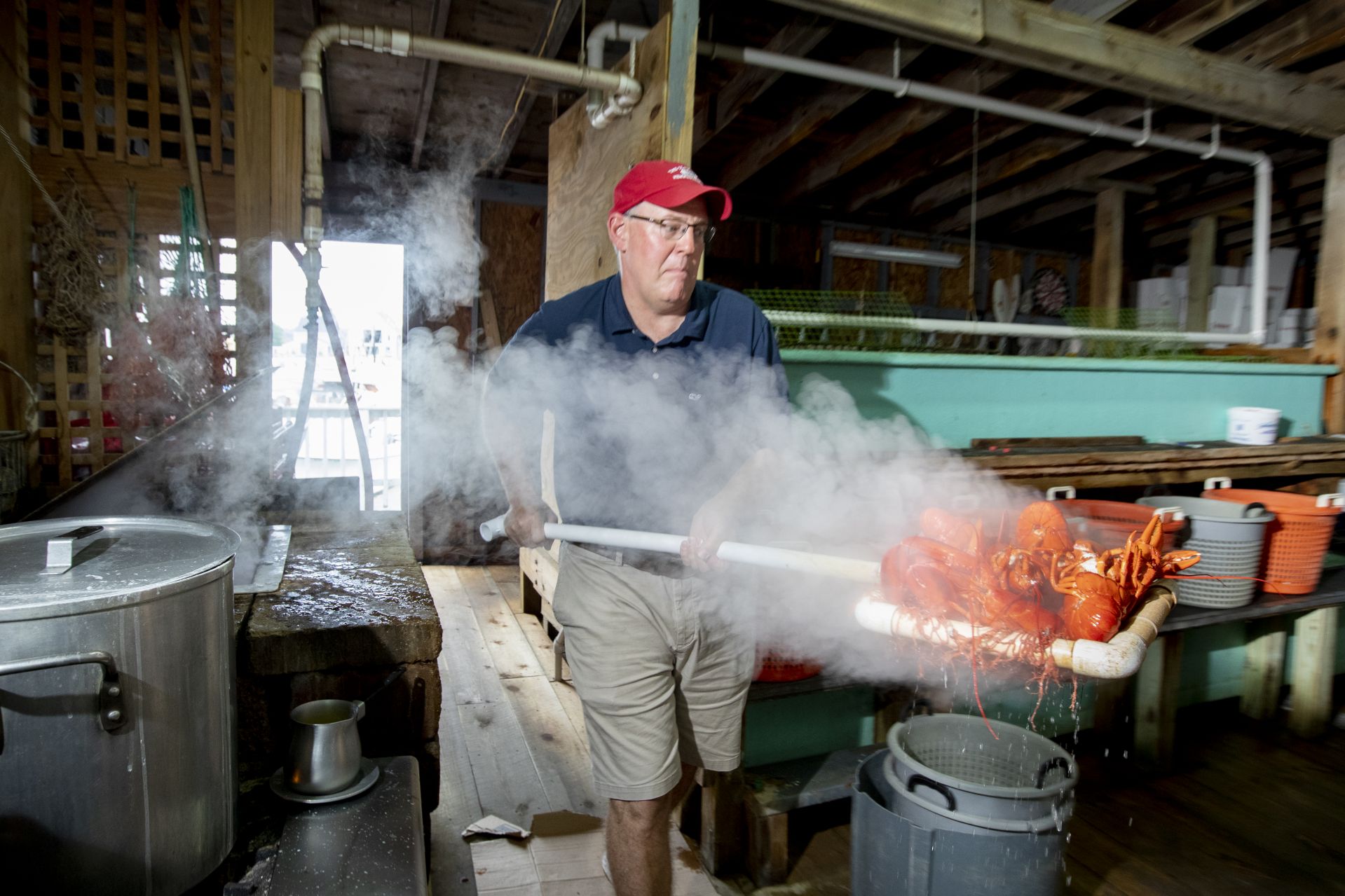 Steve Kingston scoops freshly cooked lobsters from a kettle that dates to the 1930s. On a busy summer day, the Clam Shack will process 1,000 pounds of lobsters. (Phyllis Graber Jensen/Bates College)

Indeed, Kingston is a media pro, both affable and on-message during an interview. “I love talking with people who love the food,” he says. In that way, “I feel we’re in the entertainment business.”

Gary and Lois Griswold of Wyoming, Ohio, are regulars on the Clam Shack quest. Shortly after 11 a.m., they’re seated outside waiting for their order, taken by Kingston’s 19-year-old daughter, Piper. Gary knows his lobster rolls. “Last year when we came to Maine, I had a lobster roll every day.”

Gary is asked to describe a Clam Shack lobster roll in one word. “Best,” he says. Then two: “Best anywhere.” And what makes it the best? “Just look at the line.”

On its busiest days, the Clam Shack will process 1,000 pounds of live lobsters, which will yield enough cooked meat for around 400 rolls. The sandwich’s quality begins and ends with the meat, says Kingston. “We produce great lobster meat.” 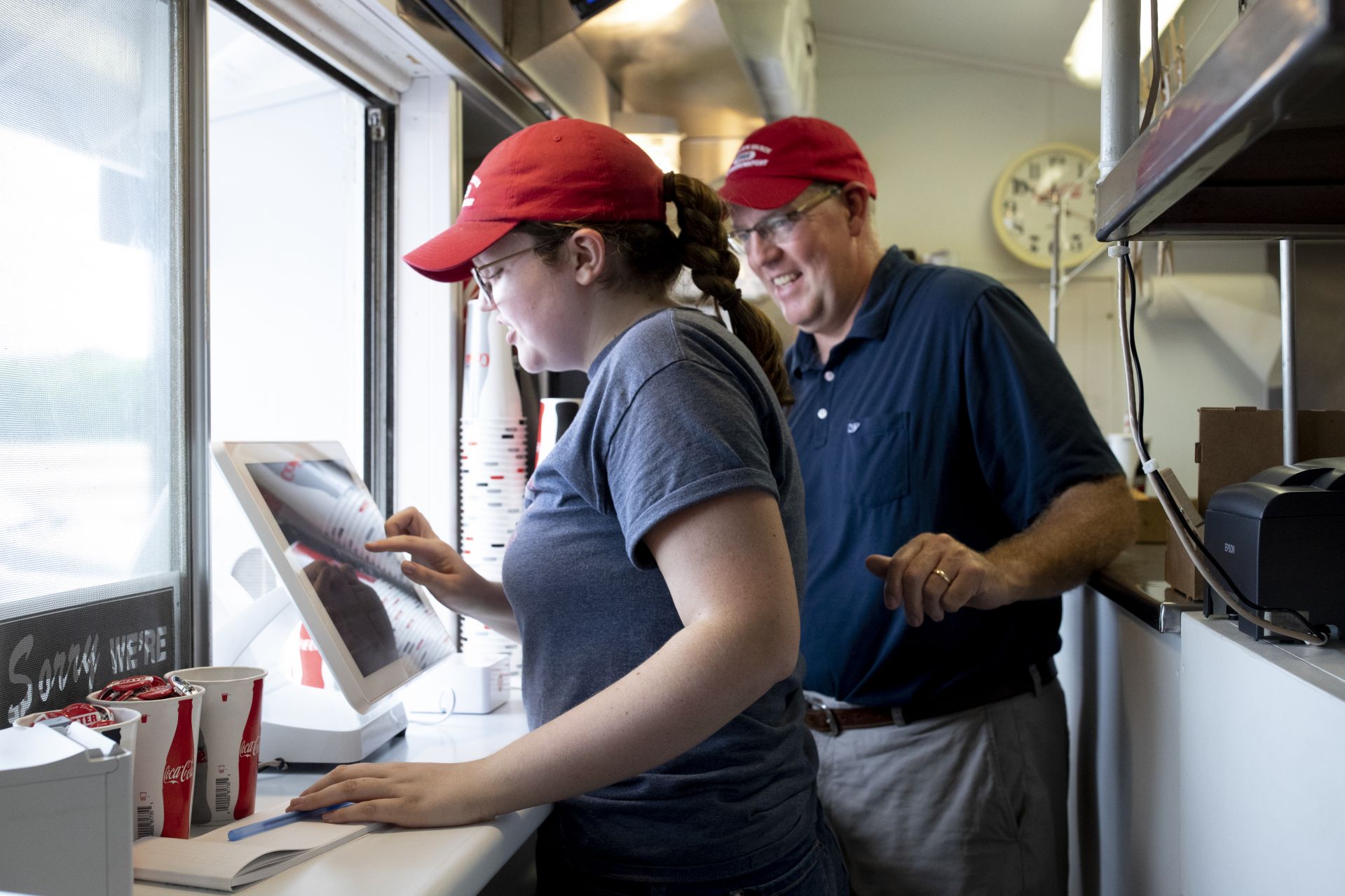 Steve Kingston ’88 checks in at the Clam Shack as his daughter Piper, 19, takes orders on a July morning. (Phyllis Graber Jensen/Bates College)

As he gives a tour, Kingston puts an authentic Maine stamp on his operation. Out back in the prep area, he scoops a batch of cooked lobsters from the kettle. It’s not just any pot: It’s a pot that hasn’t left the building since the 1930s. “And it’s never seen chemicals.” He sets down the red lobsters. “Summertime in Maine!”

Until they’re cooked, the lobsters live in a tank fed with fresh salt river water. They’re cooked in salt water in the historic flame-heated pot. “Very few places are doing this,” he says. Don’t get him started on eateries that use frozen lobster meat. “That should be against the law in Maine,” he jokes.

All this prep takes place behind the scenes at Kingston’s next-door venue, Seafood Market. Out front, the market offers sit-down seating, beers on tap, and swag for sale. Buoys of lobstermen who’ve fished for the Clam Shack hang from the ceiling, and the legs of certain stools are painted to match the buoys.

Nothing wrong with dealers, he says, “but a lobster from a dealer could come from anywhere on the Maine coast.”

At the back of the market is the lobster pound and prep area, where cooked lobsters are hand-shucked by members of Kingston’s team, mostly local high school and college kids, plus international students from countries like Kosovo and Ukraine who spend the summer in Kennebunk on J-1 visas. When the students go back to school, Kingston’s crew is replenished with local retirees who’ve been part of his operation for years.

Kingston does not buy his lobsters from dealers. Nothing wrong with them, per se, he says, “but a lobster from a dealer could come from anywhere on the Maine coast.” 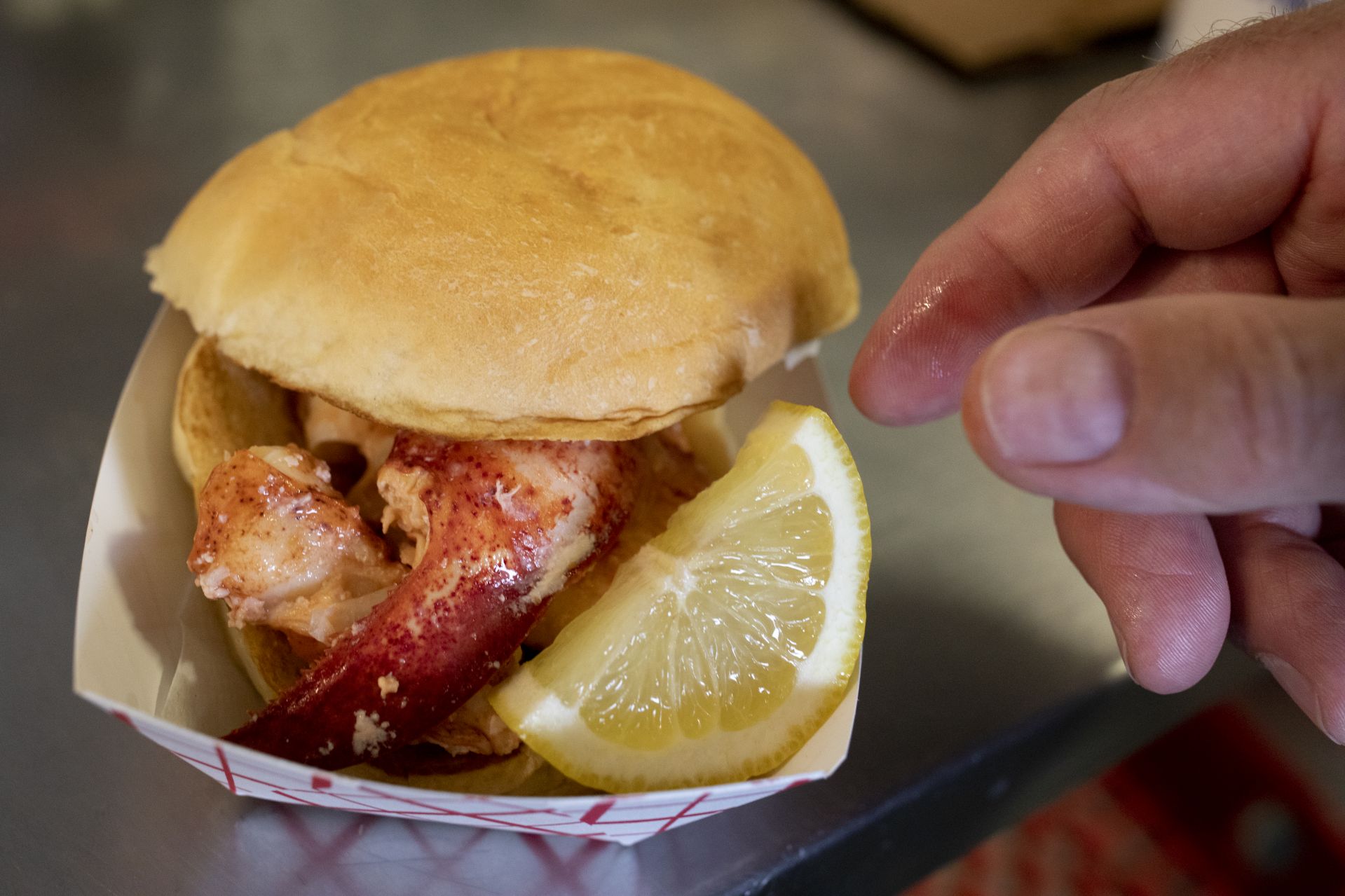 The finished product — a lobster roll from the Clam Shack — is much more than lobster meat tucked between halves of a bulkie roll. (Phyllis Graber Jensen/Bates College)

Instead, three local lobster boats serve the business full time. Each day, they pull up at the Kennebunk River bridge and hand-deliver big totes of lobsters to Kingston. “Our lobsters are literally coming from right here,” he says, gesturing downriver toward Cape Porpoise Harbor.

Beside the lobsters, the rest of a Clam Shack lobster roll is local, too, the roll specially made at Reilly’s Bakery in Biddeford (25 minutes away) and butter churned at Kate’s, a creamery in Arundel (20 minutes away).

The Clam Shack is open May to October, Mother’s Day to Columbus Day. And if Kingston’s brand promise is a Maine summer experience, he’s single-minded in how he delivers it. “I’m a pretty linear thinker,” he says. “I know what I want.” In the case of the Clam Shack, “I want to serve summer all the way through the end of the shoulder season” in early October.

To that end, “I hoard kegs of Shipyard Summer Ale,” he admits, noting that craft breweries often run low on their summer selections by September. “They’ll try to get you into their fall flavors.” Not at the Clam Shack. Not under Kingston’s watch.

“If it’s a beautiful weekend in September, it’s summer. It’s summer here, and we need to have a summer beer.”

Kingston is laser-focused on lobster, but he’s not a noodge about it. “Yeah, I love lobster,” he says. “But I also do a lot of entertaining in the summer” which means a lot of lobster on his plate. “Halfway through the summer, I’m like, ‘Will someone just go get me a steak?’”

Kingston’s Kennebunk connection began when he was a kid. He grew up in a couple different New England towns — the family moved for his dad’s work with IBM — but one constant was summers in nearby Goose Rocks Beach. That’s when he got the bug, he says, “to sell food to tourists. And it’s never left my blood.”

His first food-to-tourist gig was during his Bates summers, selling lemonade from a pushcart in the parking lot of the Kings Port Inn, just up the hill from the Clam Shack. His was no crappy powder-in-a-pitcher production. Fresh lemons, muddled in a glass with ice, sugar, and water, then shaken (with a grand flourish, visitors remember) by Kingston.

One day during the summer before his junior year, an old-timer who ran a hole-in-the-wall ice cream shop in Dock Square, Aunt Marie’s, asked Kingston to pay him a visit. “He wanted to sell,” Kingston recalls. “And I’m like, ‘Oh my gosh, I get a chance to move to Dock Square!?’”

He took out a loan — $13,000 — to buy Aunt Marie’s. With that, Kingston became an integral part of the Kennebunk scene.

“The Clam Shack is still a local place. And I’m the guardian.”

Besides the Clam Shack and the ice cream shop, which he still owns, Kingston’s other local food-to-tourist businesses are the Sugar Shack candy store and Satellite Doughnuts, which is run by his oldest daughter, 23-year-old Colby. (Kingston and his wife, Jeni, have three daughters, including Shae, age 21. All three, Colby, Shae, and Piper, have worked at the Clam Shack).

From family to food, Kingston is a local Maine operation, and that makes him both proud and protective. “When local places are bought out [by developers], they can lose their Maine soul.”

“The Clam Shack is still a local place,” he says, noting that the building dates to the 1930s, and the prior owner, from Biddeford, had run it since 1968. “And I’m the guardian.”