Getting here from there: Equipment needs at the Bonney Science Center construction site are necessitating street closures this week and next. From Sept. 16 through the 20th, Nichols Street is closed where it meets Campus Avenue. The sidewalk remains open and street parking for residents is accessible from Vale Street. The equivalent stretch of Bardwell will be closed the week of the 23rd, again with street parking accessible from Vale.

Pipes down, it’s foundation time: The weeks of plangent clanging and sooty diesel puffs at the Bonney Science Center site ended on Aug. 12 with the driving of pipe pile No. 260, the last pile that was driven to stabilize the clay layer underlying the site.

The end of piledriving freed up the remaining perimeter for construction of the building’s foundation, which had begun in late July. It also meant farewell to the two piledriving cranes that had towered over the site most of the summer. 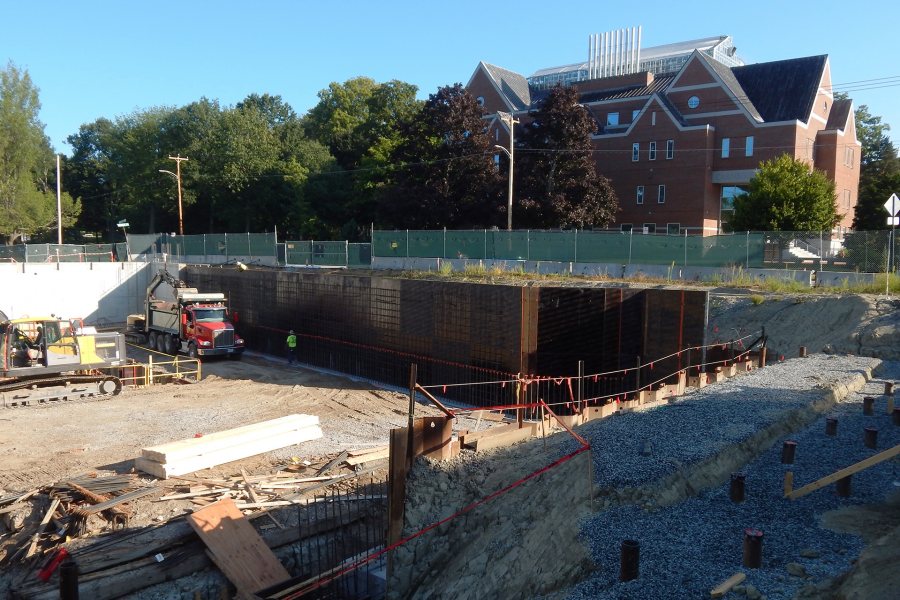 Performed by Consigli Construction, the firm managing the Bonney project for Bates, the foundation work has gone stunningly fast. As we’ve described before, the pipe piles were filled with concrete, and capped with steel plates. They were then topped with a load-transfer platform made of crushed stone wrapped in fabric.

Then foundation footings were placed: Forms were fabricated from wood and flat panels, and rebar was inset (by specialists known as rod-busters). And then the forms were filled with concrete.

That process is cool to watch, but doesn’t hold a candle, or a diesel puff, to the making of the foundation walls. Again, it’s a matter of assembling forms and rebar and applying concrete, but the scale makes a difference. This is striking simply because the foundation hole is deep, so the walls are high (reminding one of a certain Ike and Tina Turner hit from the 1960s). 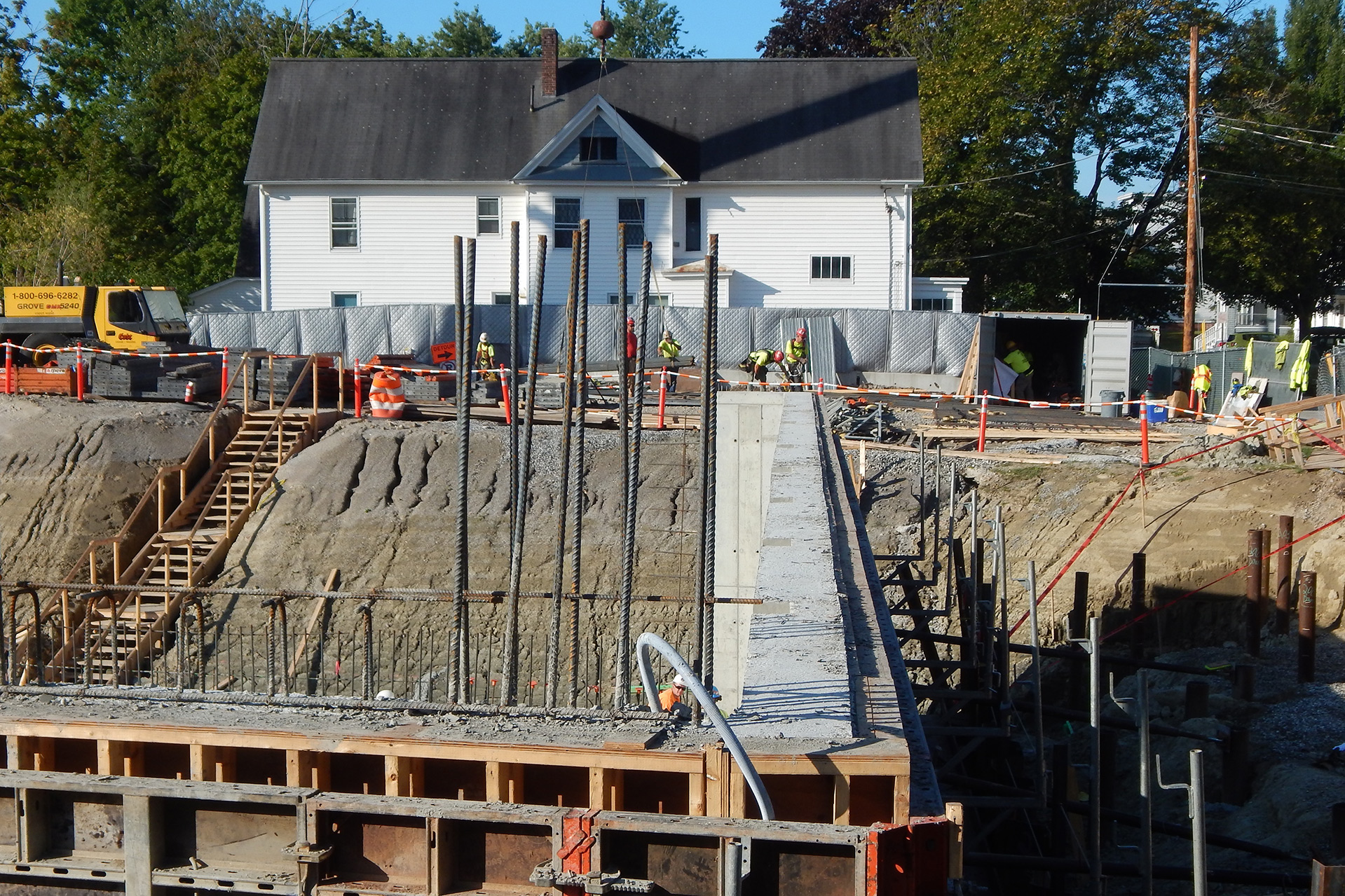 Sighting along the top of the Bonney Science foundation wall on the Nichols Street side. (Doug Hubley/Bates College)

Where until now we’ve been watching humans and machines toiling in the muck of marine clay, there are suddenly smooth concrete walls standing tall, or at least up to ground level, and looking something like a building.

As a side note, we were interested to learn that there is no fastening, so to speak, between the load-transfer platforms and footers, nor between the footers and the foundation walls. Tremendous weight alone keeps those foundation parts together. (So it’s a relief to know that the physics department’s anti-gravity experiments will remain in Carnegie Science after Bonney opens for business, in autumn 2021.)

Foundation progress would have been quick in any case, but delays caused by piledriving complications, as previously explained, have added urgency. “They’re working longer hours and working Saturdays in ways that they might not have without the extended time on the pile driving,” says Chris Streifel, Bonney project manager for Bates. 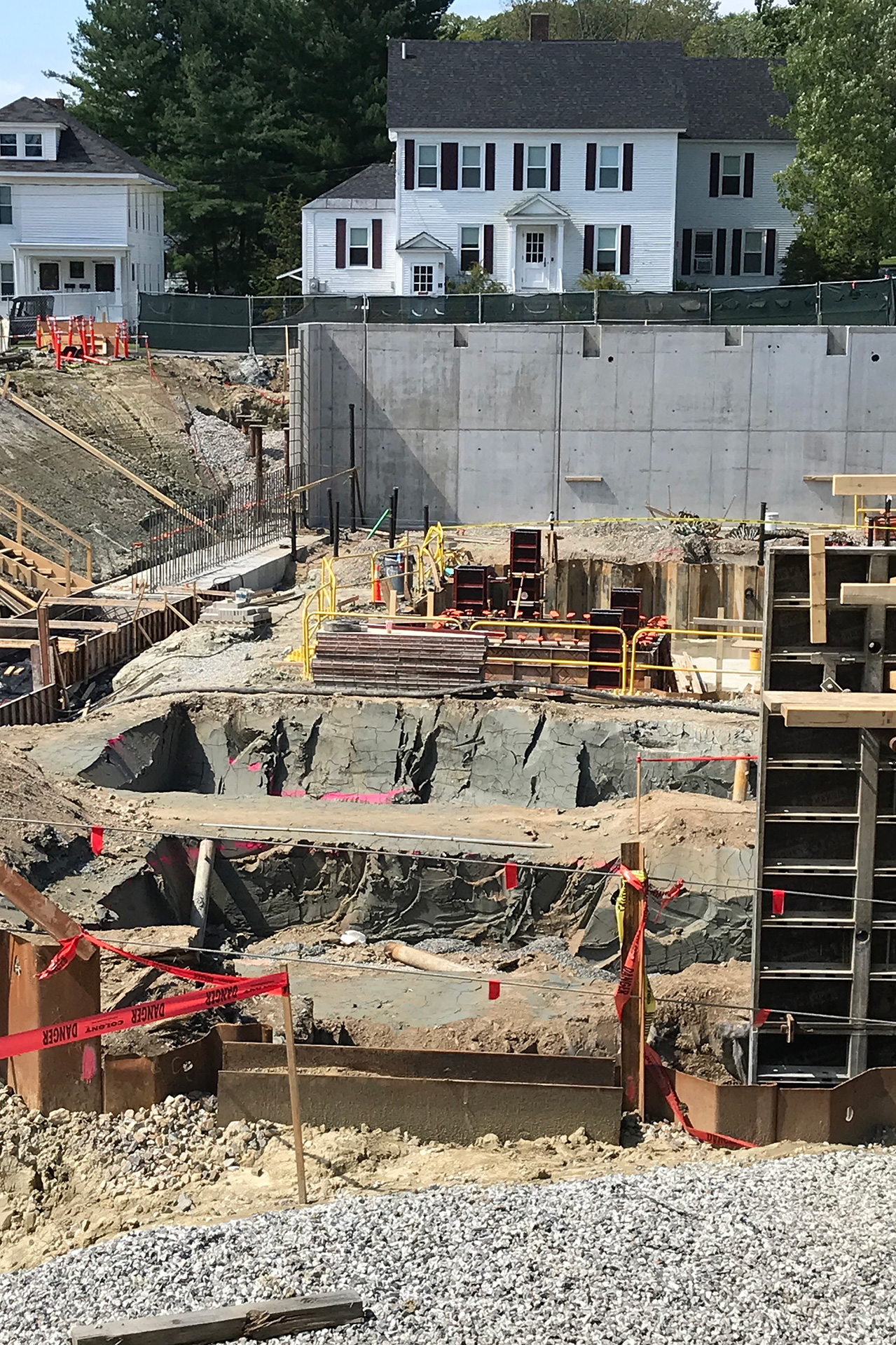 Shown, from rear, are a foundation wall at Nichols Street; the “cofferdam”; at left, a foundation footing; two pits that will hold additional footings; at right, a section of a wall form. (Doug Hubley/Bates College)

By this week, the foundation wall at the Nichols Street end of the site was poured, the forms and rebar were in place for the long wall along Campus Avenue and a bit of the Bardwell Street side, and footings were in place or in progress a short ways beyond the wall.

The biggest gap in the foundation thus far is along the south side. At the moment, that’s the location of a wooden stairway for bipedal access to the foundation floor and an earthen ramp for heavy equipment. That ramp’s days are numbered, but Consigli is pondering the timing of its removal. Once it’s gone, the ability to drive a big excavator, say, down into the hole will go with it. But Streifel notes that even post-ramp, a relatively small machine like a Bobcat (the non-mammalian kind) could be lowered into the pit by crane.

As the footings and then the walls have wrapped around the foundation hole, other concrete creations have been appearing in the middle of it: notably, in the big pit-within-the-pit that the construction team calls the “cofferdam.”

(A cofferdam is usually a work space created within a body of water — for instance, to repair a seawall — by making a sheet-piling enclosure and pumping it out. The Bonney cofferdam, which is the biggest of several pits-within-the-pit, gets its nickname from the sheet piling temporarily holding up the clay walls.)

This space will ultimately contain the base of the Bonney elevator shaft and tanks for holding varieties of waste water awaiting discharge into the city pipes. On Sept. 4, we were lucky to be loitering next to the construction fence when the first of the three tanks, a large precast concrete model, was lowered into place.

This was accomplished by a yellow telescoping-boom crane, from Cote Crane Service of Auburn, and by workers on the ground who used ropes — and, at least once, a steady one-handed push — to manuever the big box into place. 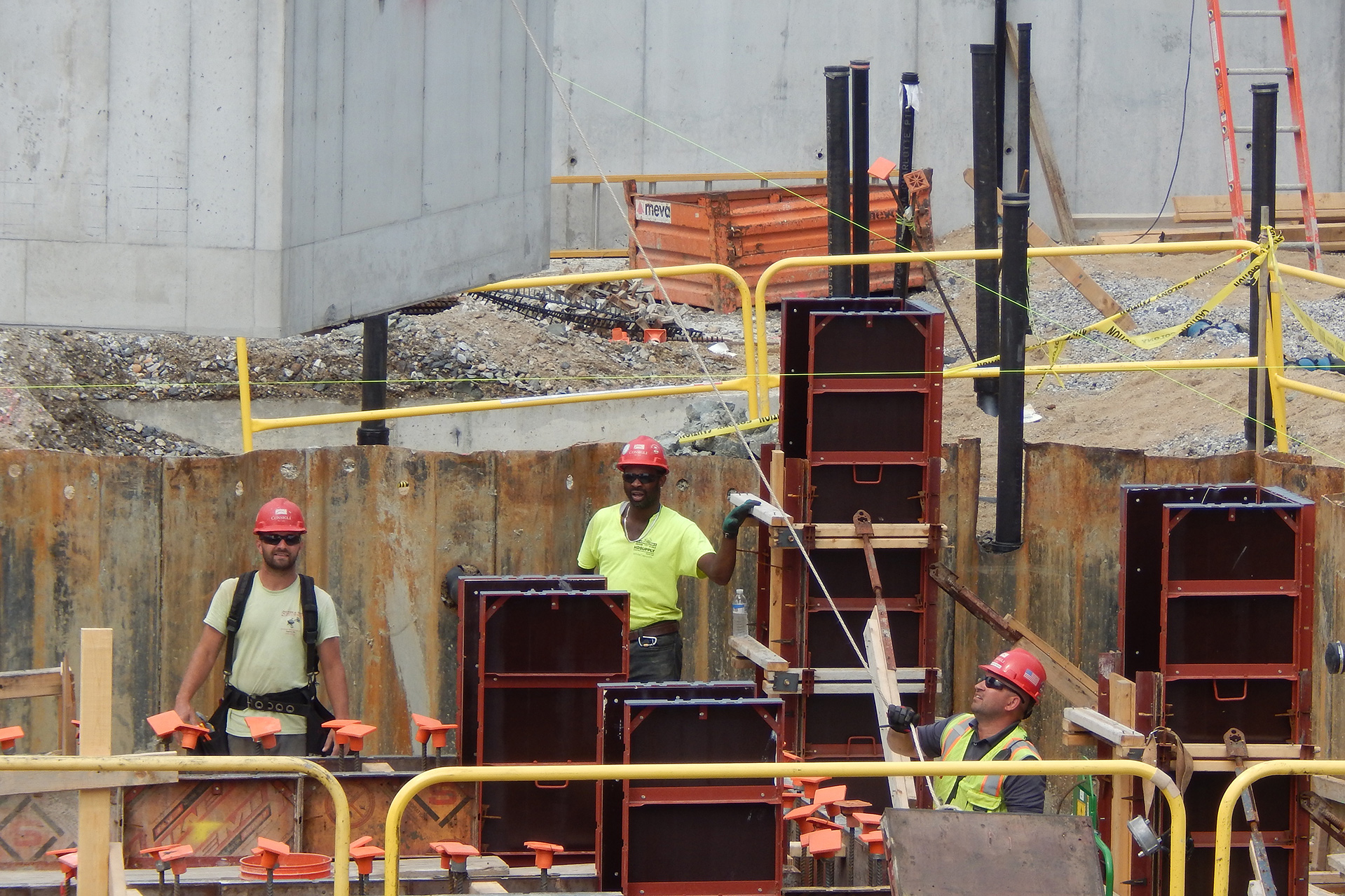 At upper left, a precast concrete holding tank is being lowered into the Bonney Science Center foundation while the worker at lower right pulls on a rope to guide it. The tank will store waste liquids. The red-and-black objects are forms for concrete columns. (Doug Hubley/Bates College)

Also happening in the cofferdam and the smaller pits is the creation of several load-bearing piers, evidenced now by their concrete forms.

What else are we watching at the Bonney site? Components of the basement floor could appear this month — a vapor barrier, and a sheet grid to reinforce the concrete floor slab.

Possibly starting this week, all the concrete walls that will contact soil need to be waterproofed. That’s the precursor to dumping in dirt to backfill the gap between the foundation walls and the massive sheet-pile retaining wall that lines three sides of the foundation hole.

But, as Streifel explains, that gap will be filled only so high for now. That’s because of both the pressure that soil will apply to the foundation walls and the interactive nature of the building’s structure. The walls “will rely on the pushback from the first-floor slab to hold them from caving in,” he says. 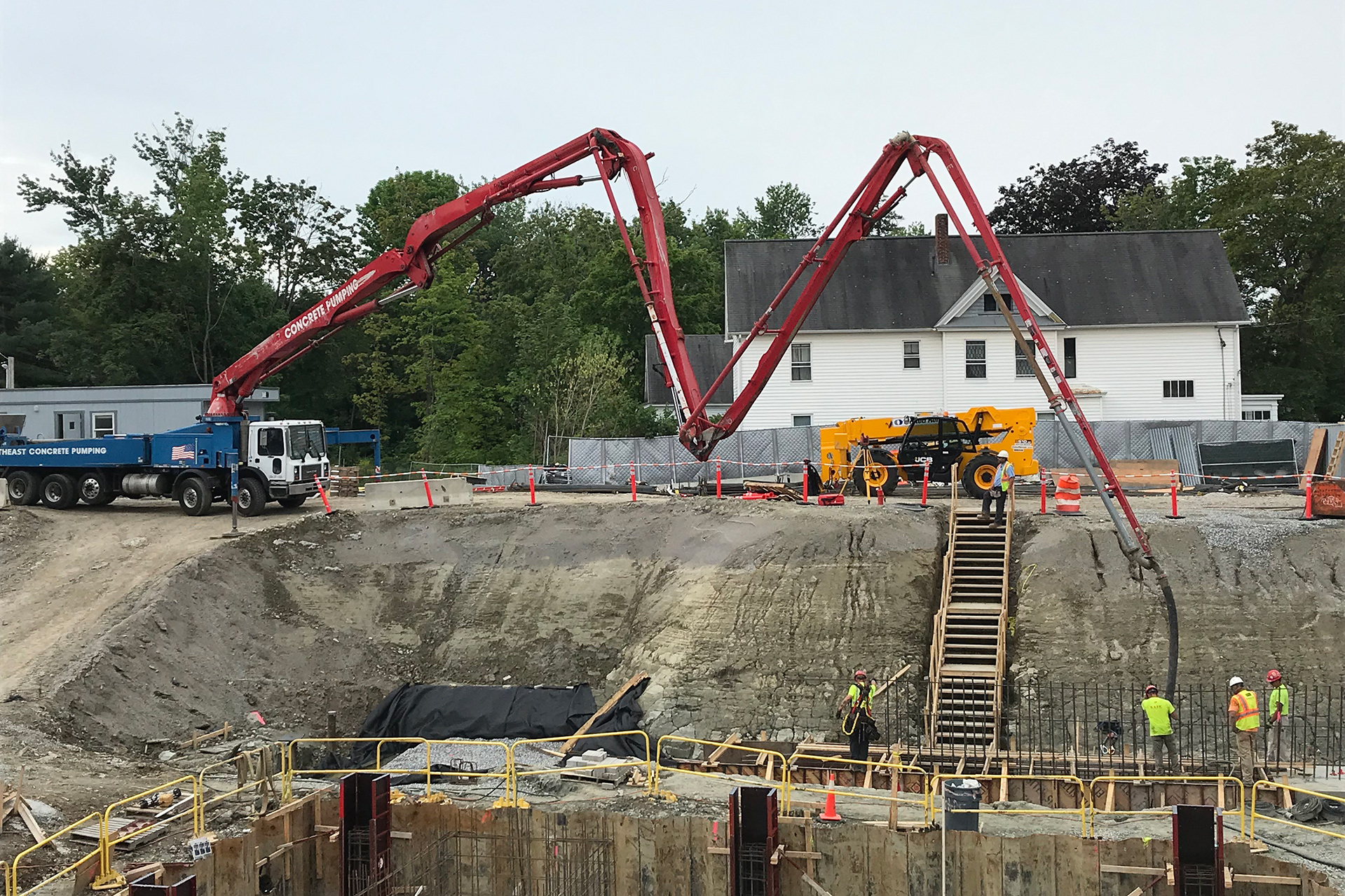 Dial M for concrete: Pumping concrete into a foundation footing on the south side of the Bonney Science Center on Aug. 21, 2019. (Doug Hubley/Bates College)

But the slab isn’t there yet. “So they’re looking at backfilling about a third of the way up over the next several weeks. And then they’ll have to wait until after the first-floor slab is in place to backfill the rest of the way. That’ll be probably late October.”

Now, what was the other thing we wanted to mention? Cheese? No, wrong update. It was steel! — we could, Streifel says, see structural steel start to fly at Bonney by late September or early October.

Strike out the bands: As restoration work continues at the Peter J. Gomes Chapel, the construction fence surrounding the building will stay up through winter, reports Bates Project Manager Shelby Burgau.

The construction zone footprint may shrink a bit, Burgau notes, but Gomes will remain off-limits into 2020. 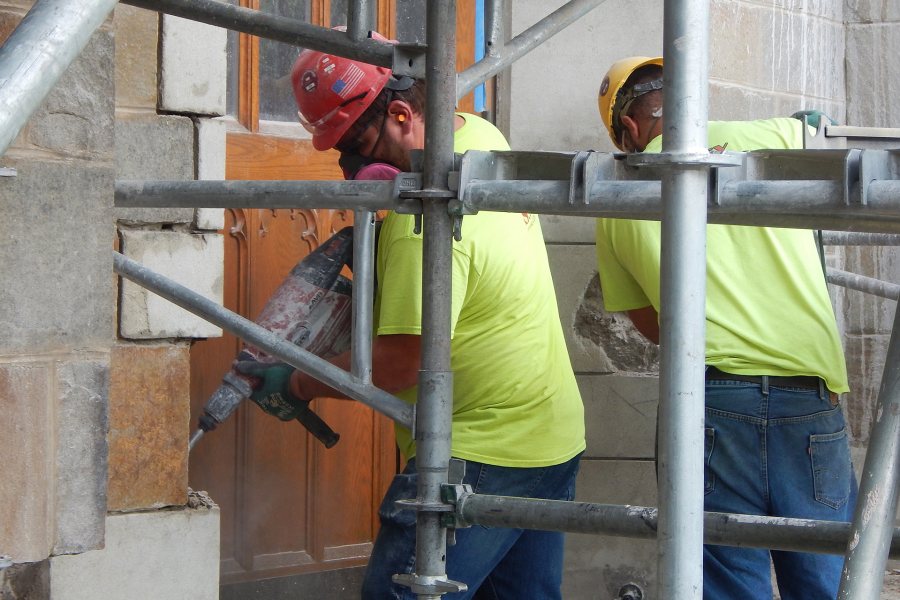 Masons for Consigli Construction, which is wrangling the Gomes project as well as the science center job, have largely finished restoration of the exterior masonry facing the Historic Quad. All the granite wall surface has been repointed, and most of the precast stones replaced.

The focus now is on the west or College Street side, where the granite repointing is nearly done and sections of precast band courses that need replacement are being chiseled out. Also being replaced are the steps at all the side entrances, including the footers that support them.

Burgau points out that moisture damage is concentrated on the buttresses, which are especially susceptible because they have three surfaces exposed to the elements and less exposure to warmth, which would drive out moisture, escaping from the inside. The precast buttress capstones have taken a particular beating in the 105 years of the building’s existence. 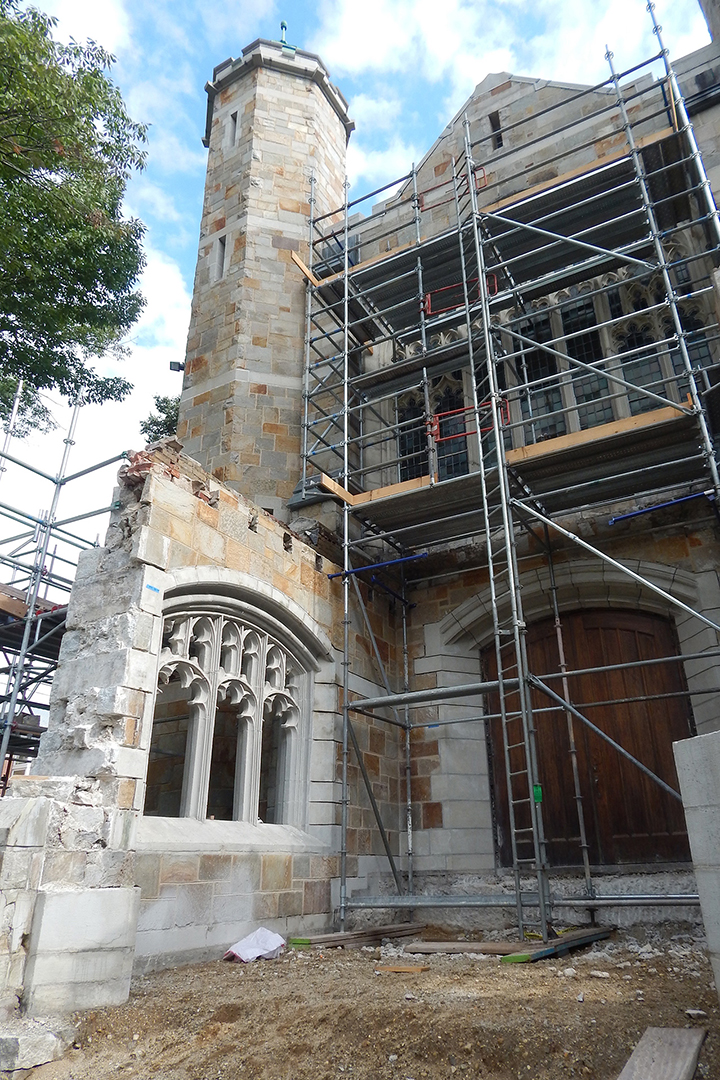 New traceries, replicas of the originals, are now in place in the two arched windows on the Quad side. Still to be done are the two arched units on the College Street side, and rectangular windows on both sides.

And what about the Gomes portico, which is missing roof, floor, and the leading edges of its stone walls? The stones will be reset by spring. But the roof and floor will have to wait till next summer and may be the last work done during the restoration. With the stained glass window above the portico scheduled for removal and restoration next year, it only makes sense to keep that space open until the window is back in place.

Batting cleanup: Also overseen by Burgau, the expansion of the sports medicine center in Merrill Gym was finished on time, and the center — now including a dedicated therapeutic exercise space so that athletes don’t have to do their reps in the hallway — is in use.

“We are excited about the upgrades to the sports medicine spaces, and how as clinicians we have more space and tools to incorporate more-modern techniques in the recovery of student-athletes,” says Nick Cooke, assistant director of athletics for athletic performance.

“The student-athletes are excited as well. Typically a student-athlete comes to sports medicine when they aren’t at their best, and we’re seeing a renewed energy when they come in, that this is truly a place that has the space, equipment, and staff for them to succeed in their recovery.”

Finally, dear to the hearts of the Bates administrators who inhabit Lane Hall, the makeover of the Lane parking lot was complete and the lot open on Aug. 13. The project, managed by Facility Services operations chief Jay Phillips, not only resulted in a much-improved parking surface, but more of it: Parking capacity increased by six spaces.

And for the first time, the Lane lot has a charger for electric vehicles, the fourth such installation at Bates.