“In Maine in the summer, why wouldn’t you want to hear chamber music?” wonders Miriam Smith ’85, a violinist, educational consultant, and founding board member of Salt Bay Chamberfest, in Damariscotta.

As rhetorical questions go, that one’s all but bulletproof. Does live chamber music feed your soul during the cold gray months of the formal concert season? If so, then imagine how sated your soul will feel soaking in that music on a soft summer evening amidst green trees and water views.

From Kennebunk to Katahdin, from lobsters to lakes, we offer My Maine Summer — profiles of alumni whose work, play, and family life have a distinctive Maine-in-summer vibe.

This logic has produced a constellation of Maine summer music festivals and camps dating back at least to 1902, when violinist Franz Kneisel founded a chamber music school, Kneisel Hall, that’s still going strong in Blue Hill. Mostly a coastal phenomenon, these institutions have also turned up inland — such as the bygone Saco River Festival, in Cornish, founded by the late, legendary Bates pianist Frank Glazer and his wife, Ruth. 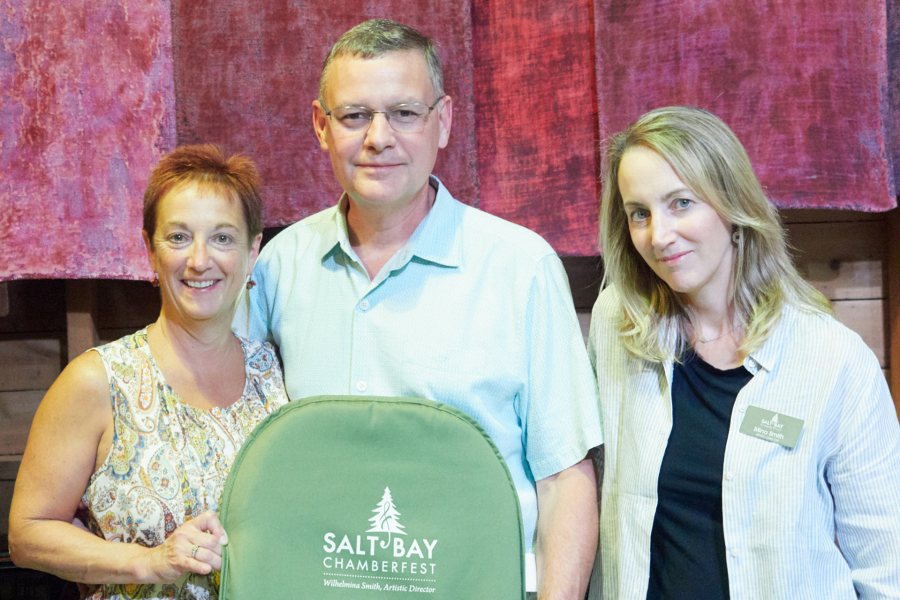 Residents of Harvard, Mass., Miriam Smith and her husband, Michael Acton ’85, are especially close to Salt Bay: Smith’s sister, cellist and artistic director Wilhelmina Smith, founded the festival 25 years ago. (A managing director and head of research at AEW Capital Management in Boston, Michael has served on the Salt Bay board and is acting treasurer. And in another Bates connection to Salt Bay, the late Mary Reynolds, a singer and the wife of former Bates President Hedley Reynolds, was a founding board member.)

Wilhelmina was driven to launch Salt Bay by her interests in advancing contemporary and world music, giving her fellow musicians some gigs, offering robust educational programming, and building strong community ties. In that last area, she got a head start: Priscilla Smith, Miriam and Wilhelmina’s mother, has had a home near Damariscotta in the village of Walpole for decades.

“Though I lived in Massachusetts during the year,” Miriam says, “I grew up coming to Maine for the summer.” The extended family still likes “to gather together” in Walpole, visits that include a healthy dose of Salt Bay music. 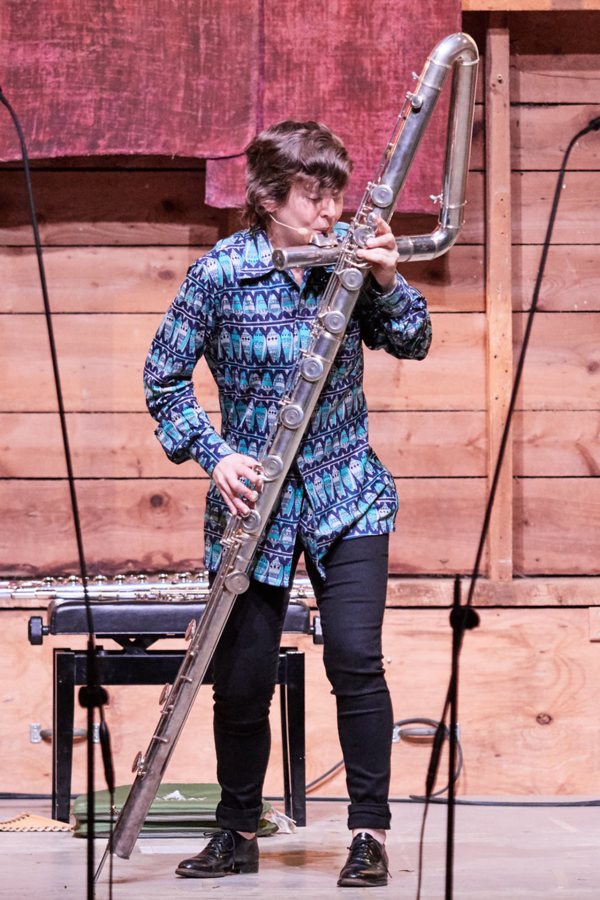 Chamberfest concerts are held for two weeks every August at the former Round Top Dairy farm, a site owned by the Coastal Rivers Conservation Trust on the picturesque Damariscotta River (and a short walk from the famous Whaleback Shell Midden State Historic Site). Miriam calls the setting “gorgeous — it’s just absolutely beautiful. You’re looking out toward the river and it’s peaceful, bucolic, really lovely.”

The festival treats aren’t all visual and musical. The Moo Café serves desserts and adult beverages, while food trucks have been known to appear on the grounds and the renowned Round Top Ice Cream stand is close enough that kids can run up for an ice cream during intermissions.

The concert venue itself is the Darrows Barn, built 90 years ago to store hay (which is still produced at Round Top). Because the main road is some distance away, the big screen doors in the back of the barn admit fresh air but no traffic noise. Wooden barn walls make for good acoustics and Darrows, which seats about 250, is no exception.

Wilhelmina Smith, aka Mina but rhyming with “China,” emphasizes modern and contemporary music in her concert programs. And summer makes musical adventures possible that don’t work in January. Miriam describes a performance of Iannis Xenakis’ “Persephassa” a couple of years ago for which six percussionists set up their gear at points surrounding the audience, who were then encouraged to move around the barn and experience different mixes, so to speak, of the music. 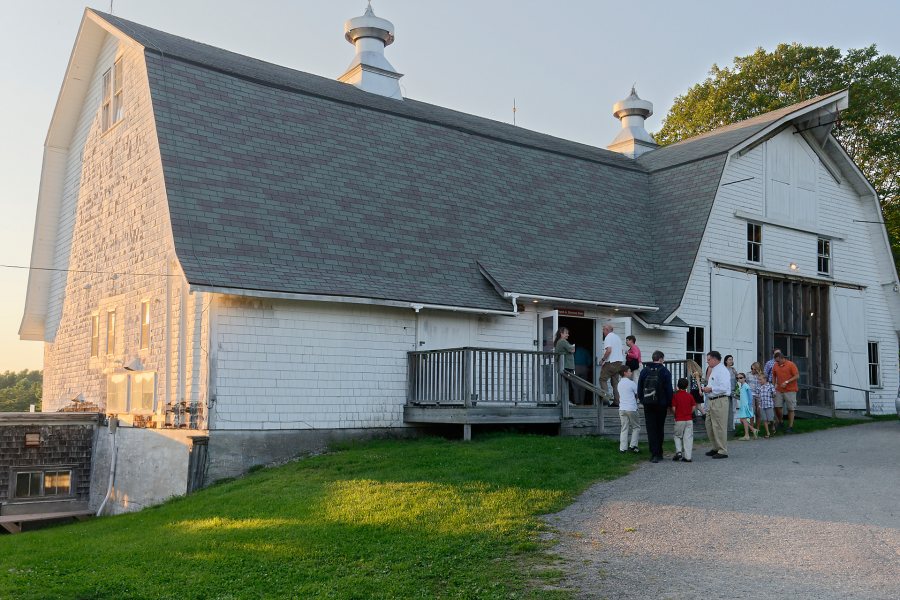 Most Salt Bay Chamberfest concerts take place in the Darrows Barn at the Round Top farm in Damariscotta, Maine. (Photograph by Peter Felsenthal)

And then the next day, Miriam adds, the festival reprised the performance outdoors in the nearby seaside town of Round Pond — with the percussionists stationed on floats and docks on the harbor. “It was amazing,” says Miriam.

The festival is a touchstone for Miriam and Michael. “It’s two weeks of summer that we know is going to happen, that we can plan for — that we know, no matter which concert or concerts we make it to, we’re going to be remembered by people we’ve seen there before,” she says.

For example, Brentano String Quartet violinist Mark Steinberg “has been there almost every year since 1995. He has watched my children grow up — my oldest child was born the year the festival started. And we’ve watched the musicians’ children grow up.

“And a lot of the musicians’ children are also becoming accomplished musicians, and so you see this kind of generational legacy every year. So it really feels like a family.” Speaking of which, Miriam adds that “many times, especially in the early years, everyone who was there to perform would gather down at my mother’s house. And we would have these huge dinners.” 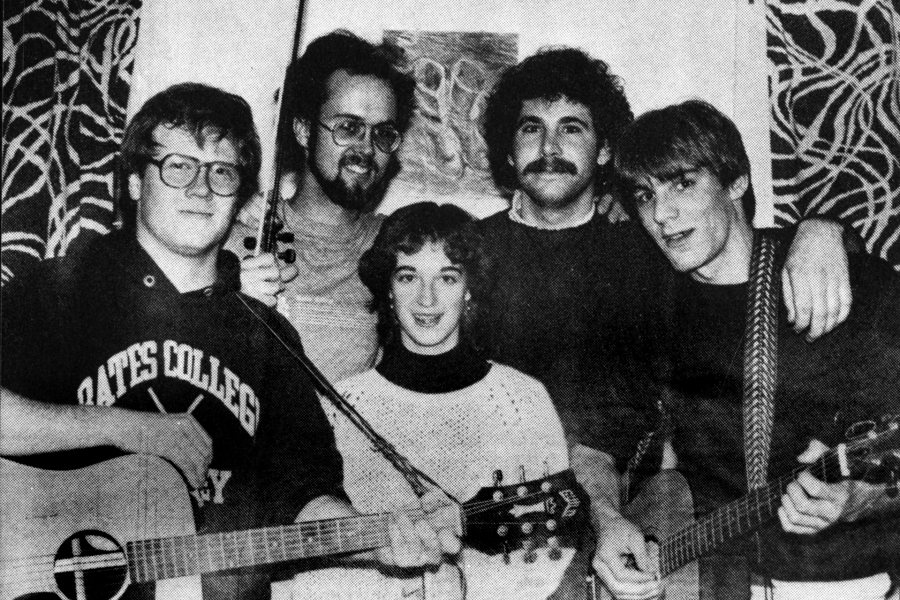 Although she has not made a full-time career of music as Mina has, Miriam plays chamber music with a handful of Bay State ensembles and rocks the Massachusetts–New Hampshire country music scene with Backyard Swagger. (She’s also on the board of directors at Indian Hill Music School in Littleton, Mass.)

Even at Bates, Miriam was combining classical and more mainstream genres. She was concertmaster for the college orchestra, performed chamber repertoire with Frank Glazer — and played parties with Mir and the Bad Examples and Subculture Sextet. Those outfits gave her “my first experience of playing something other than classical music.”

But, she adds, “A big part of the reason I came to Bates was my own summer music experiences in Maine.” In her teens, she attended a summertime International String Quartet Workshop run by the Portland String Quartet at the Sugarloaf ski resort, as did Mina.

“What was really unique about Sugarloaf is that it was people from all over, and younger people as well as much older people,” Miriam says. Learning to communicate socially with folks from different backgrounds was valuable. But the training in musical communication was priceless, says Smith. “When you hear really great chamber music, you’re watching the communication amongst the musicians and it’s really exciting.”

“Maine chamber music in the summer was just a huge part of my growing up,” Miriam says. “For me, Maine and summer and music just go hand in hand.” 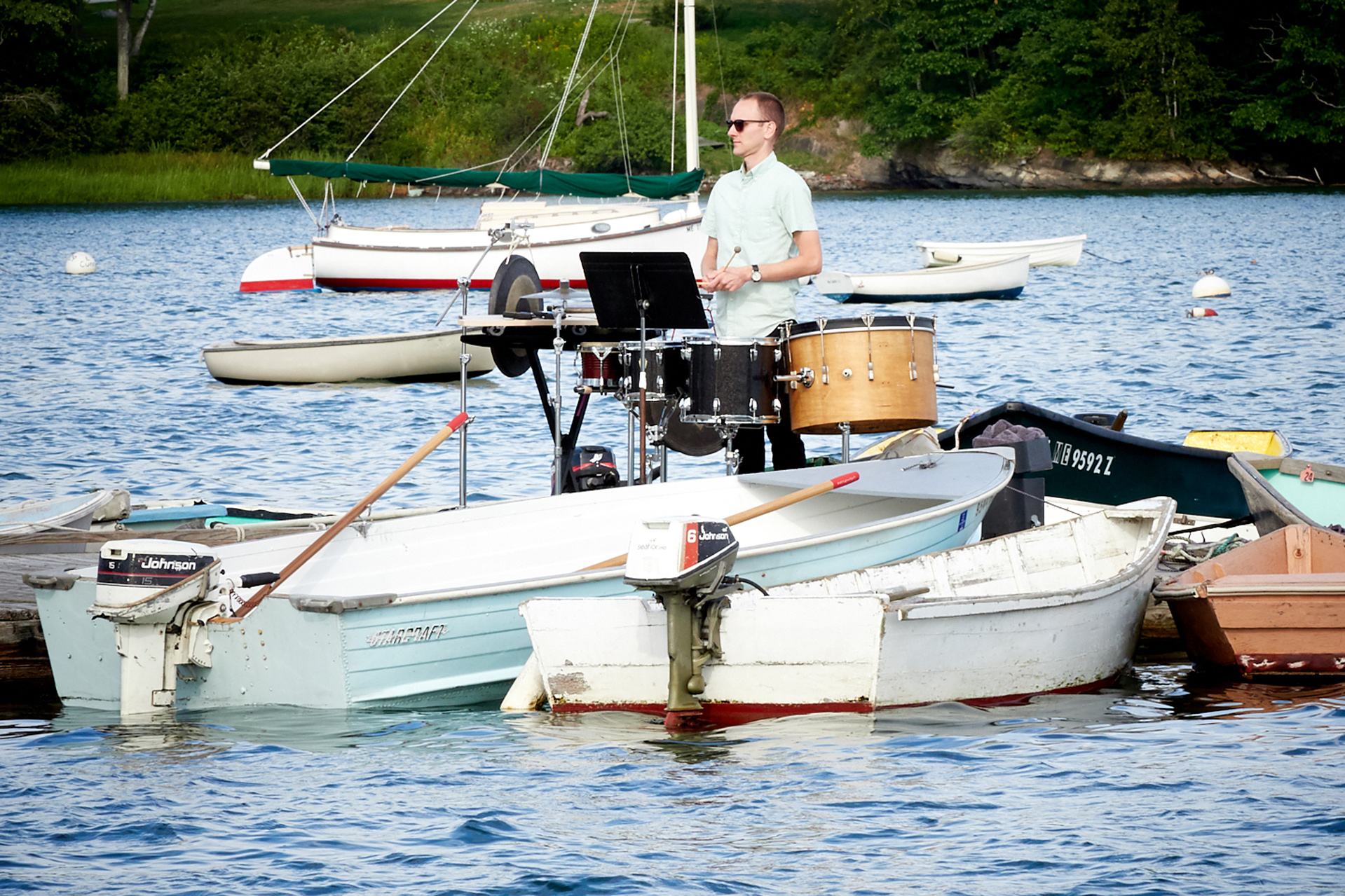 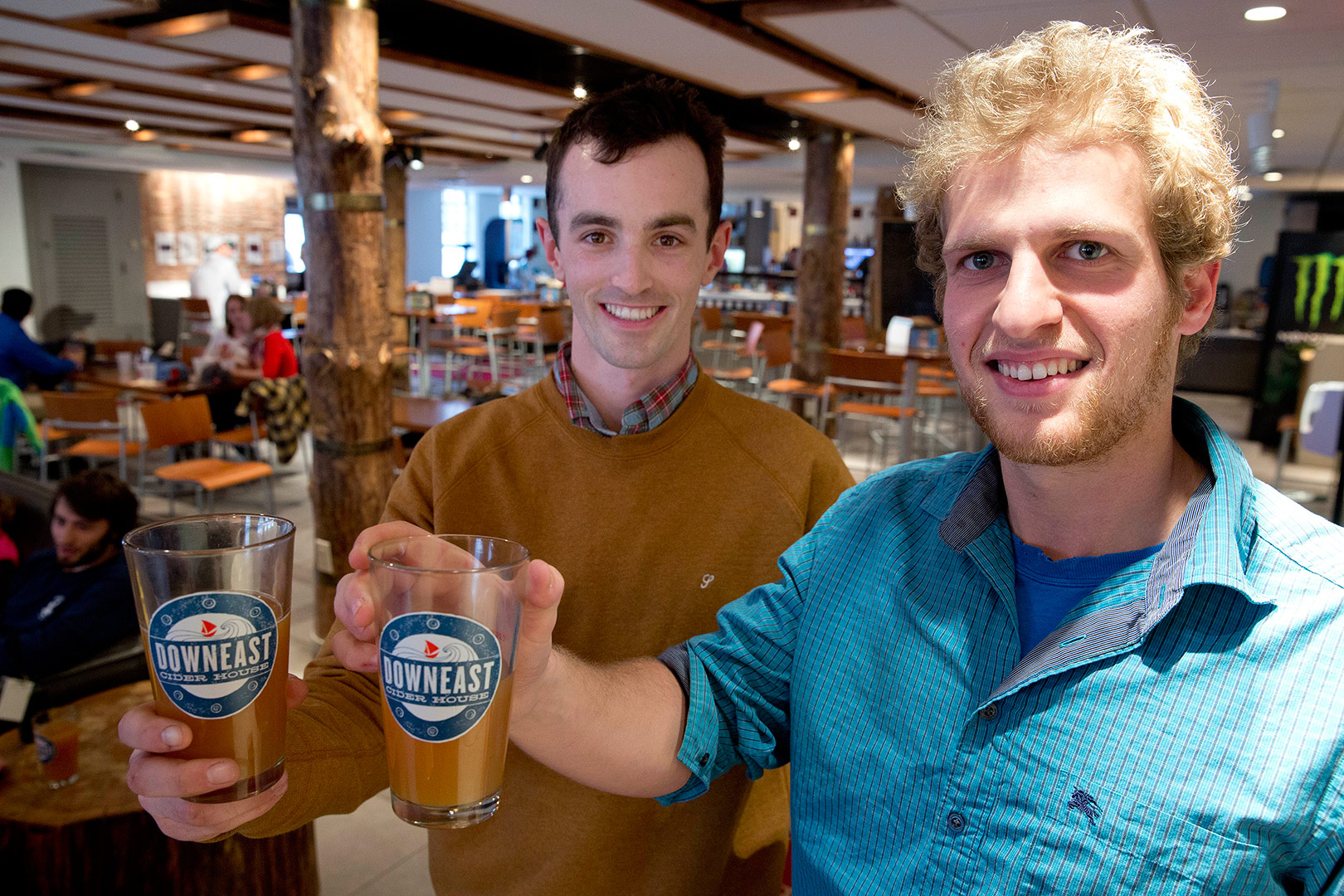