When Dorothy Foster Kern ’42 arrived at Bates for her freshman orientation, everyone was talking about the Great New England Hurricane, which had swept through just days before.

“That’s how we got acquainted,” she says. “‘Where were you when the hurricane came?’”

We met Kern shortly before her 100th birthday, on Sept. 23, at the same Auburn home whence she walked to Bates 81 years ago. Kern remembers her time at Bates fondly. “I loved it,” she says. “It’s been the key to a lot of things.” 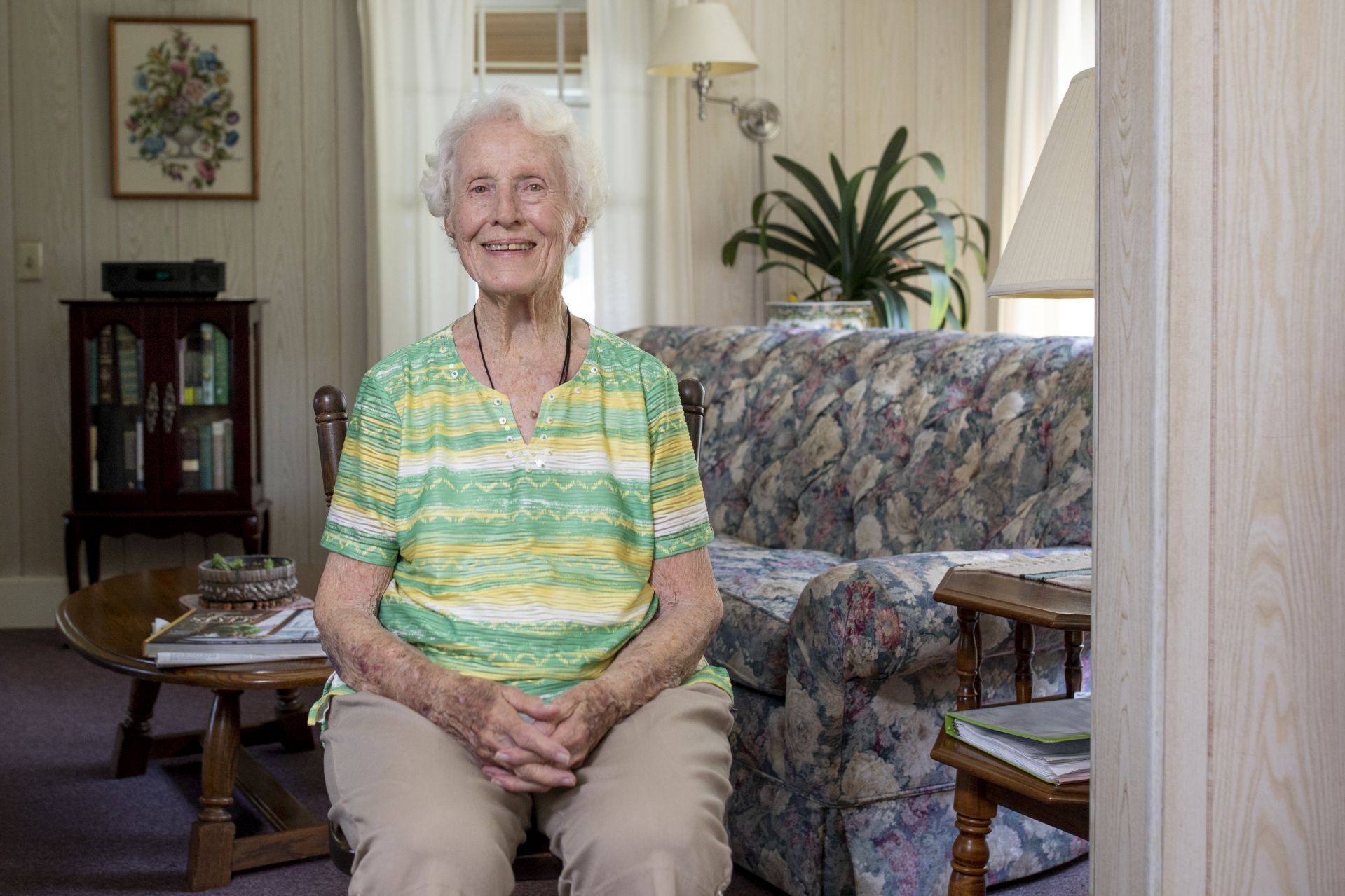 A graduate of Edward Little High School, Kern was inspired to attend Bates in part by a relative, Thomas Angell, who taught languages at Bates from 1873 to 1902. Annual tuition in 1938 was $250. 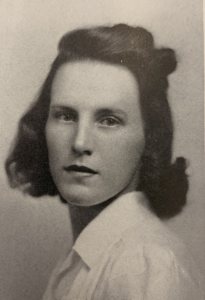 Kern lived at home with her family in Auburn. Each day she’d walk the three miles to campus or, rarely, pay five cents to take the brand-new city bus line. She sometimes took books from the library to study for classes, but “we had a fairly good books here for that,” she says.

Kern threw herself into campus life. She wrote for The Bates Student all four years. Her other activities included the Pan-Hellenic Club and the dance club, of which she was a founding member. “We all dressed in black,” she recalls, in contrast to the more colorful women’s style of skirts and blouses.

Kern was also in Lambda Alpha, the club for the “town girls,” which had space in Hathorn Hall for off-campus women to use as a home base. For sports, she became a goaltender for an intramural field hockey club.

Kern majored in English and took courses in German and French. “I never took a religion course,” she says with some regret. “I wish I had.”

A lifelong churchgoer, Kern enjoyed the required daily chapel services at Bates. But she liked them for more than one reason. “You sat alphabetically,” she says. “I sat near most of the football team. That was very thrilling.”

Kern says she mostly hung out with her high school friends, but she did make Bates friends, including Mary Bartlett ’42, whose father, Paul, was a professor of business economics. She recalls once sharing a dance with William Worthy ’42, who went on to become a prominent journalist and civil rights activist.

In addition to her campus activities, Kern wrote for newspapers in Lewiston and Portland — at least until a dean, concerned for her grades, told her to stop writing for the Portland papers.

It was at the papers she met her future husband, John Kern Jr., who one day invited her ice fishing. “We got acquainted, and we fell in love,” she said.

On a December day during her senior year, Japan attacked the U.S. Navy base at Pearl Harbor. With a journalist’s mindset, Kern covered the local angle of America’s entry into World War II, interviewing professors who had served in World War I and looking into The Bates Student archives to see what students were talking about 25, 50, and 75 years before.

It was “one of the ways to get a perspective on your life as a college student during the troubled ’40s,” she wrote.

Kern recalls, shortly after graduation, going to a procession on Lisbon Street in Lewiston to see off the latest group of men joining the military. “It was this long line of men all with hats and suits,” she says. “They looked so nice.”

Kern’s husband, John, was among them, bound for Europe. She wouldn’t see him for four years.

Kern worked in newspapers through the 1940s and ’50s, primarily writing for society pages, she says. By the late ’50s, she was working on the side at Edward Little High School. The school soon asked her to become the librarian, so she took classes at Colby to get certified and worked in the Edward Little library for the next 20 years. 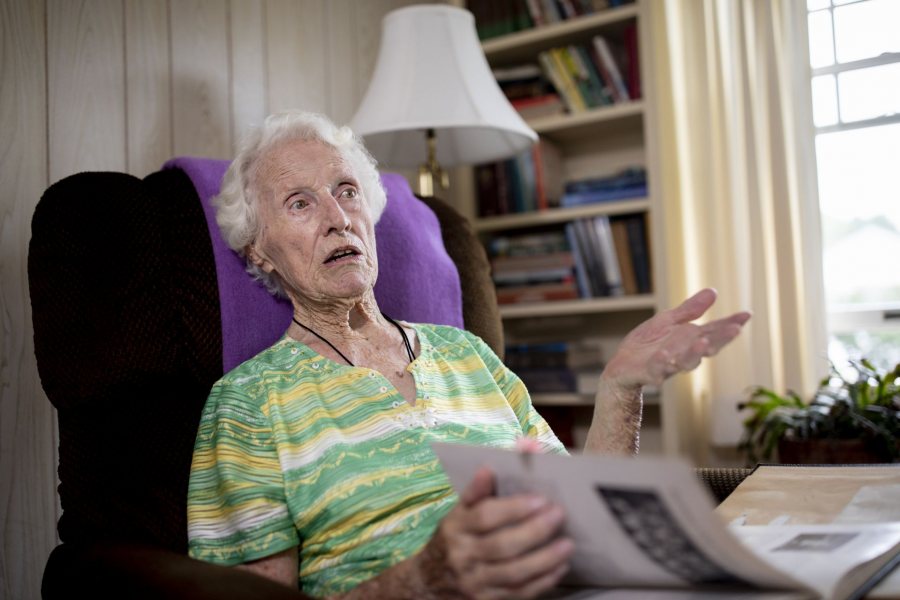 She particularly enjoyed watching young romances blossom. “They started in the stacks,” she says. “That’s where they met, and then they’d get passes on some pretext. They’d come in, and they’d look in the books, and then talk in the stacks. I let them.”

John Kern, who died in 1993, worked nights at Lewiston newspapers for 54 years. Dorothy says he would get their five children out the door in the morning, go back to sleep, wake up for his shift, and get back home at 2:30 a.m.

“I would get up to have a late second supper with him, and he’d always scold me,” she says.

Once, John was pulled over on one of these late-night drives home. “He was going almost 25 miles an hour,” Kern says. “Evidently, that was too fast. We were so angry.” 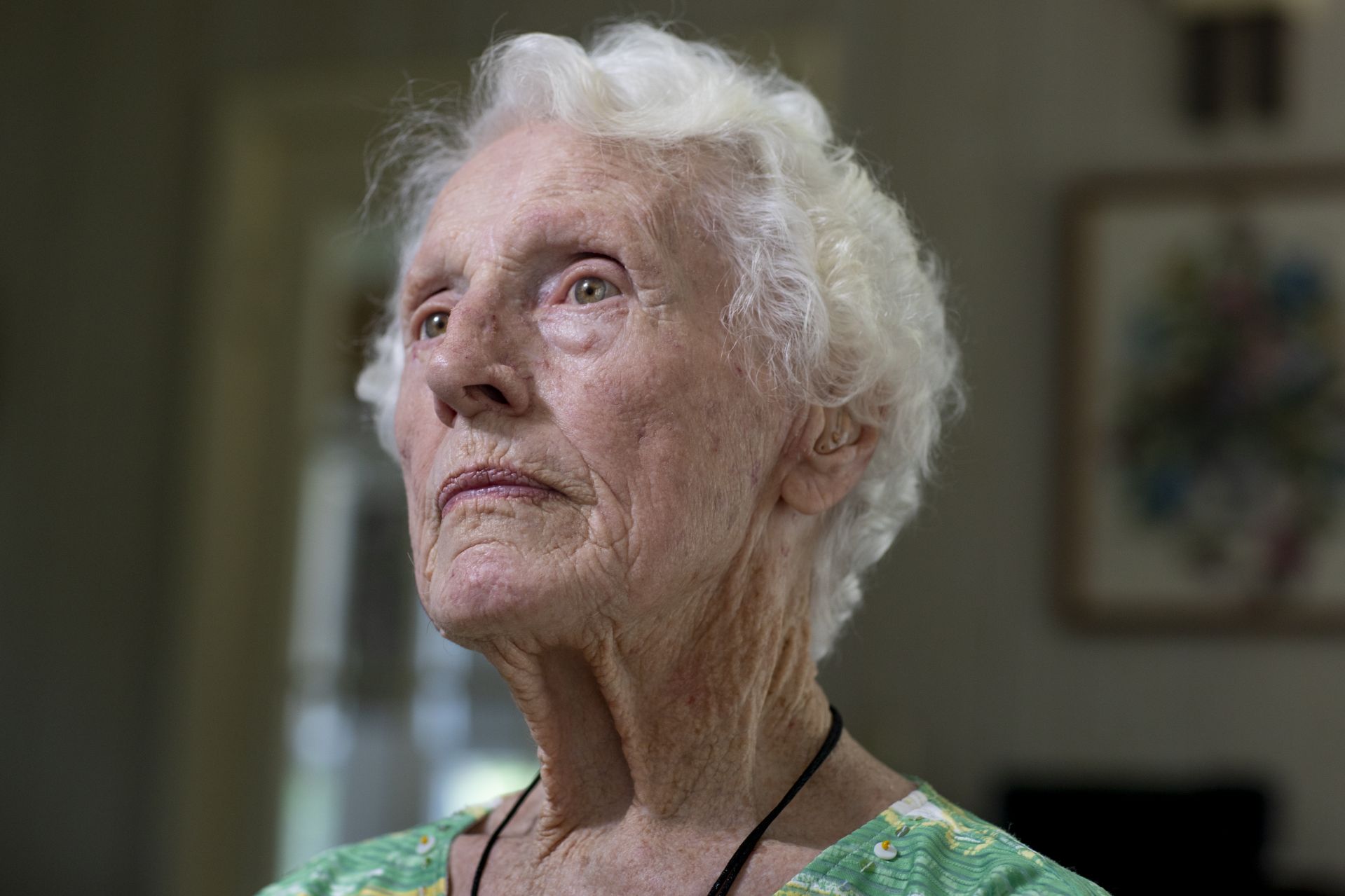 Still living in the home where she grew up, Kern spends her days reading, keeping up with her grandchildren and great-grandchildren (“so many!”) with the help of a wall calendar, taking care of her flowers, and attending High Street Congregational Church in Auburn.

She still remembers the words to “The Bates Smoker,” a traditional campus song. “Oft times at night I light my pipe / and watch the glowing grates …”