‘We have to take action’: Bates students, faculty join in Global Climate Strike

In the September heat, a line of Bates students stood outside Commons, talking about this and that. As they waited to board a yellow school bus, they waved to their friends and passed around sign-making materials.

Members of the Environmental Coalition, the Bates student group that works to raise awareness of climate and sustainability issues, walked around calling the names of those registered to take the bus to Portland, wondering how everyone would fit. 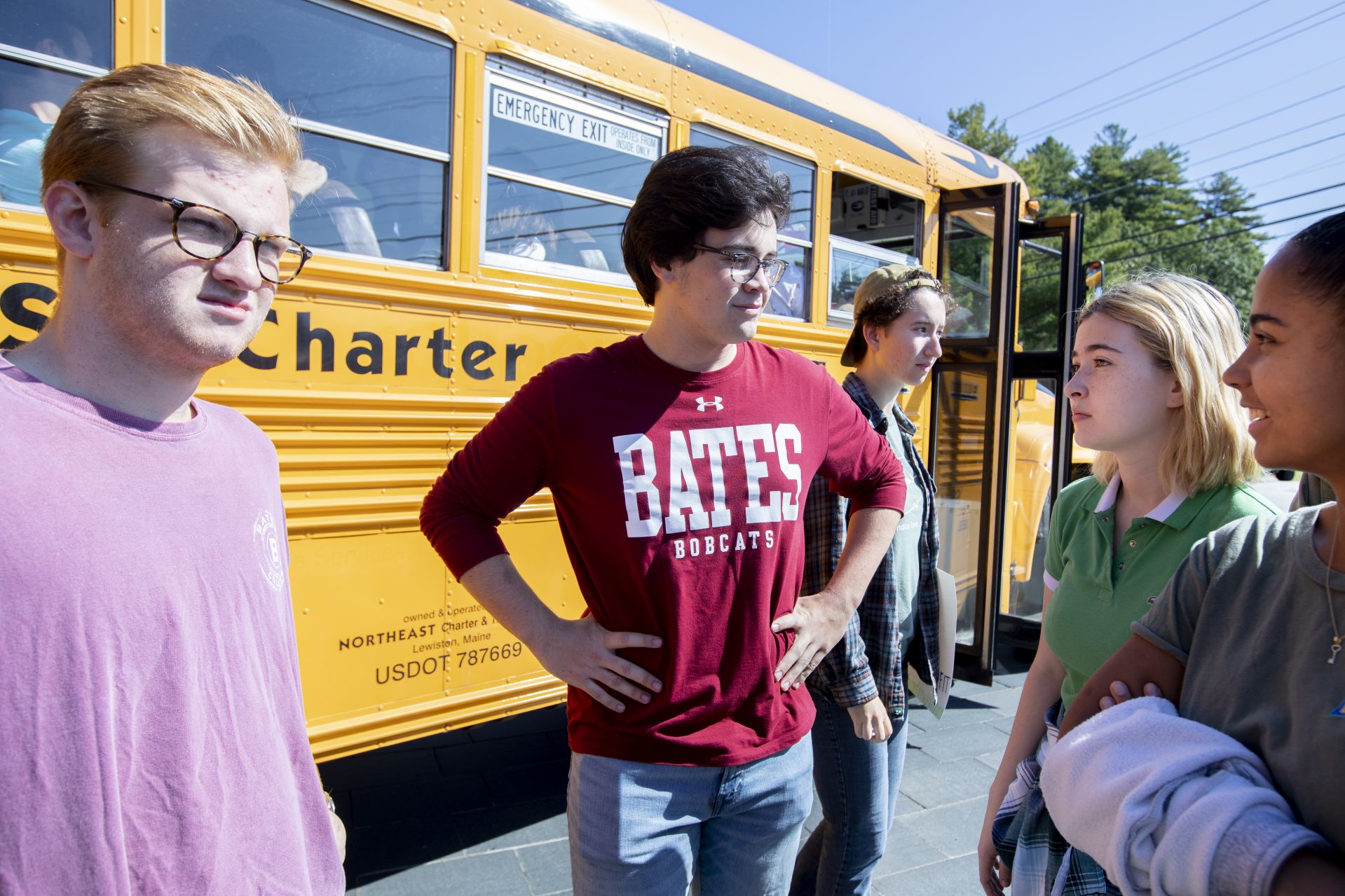 Students gather outside of Commons before boarding the bus for Portland. (Phyllis Graber Jensen/Bates College)

The Bates students heading to Portland were among the millions of people worldwide who went on strike on Sept. 20 to demand climate action ahead of the Sept. 23 United Nations Climate Action Summit in New York City.

“I don’t understand how people can actively oppose this,” said Matt Suslovic ’21, sitting at the back of the Bates bus. Around him, students crammed three to a seat recounted protests they’d attended and brainstormed slogans to put on their signs. 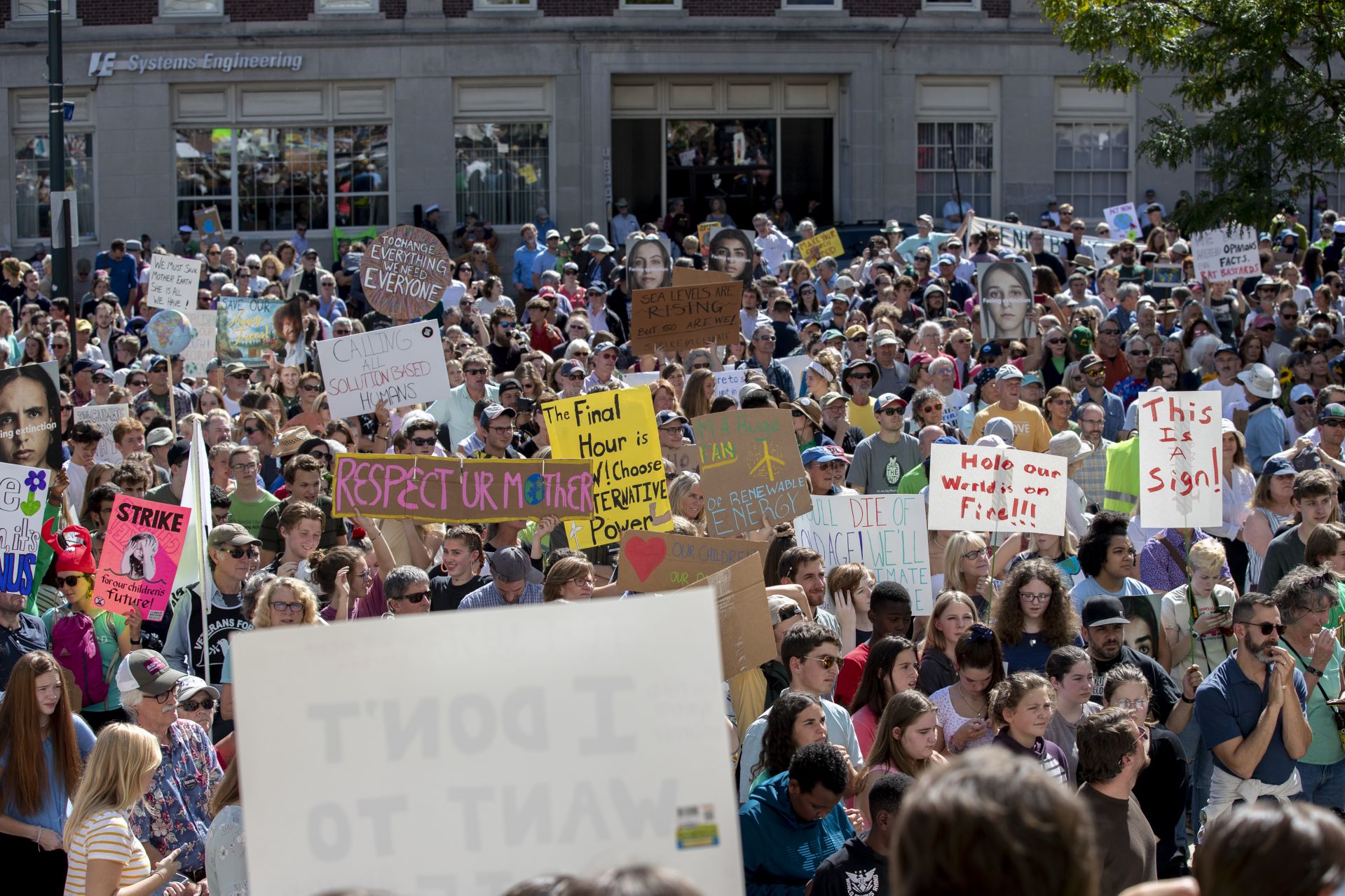 A crowd of 2,000 gathered outside of Portland City Hall for the Youth Climate Strike. (Phyllis Graber Jensen/Bates College)

“I do believe that strikes work, especially if you get a critical mass to send signals and make institutions respond,” said Sonja Pieck, associate professor of environmental studies. “I’m in solidarity with people who are younger than I am and will have to sit this out in a different way.”

For some of the Bates professors in attendance, joining the event reflected their identity as an academic.

“I talk a lot about the importance of getting engaged and organizing,” said Francis Eanes, visiting assistant professor of environmental studies. “It’s not good enough to just talk about issues and solutions — we have to really get involved. I personally would feel like it’s the antithesis of what I’m teaching if I’m not willing to make space for that in my life.” 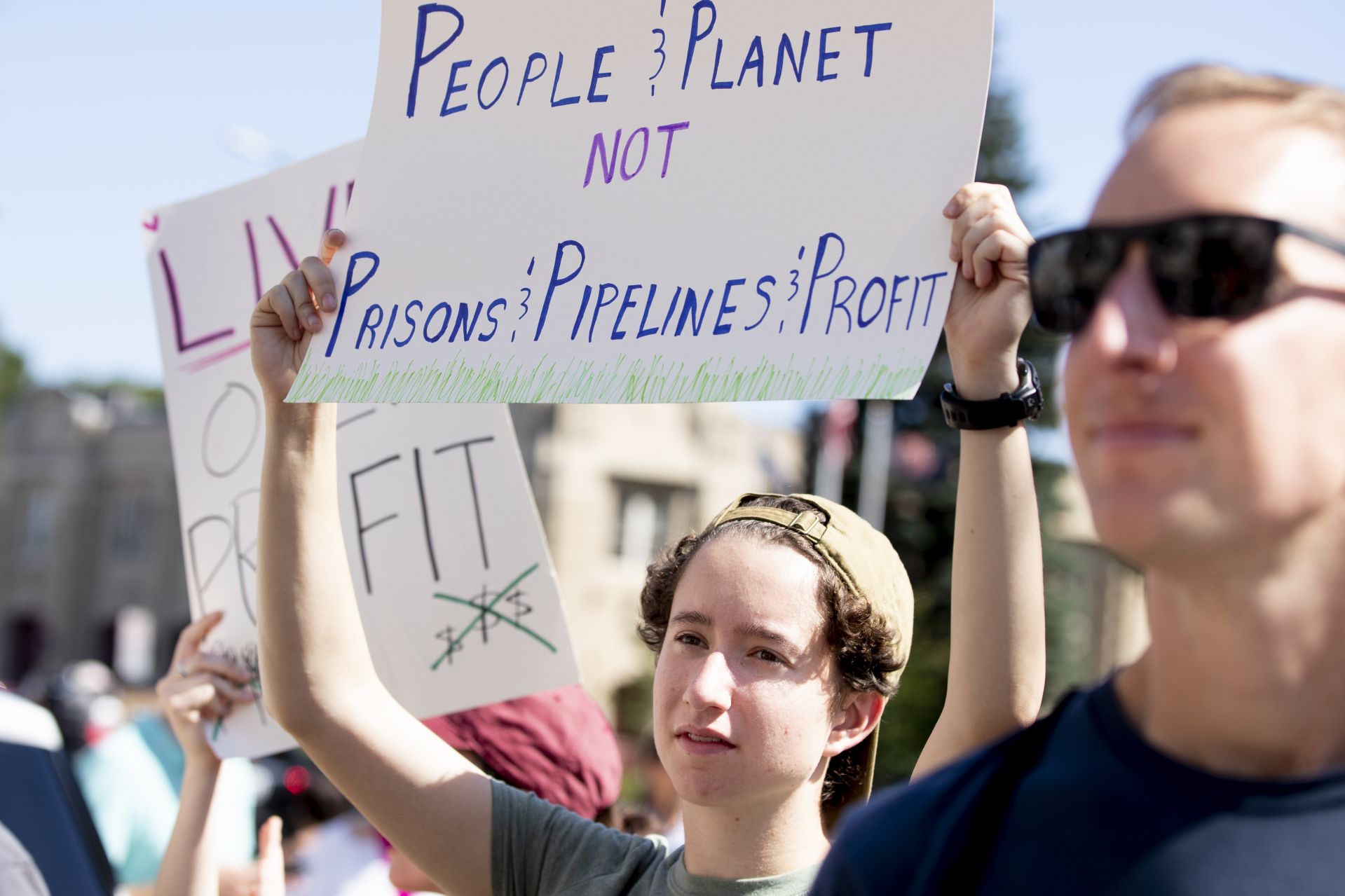 As the bus rolled up to Portland’s City Hall, activists already crowded around the building began to cheer. The Batesies who had driven their own cars and vans cut through the crowd to meet up with their friends, who took in the crowd with wide eyes.

The crowd numbered some 2,000, joining others worldwide: 1.4 million people in Germany, 250,000 in New York City, and a handful of researchers in Antarctica.

Organized by several Maine-based environmental organizations, the event had a strong Bates vibe thanks to the Environmental Coalition’s connections with statewide groups. Of the dozen or so speakers, two were Bates students: Muskan Verma ’21 of Shimla, India, who is the Lewiston hub contact for the Sunrise Movement, and Environmental Coalition president Dianna Georges ’22 of Clifton, N.H.

“I’m not from this country,” Verma said from the steps of City Hall, “but that shouldn’t matter. This is affecting us all. And whether we like it or not, we have to take action.” 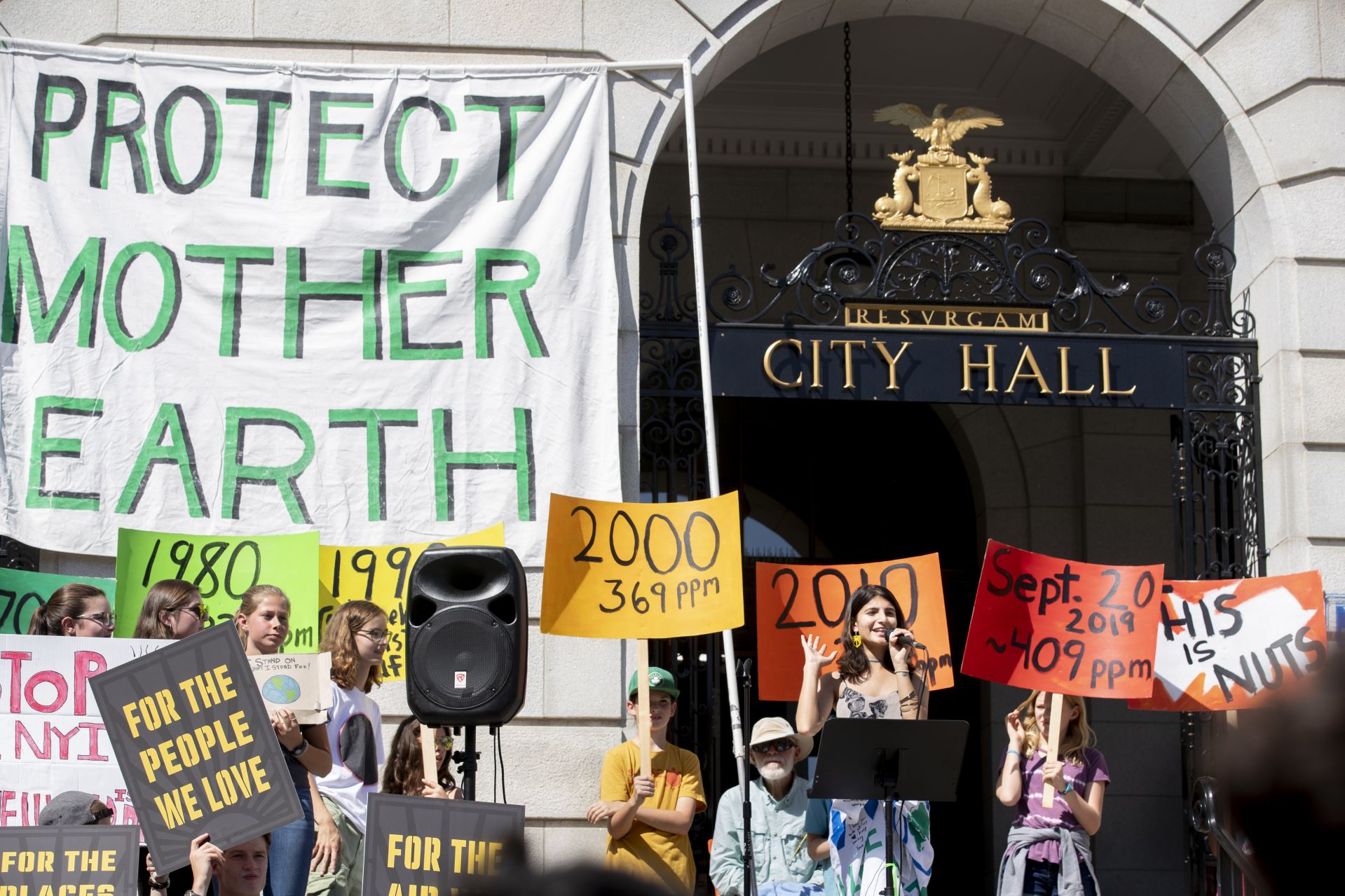 Quoted in a Portland Press Herald story, Georges told the audience that “climate change is the greatest crisis facing humanity, period. Period. …It will affect the lives of people from every part of the world, from every economic class and from every ethnic group.”

Though the speakers’ discourse was aimed primarily at their peers, they reprimanded older generations for their failure to act. They spoke about how climate change is already challenging communities around the world and won’t relent unless citizens, governments, and corporations come together to bring about change.

The Portland protest was “a lot more justice-oriented than the past climate actions that I’ve been to,” Maggie O’Shea ’20.

“People are talking more about equity and inclusion in this, and their signs aren’t just like ‘We love grass and trees.’ It’s about clean air and clean water for all, and that’s super exciting.” 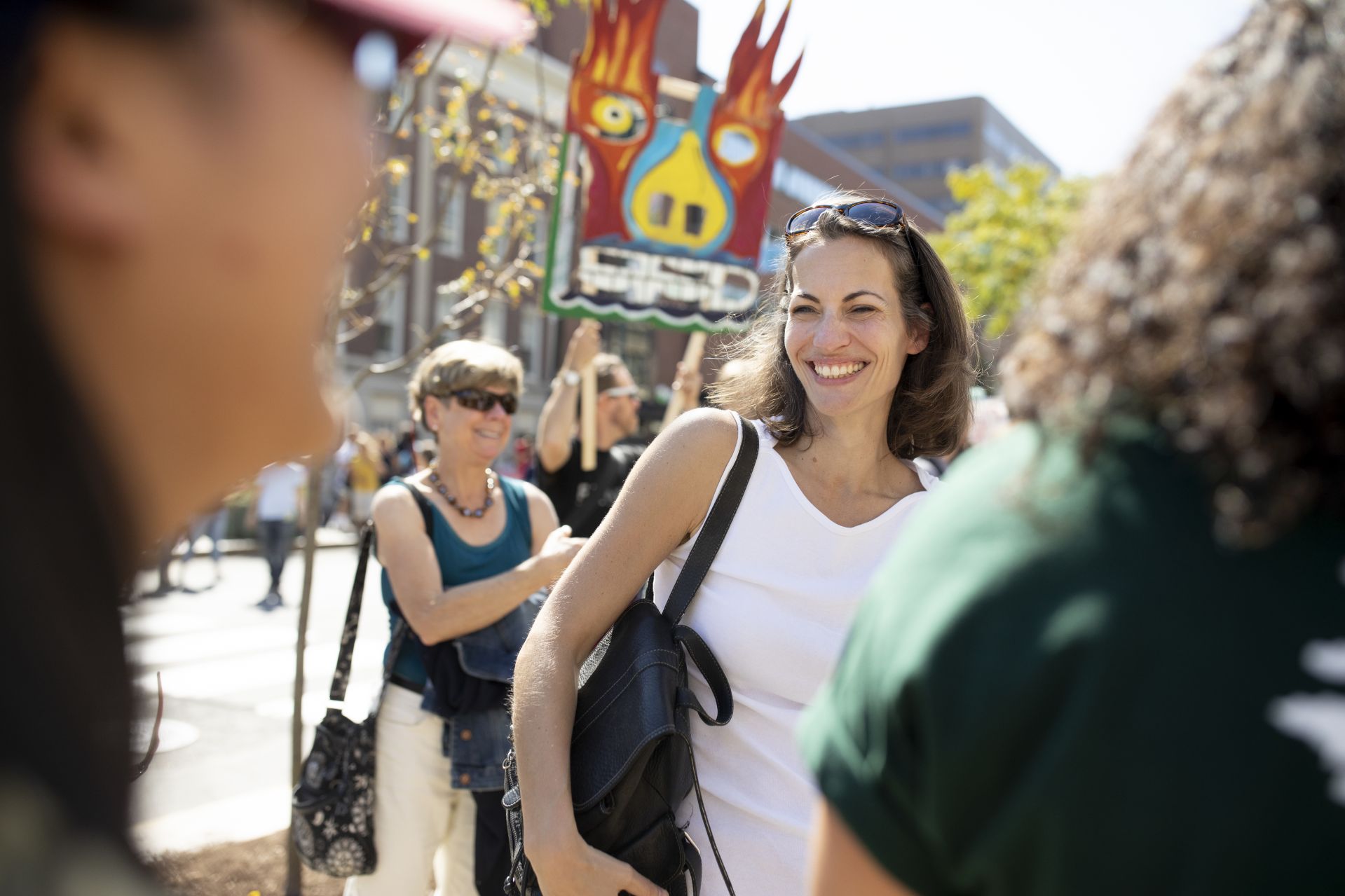 When the speeches ended and the crowd dispersed, some of the Bates folks made their way to Lincoln Park to enjoy some pizza in the shade and debrief each other on the event. Students also caught up with some of their Bates professors who had attended the event.

Notwithstanding the somewhat disappointing outcome of the UN’s Climate Action Summit a few days later, Pieck remarked on the positive vibe of the Portland strike. “A lot of the climate discourse is very negative, and so it’s cool that we can rally and be really positive and optimistic about change. You could feel the youth.”

“We were part of the largest climate mobilization in U.S. and global history,” added Georges. “To me, that represents how much people are caring and noticing this issue. But we can’t rest now: There is so much left to do.” 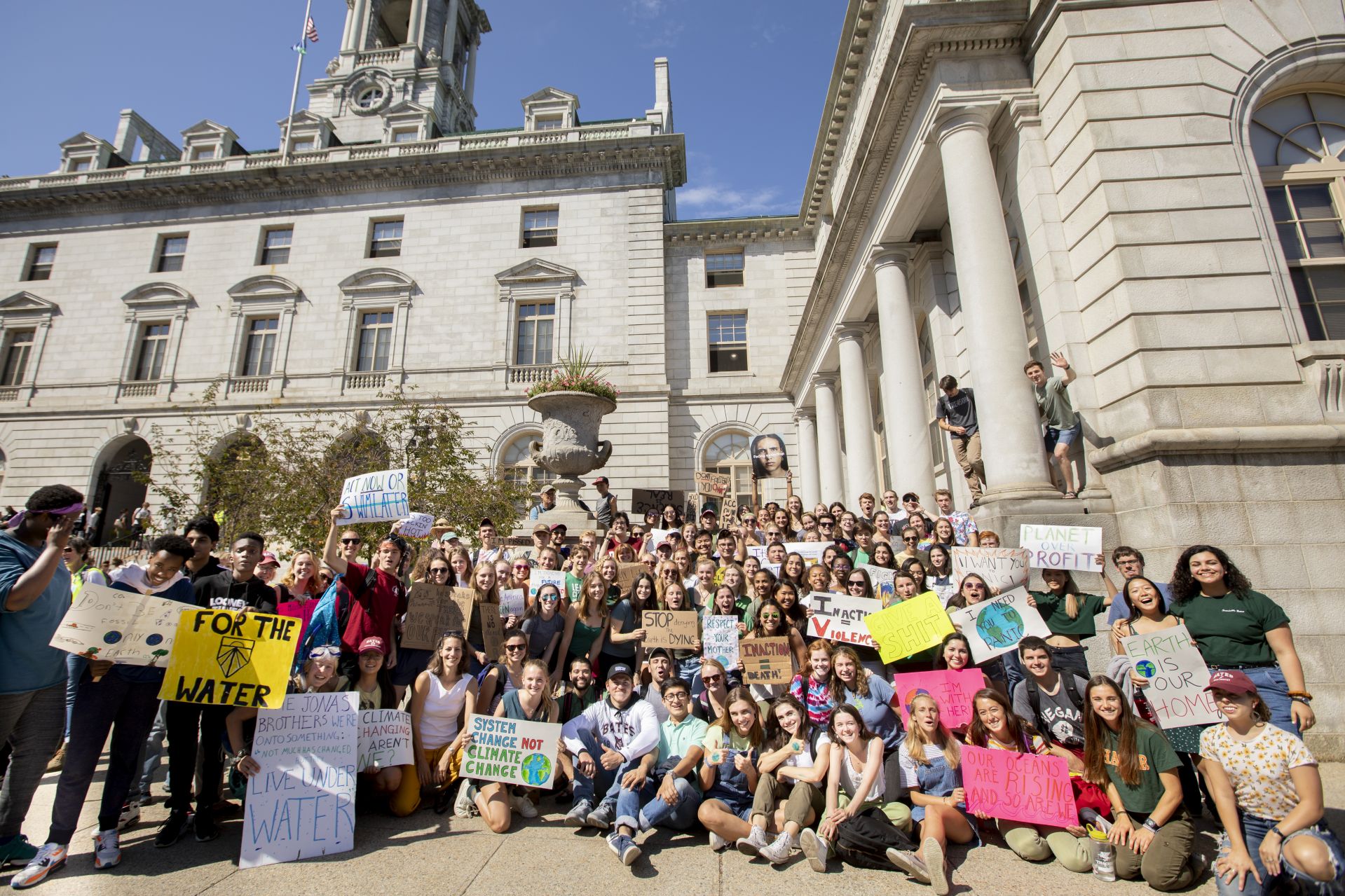