My Last Year: Jane Costlow, a professor-activist ‘in solidarity with others who really care’

For a professor in her 34th and final year on the Bates faculty, a teachable moment can occur almost any time, even during a visit to a Trader Joe’s in downtown Portland, Maine.

After joining last month’s Global Climate Strike on the steps of City Hall, and then eating pizza with the large Bates contingent at nearby Lincoln Park, Jane Costlow and her fellow travelers — three first-year students she’d met that morning, plus a photographer — headed back to her Toyota Prius.

Join us as we follow Jane Costlow — esteemed Bates teacher, scholar, and colleague — month by month during her 34th and final academic year.

As the group’s conversation transitioned from climate disaster to more routine matters, Costlow acquiesced to the students’ unsubtle hints about stopping at the local Trader Joe’s. 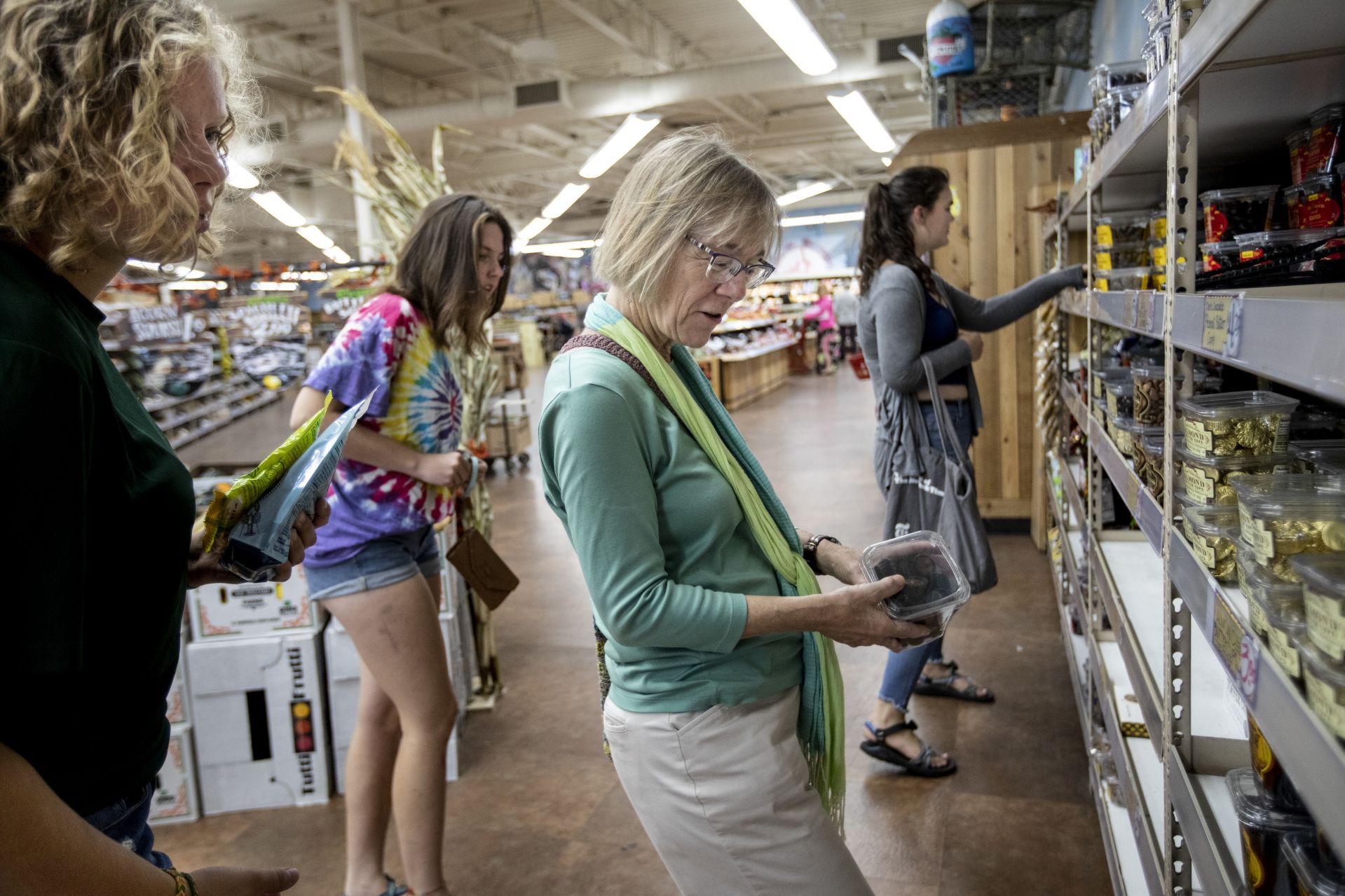 A trip to a Trader Joe’s store in Portland became a teachable moment for the three young students who accompanied Jane Costlow to the Climate Strike in Portland on Sept. 20. (Phyllis Graber Jensen/Bates College)

It was Costlow’s first visit to the grocery chain famed for its house-brand products, among other things, and it took her back to the 1980s. As a newly appointed Russian professor, she began leading students to the former Soviet Union during Short Term, accompanying them on excursions to buy food in cities like Leningrad, Odessa, or Moscow.

“Uncannily Soviet,” she declared after entering Trader Joe’s. “Not as many flashy colors” as a typical large supermarket, “and sort of subdued — except, obviously, there’s a lot more food here.”

For Costlow, the two events, a climate protest followed by shopping for crackers and chocolate, raised questions that she really wanted to pose to her young passengers. 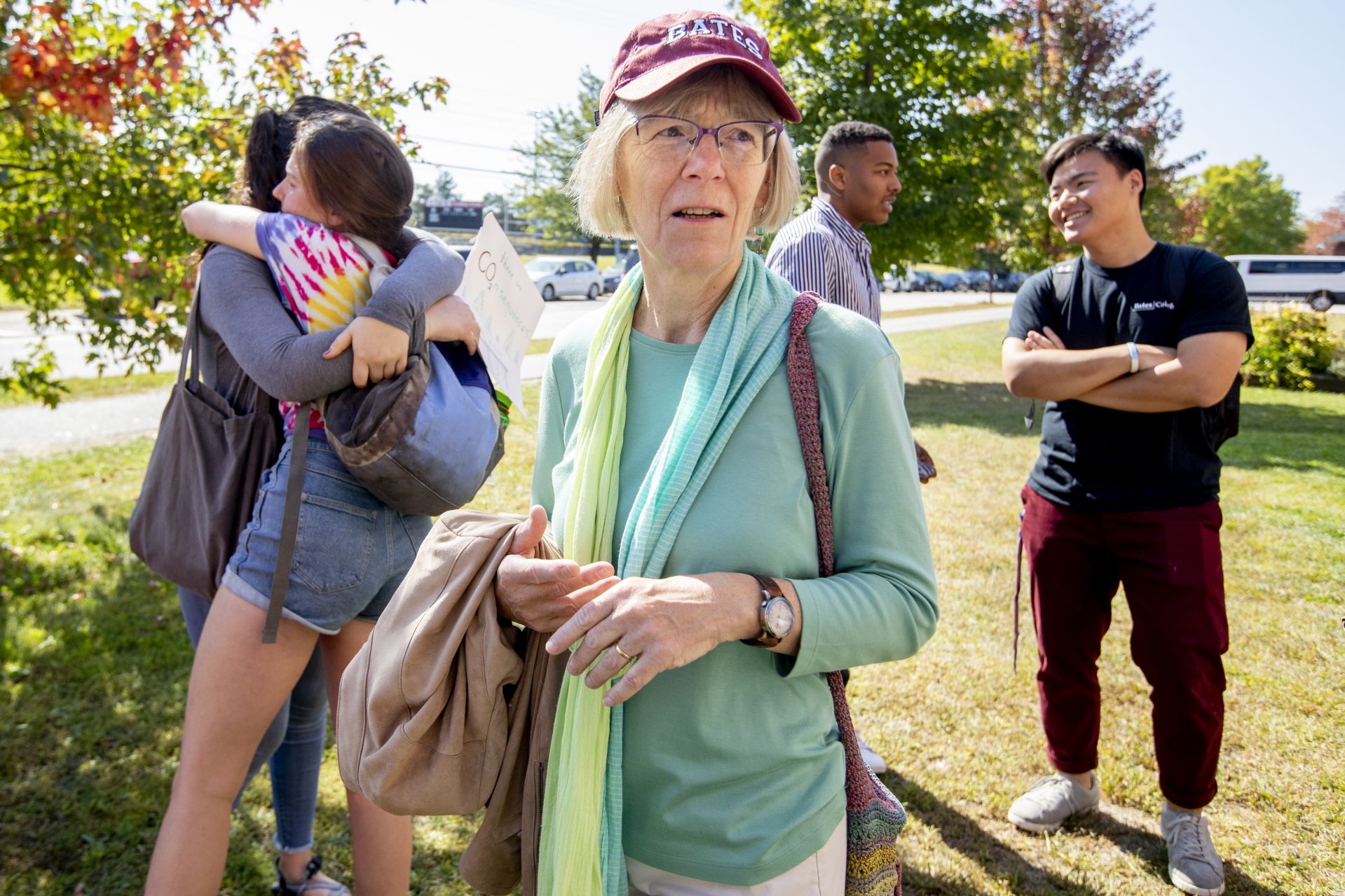 With the student bus at Bates nearing capacity, Costlow waits to see if she needs to drive students to the Climate Strike. (Phyllis Graber Jensen/Bates College)

“You go to a rally, trying to raise your voices about this extraordinarily challenging, difficult, and looming crisis. And then you do this kind of mundane 21st-century American thing of going to a national grocery chain, where there’s lots of food that’s brought in from all parts of the world, and packaged for us with more packaging than there needs to be.”

Not knowing the three students, she figured a rant wasn’t the right approach. “I didn’t want to come across as this sourpuss who was raining on their parade.” Instead, she simply engaged them in conversation.

Such as: “Do you think about what shopping at Trader Joe’s means in terms of supporting local merchants or local agriculture?” When people have raved to Costlow about Trader Joe’s, she’s responded that part of the reason she’s never patronized the chain is her desire to support local agriculture and merchants.

The conversation flowed naturally and allowed her to suggest places near Bates that the students could visit, such as Lewiston’s Farmers Market at the Bates Mill complex. Although the students don’t have cars, “they might have to walk, which would also be good.” 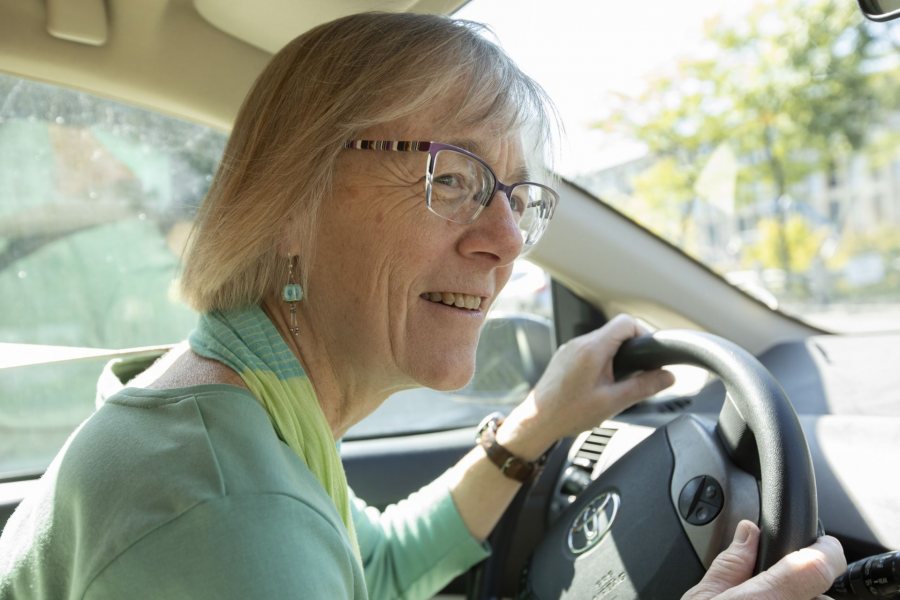 As she engaged her passengers about sustainability, “I didn’t want to come across as this sourpuss,” says Costlow. (Phyllis Graber Jensen/Bates College)

Joining the Climate Strike allowed Costlow, once a Russian professor and now the Clark A. Griffith Professor of Environmental Studies, to reflect on her responsibility, as a professor-activist, to her students, to teaching, to research, and to the world.

And on another level, she was just happy to join the protest. “Amid all of the frustrations around this issue, it did feel wonderful to be in solidarity with other people who really care about it,” she says.

“And I do profoundly believe that there are moments when putting your body on the street, even at a really safe rally, in some ways makes a difference.”

Costlow is proud of the Bates students, several of whom she knows well, who organized the big Bates turnout at the Portland event. “They’re trying to juggle lots of different responsibilities and coursework. They’re trying to figure out the logistics of how you get buses, how you organize people, how to get them signed up, even how to get pizza delivered for lunch.” 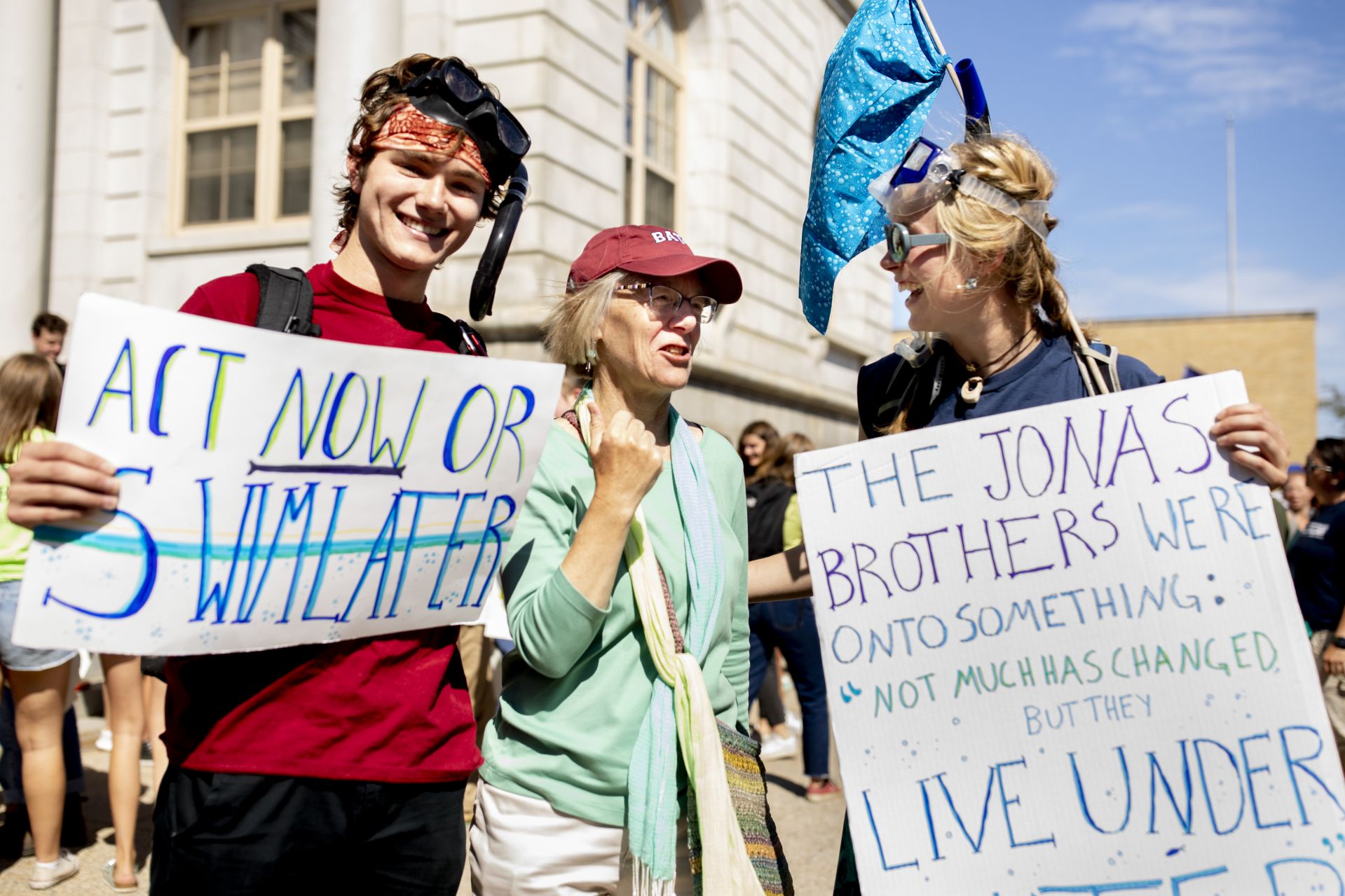 Costlow knows of what she speaks. As a graduate student in the 1980s, the era of peak protest against nuclear weapons, she worked with community groups to organize trains from New Haven to New York City for a huge rally. “It’s the nitty-gritty of organizing and communicating — those are fabulous experiences our students are getting.”

Appointed as a Bates professor of Russian in 1986, Costlow began to explore environmental topics in the 1990s. For example, an early course on country life in Russia examined how ideas about nature have permeated the Russian psyche.

In 1998, she joined the college’s nascent Program in Environmental Studies, and in 2012 she was appointed to the Griffith chair; at the time, Carl Straub, her predecessor as the Griffith professor, praised the “momentum in Jane’s academic and scholarly journey.” 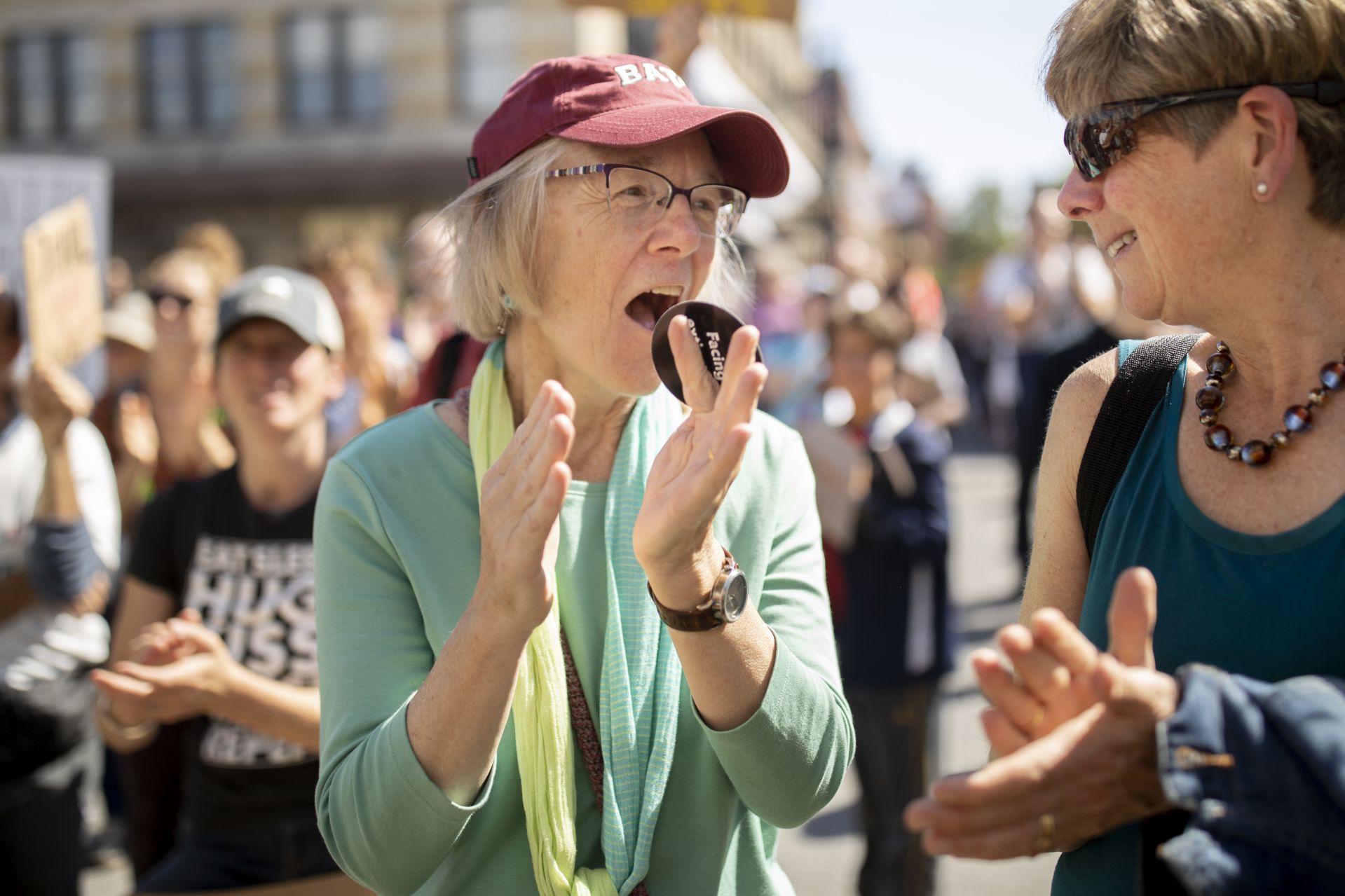 At the Sept. 20 Climate Strike in Portland, Costlow responds to a speaker with Sue Inches, who led the Short Term practitioner-taught course “Advocating for Sustainability” last spring at Bates. (Phyllis Graber Jensen/Bates College)

Just as her academic focus has changed, so too have the global issues at stake. Back then it was the Cold War; today it’s climate change.

And while Costlow is no stranger to the teaching the topic, she says there’s still a “huge dilemma in how to communicate about climate change. Everybody gets why this is so important. But how do we communicate the urgency? How do you get people engaged? What policies are you promoting in your communication?”

She points to a pivotal class discussion this semester in her course “Lives in Place,” which explores ideas about place and sustainable living.

Talking about the impact of visual images on political movements, be it climate change or immigration, a student wondered if the proliferation of heartbreaking images, such as ones of emaciated polar bears, can really influence policy.

Costlow asked her students to consider the influential images created by Dorothea Lange, one of several Farm Security Administration photographers who depicted a climate- and human-created environmental disaster of another time, the Dust Bowl.

That got the students to think about “political transformation — how artists, photographers, and writers can make a difference by creating a language for how we’re going to try to contend with these enormous problems.” Whether as a journalist or activist or engaged citizen, her students will need the tools “to try to change people’s hearts and minds.”

Back in the day, teaching about Russia, especially during the Soviet era early in her career, “felt real and tangible,” Costlow says. There was an entity: the Evil Empire. Teaching about the Soviet era was about “how people can still make lives of dignity in difficult political circumstances.” 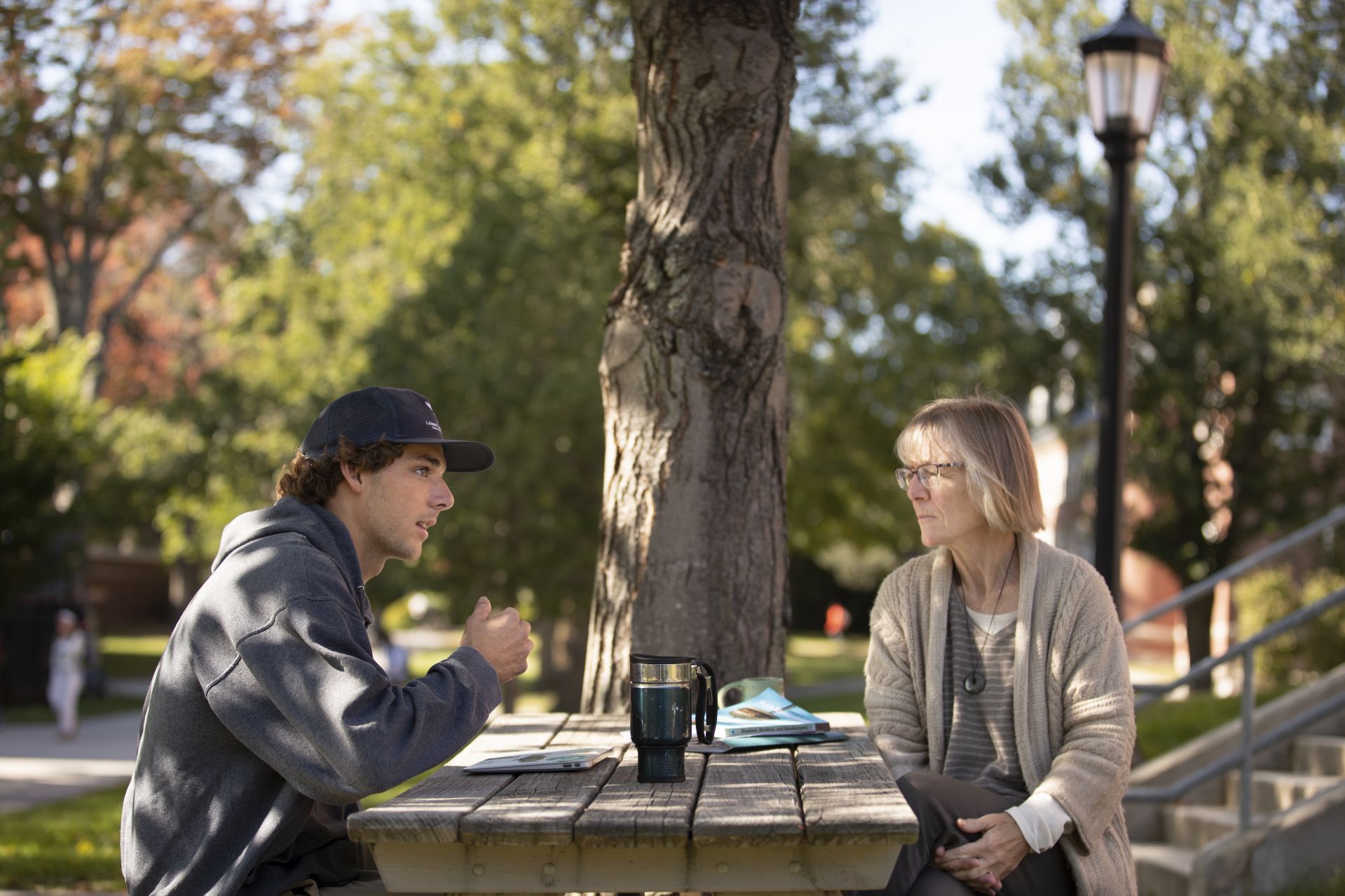 “You can just tell that she appreciates life and nature by the way she teaches,” says Lars Schuster ’20, an environmental studies major from Simsbury, Conn., meeting with Costlow outside Roger Williams Hall to discuss his senior thesis. (Phyllis Graber Jensen/Bates College)

Back then, Costlow’s approaches in the classroom — “I could show movies, have readings, and do exercises in class to talk about the history” — helped to demystify the issues and even reduce the tension her students felt.

But climate change presents “a different narrative arc,” she says, one that places “all of us right in the middle, trying to figure out how we can change our systems and our infrastructures so human lives, and non-human lives, can continue to flourish.”

And the narrative arc of the Soviet Union had an ending point: the USSR’s dissolution, in 1991. “I don’t think that the climate crisis is going to end the same way. It’s going to be something we’re going to live with for a long time.” 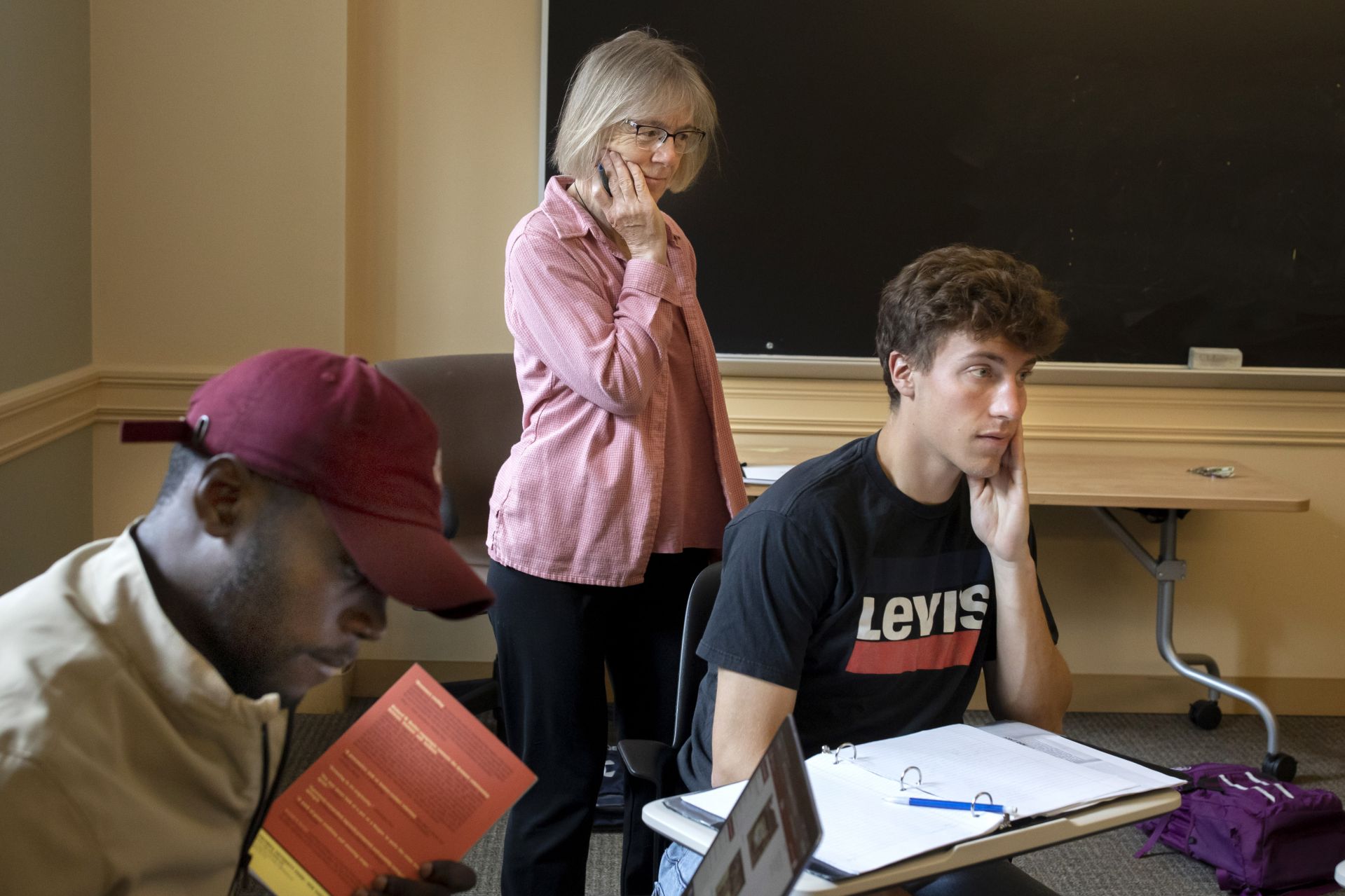 It’s no wonder, then, that Costlow reports that climate topics in the classroom are often met with “a kind of very disturbing silence” from students, Costlow says. “I think that it derives from that sense of fear, of not knowing where we can go. And I struggle with where to go from that.”

One approach, she says, is to show examples of how communities now contend with climate change. “Sometimes those are really inspiring stories,” she says. “And sometimes they’re just hellishly depressing stories.”