A Bates College professor is central to a four-state effort, supported by a $5.9 million, four-year National Science Foundation grant, to use high technology against a low-tech problem: the increasing hazard posed by cyanobacterial blooms in lakes.

The question of data about lake conditions — how to get a lot more data and then how to make use of it — is the crux of the NSF-funded project.

Naturally occurring in lakes, these organisms under certain conditions undergo population explosions that produce, among other problems, toxins at levels that may be hazardous to people and pets. These pose a particular threat for communities that take their public drinking water from lakes, as Bates’ hometown of Lewiston and its twin city Auburn do from Lake Auburn. 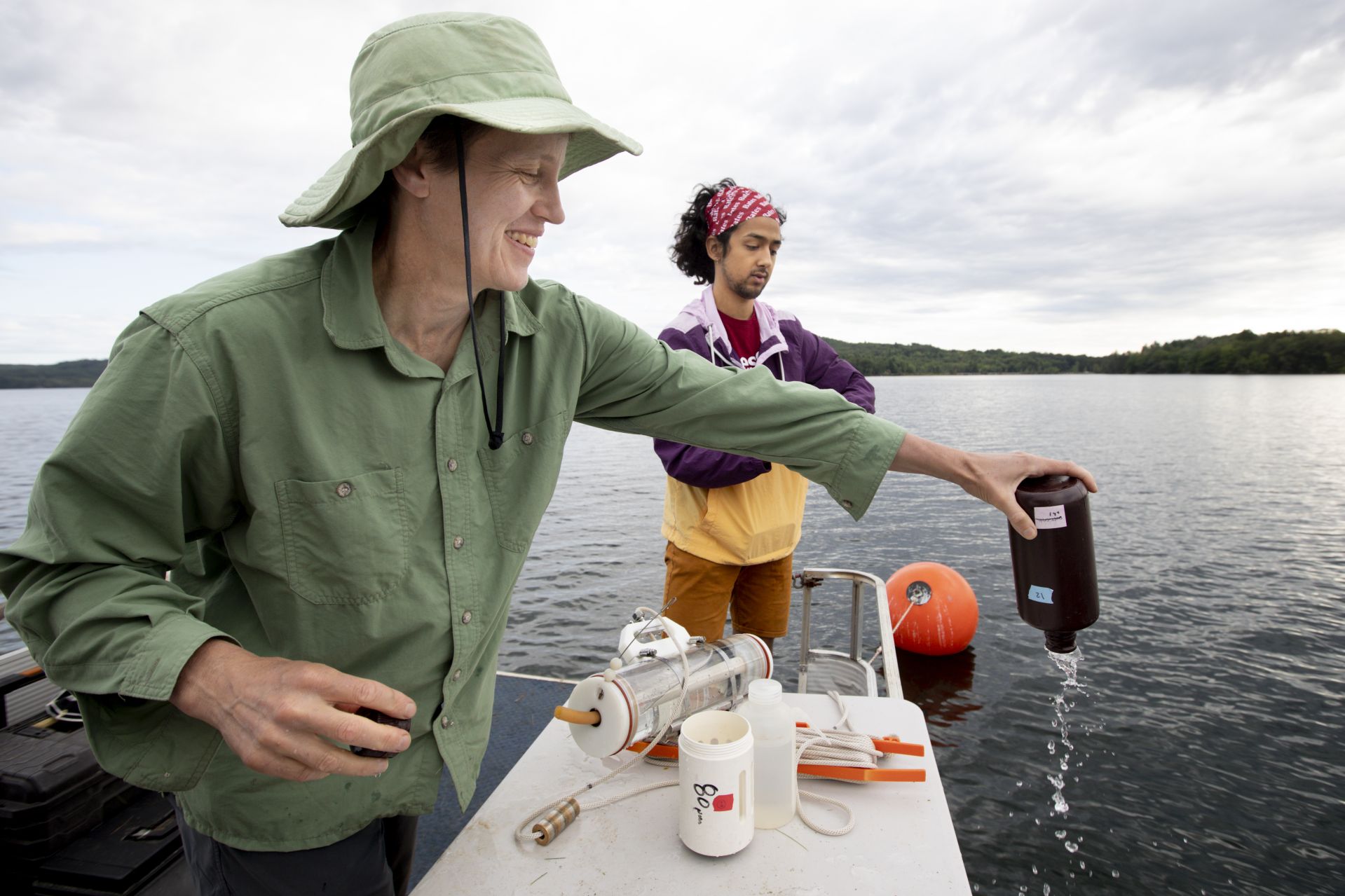 While it’s generally understood that climate change and changes in land use drive cyanobacterial blooms, there’s still much to learn about what provokes blooms in individual lakes.

So the question of data about lake conditions — how to get a lot more data and then how to make use of it — is the crux of the NSF-funded project, titled “Computational Methods and Autonomous Robotics Systems for Modeling and Predicting Harmful Cyanobacterial Blooms.”

The project team will devise analytical and modeling tools that can rapidly integrate masses of varied data (for instance, dissolved oxygen levels, pH, and water temperature) into real-time assessments of a lake’s vulnerability to a bloom.

The project will use as test sites four lakes in Maine, including Lake Auburn and nearby Sabattus Pond, as well as lakes in New Hampshire, Rhode Island, and South Carolina.

Some data will come from existing sources, such as ongoing water sampling programs and an automated sensor buoy that Ewing placed in Lake Auburn in 2013.

But, in an innovation that’s key to the project, the researchers will deploy sensor-equipped autonomous robots — boats and aerial drones — that can gather information with minimal human oversight and, ideally, adapt instantaneously to changing circumstances.

“The hope is that the larger amount of data and the models that it can drive will help us understand blooms better.”

Which leads to another major project goal: how to interpret all that data quickly enough to anticipate a harmful cyanobacteria bloom. “Across these different platforms, the data will be collected at different temporal scales, at different spatial scales, and they represent different kinds of information,” Ewing says. “Some data will be meaningful instantaneously, and others will require additional processing.

“So data integration is a major task. And then the hope is that the larger amount of data and the models that it can drive will help us understand blooms better.”

“It is rare to have teams from so many different specialties converge to study a problem like this,” says Quattrini Li. “By working together, we can increase the amount of data that can be collected and increase prediction capabilities.”

Bates’ portion of the NSF grant is $841,776. Out of 11 seven-figure grants made so far in 2019 through the NSF’s EPSCoR program (Established Program to Stimulate Competitive Research), designed to build research competitiveness in selected regions, this is the second in which Bates is involved. (The other, led by Bates neuroscientist Michelle Greene, is the creation of a first-of-its-kind visual experience database.)

The field of environmental studies is inherently collaborative. “It’s the way science happens. You have to be able to collaborate,” says Holly Ewing.

Ewing has a key role in coordinating the overall effort, aligning the needs of the lake research with the capabilities of the robotic and computing technology.

“My role has been to frame the ecological questions, frame the lake science that needs to happen, and guide the integration of science with the robotics,” she says. “I’m trying to help identify how the technology can best be used in the service of the science itself.”

In addition, Ewing will coordinate the Maine activities, which also involve Bruesewitz, who specializes in aquatic ecosystems. Ewing will lead water sampling efforts at Lake Auburn and Sabattus Pond, and Bruesewitz will oversee sampling at China Lake, near Maine’s capital of Augusta, and Great Pond near Waterville (one of six Great Ponds in Maine).

Ewing, who joined Bates in 2004, brings to the project a long dedication to the study of lakes (aka limnology), particularly questions around water quality. Lake Auburn has been a focus of her efforts.

In 2013, as part of an earlier NSF-funded study of cyanobacteria, she obtained the sensor buoy that continues to measure oxygen levels and thermal stratification in Lake Auburn, data that’s shared with the Auburn Water District. Operating the buoy requires a collaboration among Ewing, the Auburn Water District, and Lewiston Water Division, and all parties have an interest in the data. 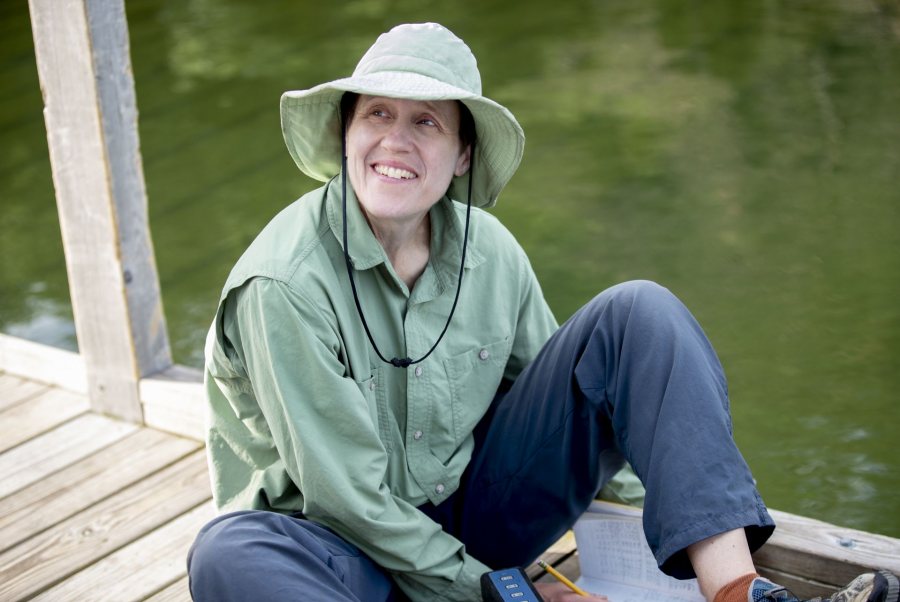 Holly Ewing describes her role in the new NSF grant as “trying to help identify how the technology can best be used in the service of the science itself.” (Phyllis Graber Jensen/Bates College)

An objective of the autonomous vehicles in the new cyanobacterial project is to both expand sampling capacity, in terms of both time and especially space, and also help direct monitoring resources where they’re most needed.

For example, the team will test drones equipped with special cameras that can conceivably, in effect, “see” where blooms are occurring, and thus where additional sampling might be wanted.

“It’s very time- and money-intensive to monitor, and yet monitoring data are what tell us how the system is functioning,” Ewing says. “To the extent that we can better identify how the system functions, we can become more targeted in the way we monitor.”

“Bates undergraduates will come away with experience in how you work in diverse teams.”

The project team hopes that their findings will ultimately translate into technology and practices useful to the people and organizations who protect the public’s interest in clean waters. Looking locally, Ewing says, “having a better understanding of what drives different events in Lake Auburn would be hugely beneficial to the management of our unfiltered drinking water supply.”

Having conducted preliminary drone imaging tests at the Maine lakes this past summer, the team will begin full-scale testing of robotic sampling technologies next summer.

The NSF grant includes funding for student researchers (as well as a postdoctoral researcher beginning at Bates in the second year of the grant), and Ewing foresees students taking part in water sampling and analysis as well as any aspects of the computational and robotic technology for which they’re suited.

Bates students will be involved in myriad aspects of the NSF project, from field sampling and robotics to communicating with stakeholders, says Holly Ewing.

In addition to valuable hands-on experience, the project will provide profound lessons about the nature of environmental science, especially as it is taught at Bates, where collaboration — with the community and across academic disciplines — is central.

“This project requires understanding of community needs and what’s going on in these watersheds, which is very much socially driven,” Ewing says. “And understanding people’s values with respect to how we pay attention to lakes, how we interact with lakes — there’s definitely a cultural and place-based component to that. And all of this is intimately related to the science.”