Advice from Bates entrepreneurs: Find a need, talk to customers, and get a return

By Emily McConville — Published on November 8, 2019

For Julia Sleeper-Whiting ’08, co-founder and executive director of Tree Street Youth in Lewiston, one word to describe a great entrepreneur is “iterative.” For Google account manager Michelle Pham ’15, it would be “relentless.” For Mbali Ndlovu ’09, founder of activewear brand Lukafit, “persistent.”

Sleeper-Whiting, Pham, and Ndlovu joined an alumni panel discussion on entrepreneurship in Chase Hall on Nov. 4. Chris Barbin ’93, a Bates trustee and founder of several companies, including IT consulting firm Appirio, moderated the discussion, which was hosted by the Center for Purposeful Work. 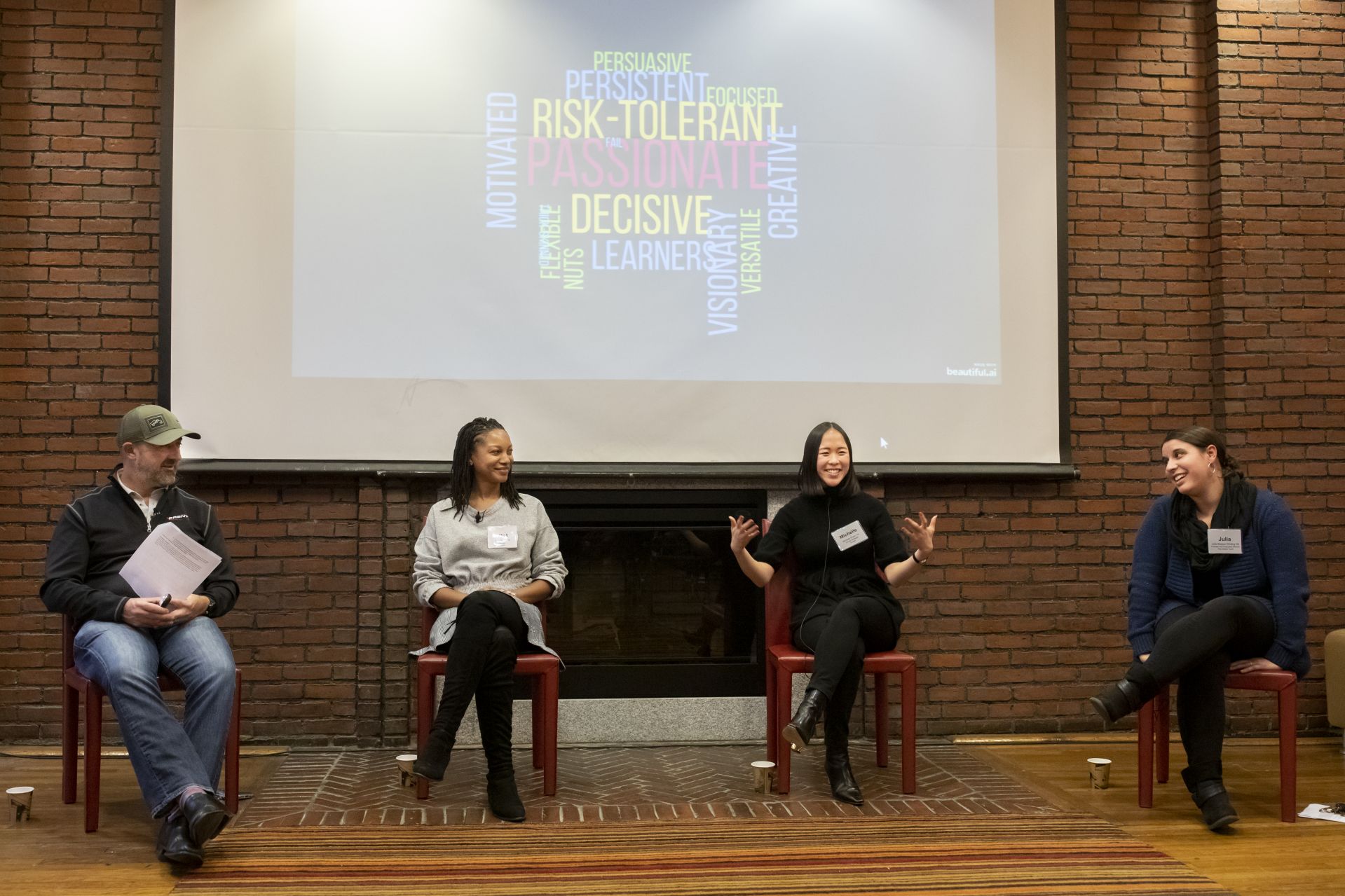 The Center for Purposeful Work hosted a panel on entrepreneurship on Nov. 4. From left: Moderated by trustee and entrepreneur Chris Barbin ’93, panelists Mbali Ndlovu ’09, Michelle Pham ’15, and Julia Sleeper-Whiting ’08 spoke about their experiences and offered advice to students. (Phyllis Graber Jensen/Bates College)

The panel marked the launch of this year’s Bobcat Ventures competition. Over the next several months, the student club will organize a series of workshops on how to design, run, and raise money for a new business, followed by a pitch competition for thousands of dollars in funding.

From their stories of founding their own businesses and working with other founders, Sleeper-Whiting, Pham, and Ndlovu offered plenty of advice and insights for budding Bates entrepreneurs. Here’s what we learned.

Sleeper-Whiting never expected to start a business. She came to Bates wanting to be a veterinarian, but what she called an “epic fail” in a chemistry course left her searching for other paths.

Her sister, Anna Sleeper Cressey ’05, suggested she take an education course. For the accompanying placement in a school, Sleeper-Whiting helped out in an English language learning classroom at Lewiston Middle School. 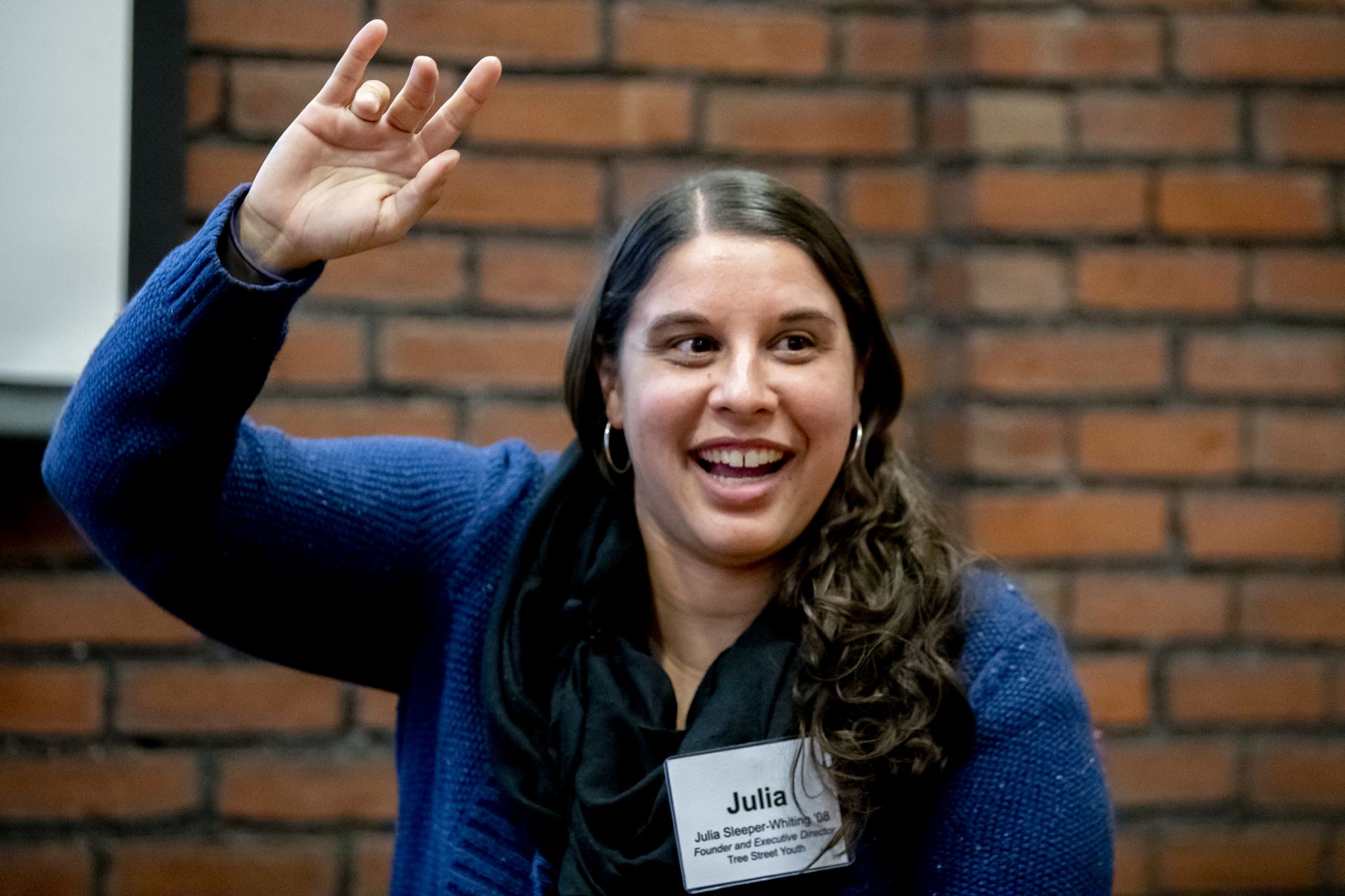 After that, “Bates was my extracurricular,” Sleeper-Whiting joked. “I was off campus way more than I was on campus.”

She continued to tutor students, recruiting her friends to help. She started a homework help program at a local church, and when participants exceeded capacity, she and Kim Sullivan ’13, who volunteered for the program, founded the full-fledged Tree Street Youth Center, which serves primarily immigrant and refugee families in downtown Lewiston’s so-called Tree Streets neighborhood, named for streets like Oak, Walnut, and Birch.

“We didn’t come into it thinking we were going to start a business or that we needed to think of budgets,” Sleeper-Whiting said. “It was just, there’s kids who need support, and we’re able to do it. What’s so complicated about it?” 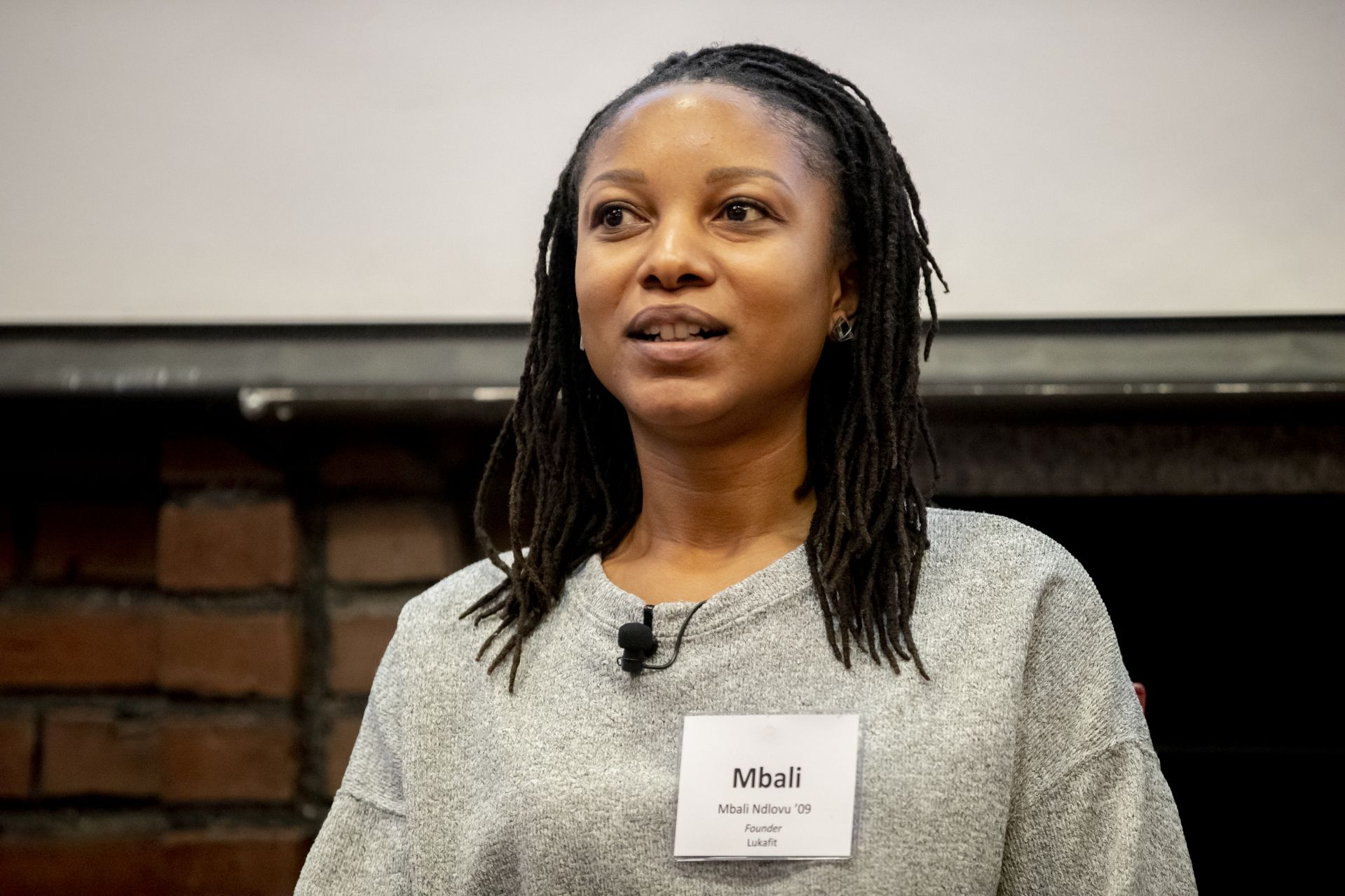 Ndlovu, who majored in African American studies at Bates, always knew she wanted to start a business. But a business doing what, she didn’t know. So after graduation she took jobs at media companies, including Firelight Media, working to increase the representation of people of color in film.

Like many young professionals, Ndlovu tried but failed to establish an exercise routine. That changed when she found people to work out with.

“I started a meetup group for women of color in New York who were also looking for workout buddies,” Ndlovu said. “That grew to almost a thousand women who were looking for the same things I was. Through conversations with all those women, I got inspired to start my company.”

The result is Lukafit, which sells workout gear like leggings and bike shorts designed for women of color.

Be comfortable with ambiguity

As a Bates student, Pham was a sociology major and founding leader of the Bobcat Ventures competition. Now she invests in and consults for the companies of friends, and in her role at Google she’s worked with company founders in fields ranging from healthcare to online mattress sales to develop advertising plans on the search engine. 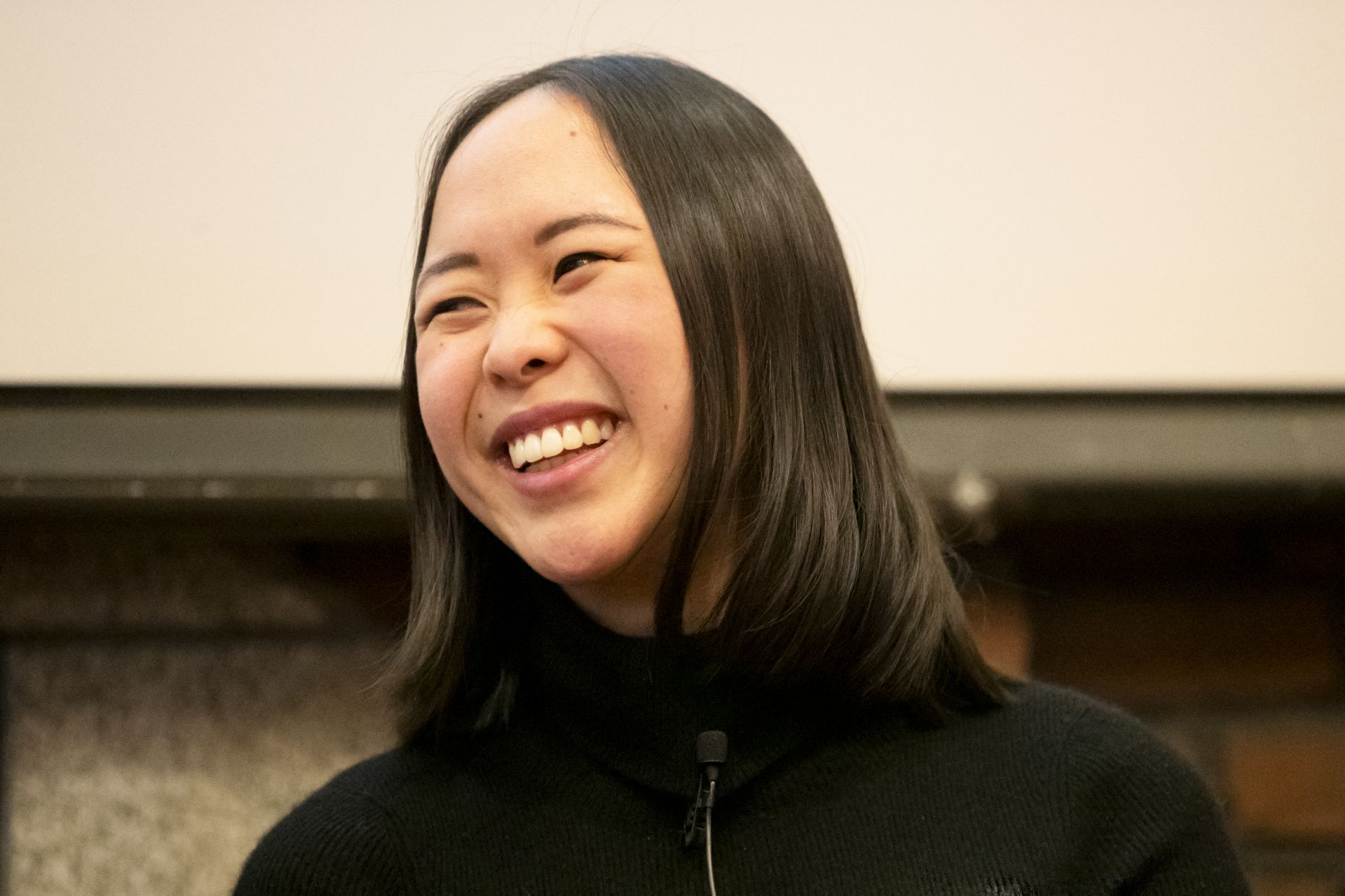 Ambiguity is a fact of life for entrepreneurs and many young professionals, Pham said. Departments at Google are frequently reshuffled, merged, or split.

“You can never get too comfortable, because the next day you might be working under a new director or under a new business unit with new goals completely,” she said.

Let the customers guide you

“I’m always trying to learn how I can improve, with ideas directly from the customers,” Ndlovu said.

Talking to customers is what an entrepreneur should do before anything else, she added, referring to Giff Constable’s book Talking to Humans, a guide for conducting customer development interviews.

Though she runs a very different organization, Sleeper-Whiting’s clients — the children and families of Tree Street Youth — are at the center of her model. “Nothing beats directly talking to your clients, talking directly to the people most impacted,” she said.

Since Sleeper-Whiting is not from the Tree Streets neighborhood, she developed a vision for the youth center by listening to children and their families. “Tree Street became an incubator for the kids’ ideas. You could have a really bold youth emerge who says, ‘I want to do X, Y, and Z.’ You’re like, ‘Okay, what can we do with that?’’’ 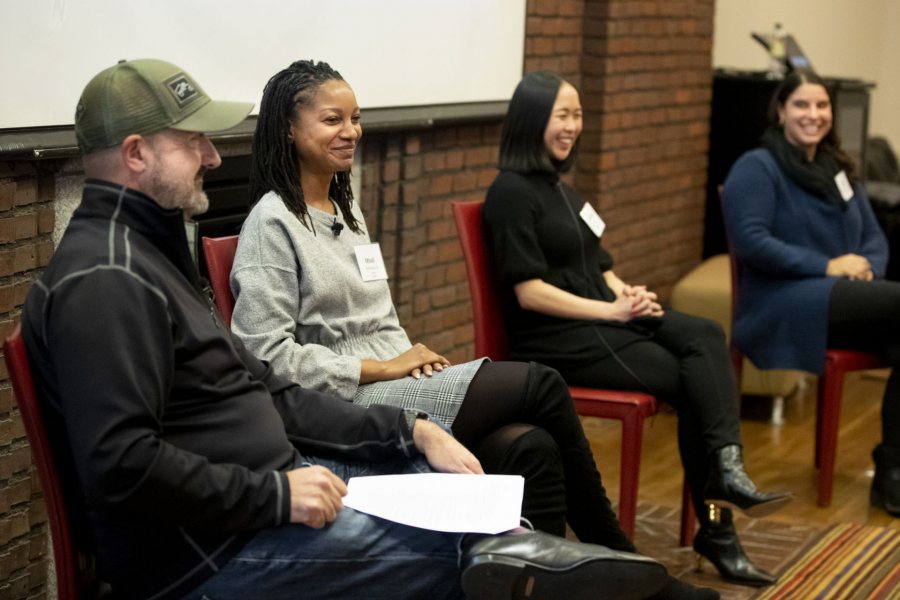 For the panelists, the process of running a business and the relationships you build along the way are as important as the end goal. (Phyllis Graber Jensen/Bates College)

Since founding Lukafit, Ndlovu has joined a community of “peer mentors,” fellow entrepreneurs who talk regularly to share ideas, resources, and emotional support.

“Entrepreneurship is very hard emotionally, financially, and socially,” she said. “You don’t hang out with your friends and family as much, so it can be very taxing on you, and it’s very important to have support. My peer mentors have been that support for me.”

At Bates, Pham said, it’s easy to take for granted the number of “interesting people” who visit campus. But after college, “nobody’s going to curate those events for you anymore.”

So, working at Google in California and then in New York City, Pham has made an effort to go to talks on her own, often sitting in small audiences to hear business giants like Charles R. Schwab speak. In turn, she invites people with interesting ideas to give talks to Google employees.

“You need to keep that curiosity going,” she said. 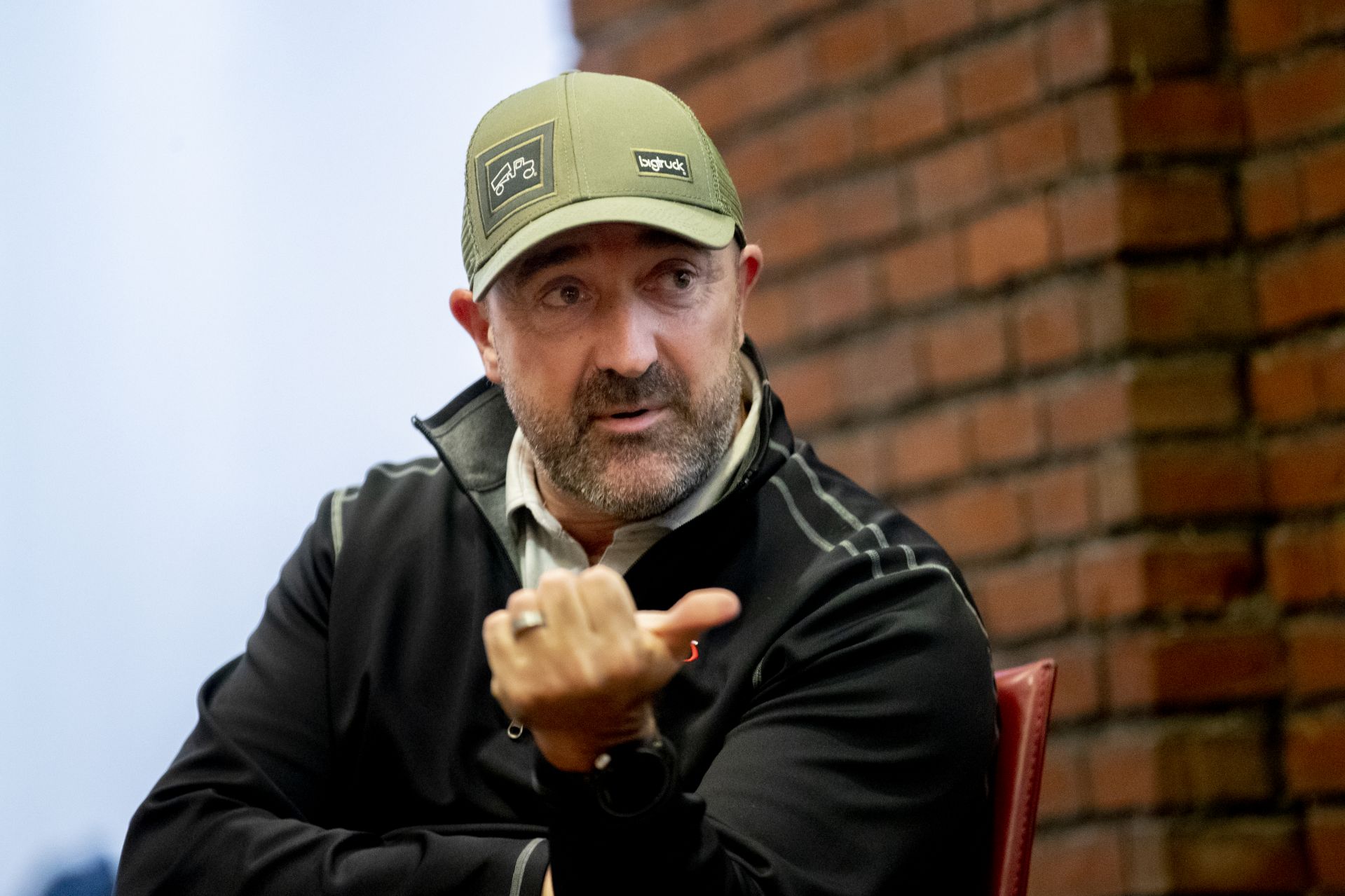 Chris Barbin ’93, whose startup Appirio sold for $500 million in 2016, recommended being comfortable with rejection and making sure employees are happy — and always making sure an investment is worth it. (Phyllis Graber Jensen/Bates College)

Chris Barbin has founded four companies so far; his first, IT firm Appirio, sold for $500 million in 2016, after being fueled by several rounds of investor funding.

If an entrepreneur is lucky enough that an investor takes interest — investors and venture capitalists passed on Appirio 21 times, Barbin said — the founder should then move heaven and earth to make the investment worth it.

“I will never not get a return for my investors,” Barbin said. “It is very important to me that if I take their money, they will get a better return than putting money in a safe.”

What happens when you fail? Barbin asked the panelists.

“I don’t fail,” Sleeper-Whiting replied, to audience laughter. She wasn’t joking. “If something’s not working, then you change it. Then you don’t fail, because you’re constantly evolving.”

“The greatest failure that some people have is that when they recognize that something’s not working, they’re too afraid to say that and pivot,” she added.

That pivot isn’t always easy. Sleeper-Whiting recalled Tree Street Youth’s recent move to a new building. Though the new space is nicer, “we lost a lot in moving away from our old building because there’s a lot of history and dynamic to that,” she said.

“We had to intentionally create space to grieve that loss in order to be able to embrace what we can do with this new building.” 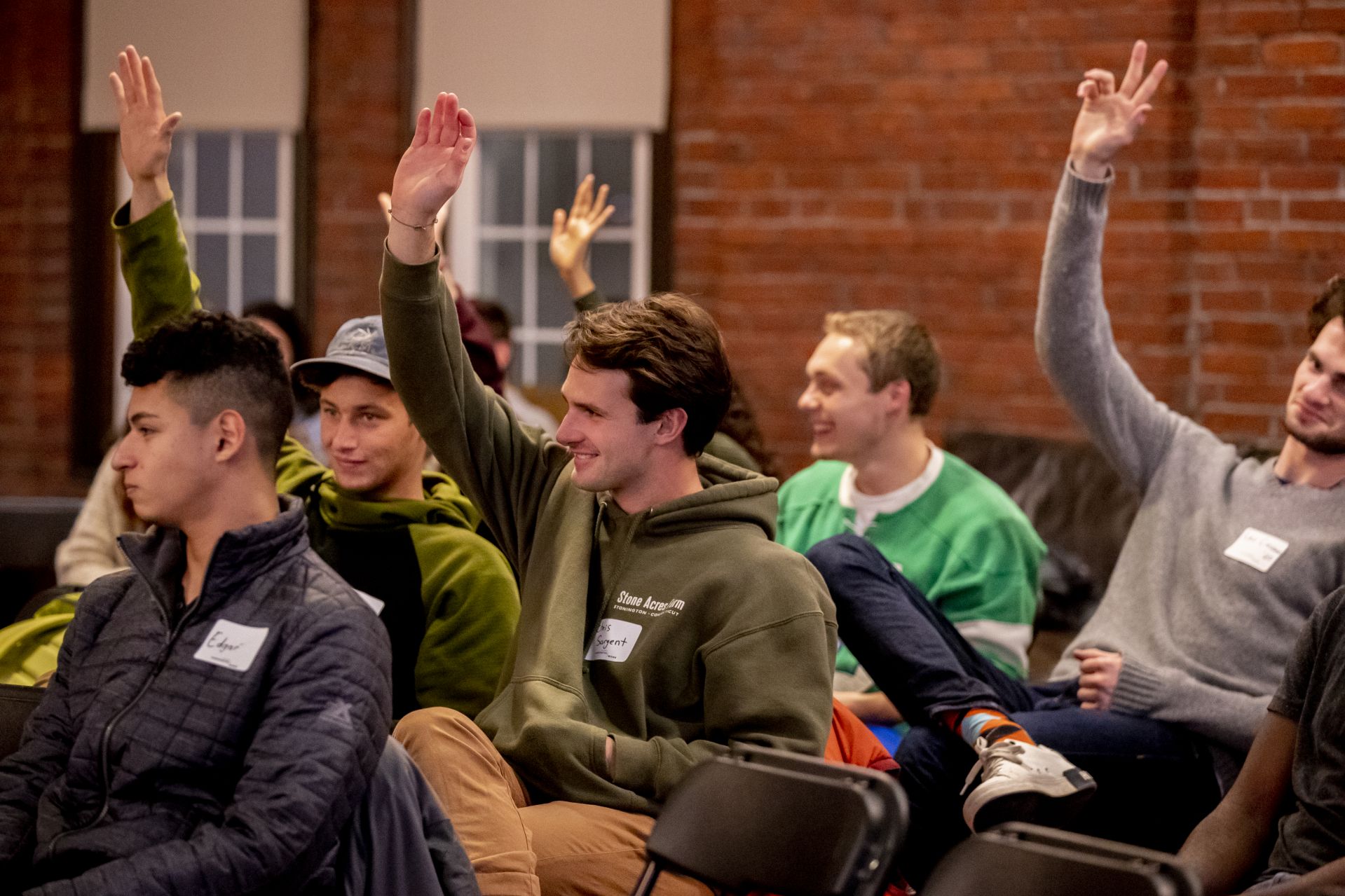 Students attending the Nov. 4 entrepreneurship panel discussion in Chase Hall Lounge asked about the panelists’ challenges and rewards, the importance of building relationships, and how to balance raising money from investors and making a profit on the product itself. (Phyllis Graber Jensen/Bates College)

One student in the audience asked whether the panelists preferred to focus on the process of running a business or the organization’s end goal.

“You have to work toward something,” Sleeper-Whiting acknowledged, “but I would say it’s process, not perfection. If you’re trying to get it right, at least in my field, you’ll die trying, because you’ll not get there. You’re working with lives, and it’s messy.”

Sleeper-Whiting said she sometimes craves a clear ending. She’ll go on construction jobs with her husband to help him paint, because the job has an end point. She’ll work on financial paperwork for Tree Street Youth “because it gets finished.”

But even when a goal is clear — like Tree Street Youth’s recently completed $2.4 million capital campaign — attention to the means is essential. “We constantly had to iterate to reach that goal,” she said.

Creating relationships is part of reaching any goal, “and those relationships aren’t going to go away once you get to that end goal,” Pham said. “You still need to maintain them to get to the next new goal.”

Relationship-building once saved Ndlovu from a supply-chain disaster. She recently expanded the number of activewear designs Lukafit offered and took pre-orders, not realizing that the factory she used required a minimum order for each design that was higher than the number of items she’d actually sold.

“That was one of my biggest learning curves,” she said, “but because of the relationship I had built with a specific sales rep, she was able to negotiate down for me.” 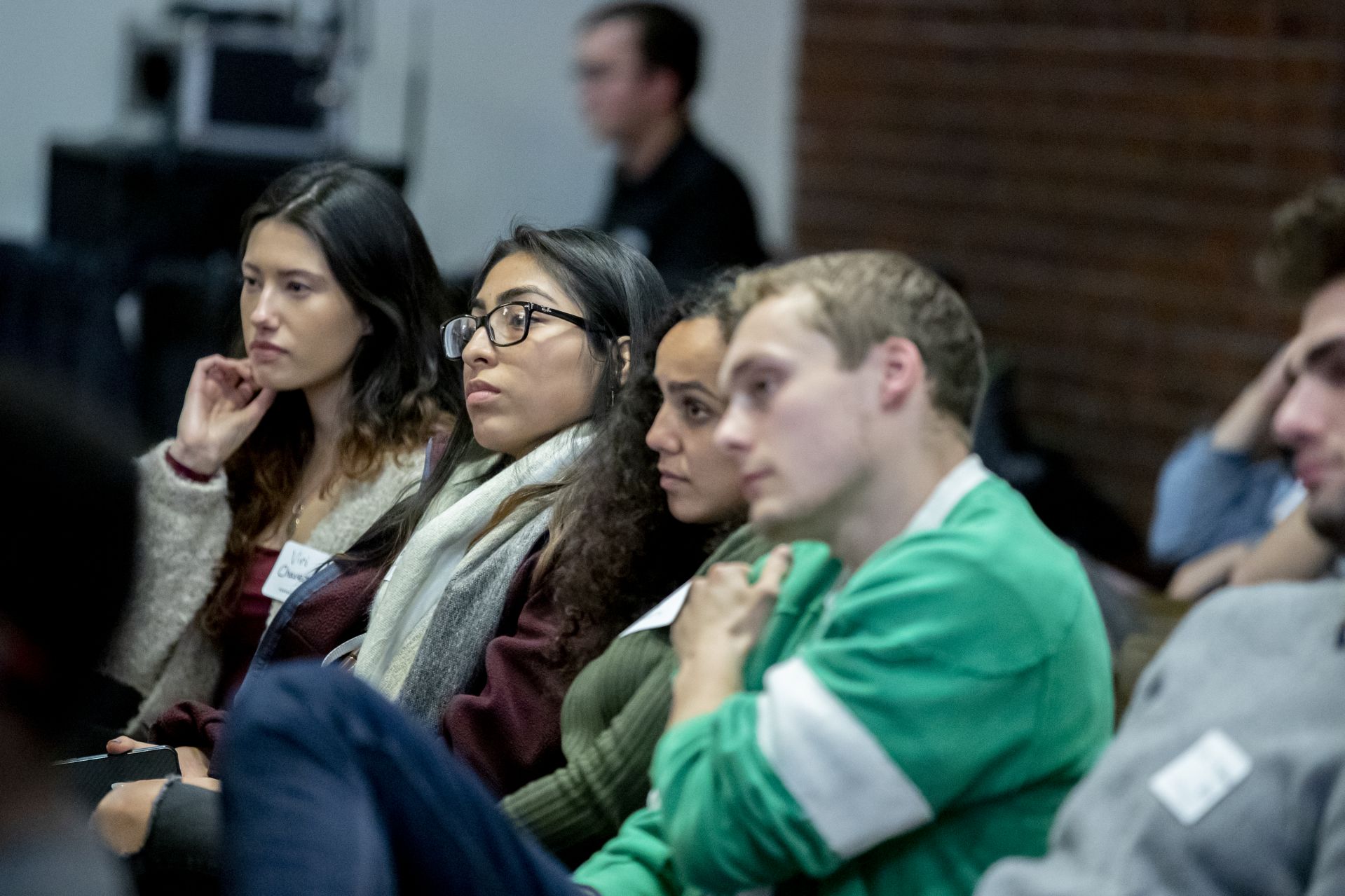 The Nov. 4 panel discussion kicked off this year’s edition of Bobcat Ventures, a student-run series of workshops culminating in a pitch competition to fund student businesses. (Phyllis Graber Jensen/Bates College)

Sleeper-Whiting encouraged budding entrepreneurs to think about more than just profit. “There are a lot of social ventures right now that are combining product creation with providing for a community need,” she said. “Those stand out in today’s society.”

Pham agreed. Social impact is what millennials “care about, more than other generations,” she said.

“How are those products being made? Is there a social component?”