By Emily McConville. Published on November 22, 2019

A variety of news organizations reported the invention at Bates of Bobcat339, a molecule created by students that could have implications for research and treatment of cancer and Alzheimer’s disease.

Assistant Professor of Chemistry and Biochemistry Andrew Kennedy and seven students co-authored a paper describing the molecule, which inhibits the ability of a certain enzyme to regulate genes. This class of so-called TET inhibitors could one day limit the aggressiveness of cancers. 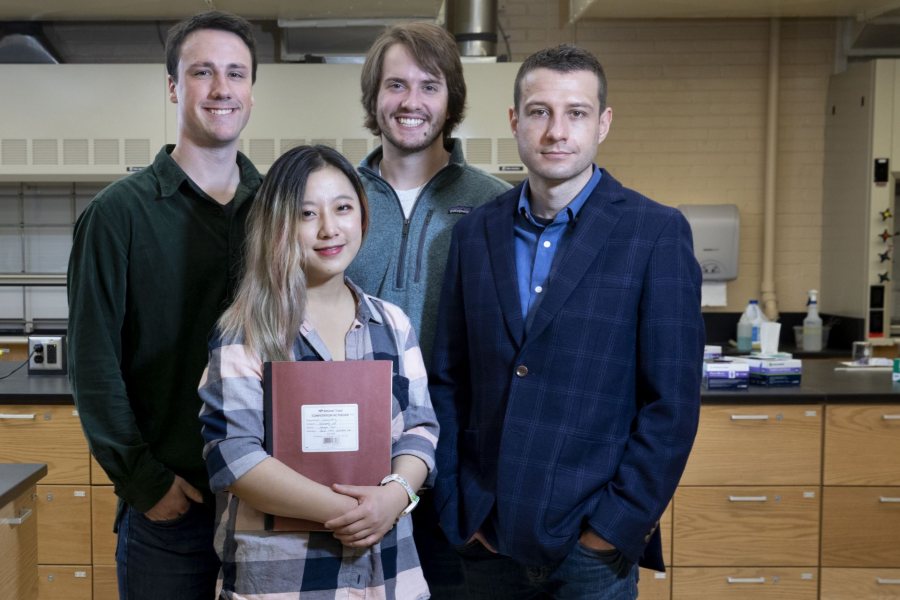 With their professor, Andrew Kennedy (right), three of the seven student coauthors of the scholarly article describing Bobcat339 posed last May in a Dana Chemistry lab: from left, Michael Bennett, Haoyu Sun, and Nathanael Kuzio, all ’19. (Phyllis Graber Jensen/Bates College)

Gabrielle Chua ’18 was the student who ultimately structured the molecule.

Steve Collins of the Sun Journal reported that the college will receive $842,000 of a $6 million National Science Foundation grant to figure out how to track and predict cyanobacterial blooms in lakes.

Holly Ewing, professor of environmental studies and the Christian A. Johnson Professor of Interdisciplinary Studies, is key to the investigation, which is led by Alberto Quattrini Li of Dartmouth College.

The multi-institution, multidisciplinary team will use boats and aerial drones to collect a wide variety of data on several lakes, including Lake Auburn. The project requires understanding communities’ relationships with their lakes, Ewing said.

“Understanding people’s values with respect to how we pay attention to lakes, how we interact with lakes — there’s definitely a cultural and place-based component to that,” she said. “And all of this is intimately related to the science.”

Bates staff member Ryan Smith talked to the Lewiston Sun Journal’s Adam Robinson about his victory in the Hartford Marathon in October, which qualifies him for the U.S. Olympic Team marathon trials.

Smith, manager of purchasing, accounting, and licensing for Bates Information and Library Services, ran the marathon in 2 hours and 18 minutes.

He’s now headed to Atlanta for the Feb. 29 trials, where he hopes to break the top 50 (the top three in each gender make the Olympic team).

“I’m certainly excited to see the full-time professionals, as always,” Smith said. “In terms of nerves, I think the pressure of trying to qualify is much more nerve-wracking than actually competing there. I’m just going to try and beat as many people as possible.

“That sounds more fun than nerve-wracking, especially because it’s a hilly course and I’m really good on hills.”

The University of Cape Town announced that Nolwazi Nosisa Ngwenyama ’16, a Bates graduate and graduate student in gender studies, has won a prestigious Mandela-Rhodes scholarship. 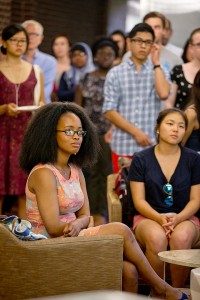 Nolwazi Ngwenyama ’16 listens to a speaker at the Office of Intercultural Education at Bates in 2014. (Phyllis Graber Jensen/Bates College)

The scholarships are awarded to African citizens with “exceptional leadership capacity” and provide funding for postgraduate study in South Africa.

Ngwenyama triple-majored in politics, anthropology, and women and gender studies at Bates. A native of Eswatini, she volunteers with the United World Colleges Eswatini National Committee.

In the HuffPost, Professor of Gender and Sexuality Studies Rebecca Herzig helped guest writer Sofia Barrett-Ibarria round out her argument that while choosing not to remove body hair might be a “feminist” choice, body hair is more complicated than a “to shave or not to shave” binary. 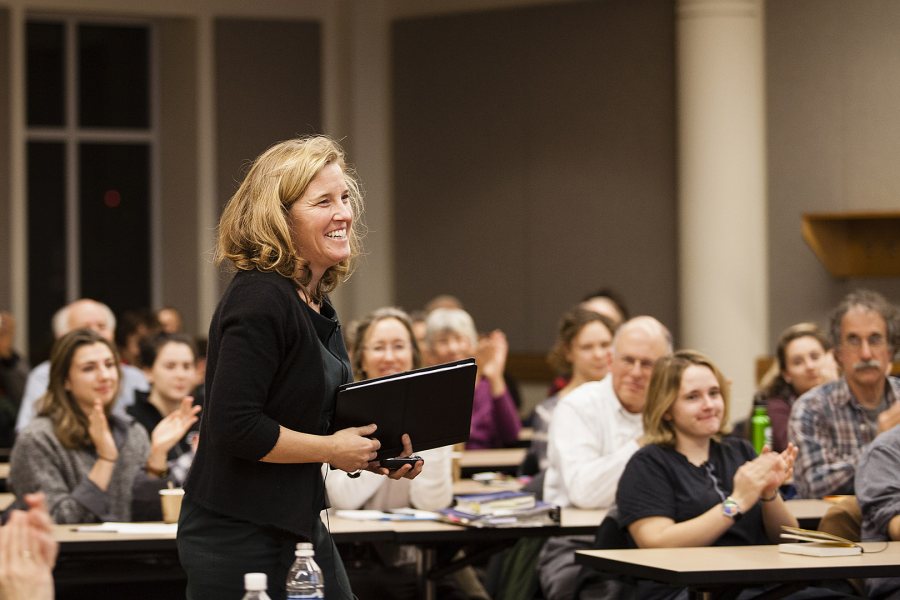 In 2014, Rebecca Herzig heads to the lectern to deliver a talk. (Sarah Crosby/Bates College)

Herzig is the author of Plucked: A History of Hair Removal. In the HuffPost, she pointed out that while there is some mainstream acceptance of body hair on women, the stigma around body hair can have real, negative consequences, especially for women who are not “able-bodied, white, young, thin and toned, expensively dressed, etc. — in every other way,” she told Barrett-Ibarria.

It’s a phenomenon that baffles and frustrates basketball fans: flopping. And from a science perspective, Peter Weyand ’83, a professor of applied physiology and biomechanics at Southern Methodist University, knows more about it than almost anyone, writes The Guardian’s Patrick Hruby.

Funded by Houston Rockets owner Mark Cuban, Weyand and his team set out in 2014 to measure how much force it takes to knock someone over and what it looks like when a basketball player is genuinely set off balance, vs. embellishing a light hit or straight-up faking a foul — that is, flopping. They ran tests using first a dummy, then real people wearing heavy padding.

Turns out, it doesn’t take much force to knock someone over. “In many cases, if the defender just doesn’t move their feet, then down they go,” Weyand said. “I’ve been through thousands of charge-block collisions, and never realized how easy it was.”

A rather obvious indication of a flop, the SMU team found, is when players stick their arms straight up as they go down — that doesn’t happen naturally.

The program quotes Renee Leduc ’98 on how a recent Federal Communications Commission action could harm meteorologists’ ability to forecast the weather, including dangerous hurricanes.

The issue has to do with an FCC decision to auction off specific wireless radio frequencies to commercial wireless providers for next-generation 5G networks.

The scientific community, including Leduc, opposes the move. They say that giving these frequencies to 5G networks will interfere with unique measurements from weather satellites that are very important to weather forecasting models, the two most well-known being the American model (GFS) and the European model (the ECMWF). The FCC says the interference is not a threat.

Renee Leduc is quoted in this BBC Click story about how turning over specific radio frequencies to wireless providers could harm weather forecasting.

Founder and principal of the consulting firm Narayan Strategy, Leduc is a member of the American Meteorological Society’s Board on Enterprise Economic Development and its International Affairs and Radio Frequency Allocation committees.

She told The Washington Post that it’s “crucial” that the question of interference is “decided in a way that is informed by atmospheric science since the measurements are so crucial to sound weather predictions.”

The issue is front and center at the World Radiocommunications Conference, which ends Nov. 22 and where “for the past month they have been working to coordinate the deployment of 5G technologies across the world,” Leduc tells BatesNews.

Down East arts journalist Nan Lincoln spoke with author Carrie Jones ’93 about her new young-adult thriller, In the Woods.

The novel, co-written with Steven E. Wedel, follows a teenage girl as she investigates possibly paranormal events. The two writers’ conversation, however, ventured into Jones’ other projects, from the children’s book festival she helped organize to her prolific books and blogs.

“I have to write — all the time,” Jones said. “If I don’t get my ideas onto the page they pile up. But I love seeing where my characters will take me. It’s always a new adventure.” 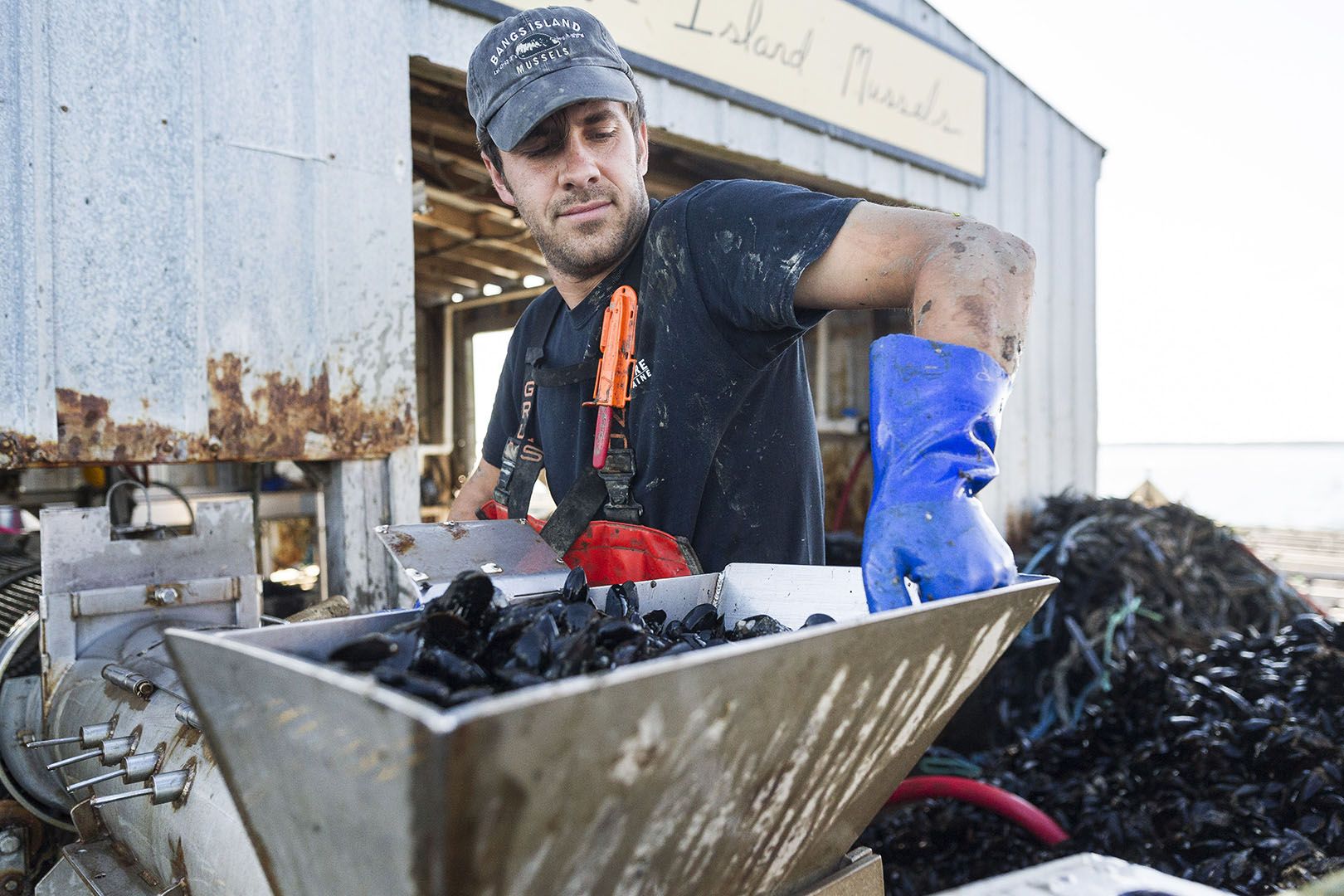 In 2016, Matt Moretti ’06 feeds mussels into a machine that works to break apart tissue connecting many of the clusters. (Josh Kuckens/Bates College)

The company produces mussels by growing them on ropes suspended from rafts, selling the product to Portland restaurants as well as wholesalers. The key to sustainable mussel farming, Moretti told PPH reporter Peter McGuire, is scale, and with the new acquisition Bangs Island Mussels can double its production and workforce.

“The economics of it are such that the faster you can add on volume to your production, the sooner your costs drop and profits go up,” he said.

With bestselling author Elizabeth Strout ’77 sitting next to her, Oprah Winfrey announced on CBS This Morning that Strout’s new novel, Olive, Again, is her new book club selection.

Winfrey said she admires Strout’s ability to take “the simplest of things and turn them into something that feels real to us.”

Oprah Winfrey talks with Elizabeth Strout ’77 on CBS This Morning.

Women Of The C-Suite: “Fear is a liar; fear will tell you the craziest things” with Melissa Wong, CEO of Retail Zipline — Authority Magazine

Building a company, Wong said, requires fearlessness — even when you think you should be afraid.

“Fear is a liar,” she said. “Fear will tell you the craziest things. When I first started, I legitimately feared our company would fail. … When you’re in the moment, don’t let feelings of fear lead your actions or choices.”

Working in communications for Old Navy showed Wong how hard it is for large retail brands to get their own stores to implement ideas. So she and a co-founder started Retail Zipline, which streamlines that kind of communication.