For students on campus, ‘it’s all about the comfort food’

Every day Mathieu Moutou ’22 of Vacoas, Mauritius, makes trips to the Bobcat Den to pick up lunch and dinner, as well as something from a copious spread on the snack table Dining Services has set up for the students who have been living on campus during the COVID-19 crisis.

It’s all been timed so he doesn’t have to spend more than five minutes in the building. He orders online and then gets a notification that the food is ready for pickup. There’s no contact, but the staff are there.

And most days those quick exchanges with the people who are cooking and packing to go containers at the Den represent his only in-person interactions, other than with the students in his dorm (all at a safe social distance).

“They are so kind,” says Moutou, a double major in math and music. “I don’t even have to tell them my name anymore since they’ve come to know who I am. They know I eat a lot so sometimes they give me extras and leftovers.” 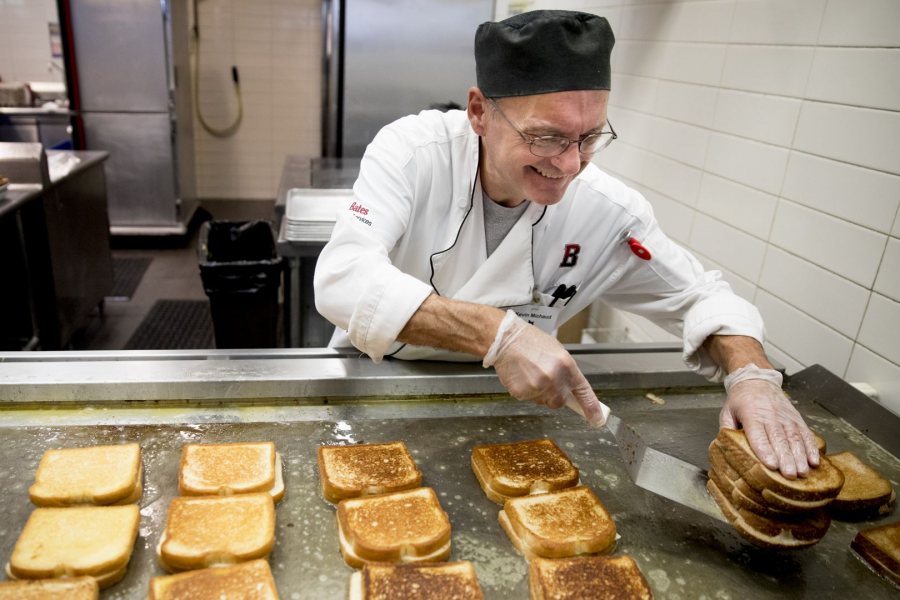 It’s undeniably lonely for the approximately 80 students who petitioned to remain on campus for various reasons, including not being able to travel to their home countries and, for some seniors, thesis work that could not be done remotely.

They’re on campus, but one that’s mostly empty (since March 17, most Bates faculty and staff have been working from home, except for essential personnel.)

Still, some things haven’t changed for students on campus. “Bates people care. They reach out to me individually and are just like, ‘How are you doing?’” says Alexis Fifield ’21 of Guatemala City, Guatemala, who has also been in residence.

“How things are done and what is provided to us has changed, but that sense of ‘We’re here for you, and you’re here for us,’ that mutual feeling of ‘We want to do this together,’ hasn’t changed.”

Even if there are fewer of them, “what makes Bates, Bates, are the people,” says Moutou, who can’t return to his home in Mauritius. The Indian Ocean island nation near Madagascar, which has reported 332 COVID-19 cases total, shut down outside access in March. “My country closed its borders indefinitely,” Moutou says. “I don’t have anywhere else to go.”

“The eggamuffin. They were so excited about that.”

No wonder familiar foods from Bates Dining Services are what he and others crave. “What we have found is that it’s all about the comfort food,” says Christine Schwartz, assistant vice president for dining, conferences, and campus events.

When students place their orders online, they are very specific about their cravings. “They ask, can we include their favorite dishes, like General Tso’s chicken and the taco bar. They like chimichanga and lemon chicken.” An English muffin with egg was a big hit, Schwartz says. “The eggamuffin. They were so excited about that.”

When Schwartz and Cheryl Lacey, director of dining services, started planning for ways to feed the Bates students who would remain on campus, they understood that they’d have to supply comfort on multiple levels.

As Moutou points out, the students see their professors on Zoom and such, but the dining staff are their main in-person contact — albeit from a safe social distance — with the world outside their dorm. “Besides Security, we are probably going to be the only people they are going to see on campus,” Schwartz says. 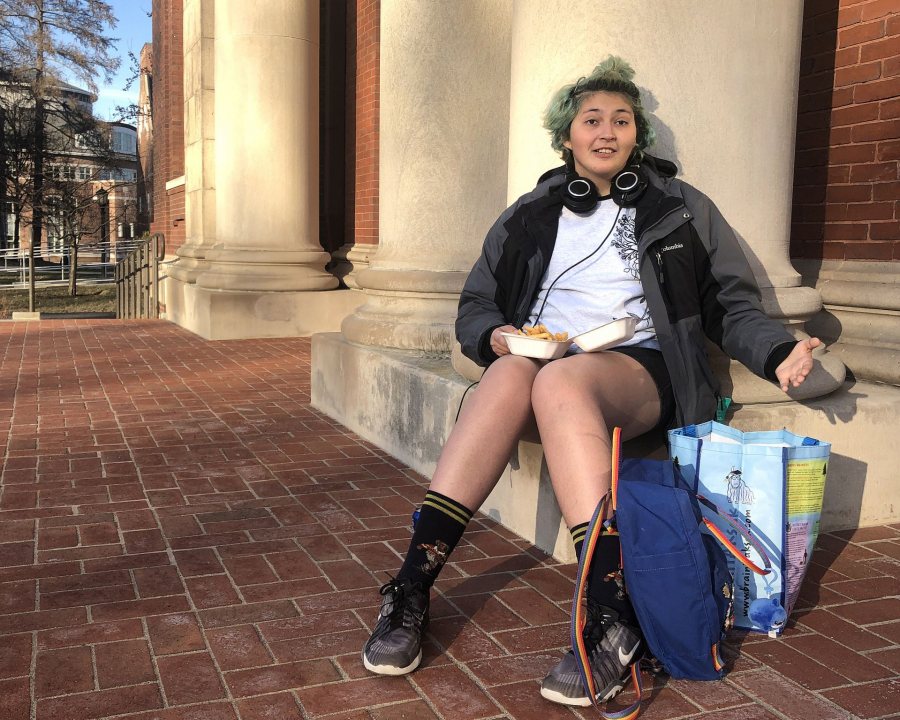 “I like just taking time to sit out here and get some fresh air,” says Alexis Fifield ’21 of Guatemala City, Guatemala, as she finishes dinner, including some Dining Services comfort food: french fries. What hasn’t changed for students on campus is the sense that “Bates people care,” she says. (Jay Burns/Bates College)

“It was a quick turn for us,” she adds. “We were retooling almost hourly to get there while we were maintaining the health and wellness of our own staff.”

They decided deliberately to provide food in two venues, to give students two distinct places to visit, breaking up their days. A continental breakfast is available at Commons and grab-and-go lunches and dinners are prepared and distributed at the Den.

The Dining Services staff working these areas “really connect with the students,” Schwartz said. That includes recognizing who eats what and who is going to be super sad if there are no Oreos on the snack table (actually, two 8-foot tables together). Which turned out to be most of the remaining students, as it turns out. “I tried to get some Lorna Doones and Nutter Butters and some Milanos and they are like, ‘Where are my Oreos?’” Schwartz says.

The staff has also been helping students process as they face a strange situation on campus while also preparing for final exams (going on now through May 2) and trying to stay healthy. Maybe they’ve wanted to complain about coursework, or what they missed, or just how weird all this was.

More comfort food: See the deliciousness of a Bates Bobcat sandwich as it is assembled by Dining Services executive chef Owen Keene. Video by Theophil Syslo.

That definitely happened at first, Schwartz says. But by mid-April, the talk about the weirdness had diminished. The team reached its stride and shifted to an online ordering system to shorten students’ wait times inside the Den. “It has sort of taken on a rhythm of its own.”

The constant has been comfort food, fitting for what has been a chilly spring in Maine, including a 6-inch snowfall on April 10. (On one notably warm, sunny day on campus, the staff saw a sudden increase in requests for sliced fruit and salads, typical for good weather, Schwartz says.)

For the most part, Schwartz says, the remaining students on campus want the classics. There’s the student who ordered chicken nuggets so often that Schwartz wondered if it might be time for a gentle nudge about other food groups.

They want Chicken Patty Satty (“Chicken Patty Saturday,” that is). The taco bar has been established, with takeaway containers of salsa and other add-ons. And they really, really want General Tso’s chicken. (See recipe, in case you too are having a craving.)

Not Moutou. He’s been craving chicken with scallions — although “my favorite snack is, by far, the frozen mac and cheese,” he says. Schwartz confirms that this is one of the most popular snacks to go. When Moutou takes it back to the dorm, it’s just a frozen block of pasta and sauce — but it becomes “a culinary delight ready in four minutes in the microwave.”

The Bates Dining Services version of General Tso’s chicken uses boneless, breaded chicken wings, deep fried, but this “Close to Commons” recipe can be adapted for whatever breaded chicken you have on hand, including frozen chicken tenders that can be cooked on a sheet pan in the oven.

If you’re ambitious and want to make your own fried chicken to start, use a counter-top deep-fat fryer, an air fryer, or fry on the stovetop in a pan deep enough to hold the amount of vegetable oil needed to fry the chicken. (Our only rule is to make sure the chicken is thoroughly cooked to an internal temperature of 165 degrees.)

Serve over rice to soak up the sauce.

Put the chicken in the oven, using instructions on the package or, if you’re frying, into the hot oil.

Cut the carrots into matchsticks and the broccoli into florets. Boil water in a medium-sized pot and when it is at a rolling boil, drop the vegetables in for one minute. After one minute, drain and run cold water over them to stop the cooking process.

Alternatively, you can plunge them into an ice-water bath. The goal is to keep the vegetables a little crisp. Set aside.

In a medium-sized saucepan over medium heat, warm 1 to 2 tablespoons of vegetable oil and stir-fry the garlic and ginger for a minute. Add wine and let it cook off for about a minute.

Add the vegetable stock (chicken will do if you don’t have vegetable stock or bouillon on hand), soy sauce, vinegar, sugar, corn syrup, teriyaki sauce and crushed red pepper to the pan. Bring to a boil.

Meanwhile, mix the cornstarch with 1 1/2 tablespoons of water to make a slurry. When it’s creamy and mixed, add to the boiling sauce. Stir constantly as it thickens.

Taste to check the seasonings and adjust accordingly. If you like spice, you might want more red pepper at this point.

Pour over the cooked chicken and toss to coat, then garnish with the blanched vegetables. At Bates, it’s served over rice.

Slideshow: A year of COVID, from sudden shutdown to hopeful reopening

Video: Vanessa Paolella ’21 and guiding the student newspaper during crisis