“I was welcomed to stand on this person’s land, in his home,” says Grace Ellrodt ’20, describing what it was like to visit, interview, and photograph an elderly Chilean farmer during her semester abroad in 2019.

For Nicole Kumbula ’21, whose program took her to four cities on four continents, studying abroad brought empowerment, the feeling that she could “proudly share where I come from, the places I had been, and where I was going.”

Such are the outcomes of study abroad — helping students realize that spending time in another culture demands gratitude and humility even as it instills pride and self-confidence.

Below are 12 images that were selected for this year’s Barlow Off-Campus Photography Exhibition, including one that Ellrodt took of the Chilean farmer, part of her project looking at loneliness among elderly persons, and Kumbula’s photo of the small Buenos Aires eatery where she gained language skills.

(Usually mounted in Pettengill Hall and comprising dozens of photographs depicting Bates students’ study-abroad experiences, the annual Barlow exhibition was another casualty of the COVID-19 pandemic.) 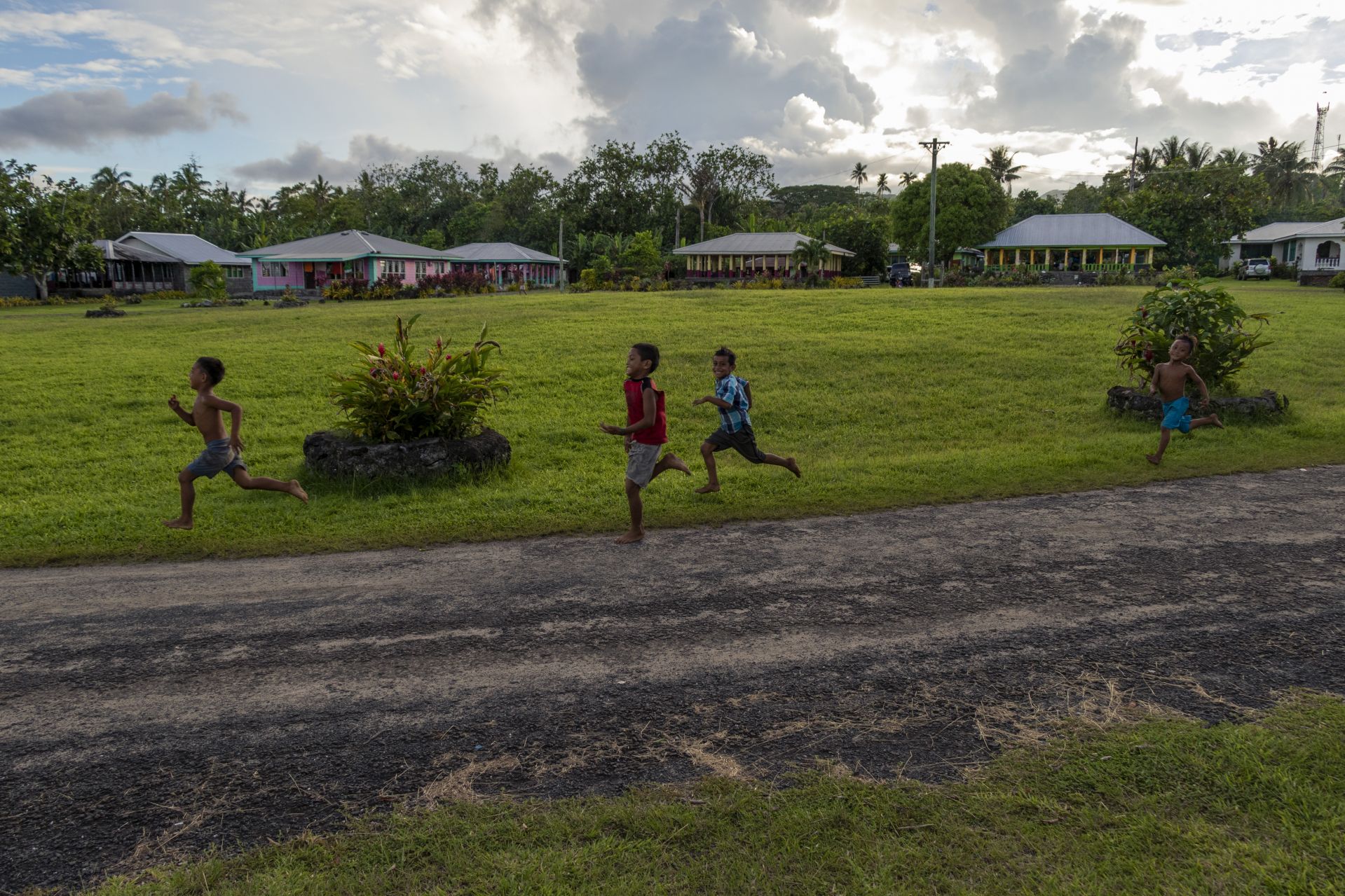 Zoe describes the photograph: Sunset over the Catlins on the South Island of New Zealand. 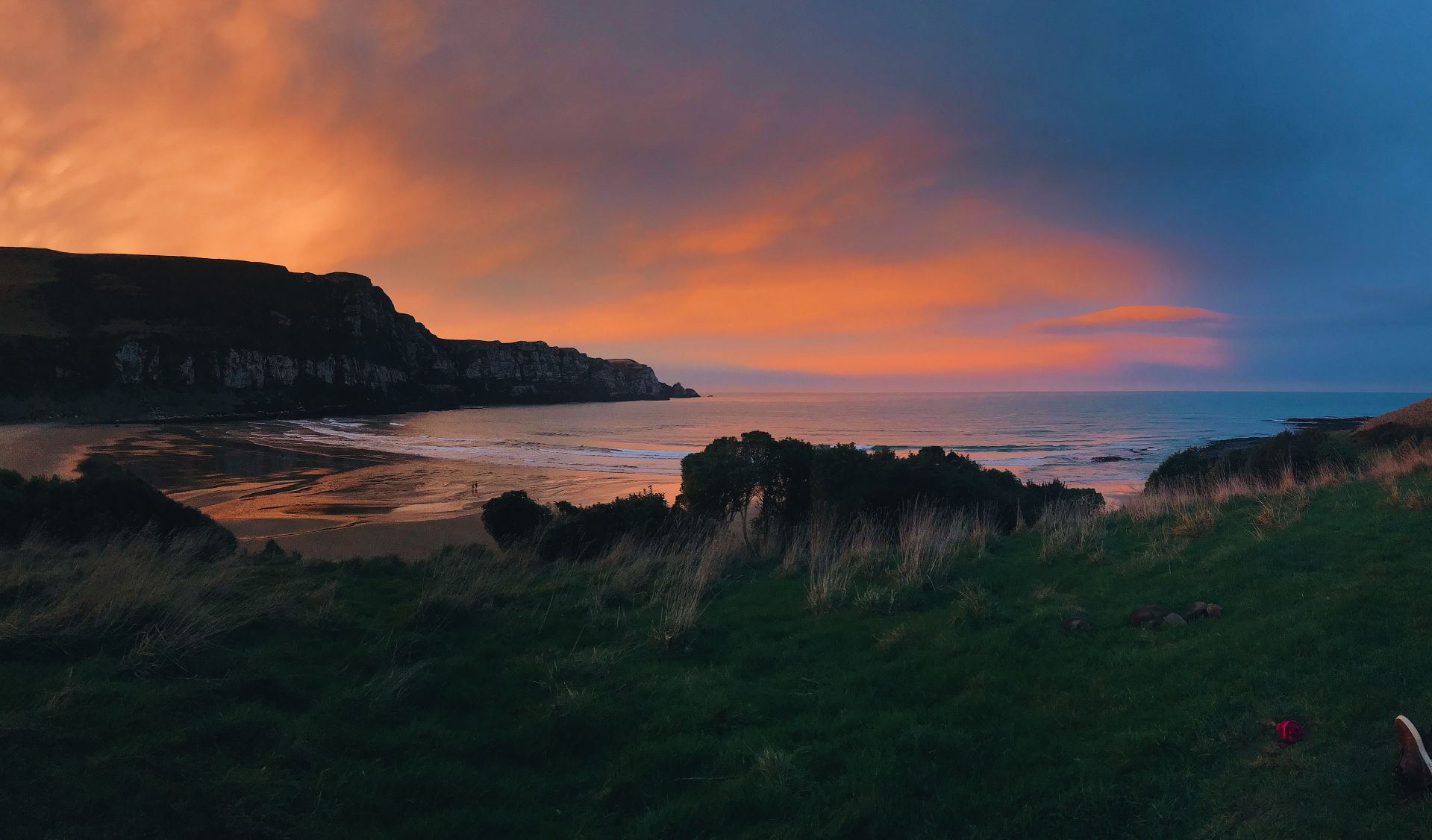 Liz describes the photograph: The young students of the Tibetan Children’s Village Day School in Dharamsala take a break from their studies with a competitive soccer match. While we huddled for shelter from the heavy afternoon thunderstorm, the kids didn’t seem to mind a little rain.

While abroad, I researched the cultural repercussions of language loss in the Himalayas as a result of educational migration. My visits to boarding and day schools in India and Nepal provided foundational understanding of the threat of language endangerment as well as the complexity of Himalayan youth identity.

As an education minor at Bates, I was thrilled with the opportunity to be back in the classroom and working with kids! 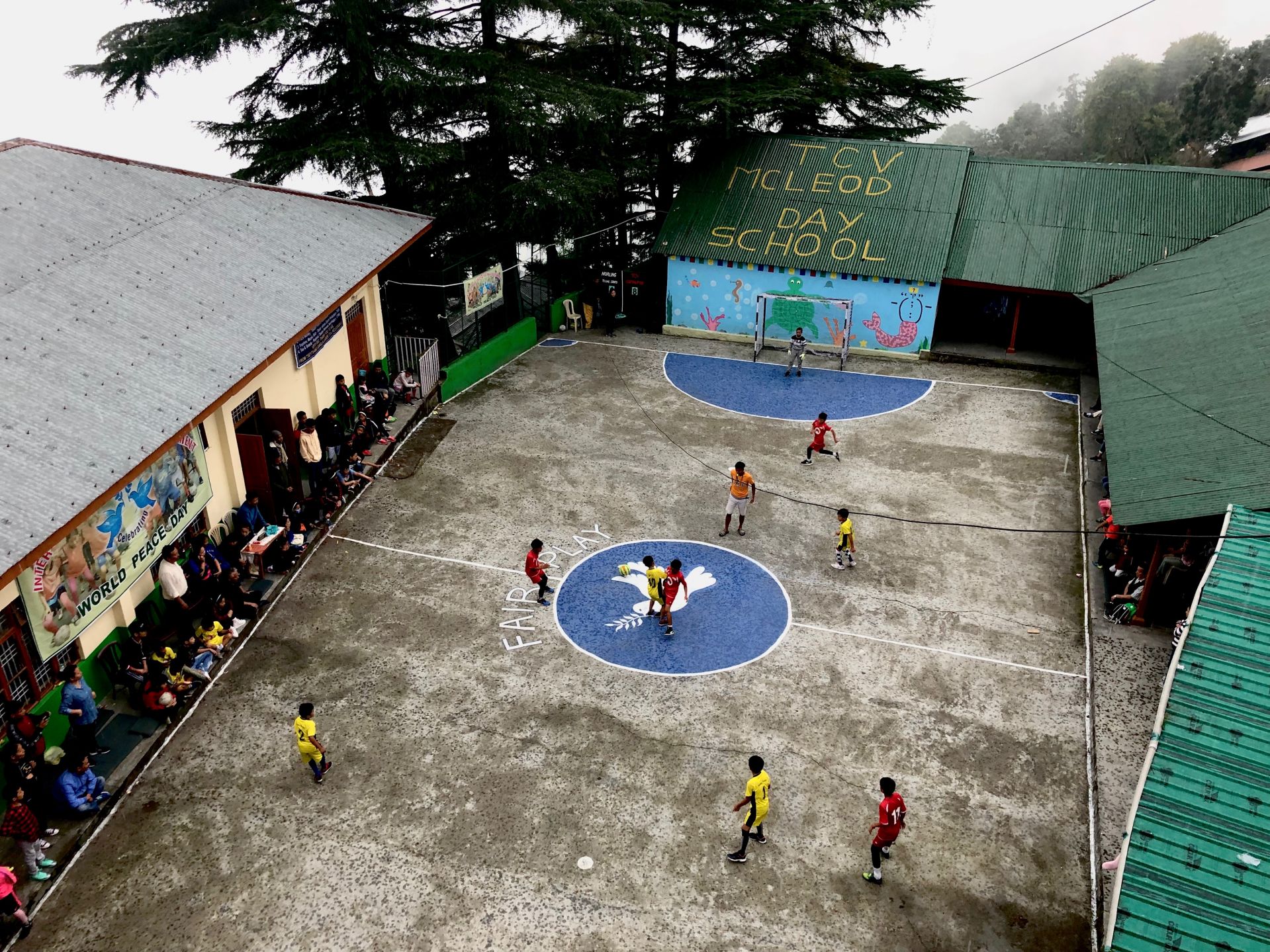 Grace describes the photograph: This is Juan, who lives in Makewe, a primarily Mapuche indigenous community in southern Chile. He is pictured on his farm, where his animals — including this pig — are like his children. I interviewed him and others for The EngAging Project site, my capstone project about a pressing public health issue: loneliness among older adults.

I was welcomed to stand on this person’s land, in his home, to capture an everyday rhythm to him — and an explorative one for me. My study abroad gifted me these exchanges over and over.

Juan is alone while his wife gets medical treatment for three days at a time. His church community and his faith are loneliness antidotes. He told me, “El Creador de arriba, Él es lo que te cuida de la noche. Entonces, uno no puede sentirse demasiado solo.” (“The Creator above is the one who cares for you at night. So, one can’t feel too alone.”) 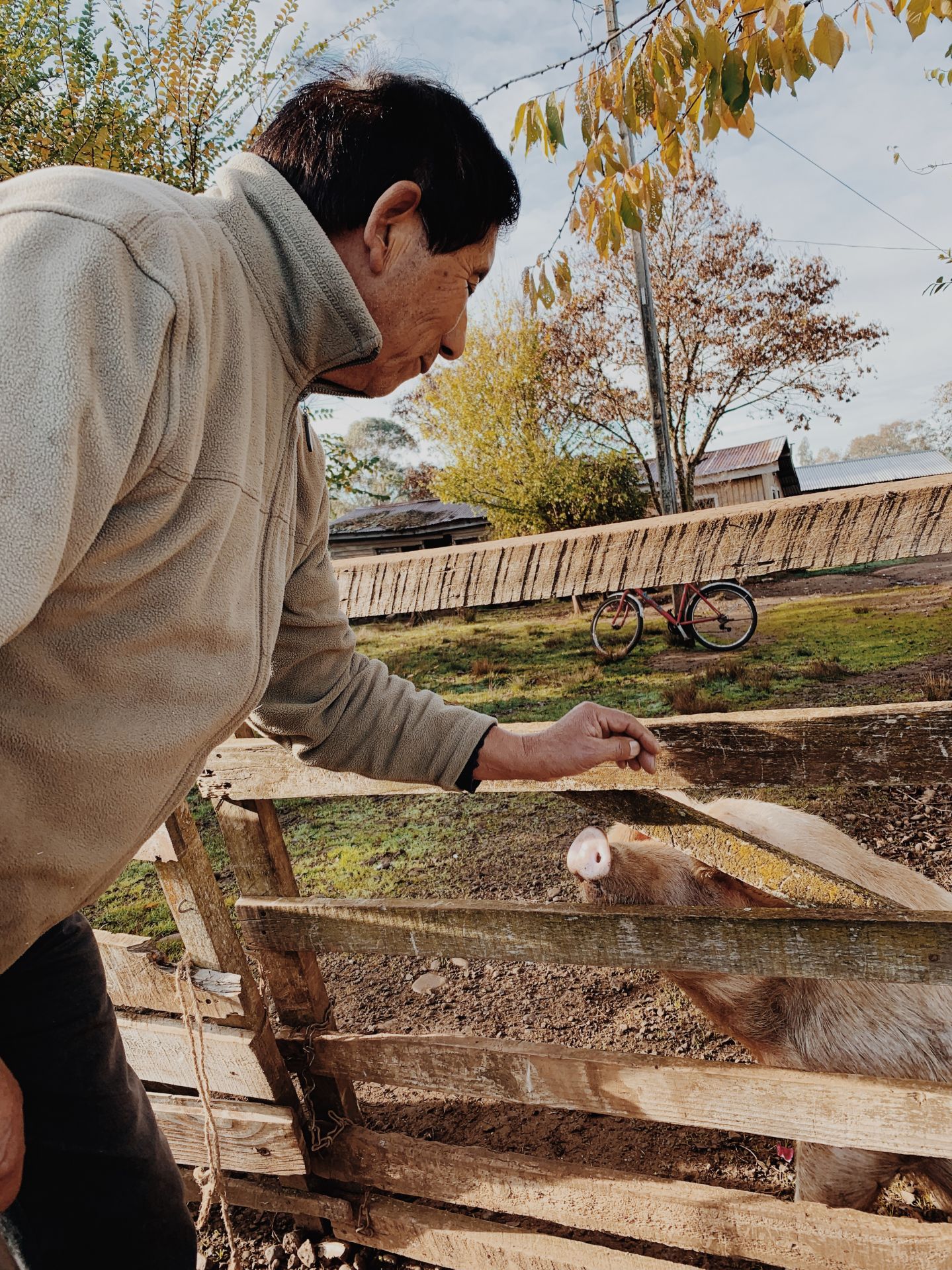 Liz describes the photograph: A new friend made on a misty morning somewhere along the Camino de Santiago trail in Galicia, Spain. 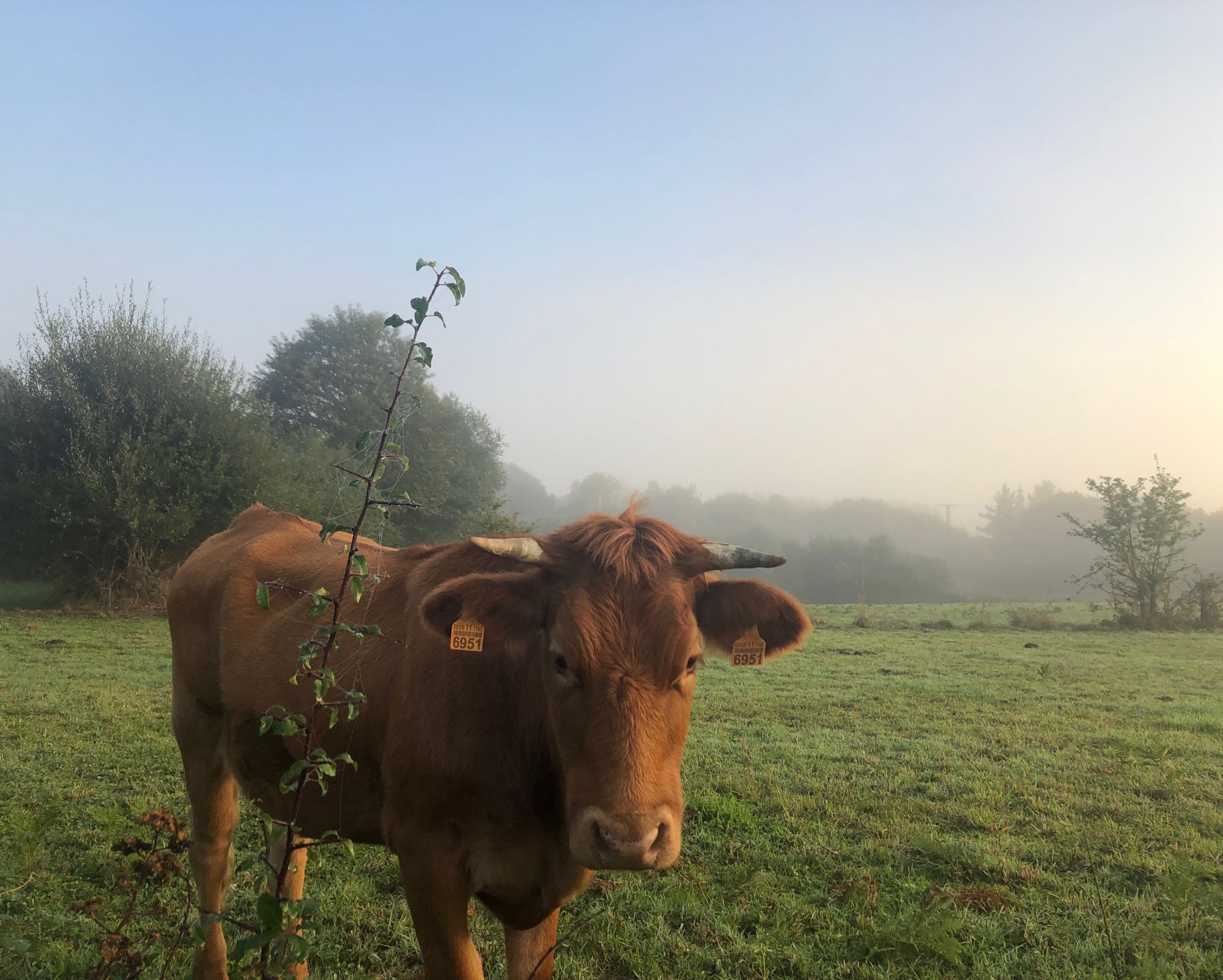 Owen describes the photograph: From under the arch of the Moon Hill, this photo was taken looking out at a town in the distance outside of Yangshuo, China. Behind the town are karst mountains, for which this region is well-known. My roommate and I had zigzagged through town on rented motorbikes about 30 minutes to reach this destination and hike up to the view.

In Yangshuo, I experienced a distinct local culture uniquely separate from the hustle and bustle of China’s mega-cities. 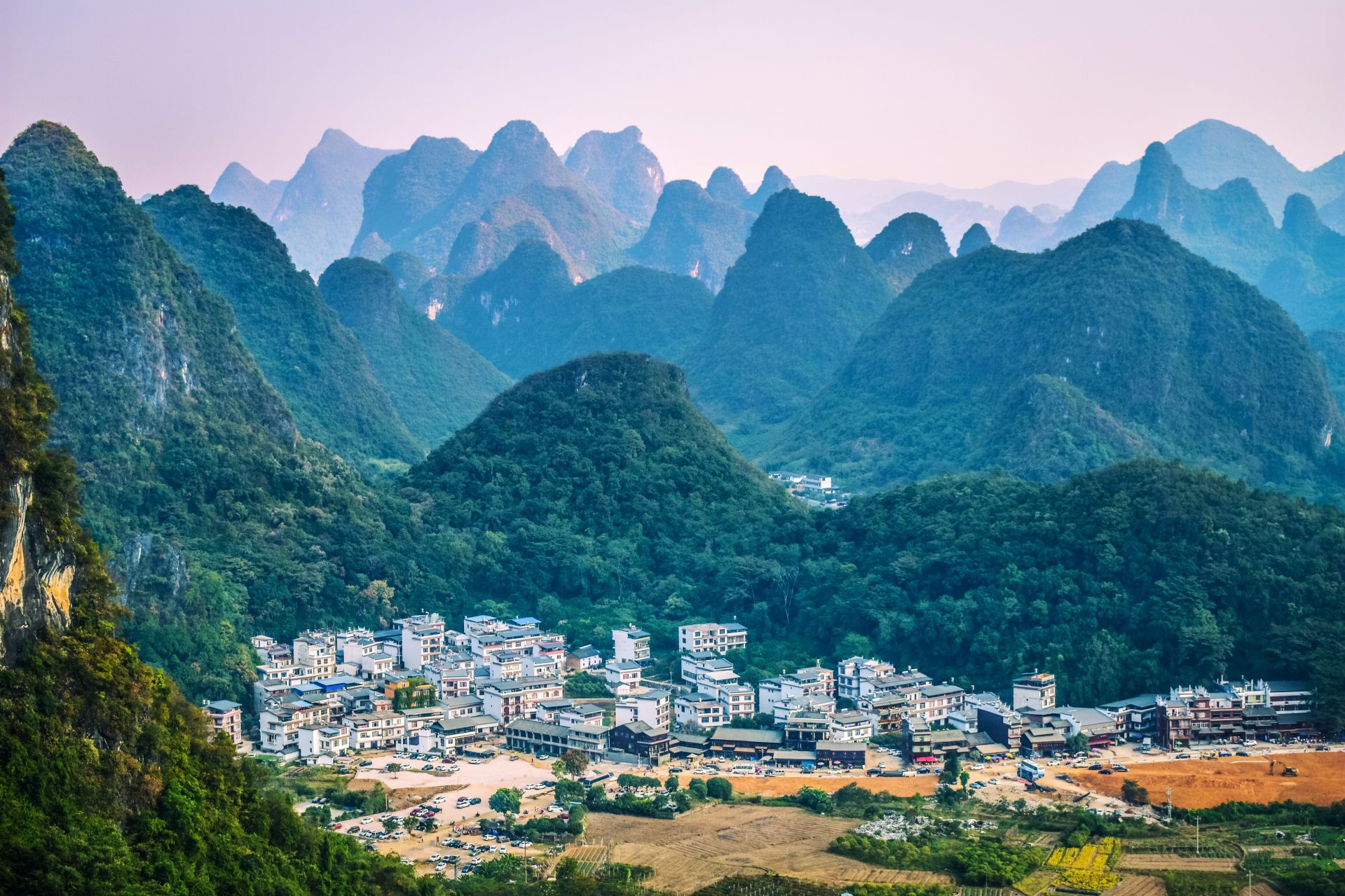 Lexie describes the photograph: This photo was taken while I was glacier-trekking in the Patagonia region of Argentina. The picture depicts the sun behind the Argentine flag, flying proudly over the Perito Moreno Glacier in Los Glaciares National Park.

Buenos Aires is a metropolitan, European-style city, and I was so glad I had the opportunity to visit El Calafate and El Chaltén and enjoy life at a slower pace. Learning about the indigenous and native populations that inhabit these small towns and witnessing the natural beauty of Patagonia that travelers come from all over the world to see was both eye-opening and breathtaking. 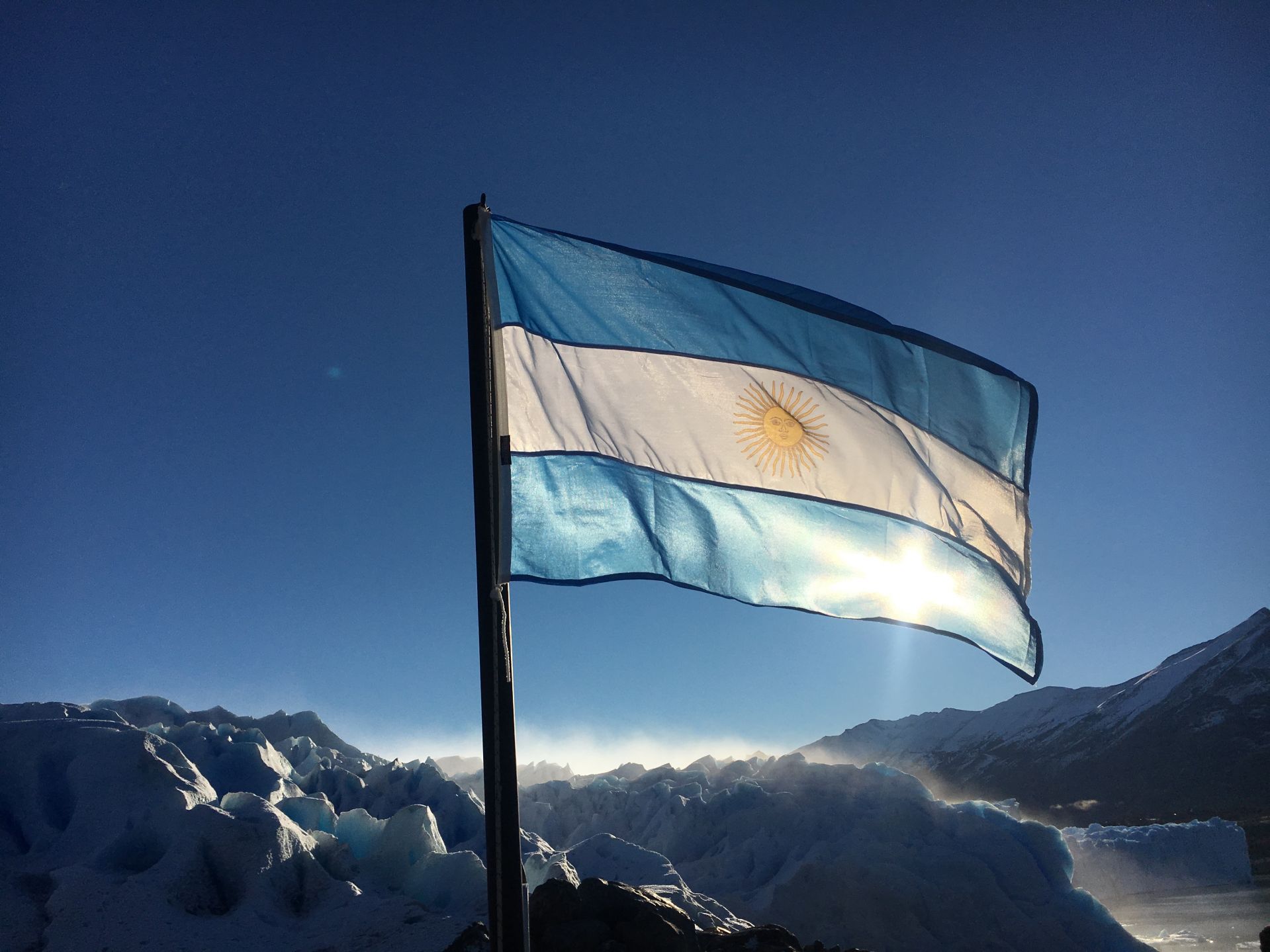 Abigail describes the photograph: I lived at a Danish folk-high school (“følkehøjskole”) with Scandinavians my age, exploring music and culture based in the town of the massive Roskilde Festival, which would be celebrating its 50th festival this summer. We would receive free tickets to small local concerts outside of Copenhagen, and though this crowd was no bigger than 30 people, it was the most electric concert ever. The Scandinavian musicians would address the crowd in Danish and English, sometimes Swedish. But everyone was on board. 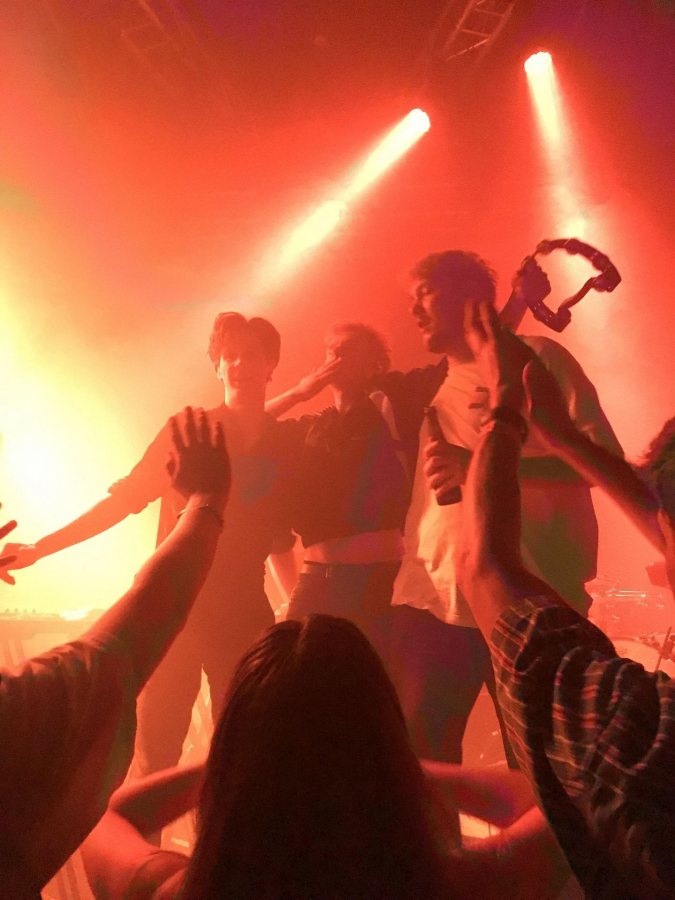 Nicole describes the photograph: This image shows a small sit-in and take-away restaurant located a block from my classroom in Buenos Aires. Most important to me was the Spanish menu by the grill. Here I practiced the few Spanish words that I had picked up. I recall how happy I was whenever I walked out with the right order to go.

My host mom had taught me just enough words to get by in the city, ordering my afternoon snack, for example, would be “Quiero dos empanada de carne, para llevar, por favor” (“May I please have two beef empanadas to go”).

The photo embodies food and language. The two became very apparent and crucial as I moved to Barcelona and Cape Town. In sharing these two aspects with the people I met, I was able to see myself as a Black African woman living in world-class cities and proudly share where I come from, the places I had been, and where I was going. 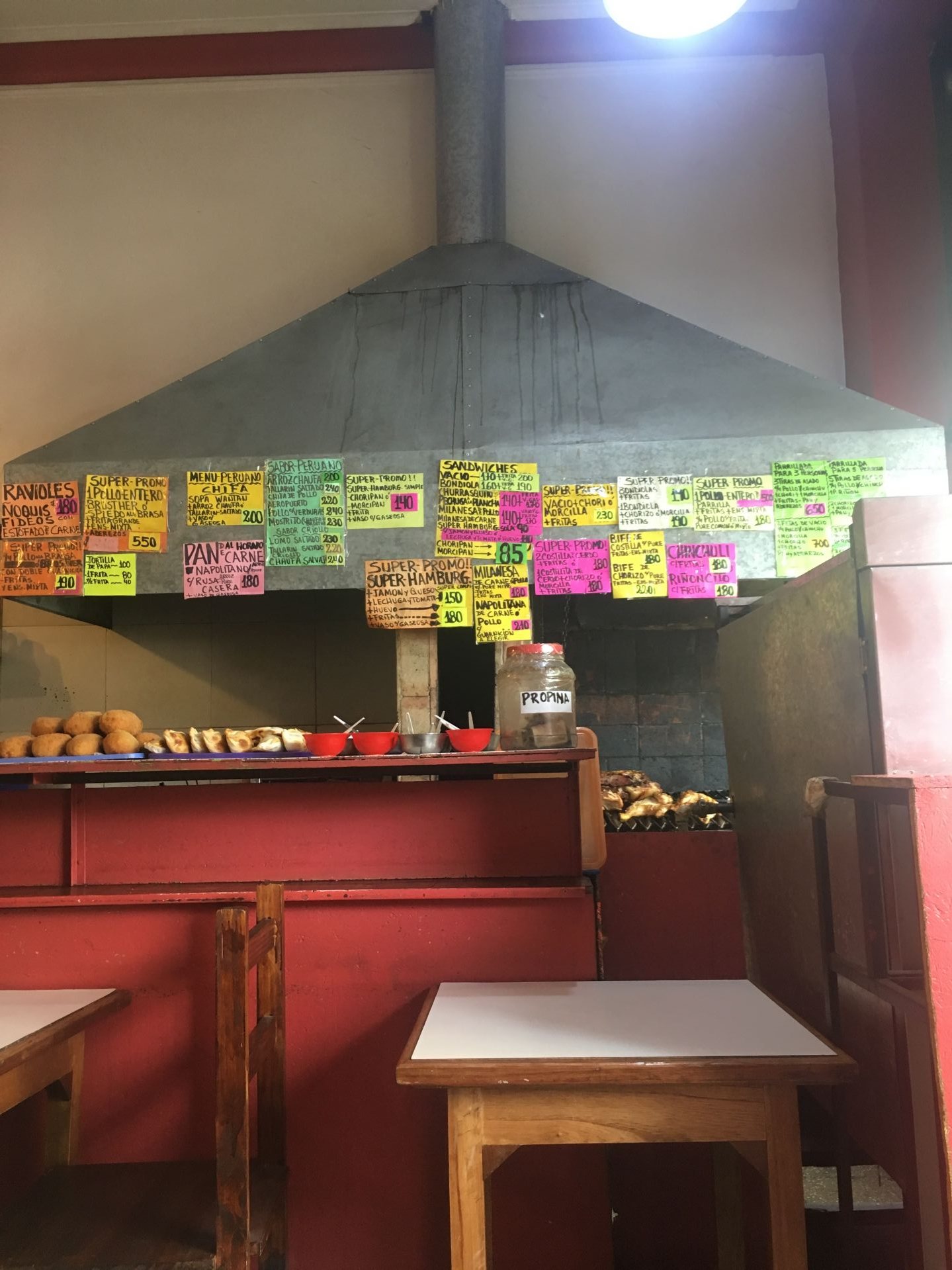 Alexandra describes the photograph: A view out the window of the Uffizi Gallery in Florence, Italy. The Palazzo Vecchio is peeking out in the background beyond a statue and window reflections. 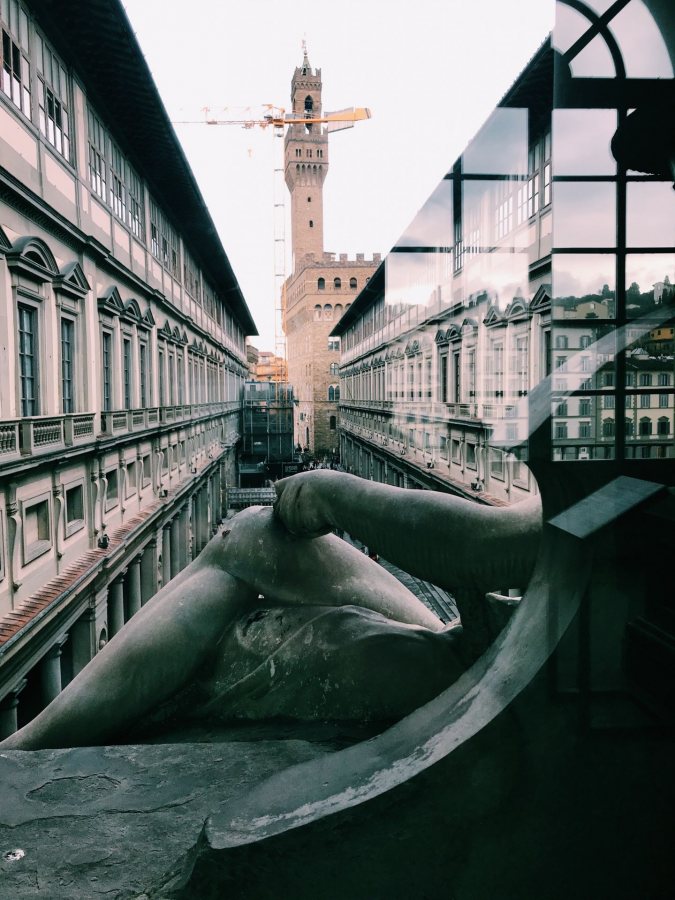 Julien describes the photograph: A Londoner tends to pigeons perched atop the wall along the north side of the Thames River on a brisk February day. This photograph makes me think of walking with my grandfather along the San Francisco Bay. The pigeon flying from this man’s hand represents the growth of my relationship with my grandfather — the effort to prepare me for my own journey of life. 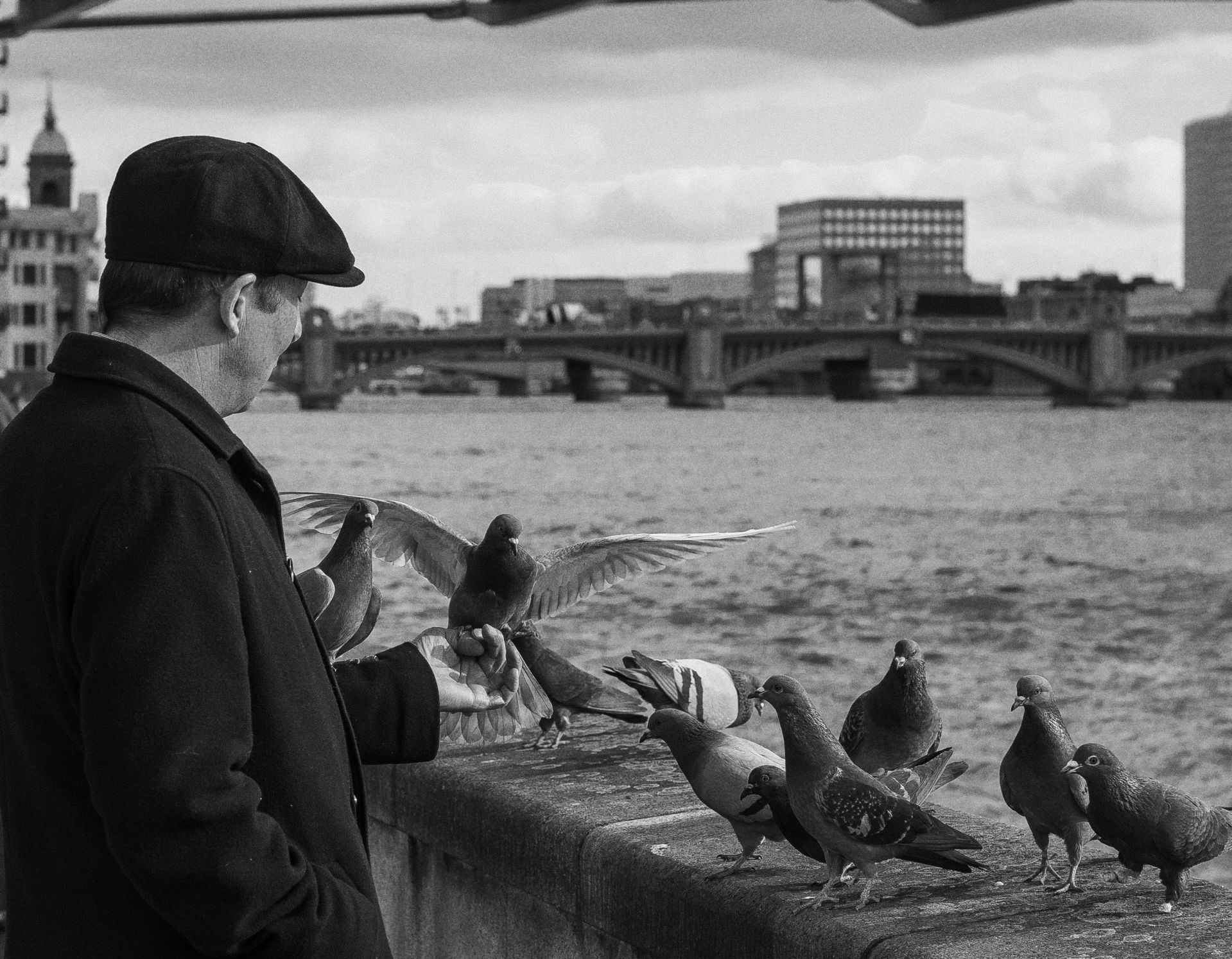 Hannah describes the photograph: Taking a break and enjoying the view with friends in Mount Aspiring National Park. On our second day trekking through the park, we stumbled upon what we claim to be the “best bench in the entire world.” We sat there for a few minutes and took in the view.

Going abroad to New Zealand enhanced that feeling of living in the moment and taking advantage of everything there was to offer. 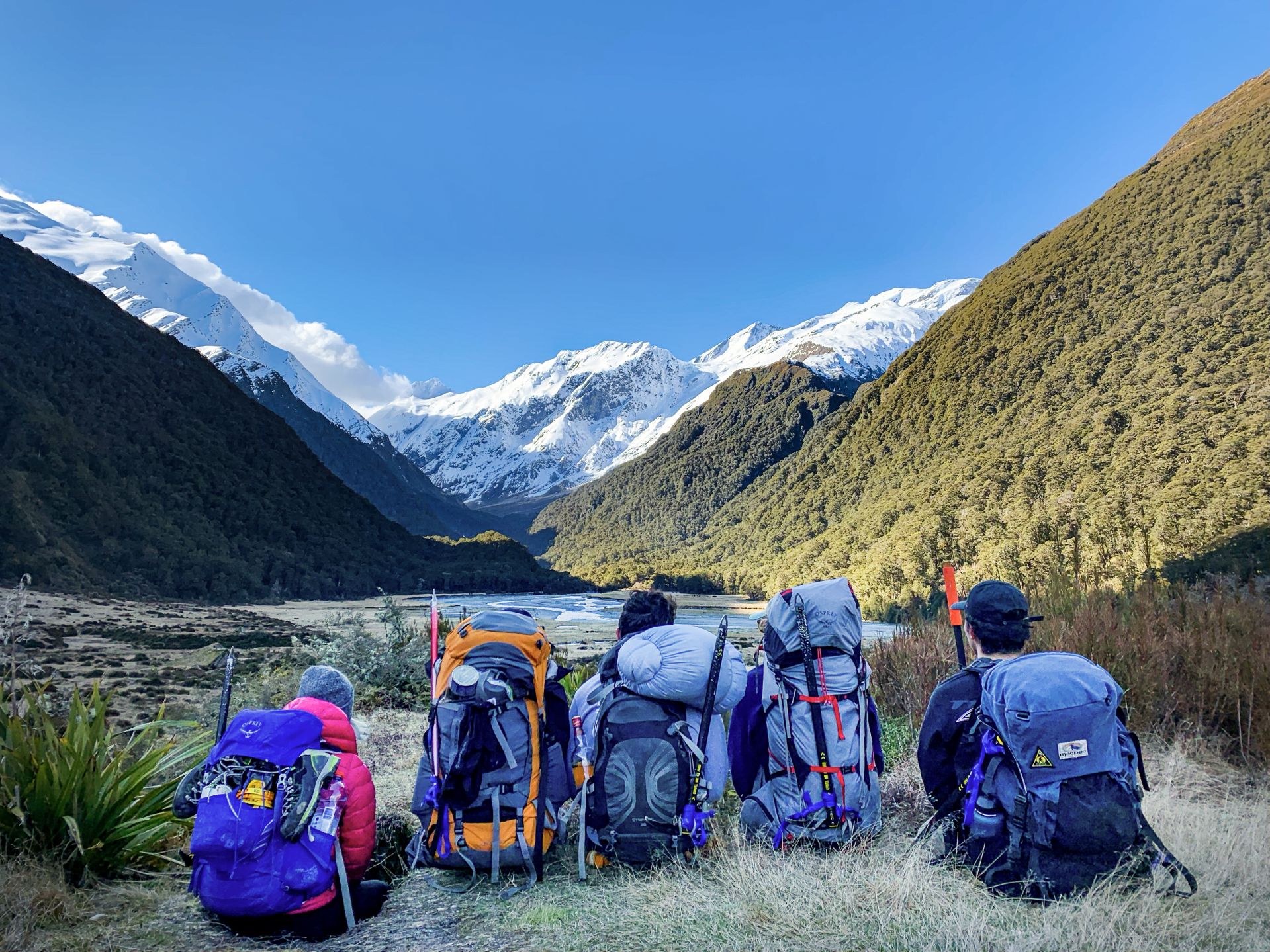 As 15 students of Shakespeare prepare for London, it’s much ado about leaving