In December, when food pundits and the industry were forecasting food trends for 2020, their predictions included vegan cheddar made from cashews (The Food Institute), sweet and sour bone broth (Eater’s megalist) and monk fruit syrup (Whole Foods).

No one was talking about eggs. And there was no reason for Jesse Laflamme ’00 to think that his New Hampshire–based organic egg company, Pete and Gerry’s, was going to suddenly be striving to meet a radical jump in demand.

Cut to June 2020, when The Wall Street Journal posed a culinary question tailored to this precise moment in pandemic time: What do we really want to eat when there is no one around to impress? “The answer, as often as not, is eggs.”

From the deviled to the Dutch baby, eggs have been having such a moment that grocers around the country limited purchases of this most basic of foods starting in late March. Price spikes soon followed, along with empty shelves that indicated that eggs had become the refrigerated version of toilet paper: hoard-worthy.

Pete and Gerry’s Organic Eggs — laid by free-range hens raised without antibiotics or pesticides — were a hot commodity. So too was the other brand Laflamme founded in 2002, Nellie’s, free-range eggs certified humane by the nonprofit Humane Farm Animal Care organization.

“We are selling every single egg we produce,” Laflamme says from his home in Hanover, N.H., during a rare quiet moment.

Early on in the pandemic, the company entirely revamped its safety practices, and coped with two small COVID-19 outbreaks in its packing facilities. But practically overnight, Laflamme said, orders for Pete and Gerry’s eggs increased in volume by between 30 and 50 percent. “It is really significant,” he says.

As he put it, Hannaford, a Maine-based supermarket with stores throughout New England and New York, might be asking for a trailer and a half of those Pete and Gerry’s eggs, but the company would only have one trailer’s worth to send their way. No matter how much homebound humans are craving eggs, farmers can’t make hens lay any faster than usual.

Initially, the increased demand could have been chalked up to an annual egg-centric event: the impending Easter holiday, which fell on April 12. But that Sunday came and went, and eggs were still flying off the shelves. Not only were hordes of Americans becoming bread-making experts, they were also apparently baking cakes, cookies and other family-friendly recipes that called for eggs.

The New York Times cooking site started making recipes available for free to nonsubscribers, including egg-oriented ones like Eli Zabar’s egg salad sandwich, in categories such as “30 Recipes for Lunch at Home,” perfect for workers suddenly ensconced in home offices and missing the local deli. (The secret to Zabar’s egg salad? Toss half the whites for double the yolkiness.)

At the food and cookware website Food52, the late-May obsession was a recipe from a Charlotte, N.C., restaurant for the apparently addictive Kindred Milk Bread, served warm and colored a warm yellow by no fewer than three large eggs. (And Pete and Gerry’s own website offers even more recipe ideas.)

No wonder people need more eggs. But Laflamme is still a little stunned by the demand. As organic producers,  Pete and Gerry’s is very “niche,” he says. So too is Nellie’s, with its free-range eggs raised on small family farms. “We are really an outlier.”

“We are selling every single egg we produce.”

He considers his company an outlier because, while the market for organic eggs is growing, organic flocks still represent a small percentage of the vast numbers of laying hens in the United States. In May there were 390 million laying hens nationwide, according to the U.S. Department of Agriculture. Only 15.7 million, or about 4 percent, were certified organic. That number fluctuates, but Laflamme said it’s usually between 5 and 6 percent. In its weekly reports on the egg market, USDA’s Agricultural Marketing Service doesn’t even list organics.

And even within that small sliver of the market, there is abuse of the organic label, says a watchdog group, the Cornucopia Institute, which estimates that roughly 80 percent of the eggs that are labeled organic in the U.S. might be the product of organic-fed, antibiotic-free hens, but they’re still being raised in factory settings and never see the light of day.

In Cornucopia’s rating of organic eggs from 1 to 5, Pete and Gerry’s recently received a 4-egg, or “excellent” ranking, whereas national brands like Trader Joe and Horizon Organic eggs scored only one egg in the same period.

Taking over as chief financial officer right after Bates, Laflamme, now owner and CEO, has led the company to annual growth rates of 20 to 30 percent every year in the last decade. (The company name comes from Laflamme’s father Gerry, who took over his father-in-law’s farm in Monroe, N.H. in the late 1970s, and Gerry’s cousin Pete, who handled distribution. The family converted their operation to organic in the late 1990s.)

These days Pete and Gerry’s buys eggs from 65 small family farms throughout the Northeast, including in New Hampshire, Vermont, and Pennsylvania. To supply its Nellie’s brand of free-range eggs — named after Laflamme’s pet hen from childhood — the company works with another 60 small family farms, including in the Midwest. With a second packing plant in Pennsylvania, the firm employs about 200 people, all told, on the packing and shipping side.

If Pete and Gerry’s and Nellie’s were well-positioned for the egg boom, the industry as a whole had a harder time responding to it. As with flour, toilet paper, cleaning supplies, and other commodities, the problem wasn’t so much short supplies as disruptions to the supply chain. As Laflamme points out, there are actually too many, egg-laying hens in the country, a result of an over-correction to a shortage created by the 2014–15 avian flu outbreak in 21 states.

It’s the destinations for those eggs that presented a problem as the pandemic began.

One-third of all egg production in the U.S. goes in liquid form (described by USDA as “broken”) to the food service and large-scale restaurant markets. Another 7%, so-called “loose” eggs, goes to the same outlets in bulk cartons, the kind that are open at the top and too floppy to simply be redirected to grocery stores. With most commercial food service shut down from March into May or later, the loose eggs had nowhere to go. Prices dropped to something like 39 cents a dozen, Laflamme says.

In theory those extremely cheap, still entirely edible eggs, might have been redirected to grocery stores. But egg producers were stymied, Laflamme says, “by the inflexibility in our supply chain. They can’t get their hands on cartons.”

To be clear, Laflamme doesn’t mean cartons full of eggs — he means cartons for eggs. “There are only four or five companies in the whole country that make those paper cartons,” Laflamme says, and they couldn’t adapt fast enough. Here’s another area where the Pete and Gerry’s approach paid off. “Our cartons are made from recycled soda bottles. They are a premium product and we largely haven’t been disrupted that way.”

Instead, the company’s major adaptations involved safety in the packing facilities to keep COVID-19 out. “We’ve been focused on meeting the demand while keeping our workforce healthy,” Laflamme says. This included shifting break times, and adding tents to keep employees a safe distance apart and Plexiglas shields on the packing line.

Key to the safety measures was an infrared sensor system for taking employees’ temperatures as they punched in for their shifts. They ordered it from Amazon in the nick of time. “We were early to get hold of it,” Laflamme says. “The owner of the company was losing his mind. We pulled a couple of the last ones he had in his inventory. We were lucky.”

To meet demand, Pete and Gerry’s and Nellie’s expanded the weekly processing schedule by adding a day that was normally devoted to maintenance. The company also offered raises of anywhere from 10 to 20 percent to workers. “We’ve been compensating our workers more, increasing the hourly base rate,” Laflamme says. “It felt like heroics for them to come in. Especially early on.”

They had an early small outbreak of COVID-19 in the Pennsylvania packing plant, with two workers self-diagnosing over the weekend. After that, 20 more called in sick the next day, in an abundance of caution. The company had to hire temporary workers to replace them. It helps, Laflamme says, to have operations spread out over many family farms (thus confirming that old maxim about not putting all your eggs in one basket).

Pete and Gerry’s sustained only small losses to its usual business and more than made up for them at the grocery store, by far its biggest outlet. “Ninety-nine percent of our business is oriented toward carton egg production,” Laflamme says. “Make that 99.9 percent.” Thus they were in the sweet spot in a marketplace that overall, is suffering.

“We are doing remarkably well,” he says. “We consider ourselves, knock on wood, in a good place simply because [the COVID-19 crisis] has increased home egg consumption and grocery shopping in general.” Typically Americans spend more on food eaten outside the home than they do on groceries. Suddenly they were stuck at home, many of them millennials learning how to really cook for the first time.

Laflamme speculates that because people were rediscovering their kitchens in lieu of spending money at restaurants, they wanted to cook with quality ingredients and were willing to pay more for them. (As indulgences go, even the organic egg is still a bargain at the supermarket, generally priced under $6 per dozen.)

“We’ve been compensating our workers more, increasing the hourly base rate…It felt like heroics for them to come in. Especially early on.”

What Laflamme doesn’t know — no one does — is whether this trend will continue. The price of carton eggs, after climbing in April and May, has mostly leveled off. In the meantime, there is a generation, or two, of people who may be eager to eat out again, but don’t feel safe doing so.

For them, Laflamme surmises, “It’s like, ‘OK, now I know how to make these 10 great dishes — but eggs are so easy. Breakfast for dinner, that is probably going to be happening.’” In his household, that is definitely happening, most commonly with omelettes or French toast. His kids, a 9-year-old son and an 11-year-old daughter, are more than fine with it. “They don’t miss a beat.” After all, their dad is the egg man. 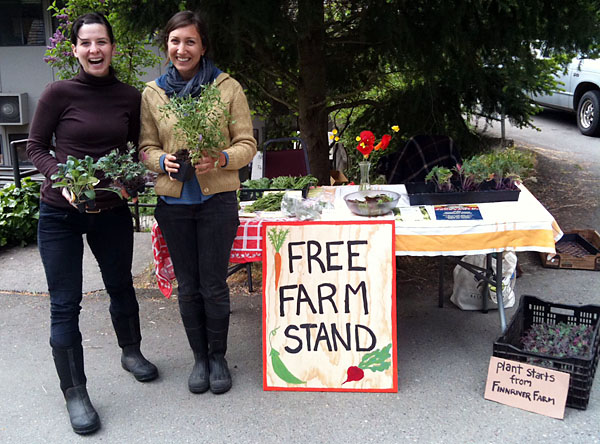 Bates was the diving board for global citizen Alyson Ewald ’90