“The days when winter locked the college doors are gone,” wrote The Bates Student about a century ago. “Bates has learned that winter opens…another door to a world of keen activity and zest.”

The source of this new appreciation for winter? The Bates Outing Club, founded in 1920 “to make the out of doors more entertaining and attractive during the winter months,” according to the Student.

The Bates Outing Club kicks off its 100th anniversary year with a campus gathering on Jan. 15. The featured speaker is Ben Ayers ’99, a former Outing Club president who is now executive director of the dZi Foundation of Nepal and a producer of the acclaimed documentary The Last Honey Hunter.

While its founding purpose was to help students shake off the winter blues, the BOC has evolved into a full-service organization dedicated to helping generations of students, regardless of prior experience, discover joy and new friendships through the Maine outdoors.

Throughout 2020, as the BOC celebrates its centennial, we’ll share monthly highlights about what’s made the club so distinctive and beloved.

1920: The Bates Outing Club is founded

At Bates in 1920, dancing wasn’t yet permitted on campus. But by January, a different avenue for coed socializing, the Outing Club, was up and running.

“Following the example of other progressive colleges and universities, Bates has added to her societies this year an Outing Club,” reported the 1920 Mirror.

Organization work took place the month before, including a membership drive after chapel services that yielded 300 signups, with nearly another 100 registering later.

At first, Outing Club membership required $1.50 in annual dues. Of the club’s first-year revenue of $653.60, the biggest expenditure, $326.90, was to set up lights for nighttime skating at Lake Andrews.

Fifteen dollars paid for a student to visit New Hampshire to “get points” about Dartmouth’s famed Winter Carnival. The BOC would offer Bates’ first carnival in late February of its first year.

“May [the Outing Club] accomplish its purpose, namely, to provide and promote an increased interest in all forms of out-of-door exercise and entertainment,” said the Student. Bates education professor Robert A.F. MacDonald promised that Outing Club offerings “should appeal not only to experts but to everybody.” 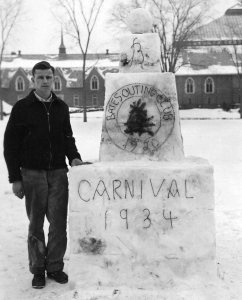 In 1934, a student stands next to a Bates Outing Club snow sculpture featuring the BOC logo. (Muskie Archives and Special Collections Library)

From the start, the club had an open-to-all vibe. The Student noted that “students who had started the club wished all students who wished to belong to the club, both men and women, to have the opportunity.” (In an era where more than a few campus programs and structures were single-sex, this was somewhat distinctive.)

1925: The BOC finishes its first cabin

In the mid-1920s, the Student noted that future offerings by the Outing Club would “transcend those of former years.”

Chief among the transcendent offerings was the club’s own log cabin. Located on the southern slopes of Sabattus Mountain in nearby Wales, about seven miles from campus, the structure was built from hemlocks logged at the site. 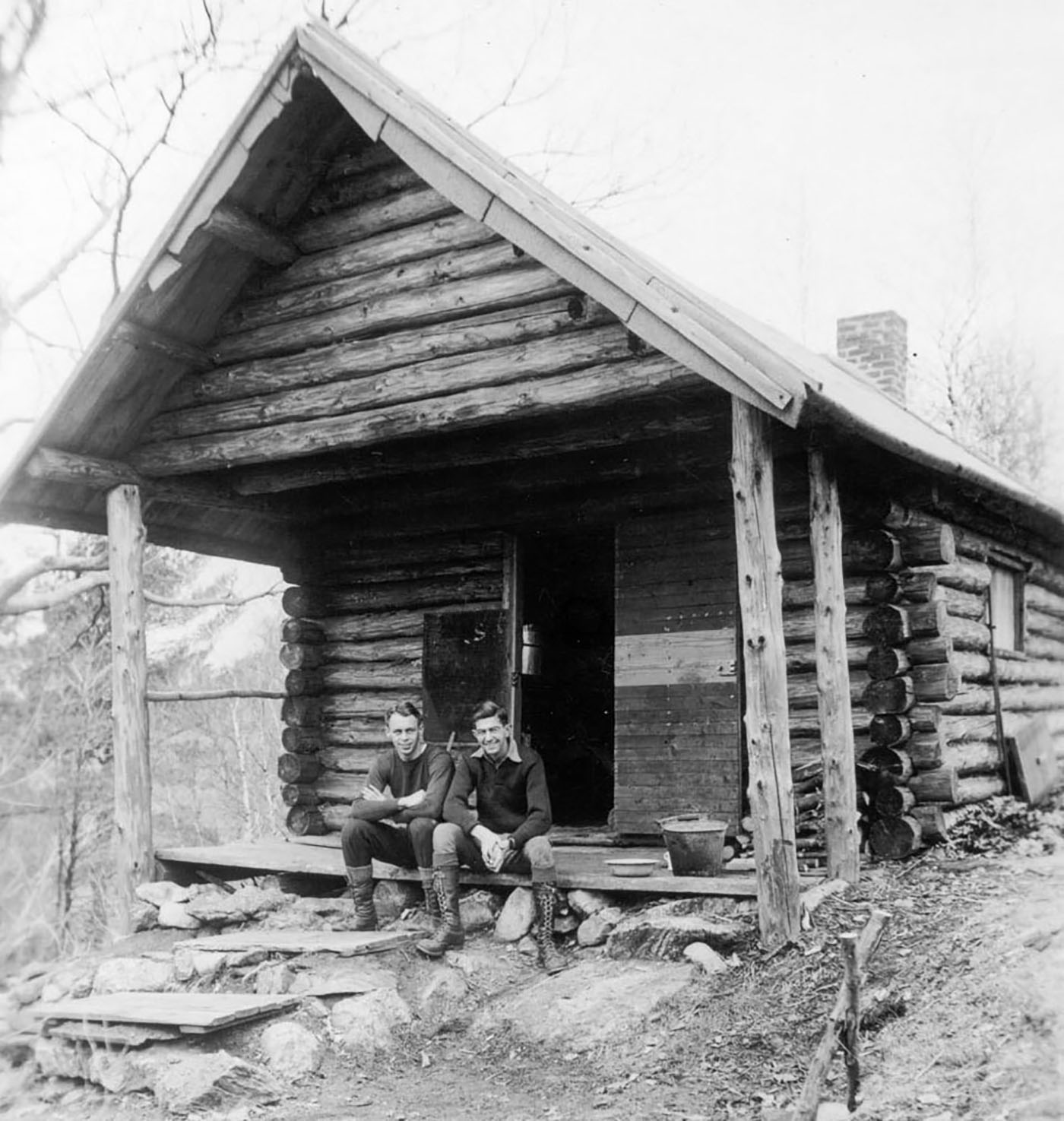 The Student announced the cabin’s completion in January 1925. “Get into the spirit of the Old Log Cabin,” urged the paper.

Get your hands black getting firewood — make ’em smell like pitch — get a blazing fire in the fireplace. Now the door is shut — the sparks leap up while outside the frost hangs in the air.

With plenty of jokes and fun you hand out the bacon, etc., that never tasted so good before, just goes down and tickles your appetite. Finally your gastric vacuole is consolidated and somehow you never felt more invigorated in your life — never healthier and happier.”

The BOC had another cabin in service around that time, in the far western Maine township of Albany, and soon would have one at nearby Thorncrag Nature Sanctuary, dubbed the Stanton Lodge, in honor of legendary Bates professor “Uncle Johnny” Stanton. 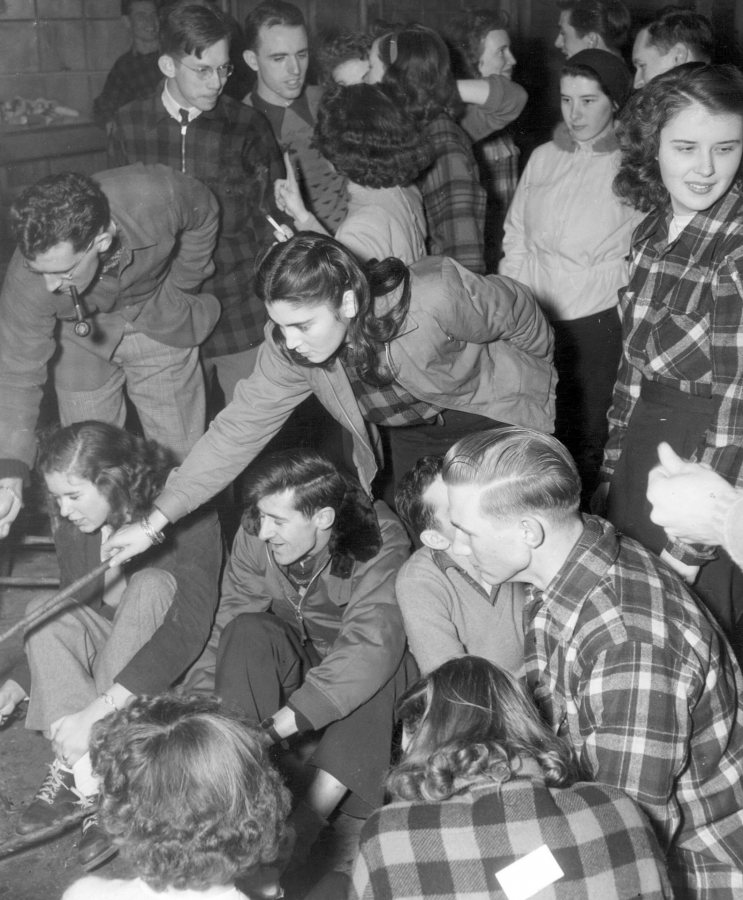 Students crowd the Stanton Lodge at Thorncrag Nature Sanctuary, circa 1950, for a most enjoyable cabin party. (Muskie Archives and Special Collections Library)

“One of the most enjoyable kinds of social gatherings at Bates is a Thorncrag cabin party, especially in the winter,” said the Student in 1932, “when about a half-hour’s walk may be made on snowshoes.”

Though those structures are gone now, the Outing Club still offers an overnight get-away spot, a lean-to within the Marden-Chittick Refuge, 200 acres of land that longtime BOC adviser Judy Marden ’66 gave to the Androscoggin Land Trust as a conservation easement. (One of the lean-to builders was Ben Ayers ’99, the featured speaker at the Jan. 15 BOC kick-off event.)

In the early and mid-1900s, a popular Winter Carnival event was ski jumping. Skiers hurtled down Mount David, taking a jump erected between and behind the President’s House and Cheney House.

These video clips are from the 1936 Winter Carnival.

The theme of the 1958 Winter Carnival was “Winter Olympics,” and so a torch relay to campus was needed. But from where? And lit by whom?

With a Bates graduate holding the Maine governorship, the answer was: Augusta and Edmund Muskie ’36. Once the torch was lit, 18 students relayed it back to campus. 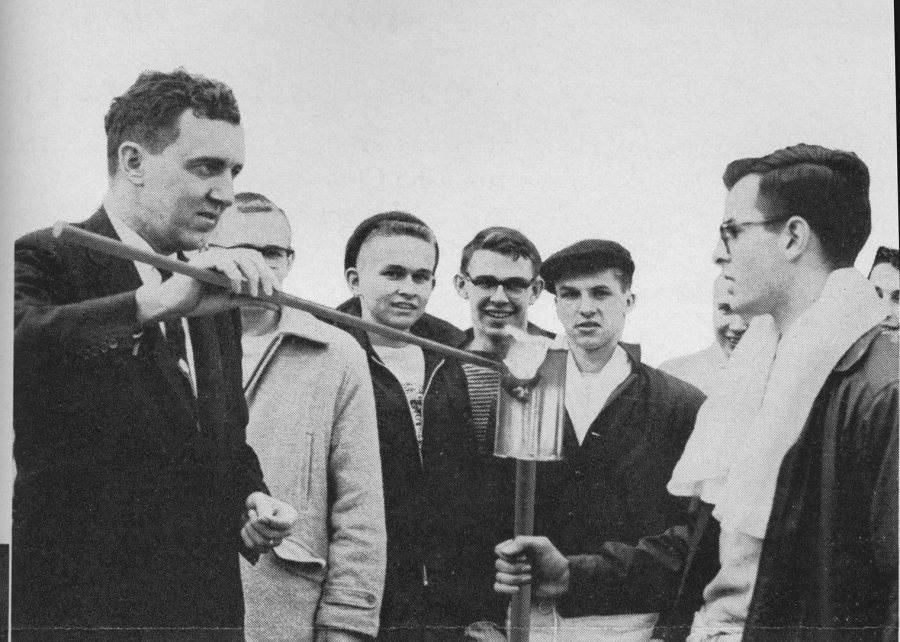 Since 1958, the tradition of the Maine governor lighting the Bates carnival torch and students running it back to campus has waxed and waned. (In 1980, the Outing Club penned an apology to then-Gov. Joe Brennan for arriving three hours late for the appointed ceremony.)

After a hiatus, the tradition was revived in 2019 by students and newly elected governor Janet Mills.

Easily the most famous Bates snow sculpture was the 30-foot Paul Bunyan erected by the Outing Club for the 1962 Winter Carnival.

“So commanding was his presence that he acted as a tourist attraction for many of the town’s people, especially after his picture appeared in the paper,” wrote Louise “Pixie” Norlander Toliver ’62 for the BOC newsletter. 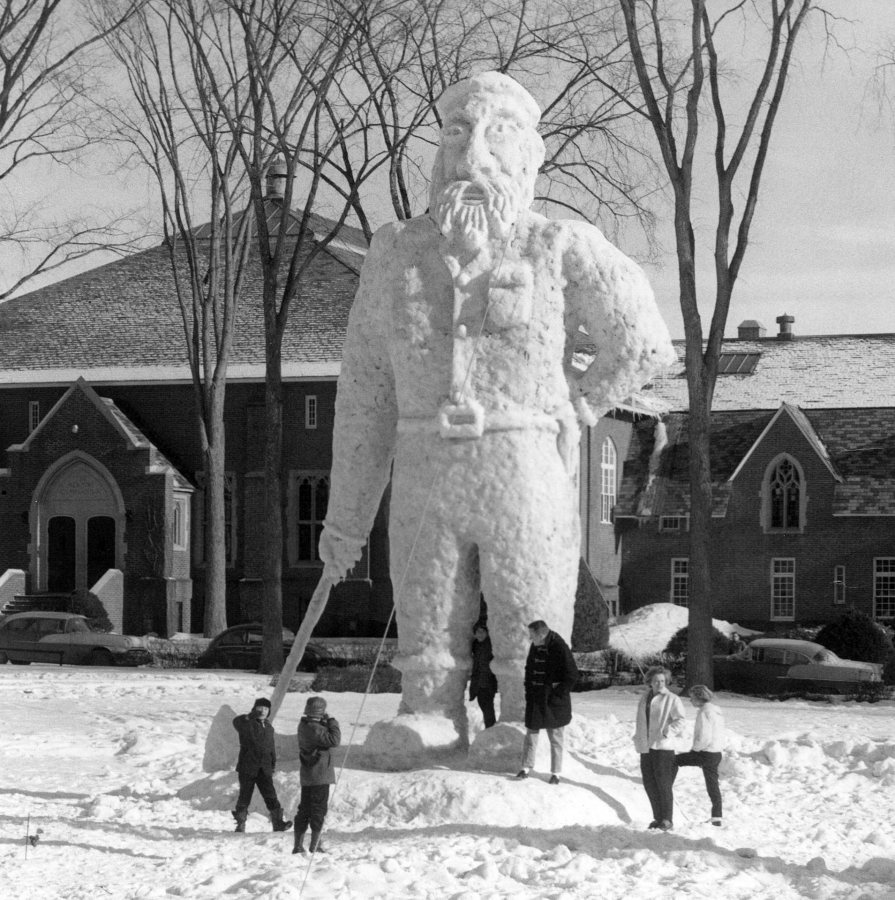 The project was engineered by Outing Club member Douglas Smith ’63, whose summer work in a boatyard and high school experience as a theater stage manager imparted skills to design and build the sculpture’s wood frame, which he covered in chicken wire.

He transported the frame to Bates “tied to the roof of my ’47 Buick,” as he recalled for the 2009 edition of The Legend, the BOC annual magazine. 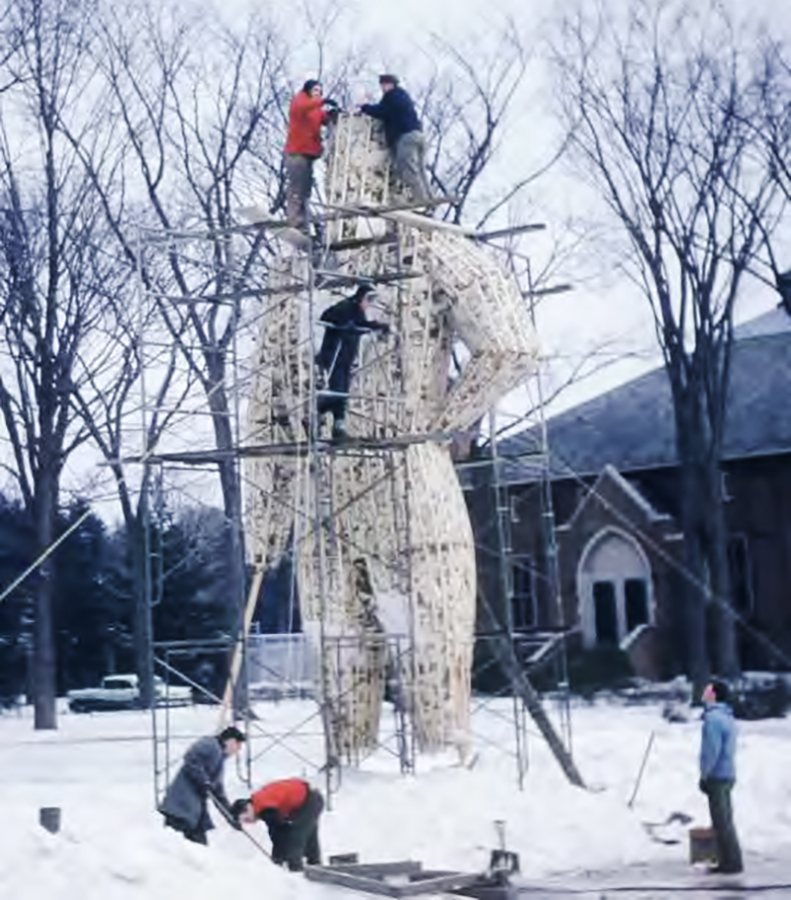 Erected outside Alumni Gym (with help from the college maintenance staff, which loaned scaffolding), the framework was stuffed with crumpled newspapers to provide a backing for the layer of snow, applied by a large crew of students.

Once erected, it was illuminated at night by spotlights for the duration of the Carnival.

Skiing hasn’t been the only way to hurtle down Mount David. In the 1920s, the Outing Club announced plans to create a toboggan chute down the northeast side of the hill, across Mountain Avenue and down Benson Street. It’s unclear if that chute was ever built. 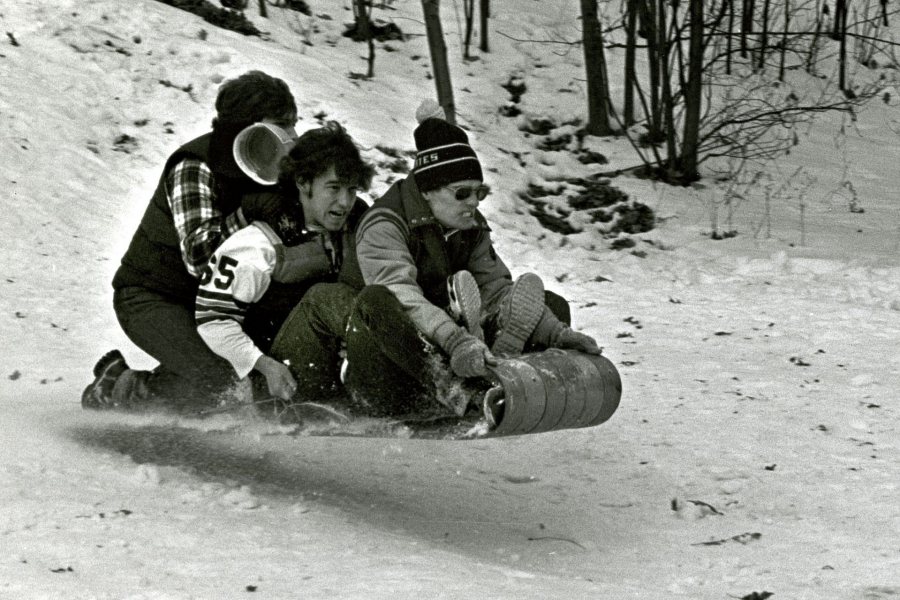 A different route, around 1935, went down the Rand Hall side of Mount David. It featured “an extended chute and a scientifically banked curve” that ended near Rand, bringing riders with “suitable flourishes to the door of their domicile.” 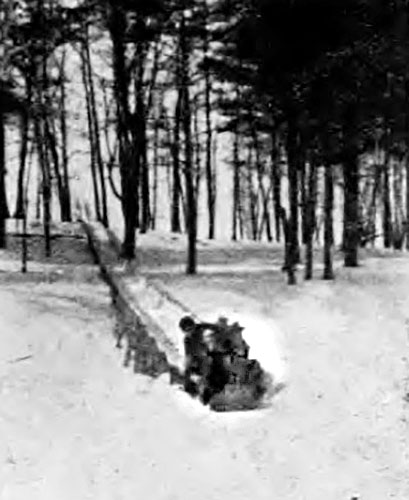 The chute was not without danger: In January 1935, Isabell Butterfield ’37 broke her left arm while on a run.

The Student blamed the student: “The chute that has been erected by the Outing Club is safe if students sliding on it will use some degree of caution by keeping their legs firmly on the toboggan and having a firm grip on the handrails of the sleds.”

In 1955, the Student reported another tobogganing mishap. “Three battered and bruised Cheney House freshmen are recovering from a toboggan ride this week…. No brain, no pain?”

Founded in 1975 and initially held on St. Patrick’s Day, the annual Puddle Jump wasn’t originally under the Outing Club’s auspices. The event has since moved to Winter Carnival, and BOCers now run the show.

The thrill of taking the plunge, of course, is braving cold water and even colder air, though one of those ingredients was famously missing on Jan. 20, 2006. Temps in the 50s greeted jumpers, making it one of the warmest Puddle Jump days ever. 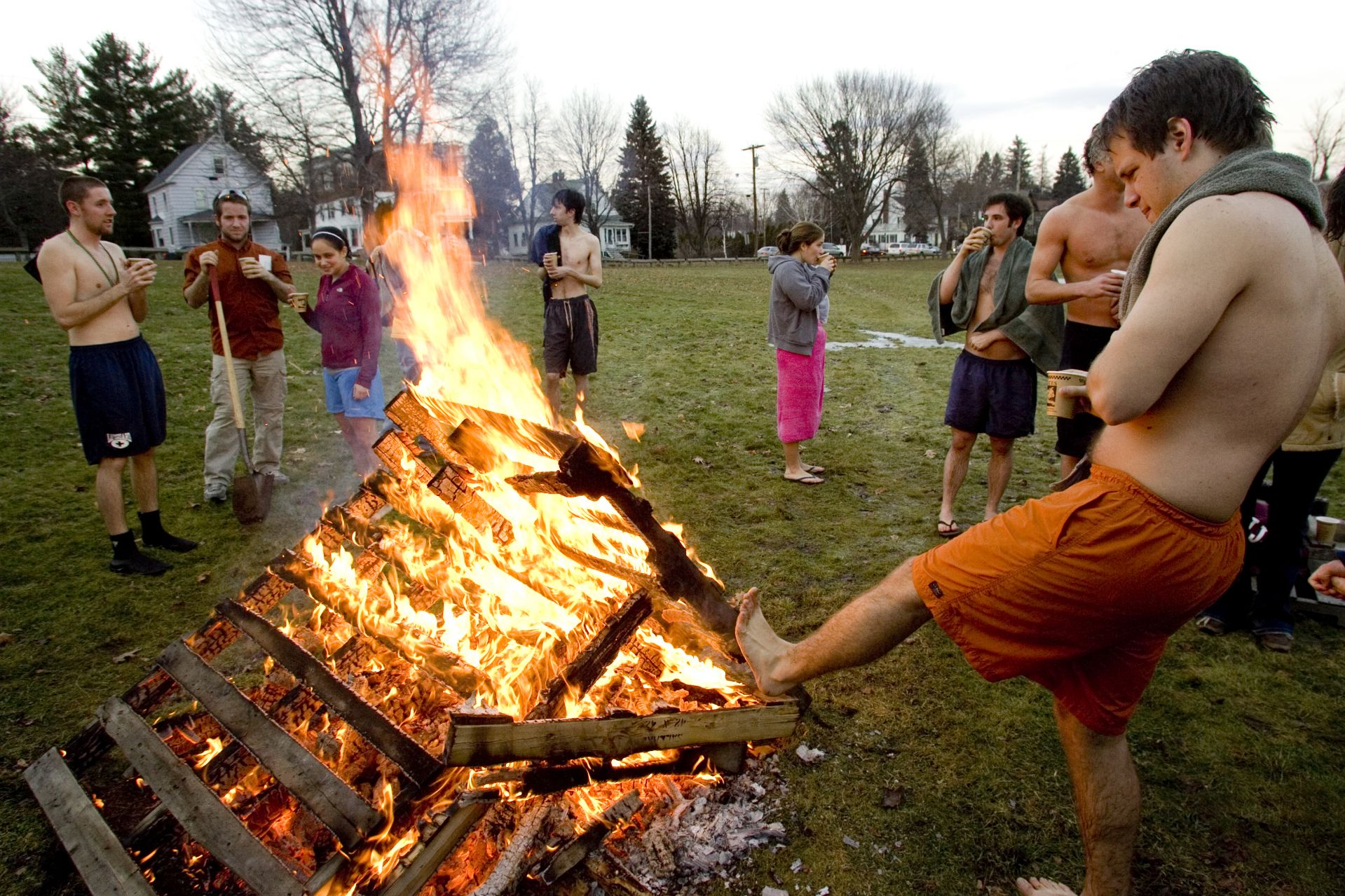 Puddle jumpers warm up by a bonfire after emerging from Lake Andrews on Jan. 20, 2006. They barely needed the extra heat: It was in the 50s that day. (Phyllis Graber Jensen/Bates College)

In 2010, the Outing Club headed to Augusta to accept a Legislative Sentiment honoring the club on the 90th anniversary of its founding.

The sentiment praised the BOC for “inspiring Bates students toward careers in the fields of outdoor and experiential education, exploration, the natural and environmental sciences and other adventurous pursuits.”

Judy Marden ’66, the Outing Club’s longtime adviser, said that the event “reinforced the feeling that we are part of an important continuum of outdoors advocates and enthusiasts.” 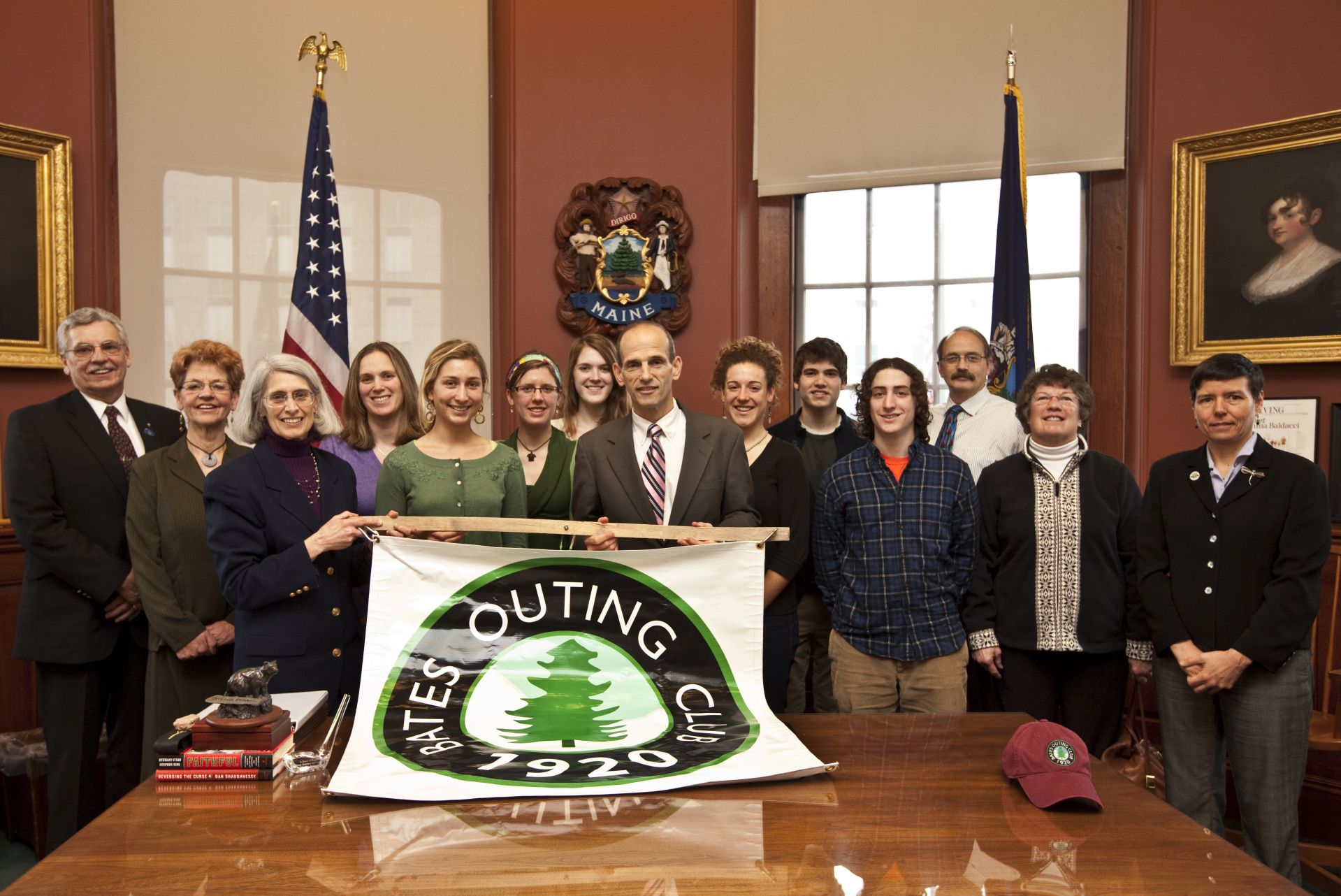 Since 1929, the Outing Club’s headquarters had been on the ground floor of Alumni Gym.

That changed on a January evening in 2013 when members worked together to move all their gear into new digs in the former Dining Services kitchen in Chase Hall. 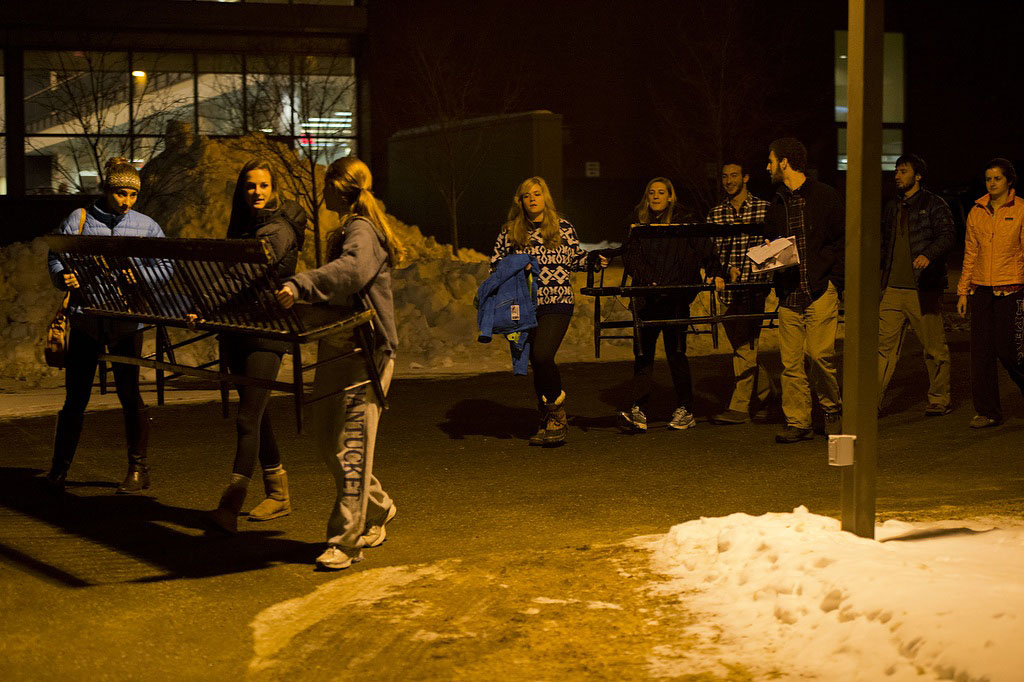 Many hands make light work in January 2013 as BOCers move their stuff from their former headquarters in Alumni Gym to a new space in Chase Hall. (Mike Bradley/Bates College)

A century ago, Bates students hauled logs and tar barrels up Mount David for massive bonfires to celebrate sports triumphs or to drive away the winter blahs.

Though bonfires atop Mount David are a no-no today, the Outing Club has in recent years kept the flame alive thanks to a tradition known as Children of Midnight. 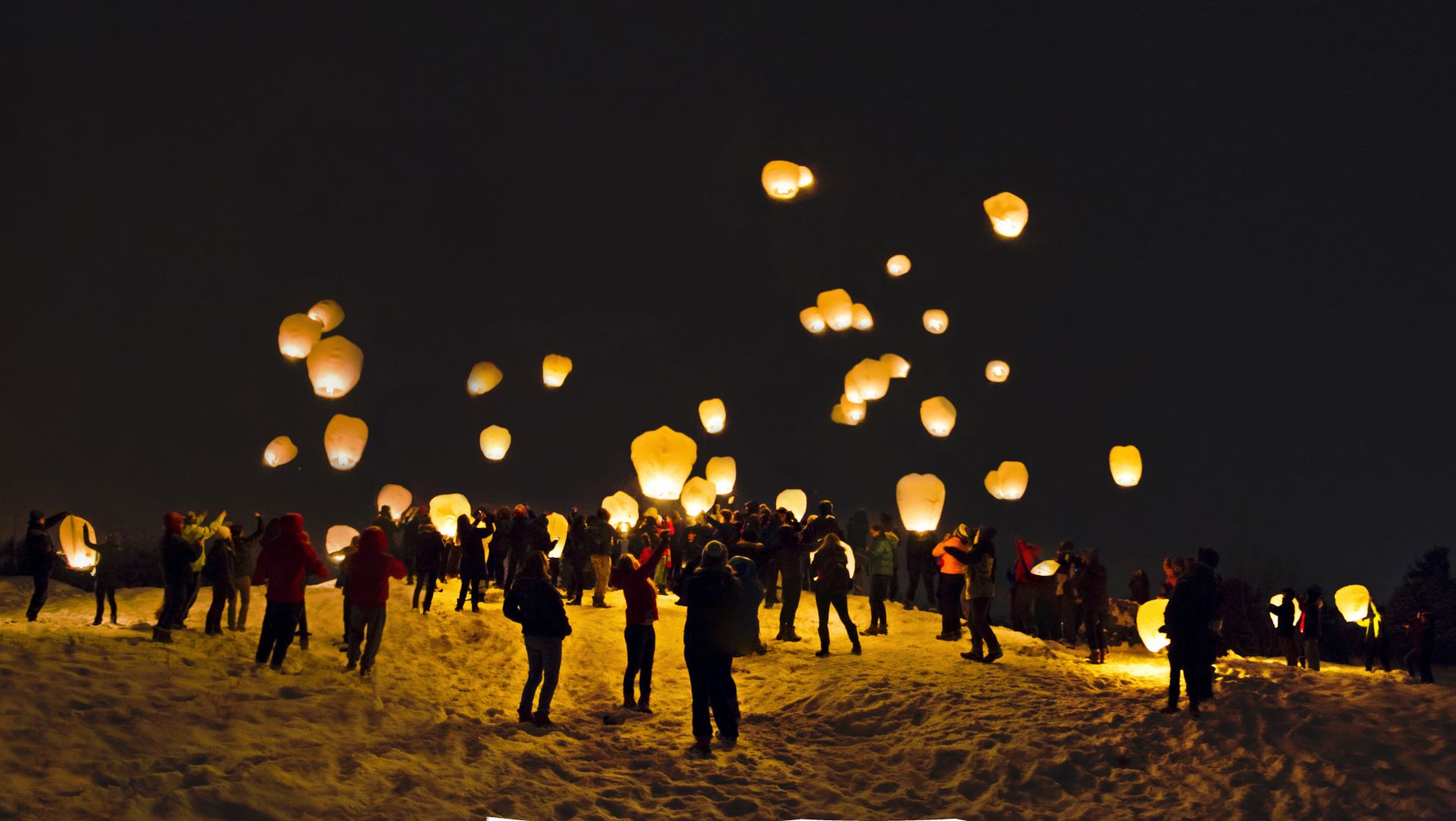 Children of Midnight is an umbrella term for any late-night, semi-spontaneous BOC event, whether it’s a bicycle ride around campus or, as on the night of Jan. 28, 2013, a hike up Mount David and the release of sky lanterns. (We note and acknowledge that sky lanterns are less in vogue today due to sustainability concerns.)

Michelle Pham ’15 of Vancouver described the scene this way:

“It is snowing heavily in Maine today, and all the pathways glisten and sparkle with fresh crystals of snow. The purity of the snow combined with the warm light of the lanterns created such a mystical ambiance that was entirely beautiful.”