Completed this year after two decades of planning and construction, Bates’ restoration of the exterior and the signature stained-glass windows of the Peter J. Gomes Chapel has been recognized by a statewide historic preservation organization.

The 2020 Honor Award from Maine Preservation is not only a feather in the college’s cap but a lifetime-achievement award of sorts for Jim Nutting ’76, who restored most of the stained glass.

“That’s one of my legacies,” says Nutting, who points out that he married his first wife, also a Bates graduate, in the chapel. He rebuilt nine of the chapel’s 10 large decorative windows, eight of which date from the mid-1930s and depict influential figures in Western history. (One of those, featuring poet Dante Alighieri and artist Fra Angelico, was rebuilt as a pilot project by a different contractor circa 2012.)

The work will “stand for 100 years or more,” says an understandably proud Nutting, who has done stained-glass work since the 1970s and went full time in 1997. He does business as Maine Art Glass down the road from Bates in the town of Lisbon Falls.

Aside from the Dante–Fra Angelico panel, “I did absolutely every speck” of rebuilding the Gomes glass panels, says Nutting.“It was an honor. I’m so proud to have been involved.”

“Jim was the right person for the job,” says Pam Wichroski, Bates’ director of capital planning and construction. “We were lucky to find him.” She adds, “It’s always good to have a Bates alum involved.”

“The beauty of stained glass is hard to match,” says Nutting. “You can look at all the architecture and fancy woodwork, but the glass jumps out at you, because it lets the light through and the colors. It’s exciting.”

Nutting took a course in making stained glass soon after graduating from Bates with a biology major. (He has a Butterfly and Insect Museum alongside his studio and retail store in the former St. Cyril and St. Methodius Church in downtown Lisbon Falls.) He took up glass work full time after 25 years at Central Maine Medical Center, where he started as a dishwasher while still at Bates and rose to the post of corporate fundraiser.

For major projects, Nutting partners with Matt Kendall, whose Vintage Glass Works handles business arrangements and field installation while Nutting focuses on the glass art itself.

Consigli Construction, which assumed management of the Gomes project early on, asked the pair to complete the stained glass after a prior contractor dropped out. The project was the largest Nutting has ever taken on. “I might not have undertaken it if I’d been by myself,” he says.

“We were talking about performing a miracle in nine, 10 months.” The work would include cleaning usable original glass, finding and cutting new glass to replace broken pieces, and replacing structural components, notably the “came,” the metal strips that hold the glass bits.

But they made it happen. “Seeing how great a team they were to work with and how seamless the transition was, it was nothing short of a fantastic experience with them,” says Nate Berry, Consigli’s project manager for the Gomes work.

For both the glass team and Consigli’s masons (the company’s masonry expertise goes back to its founding in 1905), particular challenges came with replacing the window traceries, ornate components in cast stone (a refined form of concrete) that hold the glass assemblies.

The tracery replicas were products of state-of-the-art technology, but the process also produced that rare phenomenon: the perfect being the enemy of the perfect. The dimensions of the new traceries were more uniform than the window openings, which had shifted over years of exposure to the elements. That necessitated some assiduous tweaking in both the glass studio and the chapel.

The stained-glass panels, though rebuilt to specification, needed subsequent size adjustments. They also had to be partially disassembled — as Nutting casually puts it, “broken” — and fitted section by section into the traceries.

Meanwhile, Consigli masonry foreman Keith Lyford put his 40 years of experience to work finding ways to fit the traceries to their window openings. “That was one of the biggest conflicts we had to work through, but with the expertise of Keith and his team, it wasn’t anything that we couldn’t overcome,” says Berry.

The Gomes restoration has been on Wichroski’s radar more or less since 2000 and her arrival at Bates as a Facility Services project manager. Having it done “feels wonderful,” she says. “I’ll no longer walk around the chapel just cringing at the continued deterioration.”

She was Bates’ first project manager for the chapel, but not the last — that would be Shelby Burgau, who started at Bates in 2017. “She’s very hands-on, very detailed, so she was great at working closely with the Consigli team and monitoring their progress,” Wichroski says.

As Burgau herself says, “The chapel means so much to so many people — I feel really proud that we were able to restore its structural integrity and original beauty so that people can continue to enjoy it for another century-plus.”

Bates’ Honor Award was one of 12 given for building projects. (It’s Bates’ second such accolade from Maine Preservation: The first recognized the college’s transformation of Hedge and Roger Williams halls into academic buildings.) And the honor, says Wichroski, validates the college’s decision to take the high road in refurbishing the 1913 chapel, hewing as closely as possible to the original aesthetic and functional goals for the building.

As for Nutting, he made sure that his and Kendall’s contributions would be remembered, signing their names in glass on one panel and dating it. Nutting says that he feels “a lot of affinity towards the college. I’ve always been proud to have graduated from Bates.”

Winning the bronze metal: The next time you wander up Bardwell Street toward Bates, you’ll be able to see with your own eyes evidence of the biggest news in the construction of the Bonney Science Center. 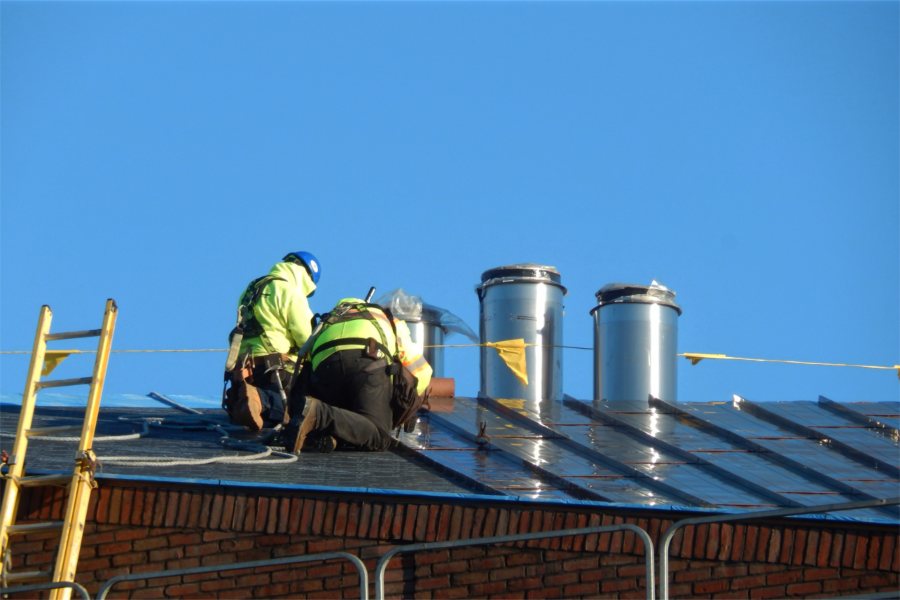 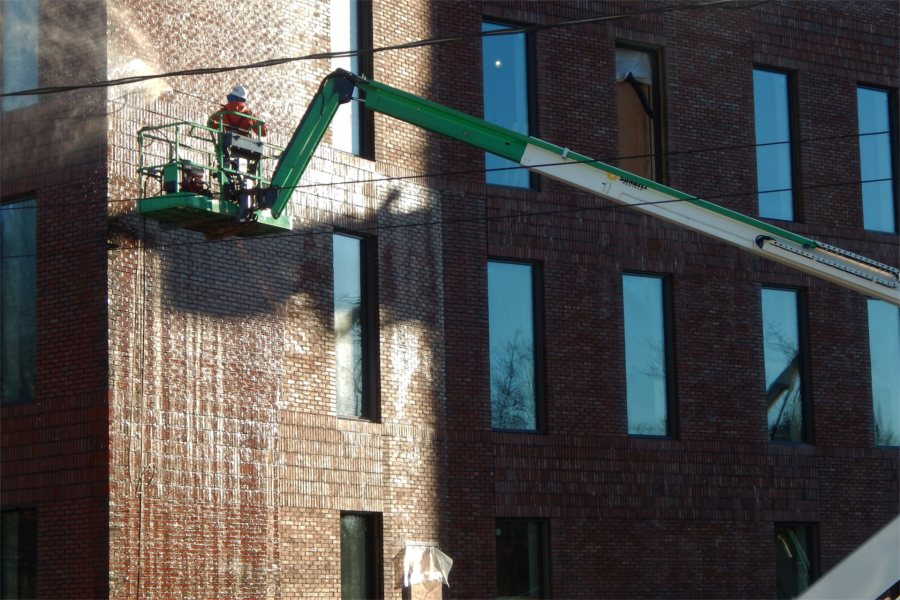 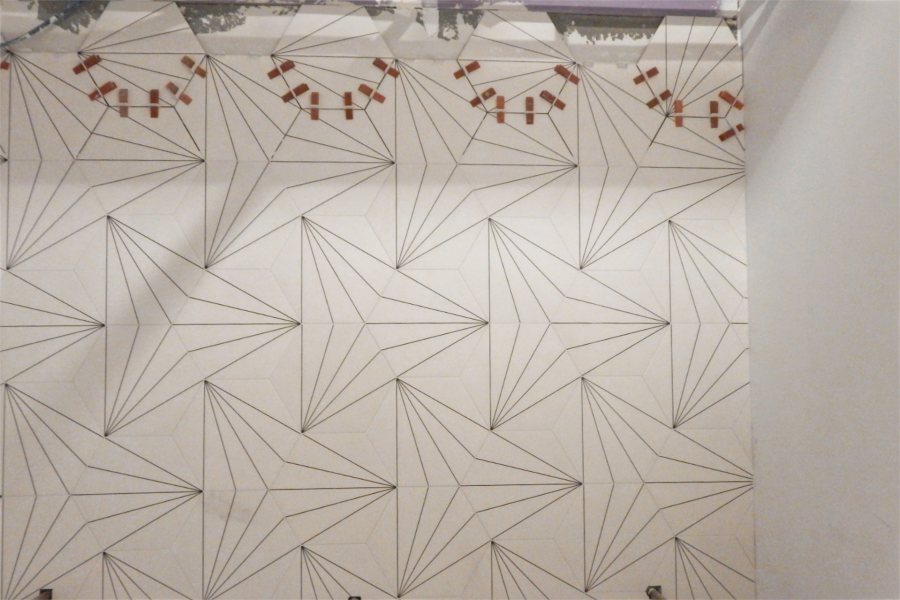 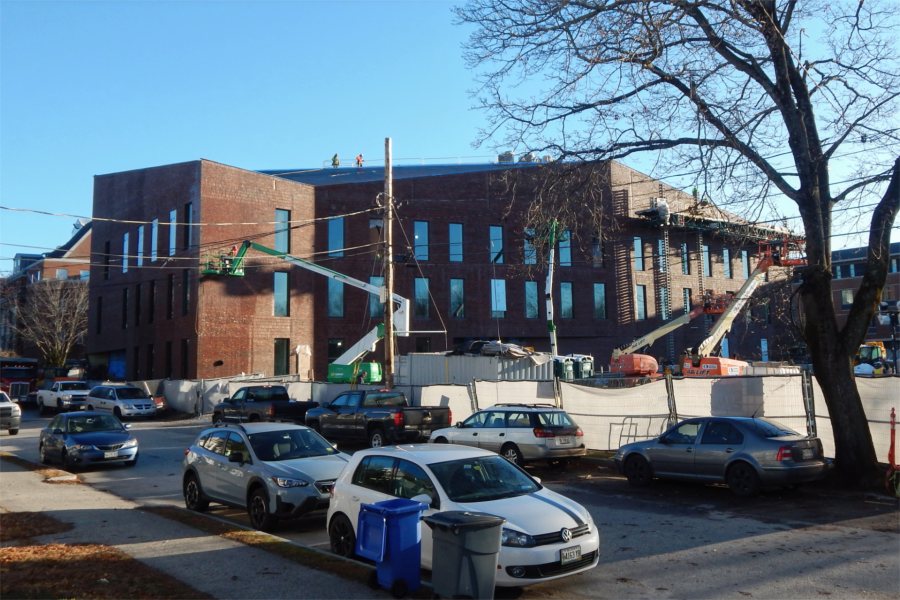 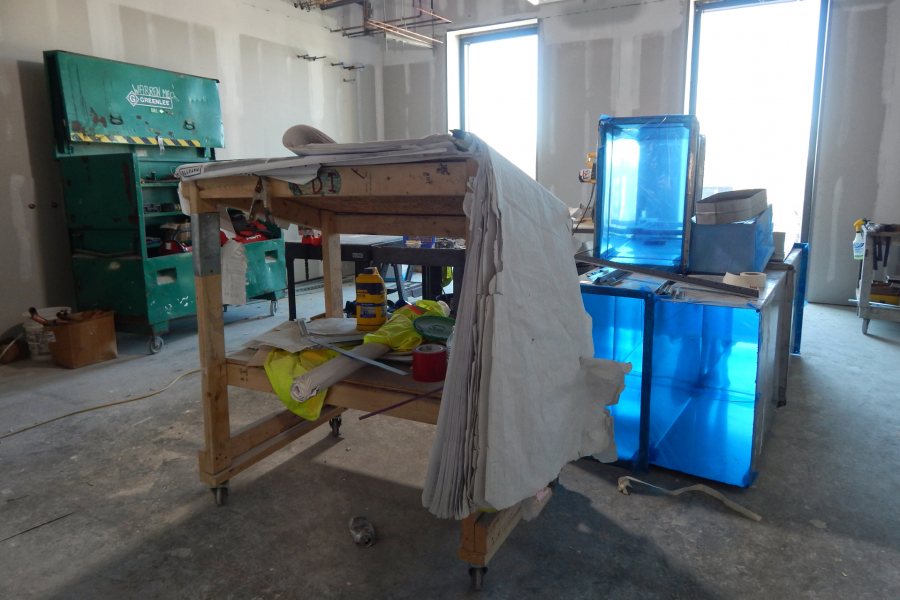 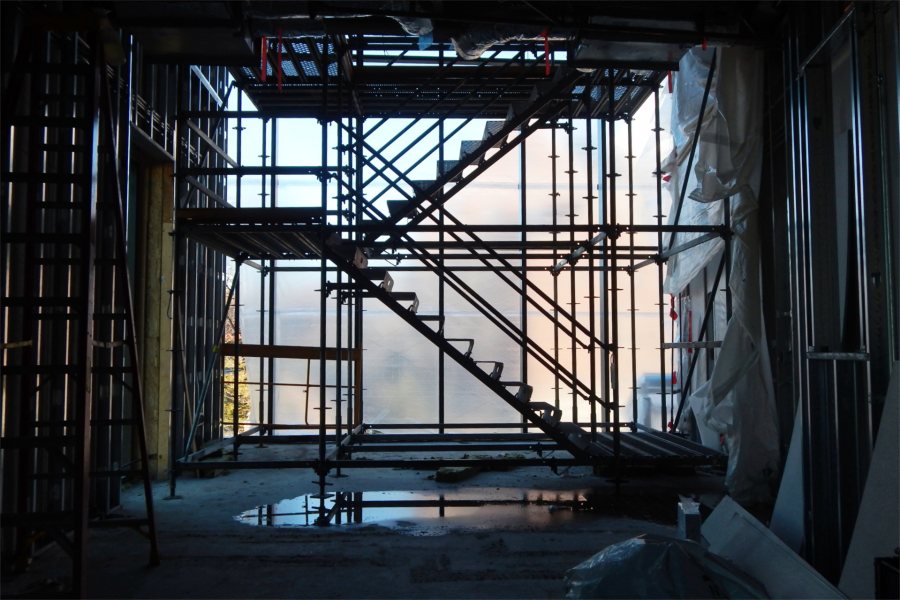 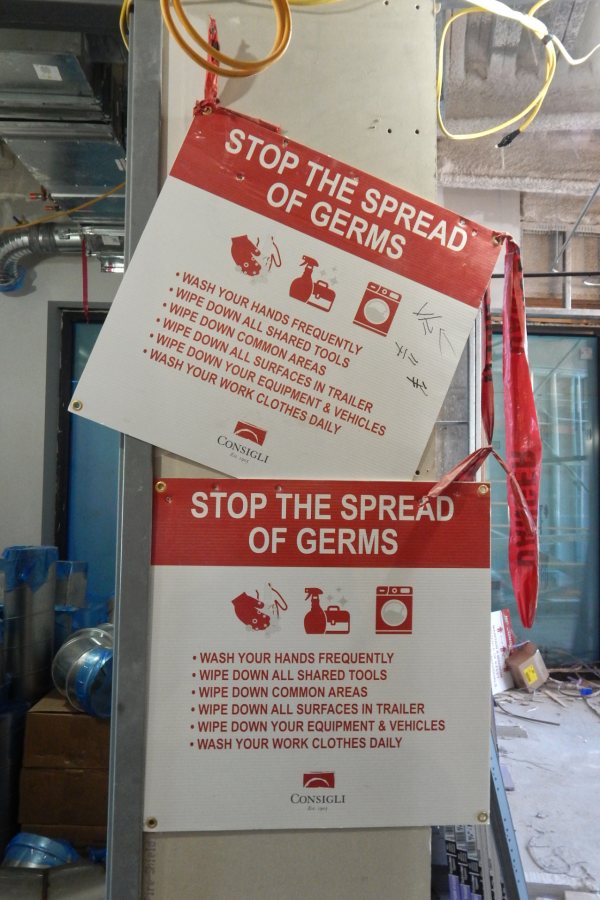 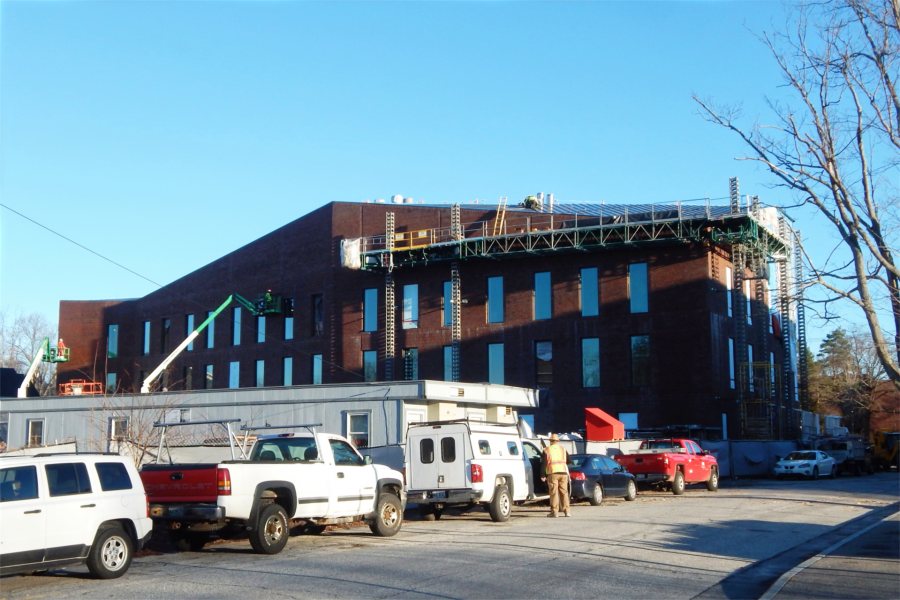 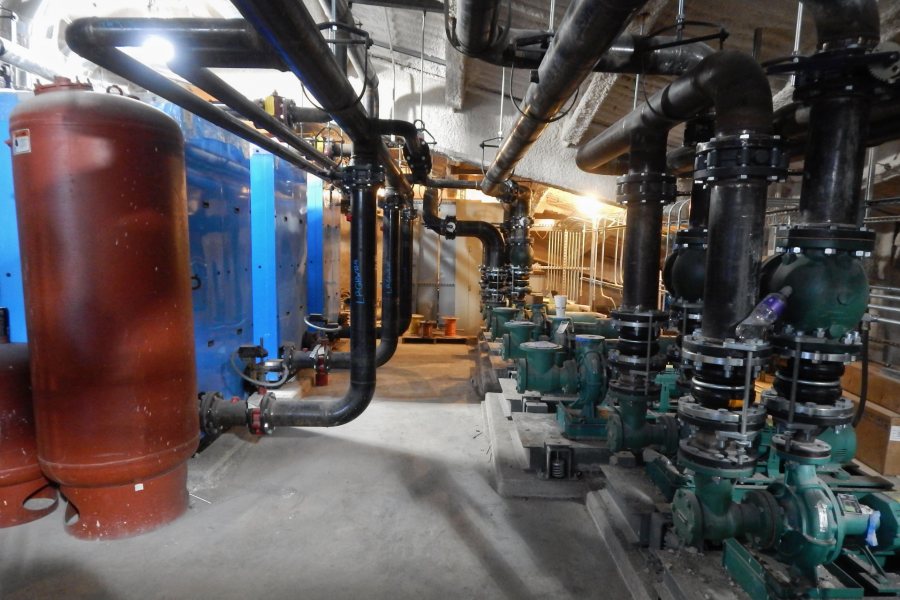 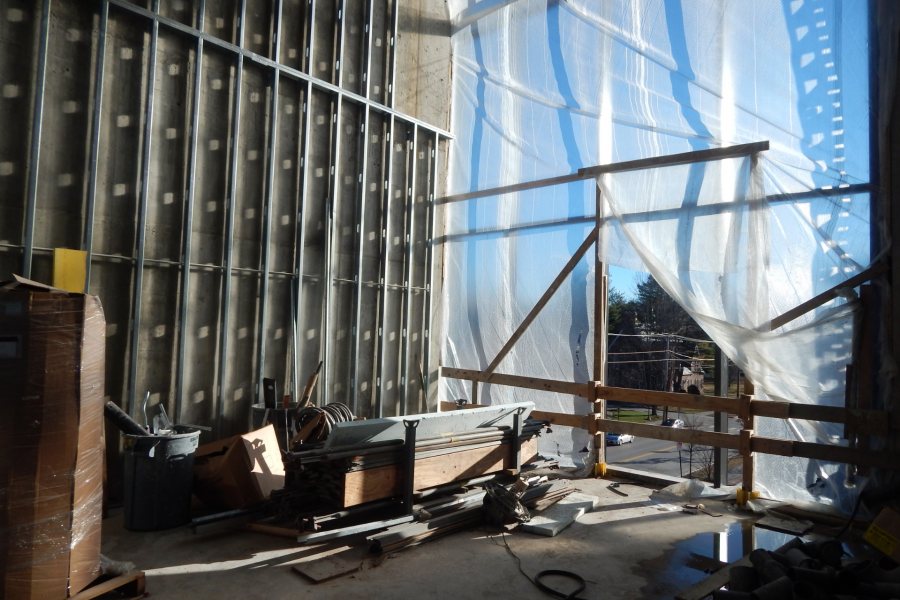 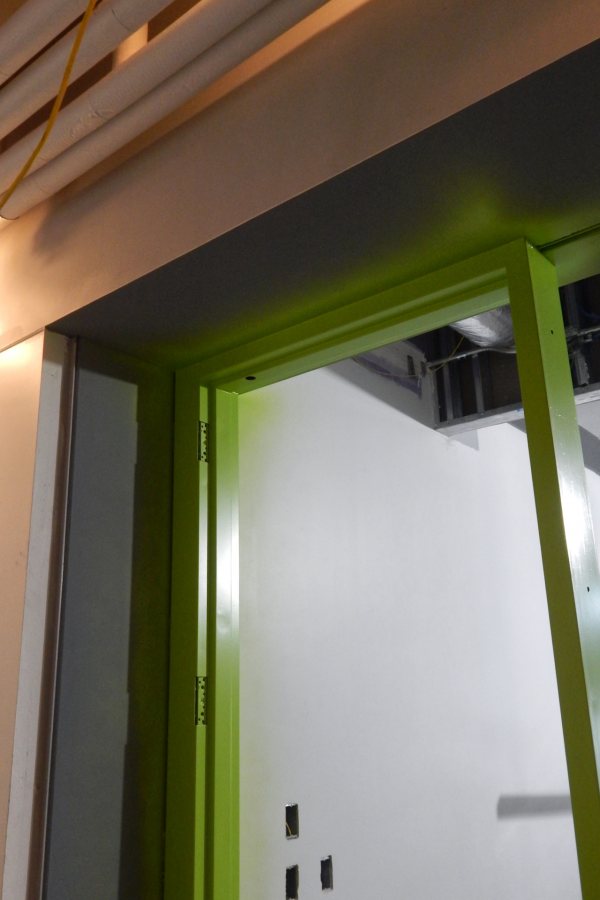 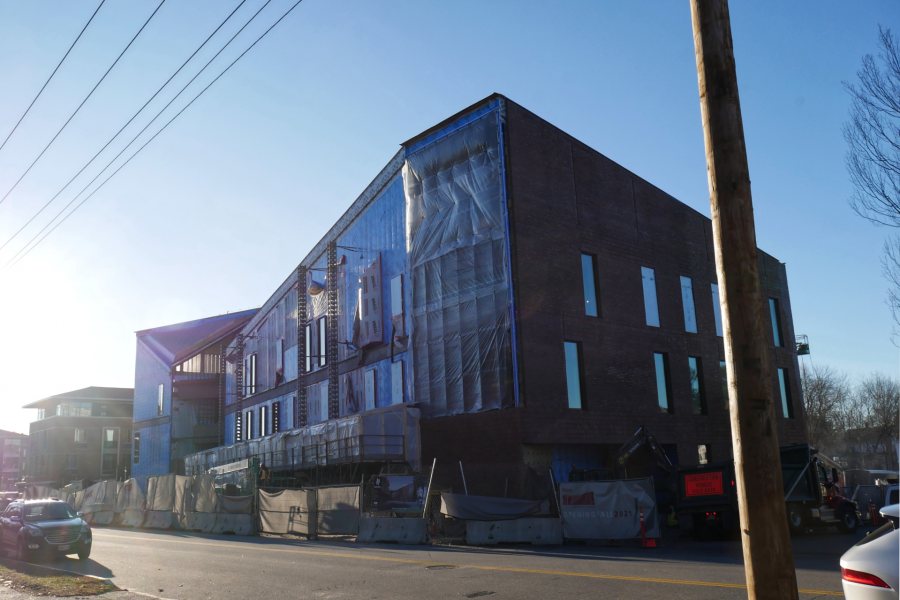 Atop the building at the right-hand corner, placement has begun of the final layer of roofing: dark gray panels of a product called ContinentalBronze, manufactured by Revere Copper Products of Rome, N.Y.

Roofers for Hahnel Brothers of Lewiston began laying the pre-oxidized copper roof covering last week. Because of its underlying structure, drainage system, and contours, the roof overall is complex enough that constructing it has been meticulously planned — and recent revisions to that planning cleared the way for the ContinentalBronze work.

Back in July, we told you about the Bonney stormwater gutters, a sophisticated setup that will route runoff into the building for discharge into city storm pipes. And as the project team pondered gutters and roof, they found ways to make the installation of the two systems less interdependent.

“The short story is that now they can put the roof on first and go to town with that, and finish the gutter second,” explains Chris Streifel, Bates project manager in charge of Bonney. The original plan was to build the gutters first. Another important revision was to the mechanism that will join the roof and gutters.

Those changes will simplify and speed construction, but that’s not the only upside. “It’s great for Bates long-term, because in my estimation, the first thing that we’ll need to do service on, during the potential 50- to 100-year lifespan of the roof, is going to be those gutters,” Streifel says.

That first section of ContinentalBronze should be finished by early next week, and you’ll get an even better view if you stand on top of your car or on a stepladder. (Campus Construction Update, in fact, never leaves the office without a stepladder and, of course, a mask).

While work inside the science center continues full tilt, the other news headlines involve the building envelope, or as the experts say, the outside of it. Arriving on the day before Thanksgiving was all the glass, cut to order, for the building’s three glass “curtain walls.” O&P Glass of Augusta, Maine, will start installing glass on one of those features, called the Beacon, any day now.

Meanwhile, near the Beacon, bricklayers for Maine Masonry have gotten to work on the Campus Avenue side of the building — their last for this project. There’s still brick work to finish on the Bardwell Street side, but the south and west faces are fully bricky.

“It’s looking great, especially if you’re coming up Nichols Street,” Streifel says. From that direction, “everything you can see looks finished. It’s wonderful.”

Can we talk? Campus Construction Update welcomes queries and comments about current, past, future, and imaginary construction at Bates. Write to dhubley@bates.edu, putting “Campus Construction” or “What have the ladder people got on you?” in the subject line.