Video: Scenes (and behind the scenes) of Puddle Jump 2022

Within vaunted traditions there are always new wrinkles. Take the Bates tradition of the Maine governor lighting a torch to kick off Winter Carnival.

This year, Maine Gov. Janet Mills didn’t do the honors — that was handled by U.S. Rep. Jared Golden ’11 (D-Maine), wielding a butane grill lighter as Charlie Gainey ’24 of Portola Valley, Calif., brandished the torch, which seemed a little less lavish this year, more of a fuel-soaked rag wrapped around an ax handle. But it got the job done.

With that, Golden became the third Bates graduate to light the torch since then-Maine Gov. Edmund Muskie ‘36 lit the first Winter Carnival torch in 1958.

The second alum was State Sen. Nate Libby ’07, D-Lewiston, who handled the duties in January 2020 and presented a Legislative Sentiment to BOC members in recognition of the the club’s centennial that year.

And another tradition shift: The torch lighting, on Friday Feb. 11, wasn’t a Winter Carnival kick-off event this year but more of a closing ceremony after a week of events.

From there, Bates runners delivered the flame, Olympics relay style, about 29 miles from Augusta back to the Puddle to light the bonfire next to Page Hall, officially beginning Puddle Jump.

As the runners were loping along state roads heading south, back on campus Jack Fruechte ’22 of Minneapolis, Minn., and several first-year students were heading out onto the frozen but sun-splashed Lake Andrews to cut the hole for the Puddle Jump.

Fruechte cut the hole in his first year and as a sophomore (last year’s was canceled due to COVID-19). But this year — another wrinkle in the tradition — big hand saws were traded in for a chainsaw.

After a few technical difficulties (a snagged pullcord) the 20-inch Stihl was sliding through all six inches of ice like it was six inches of butter. The eventual hole was 13 feet by 13 feet.

“We went out to look at the ice the day before, and we had to get a longer chainsaw, because it was thicker than we were expecting,” says Fruechte. In 2020, they almost canceled the Puddle Jump due to the thinness of the ice.

As they pulled the ice blocks from the water with tongs and used them to line a makeshift path to the hole, he jokingly told his helpers that they “didn’t just volunteer for this year; they volunteered for the next three years.”

Jack Fruechte ’22 and other students prepare the Puddle for jumping. (Jay Burns/Bates College)

By the jump’s 3 p.m. start, midday sunshine had given way to a few clouds. It was mild (42 degrees) albeit breezy, with winds from the south at 10 to 15 mph. Several hundred Bates students willingly (and enthusiastically) plunged themselves into the icy depths (well, about 5 feet) of Lake Andrews for the annual event

There was no Puddle Jump in 2021, due to the pandemic — the first jump-less year since its founding in 1975 — but students didn’t miss a beat, turning out in their Puddle-wear costumes, swim suits, and even fancy dress for that 10-second dip before heading to the bonfire.

Meanwhile, Fruechte and his comrades staffed the hole, helping to pull jumpers out. He says it can be hard to recruit volunteers to help cut the hole and then pull shivering students from the water post-leap, but the effort doesn’t go unnoticed by other students: “I went in to lunch at Commons after cutting the hole, and all my friends were there at a table, and they gave me a standing ovation.”

“I enjoy helping carry on the tradition,” says Fruechte— who has never partaken of the tradition himself, choosing to wield the chainsaw rather than take the plunge. “The Puddle’s pretty gross. I just never really had the desire to.” 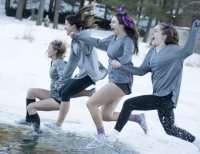