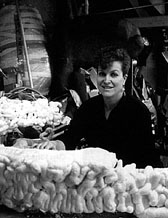 Outside, where East Broadway intersects with Canal, a dreary rain pelts the streets of Chinatown. But inside – and five flights up – at 47 Canal Street, the coffee’s brewing, as are the indomitable spirits of sculptor Carole Joy Spelic ’78, who describes her studio as “a light industrial space” and her art as “large mixed-material floor works which look weird and smell great.”Been there? Done that? Not when it comes to the New York art world, unless, of course, you happen to be a participant in the College’s Career Discovery Internship Program (CDIP). Spelic has hosted a Bates student annually since 1983 (“except for the year my studio froze after the person with the lease absconded with the money and went to Mexico”).

Experiences are short but intense, as students move into her Manhattan studio for a week. In February, Nicole Barsamian ’98, an art-history major, assisted Spelic with her sculpture, visited other artists in their studios, and attended museum and gallery exhibits. Spelic lined up one-day assistantships for Barsamian at the Curt Marcus Gallery and with the curatorial staff at the American Craft Museum.

Spelic often consummates an internship by naming a piece of sculpture after a visiting student. “Bruce Barry’s Baby” was named after — you guessed it — CDIP intern Bruce Barry ’93. “I contributed significantly to his understanding of the world and how his career could fit into it,” she wrote to the Bates Annual Alumni Fund in lieu of a monetary gift.

As an artist, Spelic has grappled with the pincer-like grasp of censorship. “Derived From Mu,” made of graphite in beeswax, was booted from a gallery show when the artist refused to alter the bubblegum-pink base. “I almost got sick,” Spelic remembers. “I felt really nauseated that someone was asking me to remove half of my piece.” She wouldn’t. But she emerged triumphant when another of her works, “Tool,” was eliminated from an exhibit. “I had to carry it away,” Spelic says of the multimedia penis. “Carrying it on the street was much better than having a show,” she asserts.

“Absolutely everything I make is papier mâché,” says Spelic who, despite her enthusiasm for this medium, makes frequent journeys into the world of found materials such as steel wool and styrofoam peanuts. She’s on her second Cuisinart, a machine she taxes mercilessly in service to her sculpture.

With an M.A. in drawing and an M.F.A. in sculpture from the State University of New York at Albany, plus a B.A. in painting, Spelic has exhibited her work throughout the United States. She also has coordinated the Empire State College Studio Semester in New York City program, an experience that transformed her from a lithographer into a sculptor a decade ago, after she participated as a graduate student.

Beauty, death, engraved writing, disfigurement, and current events often surface in her art. See “If Plato and Webster Had Met the Asmet” as an example. Or inspect Spelic’s latest project. The sculpture in progress incorporates her most recent passion, Gregg shorthand, in an exploration of the last words of Jesus Christ (“Father, forgive them, for they know not what they do.”)

“I’m really interested in everything at once,” Spelic insists. “I want to cram as much potential meaning into my work as possible.”