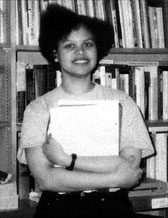 Sitting on the Job, Cathy Madison ’88 Finds a Career

Baby-sitting, not the Bard, served as Cathy Madison ’88’s fortuitous introduction to a theater career.Madison, now literary manager for the well-respected Arena Stage theater in Washington, D.C., was an English major at Bates. She took some dramatic literature courses with Professor Martin Andrucki, but the closest she ever came to Bates theater was a front-row seat in Schaeffer.

But that doesn’t mean she wasn’t learning about the stage.

During her sophomore year, a friend had given Madison’s name to theater professor Paul Kuritz, who needed a baby sitter for his twin sons. She quickly became the boys’ favorite sitter.

When not tracking the tykes, Madison would discuss theater, playwrights, and writing with Kuritz. He became a mentor. She credits him with helping her come up with the original concept for her senior thesis.

With Kuritz’s guidance, she developed a senior thesis comparing writer Langston Hughes with Owen Dodson, a 1936 graduate who became chair of the Howard University theater department. Kuritz was so impressed by the thesis that he encouraged Madison to pursue drama in graduate school.

“I didn’t think the thesis was as good as Professor Kuritz did,” said Madison. “But he called Columbia University anyway,” recommending Madison for their three-year graduate program in theater. She got in. “It was great for me because I didn’t know what I’d do (after graduating from Bates), either go into publishing or journalism.”

“I was missing theater and the jobs are few and far between,” Madison said of her days as an alumni magazine editor. “I was worried that I’d lose all ties with the arts world.”

Keeping her hand in theater by volunteering as an “in-residence dramaturge” at Columbia, working with students’ original plays, Madison learned of the opening at the Arena Stage.

As literary manager for the Arena Stage, she is responsible for reading new plays, serving as a consultant to directors, and completing production research for the director, actors, and designers for the multiple-stage theater.

Much of her time is spent evaluating plays from literary agents and individuals who send her scripts. “I look for the next great playwright — a high concept, I realize,” she said.

She admits that she reads more unknown than known writers, but she is still among the first to read Tony Kushner’s latest work or something by Susan Sontag.

As one of the top five regional theaters in the country, the Arena Stage receives scripts from literary agents around the country. On any given day, she has more than two hundred scripts in her office. Artistic directors can’t read all of the scripts, so they depend on recommendations by the literary manager. “In a good week I read five scripts,” she said. Madison has two other staff people to assist her with the reading chores.

Her job at Arena Stage splits evenly between administrative and artistic. “It suits me well,” she said. She tends to “hang out” with theater people, and her job may find her leaving her office around 6 p.m., but back in the theater at 11 p.m. to conduct a post-play discussion for the audience.

Earlier this year, Madison hosted Alice Reagan ’97 under the auspices of the Bates Career Discovery Internship Program (CDIP). This was the second year Madison participated in the program.

Reagan attended rehearsal of the musical Candide and an opening-night cast party for Dance of Death. “It was really exciting to be at the Arena Stage because it’s bustling with people, art, and theater,” she said. “Cathy took me under her wing and showed me around. She’s such a kind and caring person.”

An interdisciplinary major in women’s literature and theater, Reagan said she was impressed with the respect Madison “commands from everyone,” despite being soft-spoken and gentle. “Cathy has a lot of power over what gets read and produced. She’s so smart and does her job so well.” During one of the three days Reagan was at the Arena Stage, Madison took an afternoon to visit a high school and work with young playwrights.

“The CDIP internship is my volunteer contact with Bates,” Madison said. “Alice and I packed a lot into those three days. I’m also interested in offering an internship because I like to hear the inside gossip of what Bates is like from the point of view of a student.

“I have an interesting job that not many people know about,” Madison said. “It’s fun for me to show Bates students what I do. It’s different from the acting and directing most people associate with theater.”