Lindholm’s honorary degree; remembering the man they knew as “Hank” Stred ’53; and a chippy letter about athletics.

Finest Kind
“Dr. Lindholm, I presume” was my greeting to the genial gentleman who answered the door at 12 Nelke Place, a few blocks from campus, when Kay and I visited recently. I had been saving that line for a lot of years. Bates might have given Milton Lindholm ’35 an honorary degree at any time after his retirement in 1976. It has taken almost 30 years, till he was 93, for the College to give its highest honor to a favorite among Bates alumni, employees, and the Lewiston-Auburn community. Nevertheless, how sweet it is.

Bates has produced two of the finest human beings I have ever met in Helen Papaioanou ’49 and Milton Lindholm ’35. Each has been closely associated with the College throughout their adult lives. The trait they seem to have in common and in abundance is a genuine interest in others. It brings distinction upon the College and its alumni now that just about all possible honors have been bestowed upon each of them.
Gene Taylor ’56
Peaks Island, Maine

Remembering Hank Stred
When Priscilla Stred ’55 called us from Florida with the sad news of the death of her husband, Hank ’53, it evoked memories of a

special period in our lives. Soon after his graduation, Hank took over as secretary of the Bates Alumni Association. His youth and enthusiasm brought new vitality to that rather staid organization, at the time a strong voice in the governing of the College. How well we remember the year he offered S&H green stamps to annual fund contributors, probably raising a few eyebrows but also raising the fund total.

Hank’s quick intelligence and sometimes quirky sense of humor enlivened the office routine. With a small staff and limited budget, he often found it necessary to recruit students, spouses, or willing passers-by to get mailings out to alumni. With Hank in cheerful charge, spurring us on with quips, snatches of songs, or a commercial jingle, we managed to sort zip codes, a tiresome innovation at the time, and meet our deadline, even though it sometimes meant staying past the dinner hour.

Hank was particularly tolerant of two middle-aged women, one the editor of the magazine, the other editor of Class Notes, both journalistic novices, and he encouraged their efforts. He occasionally had to draw the line when they tried to inject a false (class) note. We did get away with “Parker Hall and his brother, Chase, both underwent extensive surgery this summer.” But Hank was adamant in refusing to allow “Hallucinda Turndon and her sister, Psychedelia, have just returned from a trip,” composed during the turbulent ’60s. We remember his zealous competitiveness, particularly at tennis, his love of music, his gregarious nature, the cookouts for family and friends, his skills with his hands, his pride in his home — so much to remember. When Hank left Bates he went on to a new career. In Augusta you can see the Frank O. Stred Medical Building honoring his outstanding service as director of the Maine Medical Association. But it’s Hank that we remember with deep affection.
Jane Ault Lindholm ’37
Ruth Rowe Wilson ’36
Lewiston, Maine

Sport Retort
As a high school teacher and coach, I was saddened and dismayed by comments made by President Elaine Tuttle Hansen regarding the athletic program at Bates (“Good Sports,” Winter 2004). She repeats the trite and tired zero-sum argument regarding the relationship between athletics and academics at the Division III level. President Hansen perpetuates the myth that athletic success must come at the expense of academic achievement and social involvement. How surprised NESCAC student-athletes must be to find that the leader of one member institution has such little faith and low expectations of their ability to succeed in more than one facet of their lives. Her commitment to “fixing problems, real and perceived,” is a transparent allusion to negative stereotypes about athletes and their place in campus life.

President Hansen states that traditional arguments about the benefits of participation in sports are built on assumptions not yet borne out by documented evidence. It is ironic that four different faculty members present several examples of such evidence on the next two pages of Bates Magazine. One must also question the singling-out of successful athletes as not being representative of the student body. Are we to assume that those students who excel in other areas such as the performing arts or political clubs do so without putting in the same time and effort as is thought to be excessive in athletics?

Perhaps the truth is that Bates suffers from a severe case of Williams envy. Why is President Hansen interested in having a “first-rate undergraduate educational institution” but only a “robust athletic program”? It is too bad that rather than trying to rise to the challenge presented by other successful Division III athletic programs, she would rather lower the performance bar for all involved. I am withholding my annual donation this year until I am convinced that this is not the first step in the dismantling of Bates athletics.
Joe Dawe ’83
Duxbury, Mass.

From President Hansen: The issue of the athletics fit within our colleges is a national discussion, not a product of the President’s Office at Bates. In the column, I did not say that Bates athletes are unrepresentative of our student body; the good news is that a recent cohort is actually more engaged in aspects of Bates life than non-athletes. Through initiatives like our liaisons program (in which I am a happy participant, with the swimming and diving teams), plus our seat at the table for NCAA discussions, we are helping make Bates a national model to be followed. Who’s atop the NESCAC standings is just one way to define “excellence.” It is our hope to discuss ways and means to define Bates excellence by the comprehensive quality of our students’ entire experience.

Chris Hobler ’87
Thank you for the well-written and insightful article on a gem of a human being — Chris Hobler ’87 (“Hope Full,” Winter 2004). My memories of him remain vivid from my Bates baseball days. On our teams, the staff was very tight-knit.

Hobie was a long-reliever/spot starter with a wicked curve, but his major contribution was as a light-hearted presence.  He played a significant role in the chemistry that our pitching staff and battery mates always had. Whether it was the hanging-around in the bullpen, the mandatory goatees, the endless tobacco chewing — I mean sunflower sucking — the camaraderie of road trips, or the after-game (Pierce House) parties, it was always great to have Hobie around. He was never an athlete first, and that was always well-appreciated.
Dennis Gromelski ’88
Albuquerque, N.M.

As fate would have it, my copy of the Winter 2004 Bates Magazine opened to the “Hope Full” article at the centerfold. I can’t begin to tell you how very much that article meant to me. Last October, at age 33, I was diagnosed with ALS. I was just starting a serious relationship and planning to start a family. Since then, I have struggled with an aloneness unlike anything I have known before. I have had such a hard time finding young people with ALS, and an even harder time finding young people with ALS who are starting families. For that reason, I read every word in “Hope Full” like I attack a bag of chocolate-covered espresso beans: eager to eat each one but nervous I’ll be at the bottom of the bag soon. Chris Hobler is a real inspiration to me, and I thank you for profiling him.
Darcy Wakefield ’92
South Portland, Maine

Tripping with the League
Since I went to Bates on the 3-2-2 plan during the ’60s, since my father has blown the horn for 79 years, since my kids all play music, and since I have played on teams my whole life, I can appreciate the Hanseatic League as much as anyone (“Roots ’66,” Winter 2004). I was at the ’88 gig, and Mack told me he played on adrenaline. Of course, Larry is the best and can probably play in his sleep, and Rick is just a ’60s kind of guy. My father wouldn’t let my brothers and me play instruments because he said it was too tough a life, but I think music has kept him young because it is about being part of something that never grows old. The Hanseatic League is a special group that is aging like fine wine. When they play, we don’t just go back to Bates — we go back to the ’60s!John “Archie” Lanza ’67 Caldwell, N.J.What kind of half-baked research are you encouraging?!

If you had dug a little deeper in researching the “Roots ’66” article, you would have discovered that after Mac Reid left Bates, the Hanseatic League lived on two more years with a very fine drummer by the name of Ted Callaghan ’70 (not to diminish at all Mr. Reid’s contribution to the band). I was with the band at the Wesleyan gig and the storied encounter with Janis Joplin. Unforgettable! It was great touring with the band and playing at the Bates dances. Thanks for the memories.
Edward Callaghan ’70
Fairbanks, Alaska

Ted’s name was inadvertently omitted from the text. We regret the mistake. — Editor

Every four months I traveled to Bates to work with a group of dedicated staff and volunteer alumni, people who enhance the programs and activities for “life after Bates” on a daily basis. To them: thank you! I am grateful for the enrichment you continue to provide to my Bates experience.

Life after Bates
The phrase “life after Bates” is a misnomer, because the Bates experience continues to impact all of us. “Batesie for life” is probably more accurate. During my council term, I have been changed by new relationships with alumni from across the decades, from a baseball-loving Maine physician of the Class of 1954 to businesspeople from Washington, D.C., of the classes of the ’80s. There are others too numerous to mention who are now my friends.

I never would have met these people if I hadn’t joined the Alumni Council and again become involved with Bates. I also met current students who reminded me of my first four years at Bates and the pride I have for Bates. They helped me better understand that my role as an alum is to support Bates just as others supported the institution when I was a student. This leads to my final point. The one troubling thing I learned during my council tenure is that we alumni are not engaged enough in the life of the College.

We do not adequately promote Bates. Certainly, the press of workdays and other immediate commitments allows us to forget the preciousness of our student experience. Alumni, however, play a vital role in the life of the College. Bates would not survive without active alumni. So, please get involved. Attend events, send in a class note, stop by the College, give to the Bates Fund, and talk about Bates, at work, with friends, or at home. Pick one or pick them all, because whatever you do is a step in the right direction: a step closer to Bates. Celebrate Bates. Take pride in Bates. The more we promote Bates the more we help the students of today and tomorrow.
Chip Hinckley ’93
Weston, Mass. 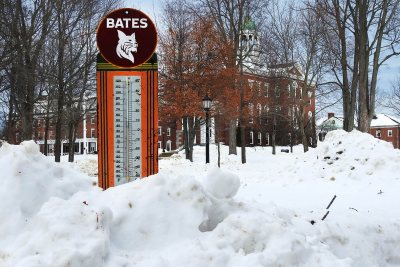