Scene Again: In 1892, Bates was best in baseball

Baseball was always big at Bates, and just a few years after the college’s 1855 founding, students were playing on town teams in Lewiston. 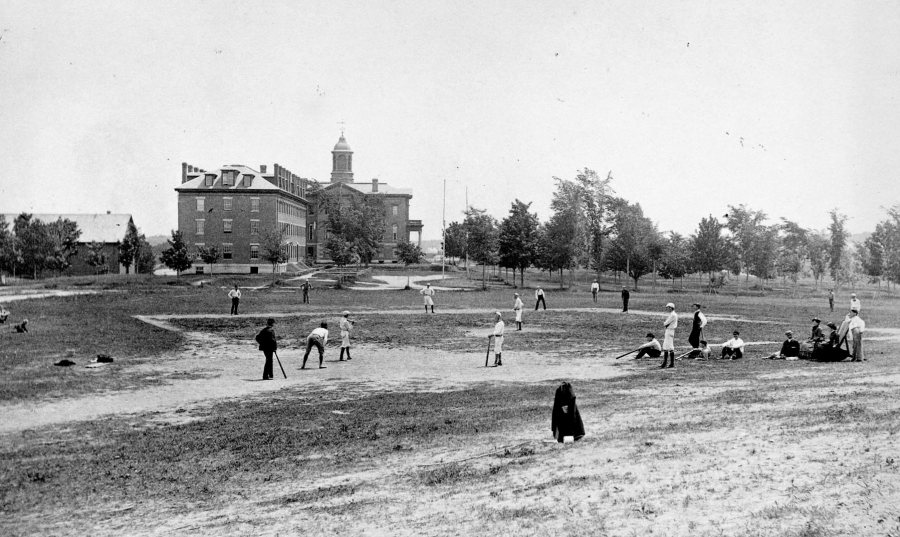 In 1882, ballplayers play baseball on the old Rand Field, as viewed from the base of Mount David. Parker and Hathorn halls are beyond left field. The original Bates gymnasium is at far left. (Muskie Archives and Special Collections LIbrary)

Oren Hilton 1871, quoted in the May 1935 Bates Alumnus, described a game between his Androscoggin Baseball Club and a team from nearby Norway.

“They came onto the grounds all together in a big hay wagon,” Hilton said. “All big, strapping husky farmers with hands like hams, and all barefoot.”

“None of us ever spoke about it afterwards.”

When the hulking Norway batters came to the plate “it was an eternal procession for them around those bases, for they literally knocked the covers off as many balls as we had on hand.”

The final result looked like a football score, “something like 35–7, and none of us ever spoke about it afterwards.”

But a couple decades later, in 1892, Bates was best college team in Maine with a 7-1 record. 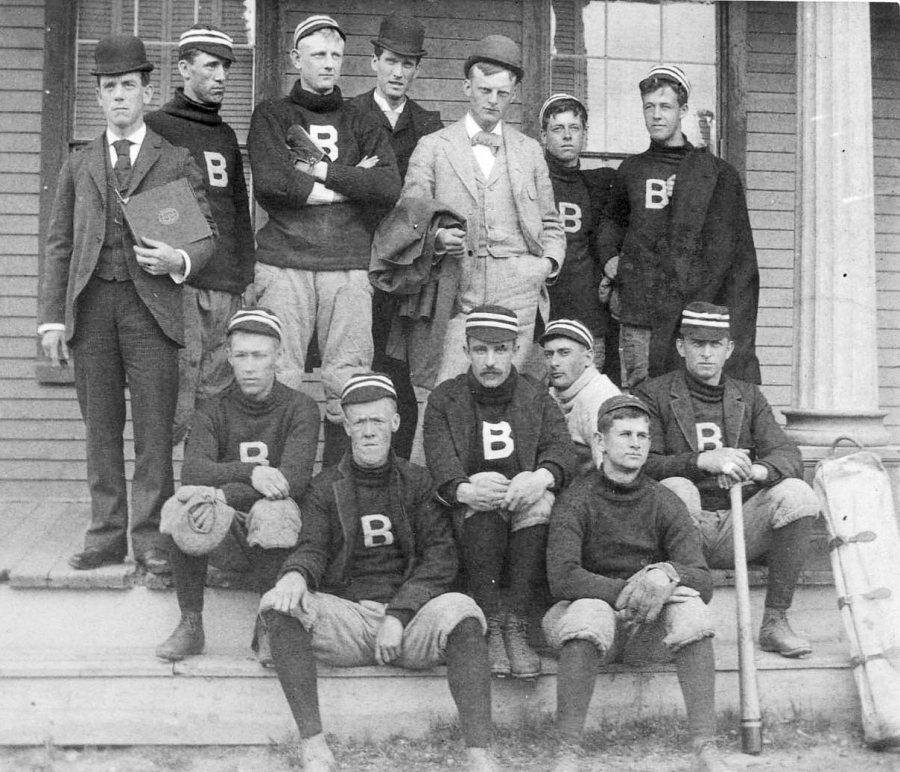 The stars of the team included left fielder William Putnam, Class of 1892 (mustachioed, seated). A slugger who hit a team-leading four home runs, Putnam was 5 feet, 11 1/2 inches and 165 pounds. That’s a burly physique in a senior class that averaged 5-10 and 151 pounds, a fact that’s known because each graduating senior’s height and weight was noted in The Bates Student.

Seated at right, bat in hand, is junior Edgar Pennell, who won the team’s silver cup for most runs scored (21).

Seated on the bottom step, with glove, is another junior, Frederick Hoffman, who won five dollars for reaching first the most times (32). Classmate George Mildram, seated bottom step, left, was the top pitcher.

Baseball already reigned as the nation’s pastime, but interest in football was growing. “The old prejudice against the game as being a brutal sport is fast dying out,” said The Bates Student in 1892.

“[I]t is not brute strength alone…but rather science which is needed to be successful in foot-ball, as well as in base-ball and other sports.”