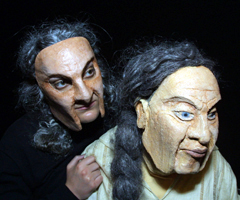 Live actors share the stage with puppets from a variety of puppetry traditions in the production of Marguerite Duras’ novel The Sea Wall. Performances are at 8 p.m. Thursday through Saturday, March 7-9, and 2 p.m. Sunday, March 10, in Gannett Theater.

Ellen Seeling, assistant professor of theater, adapted Duras‘ novel for the stage and directs this production. Seeling, who calls The Sea Wall one of her favorite novels, says that this drama set in colonial Indochina is “full of metaphorical images that translate well to puppetry.”

The widow “Ma,” the protagonist, is depicted by a bunraku-style puppet — a lifesize figure directly manipulated by two people. The power of puppetry, Seeling says, is that the audience quickly stops noticing that it’s the puppeteers, not the puppet, who are acting. “It makes it magical that way,” she says.

Both sophomores, the puppeteers operating the widow are Saida Cooper, of St. Albans, Maine, and Mark Gaworecki, of Essex Junction, Vt.

Other puppetry techniques represented in the production include shadow puppets and hand puppets, which will be used to simulate a movie being shown. At the other extreme, 10 puppeteers will manipulate a 14-foot puppet. At some points in the action, Seeling says, nearly all 14 cast members are operating puppets.

Published in France in 1950 as Un Barrage contre le Pacifique, the novel is substantially based on Duras’ own experiences growing up in Indochina, where she was born to French parents. It tells the story of a widow’s stubborn fight against poverty and the fading attachments of her children — a fight symbolized by the sea wall erected in vain to keep seawater out of the family’s rice paddies.

The novel, Duras’ third, was a hit with the French literary establishment. She went on to write 40 novels in all and several plays, and also wrote and directed films. Her best-known works are the 1984 novel The Lover and the screenplay for the 1959 film Hiroshima Mon Amour.

Seeling explains that Duras herself wrote a version of The Sea Wall for the stage, titled The Eden Cinema. “It was an honor,” the director says, to obtain the rights from the Duras estate to adapt the novel. She adds that the company has been invited to present the production on March 14 in Vermont at Marlboro College, home of a summer puppetry institute offered by the acclaimed Sandglass Theater.