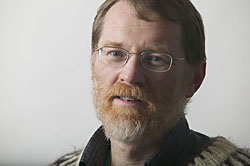 Bates College faculty members William Ambrose, of Poland, and Rebecca Herzig, of Lewiston, have been named this year’s recipients of the Ruth M. and Robert H. Kroepsch Award for Excellence in Teaching.

Bates students and recent alumni nominate Kroepsch Award recipients on the basis of their outstanding performance as teachers.

Ambrose’s research interests include issues affecting food supplies for organisms living on the Arctic Ocean floor and, of particular interest to Maine residents, the environmental impacts of commercial harvesting of marine worms such as bloodworms.

“The wonderful thing about Dr. Ambrose is, he facilitates our problem-solving,” wrote one of his nominators. “He allows us to find our own answers and I believe this is where some of the most important learning takes place.”

Ambrose has an A.B. degree from Princeton and a doctorate from the University of North Carolina at Chapel Hill. He started at Bates in 1994.

Herzig holds the only full-time faculty appointment in the Program in Women and Gender Studies at Bates. She teaches a range of interdisciplinary courses on science, technology and medicine, as well as core courses in the WGS program.

She is currently completing two books: Suffering for Science: Will, Reason, and Sacrifice in Late Nineteenth-Century America (Rutgers University Press) and The Nature of Difference: Readings in the History of Science, Race, and Sex, co-edited with Evelynn Hammonds and Abigail Bass (MIT Press).

“I always left class amazed at the insightful conclusions we had reached as a group, and at the intellectual integrity of our discussions,” a former student of Herzig’s told the Kroepsch selection committee. “This kind of collective academic achievement was possible because Professor Herzig had motivated us to read, write and think at a very high level.”

Herzig earned her B.A. in American cultural and environmental studies in 1993 from the University of California, Santa Cruz, and her doctorate from the Massachusetts Institute of Technology in 1998, the year she arrived at Bates.

Kroepsch honorees are selected from the nominees by a committee of previous recipients. The annual award is funded by an endowment established in 1985 by the late Robert H. Kroepsch, a member of the Bates class of 1933.