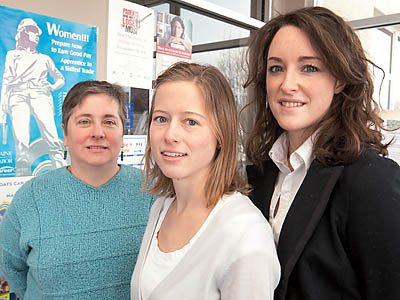 If you apply for a job cleaning houses or rounding up shopping carts, should a high school diploma or General Educational Development certificate be an essential qualification?

Yes, according to employers in Lewiston and elsewhere in Maine. “Employers assume a basic level of literacy if you have that,” says Chip Morrison, president of the Androscoggin County Chamber of Commerce.

No, say many members of Lewiston-Auburn’s growing Somali community.

Since 2001, some 3,500 refugees from violence in Somalia have settled in Lewiston, and the GED requirement imposed by some employers often bars these new Mainers from work they’re well-equipped — even overqualified — to perform. “You don’t actually need the GED to push carts at Hannaford,” says Ismail Ahmed, a Somali immigrant and consultant to employers seeking to hire Somalis.

These contrasting perspectives provide evidence of a cultural divide that Bates students explored in a high-profile research project last fall. Their work followed on the heels of a state Department of Labor report that found severe unemployment among Somalis of working age, with only 49 percent finding work between 2001 and 2006.

Wanting better insight into the obstacles facing Somalis in the job market, the Chamber and Lewiston’s branch of the state-run Maine CareerCenter asked members of a senior anthropology seminar at Bates to investigate.

Supported by $2,000 in grants from the Harward Center for Community Partnerships, the students spent weeks asking Somali job-seekers and employers about impediments to regular employment for the Somalis. And the students’ report, Perceived Barriers to Somali Immigrant Employment in Lewiston, could be summed up by the famous line in Cool Hand Luke: What we’ve got here is a failure to communicate.

Employers and would-be employees alike cited the Somalis’ lack of English skills as the single biggest employment barrier. (Perhaps surprisingly in a society still aching after Sept. 11, religious prejudice was not termed a major obstacle, although certain Muslim beliefs such as the untouchability of pork did pose practical problems for some employers.)

But there are other differences that create barriers to Somali employment.

Maine employers are integral members of a U.S. economy that’s money-based, heavily systematized, rigorously clock-oriented. The Somalis, in contrast, as the report notes, have a “flexible, spiraling” sense of time that doesn’t play well in the world of the time clock.

And they come from a system of exchange based less on the bottom line and more on personal forms of reciprocity such as swapping goods or favors. For instance, Somalis are more likely than most Americans to lend each other money at no interest, buy groceries together in bulk, or arrange work shifts so that parents can trade off minding the children, says Julia Merriman ’09 of Villanova, Pa., who served as one of two principal investigators on the project.

“It’s less about competitiveness, and more about pooling resources to gain as a community,” she says.

For these new Mainers, the employment situation feels urgent. “They have families to take care of,” says the other investigator, Daisy Hackett ’09 of Ipswich, Mass. For them, getting a GED can’t be a top priority. “They’d rather just get menial jobs that they can do without even speaking English.” (The report also says that English literacy isn’t always an issue, citing a pharmacy technician whose non-U.S. degrees aren’t recognized here.)

This cultural divide — “a big clash,” in the words of associate professor Elizabeth Eames, an anthropologist who led the Perceived Barriers project — afforded an excellent case study for the 17 students in Eames’ “Production and Reproduction” seminar, which studies comparative economics.

Toward easing the situation, the report advocated “best practices” devised by some employers, such as “conversation partners,” native English speakers who pair up with a Somali employee to help relieve communication difficulties.

Among the employers she interviewed, Merriman says, “people were happy to share what worked and what didn’t, and that was just a great forum for conversation.”

The class presented its findings publicly at a Chamber luncheon in December, and the printed report appeared in January — by which time the deepening economic recession had moved the goalposts way down the field.

The overall unemployment rate locally jumped from 4.7 percent in December 2007 to 7.4 percent a year later. And with growing numbers of well-qualified workers in the unemployment lines, barriers to Somali employment that were high to start with suddenly grew even taller.

Still, the report and its recommendations for helping employ Somalis will remain viable beyond the economic slump. “This report should not collect dust on the shelves of the powers that be,” says Ismail Ahmed.

In fact, in the state with the nation’s oldest population, immigrants like these will eventually become essential to Maine’s workforce — although that doesn’t help Somali families who need jobs now. “Here is a workforce that is just working in,” says Ahmed. “It will take awhile, but they will be very productive in the long run.”
By Doug Hubley, photograph by Phyllis Graber Jensen