Of Stamens and Stamina 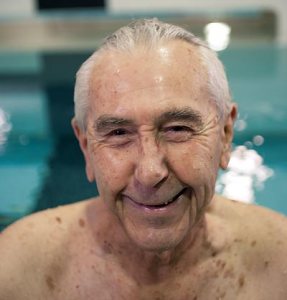 “Swimming’s not all I do, you know,” White says during a pause in his daily laps at Tarbell Pool.

For White, who turns 93 in April, there’s also a long-term project to hybridize a yellow Japanese iris, and genealogy work to trace the White family forebears further back than their arrival at Massachusetts Bay in the 1630s. And, it being winter, he’s got to clear snow from his Minot property riding his 17-horsepower garden tractor with snowblower

Around Tarbell Pool, though, White is known as the nonagenarian swimmer. Younger observers simply marvel at his ability, while older swimmers have a more complex reaction: “Jealousy,” smiles 80-year-old Professor Emeritus of Economics Ted Walther, another noonday swimmer.

A backstroke specialist since his days as Bates’ swim captain 70 years ago, White has been among the best masters swimmers in his age group for about a decade. In 2006, he was crowned the top U.S. swimmer in the 50 and 200 backstroke (yards and meters).

For obvious reasons, the older age groups draw fewer swimmers, and sometimes it’s not the speed of the event that’s remarkable but its mere occurrence. Like in 2007, when White and fellow oldsters Norman Seagrave, Everett Hanke, and John Woods swam a 200-meter relay in their masters combined-age group (360-399 years). It had never been done before.

Though slowed by eye troubles, aches and pains, and a cold, White swam the 100-yard backstroke in competition last fall, and his 2:20.60 was good for a second ranking nationally in U.S. Masters Swimming. A 90-year-old pup currently holds the 2:01.80 top spot.

As with any competitive athlete, White’s near-misses are as memorable as the triumphs. For a guy in his 10th decade, there’s a lot to consider, like the race a few years ago when his foot slipped during a turn. “I went right under the lane divider and had to start from a dead stop,” White recalls. “I lost 5 seconds, and the guy who won only beat me by a second.”

In short, White’s approach to life seems to mock the old saying attributed to the late Claude Pepper, the longtime congressman from Florida: “I’m so old I don’t even buy green bananas.”

Take White’s passions as a genealogist and iris breeder, both of which require an optimistic belief that time invested will yield a positive return.

Looking down the White family tree, he’ll tell you that in the 1900s, his mother was expelled from Bates for ice skating on Lake Andrews on a Sunday. In the 1800s, White relatives once owned Mount David, and in the 1700s his great-great-grandfather began the Whiteholm dairy farm in Auburn, where Wal-Mart is now. John White ran the family farm for many years and was later involved in real estate.

With iris breeding, meanwhile, White’s achievements include a pink iris hybrid, Dirigo Pink Milestone, seen below. In 2007, it won the Payne Medal from the Society for Japanese Irises, the highest award in its class.

White’s current project is to create a yellow variety of the species Iris ensata, the true Japanese iris. “Everybody says it can’t be done,” he says. “Even the Japanese have quit trying it. The trouble is, they didn’t think the problem through.”

“There are no known yellow I. ensata cultivars,” says Dennis Hager, president of the Society for Japanese Irises. True, there are yellow iris hybrids with I. ensata in their background, he says, but the yellow color “has never been attributed to the I. ensata parentage.”

Andrew Wheeler ’01 is a Ph.D. student at California’s Rancho Santa Ana Botanic Garden, home of the botany department of Claremont Graduate University. He’s known White for years, thanks to their mutual iris interest. “In many respects, John is one of the youngest people I know,” says Wheeler, who uses DNA sequencing to examine relationships among iris species.

White is also trying to create a tetraploid iris, a plant with double the usual chromosomes. Such a genetic structure often yields desirable qualities like larger, thicker flowers with deeper colors. 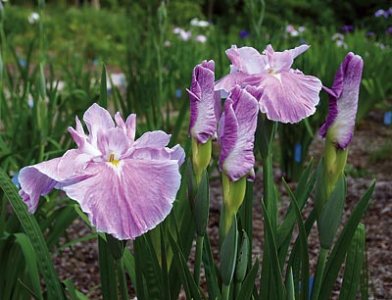 “Japanese breeders have massive fields of iris but they don’t have tetraploid breeding lines because it’s difficult and frustrating,” Wheeler says. “They don’t think they have enough time to do it. But John doesn’t care about time.”

Beneath White’s photo in the 1939 Mirror is a telling quote: “Patience is not the least of the virtues.”

“I am now in my third generation, which will have the yellow gene on both sides,” he says. “So there’s a chance when those bloom this summer I will get a yellow. That will be a true Japanese yellow iris.

“And if I don’t get a yellow, I will cross some of them again. I’ll keep going until we get it. It’s a slow process and you need luck. But if you get lucky, you get what you’re after.”

This story used information from an oral history provided by John White ’39, part of the Muskie Oral History Project and now housed at the Muskie Archives and Special Collections Library.