'Shakespeare's new play' to be performed at Bates College 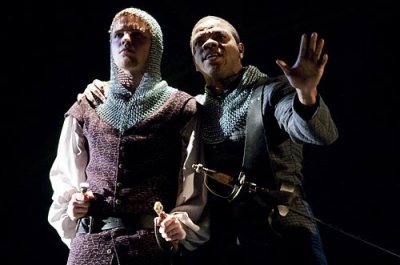 Bates College presents John Reed’s All the World’s a Grave, a new play weaving together some of Shakespeare’s most compelling characters and language, in performances at 7:30 p.m. Thursday, Friday, Sunday and Monday, Nov. 12-13 and 15-16, and at 1 p.m. Sunday, Nov. 15, in Schaeffer Theatre, 305 College St.

“At Bates we like to do classics and new plays,” says Kuritz. “All the World’s a Grave fits both categories.”

Grave is a darkly humorous imagining of the ultimate Shakespearean tragedy. Published in 2008 as a book and staged in full productions only twice to date, Reed brings characters from Othello, Hamlet, Romeo and Juliet and other of Shakespeare’s greatest hits together into a dark and twisted piece of theater.

As director Kuritz summed it up at the first production meeting, “They all die — everything turns out badly.”

In Reed’s story, Hamlet has gone to war for his wife Juliet, the daughter of King Lear. Hamlet returns home to find that his mother has murdered his father and married Macbeth. Then enters the ghost of his murdered father, the King, who torments the prince — who is further provoked by Iago who persuades Hamlet that Juliet is having an affair with Romeo. As the prince goes mad, a tale far too familiar unfolds.

Kuritz chose the play in part, he says, because “a review of the book mentioned the experience of reading Shakespeare as a new work. Familiar words in a new context cause us to rethink the words without the historical baggage of popular and critical opinion which often, and unavoidably, frames all discussion of Shakespeare’s works.”

He adds, “Students working on this play will have to confront questions not faced by actors in over 400 years of acting Shakespeare. We all come to the play without the knowledge of past productions or critical responses. We must discover what it means and how it means just as Shakespeare’s actors did.

“The audience will have a similar experience.”

At the same time, both Kuritz and the playwright note that no special knowledge of the Bard is necessary to appreciate the play. “My feeling is that Shakespeare buffs may get a little more in the way of the intricacies,” says Reed, “but that many of the lines are so familiar to everyone that their shifted contexts are obvious.”

Two students in the play, Caroline Servat of San Francisco (the Queen) and Marielle Vigneau-Britt of Canton, Conn. (Juliet), are performing as part of their senior honors theses in theater.

Designing costumes for the production is Carol Farrell, co-director of Freeport’s Figures of Speech Theatre, known for its imaginative productions that combine puppetry and other theatrical forms. Michael Reidy, a lecturer and technical director in the Bates theater department, is the set and lighting designer.

Reed teaches creative writing at New School University in New York City and is books editor of the Brooklyn Rail, a monthly journal covering arts and politics around New York and the world. He wrote the critically acclaimed and best-selling novel “Snowball’s Chance,” a parody of George Orwell’s “Animal Farm.”