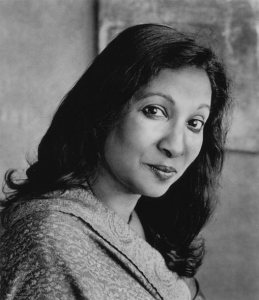 Sponsored by the English department and the Learning Associates Program, which enables faculty in the humanities and social sciences to bring outside scholars and experts to campus, the event is open to the public at no charge. For more information, please call 207-786-8294.

Alexander previously visited Bates in 2005. During this week’s visit, she will meet informally with students in courses on lyric poetry and on Asian American women writers, filmmakers and critics. Bringing her to campus is English professor Lavina Dhingra, who has published scholarly essays about, and an interview with, Alexander.

In her latest book, Poetics of Dislocation (2009), part of the award-winning Poets on Poetry series from the University of Michigan Press, Alexander looks at the creative process in herself and other writers. She discusses what it means to come to America as an adult to write poetry, and her place (and the places of others) in the collection of cultures in this country.

Alexander was born in Allahabad, India, and grew up in India and Sudan. She moved to England to study at age 18, and now lives in New York, where she is University Distinguished Professor of English at Hunter College and the Graduate Center at the City University of New York.

Along the way, she studied and did research at universities ranging from the University of Khartoum to the Sorbonne, from Brown to Columbia, from Kerala University to the National University of Singapore. Much of her work is concerned with migration and its impact on the writer’s subjectivity, and with the sometimes-violent events that compel people to cross borders.

Alexander has received fellowships from the John Simon Guggenheim Foundation, Fulbright Foundation, Rockefeller Foundation, the Arts Council of England, the National Endowment for the Humanities and the American Council of Learned Societies. She received the 2009 Distinguished Achievement Award in Literature from the South Asian Literary Association, an organization allied to the Modern Language Association, for her contributions to American literature.