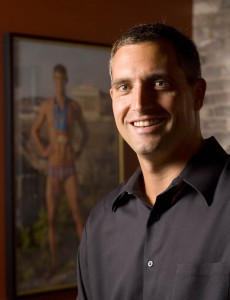 In an interview with 207, the news magazine of WCSH-TV, Portland’s NBC affiliate, sports agent Peter Carlisle ’91 discusses the Olympics from an agent’s perspective.

Carlisle is considered among the most influential agents for his work with Olympic and action sports athletes. His many clients include Michael Phelps (but the 207 interview was taped prior to the games, so there’s not much Phelps content).

For Carlisle, the Olympics demands reactive and proactive work, and there’s too much to get done.

“Adrenaline just gets you through it. There is very little time for sleep,” he tells 207′s Rob Caldwell. “You’re up early and generally work straight through the wee hours of the morning and get what sleep you can.”

Early on, he typically works with clients who are retired athletes doing public appearances or hospitality programs.

“You’re going to the events and reacting to how successful or not the athletes are,” Carlisle says. “Then, as you get through the games, much of the energy is trying to figure out, when the games end, where are we going with these athletes, and how are we going to commercialize this opportunity?”

The dizzying pace makes it hard to enjoy the Olympics in real time.

“It’s so fast-paced, and you feel so much responsibility for what you have going on from a business standpoint,” he says. “A lot of the enjoyment you get…comes after the games, or years after the games, when you think back and recall all the experiences you had.”