By Victoria Stanton. Published on December 6, 2012 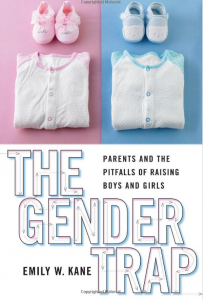 In recent interviews with public radio, Professor of Sociology Emily Kane talks about her new book, The Gender Trap: Parents and the Pitfalls of Raising Boys and Girls, and why customs like pink for girls and blue for boys are not necessarily benign choices.

Asked about the impact of gender-specific toys, colors and activities, Kane tells the North Texas Public Media program Think that these choices “are not just about whether we train boys and girls to be different. It’s about whether we might be reproducing structures that systematically disadvantage girls and women.”

What’s more, Kane says, while we often believe that all gender differences in children are natural, many are actually the result of specific parental and societal choices and reinforcement.

In her interview with Southern California Public Radio’s Take Two, she says that by choosing gender-specific opportunities and surroundings for our children, “we’re constructing these categories of boys and girls and kind of convincing ourselves that it’s inevitable.”

But it’s not inevitable, she says.

Referring to the fact that many of the parents she interviewed in the study wanted to offer their children a wider range of possibilities but feared social judgments, Kane notes, “One of my hopes with this book is that…we may realize there are more of us who want to see some kind of relaxing of those constraints than we might otherwise realize, so in that sense it wouldn’t be so hard to swim upstream.”

That might mean choosing neutral colors and toys that “would be interesting to any small human being.”

Convocation 2017: ‘A time to take up our work with new resolve’