The Many and One movement in Lewiston-Auburn, formed to support the local Somali community, reached a peak with a massive rally in packed Merrill Gymnasium on Jan. 11, 2003. 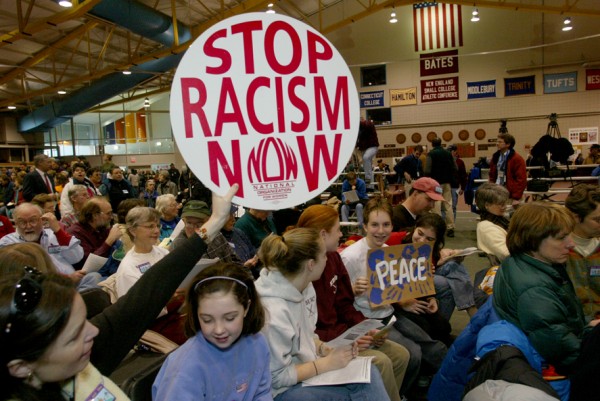 The Many and One rally in Merrill Gym on Jan. 11, 2003, sent a strong, unified message far and wide. Photograph by Phyllis Graber Jensen/Bates College.

The program featured city and community leaders, among them Heather Lindkvist, a Bates anthropolgist who is special assistant to the president for diversity and inclusion, and Sarah Davis ’10, who during her time at Bates led or took part in various programs that help integrate new immigrants and refugees into the Lewiston-Auburn community.

In 2003, the Many and One rally sought to drown out the message of hate at another rally that same day, by the white supremacist group World Church of the Creator.

The rally also responded to anti-immigrant sentiments earlier that year, specifically the infamous letter by then-Mayor Larry Raymond to the local Somali community saying that the Somalis had “maxed out” city resources and that a “large number of new arrivals cannot continue without negative results for all.”

“The hate group was big, but the local response was bigger,” writes Sun Journal staff writer Mark Laflamme. “Thousands turned out at Bates College’s Merrill Gymnasium in counter-protest, an outpouring that is still regarded as a turning point for the immigrants in Lewiston.”

It was a peak moment, but Lindkvist, quoted in Laflamme’s story, says that the Many and One coalition was just a start. “The coalition was sustained beyond that one event,” she says. When issues of hate and racism emerge on occasion, “we still come together and say we will not tolerate this.” 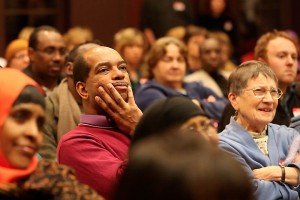 Associate Dean of Students James Reese listens to the speakers at the 10th anniversary of the Many and One rally, held at Lewiston Public Library on Jan. 11, 2013. Photograph by Phyllis Graber Jensen/Bates College.

Lindkvist tells WGME-TV that the rally “catalyzed and energized people to focus on issues around tolerance, acceptance [and] coexistence and a way that hadn’t been done before.”

Davis, director of Welcoming Maine, a group that introduces immigrants to various city programs and resources, tells WGME-TV that the story of Jan. 11, 2003, is one of “unity, when different people came together from all different walks of life and stood together and raised their voices and said, ‘this is us.'”