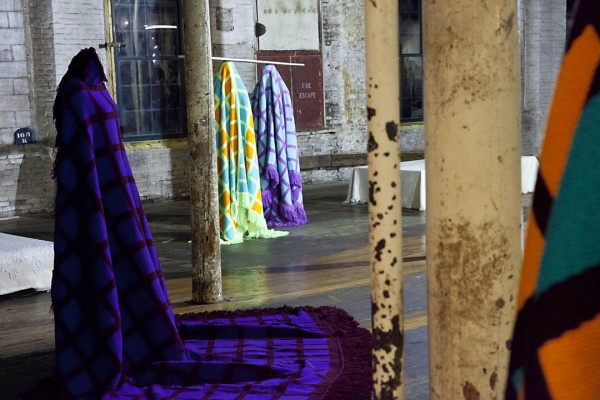 Part of an installation by Fransje Killaars at the former Bates Manufacturing Co. Mill No. 1. A panel including Killaars speaks at Bates on March 21. Photograph by Phyllis Graber Jensen/Bates College.

The curator of art at The Andy Warhol Museum is among the panelists in a discussion of Fransje Killaars’ textile-installation exhibition Color at the Center at 7 p.m. Thursday, March 21, at the Olin Arts Center at Bates College, 75 Russell St.

Mills curated Killaars’ exhibition, which is showing through March 22 at the Bates museum and at Museum L-A, in downtown Lewiston.

The panel is open to the public at no cost. The discussion takes place in Room 104 of the arts center, followed by a reception in the museum, also at the arts center. For more information, please call 207-786-6158.

Killaars, a Dutch artist renowned for her cross-cultural, boldly colorful textile installations, was invited to show work at Bates and in a former Bates Manufacturing Company textile mill, now an expanse of space within Museum L-A. For the latter, Killaars was invited to incorporate Bates-brand bedspreads, once woven in the mill, into a site-specific work.

(The textile company and the college were both named for 19th-century Lewiston entrepreneur Benjamin Bates, who founded the former and was a benefactor of the latter.)

The March 21 program begins with a screening of Dutch Masters in the 21st Century: Fransje Killaars, a 15-minute documentary directed by noted filmmaker Heddy Honigmann. The panel will then discuss Killaars’ installations, including the work in Color in the Center.

Born in the Netherlands in 1959, Killaars is a remarkable colorist who approaches textiles in challenging ways that are as much cultural statements as they are vigorously conceptual. Her installations merge art, architecture, fashion and interior design. They may combine fabrics from Japan, blankets designed by the artist and hand-woven in India, and draped figures reminiscent of contemporary and historic representations of women.

Her most common ‘formats’ are carpets and bedspreads, or gridded pieces of fabric, which are made for her in a women’s cooperative in India. These, and periodic inclusions of the human figure in the form of mannequins, are the most frequent components of her installations.

Trained at the Rijksakademie in Amsterdam, Killaars began her career as a painter. Her influences included Barnett Newman, Ellsworth Kelly and Henri Matisse. In 1984, the year she left art school, she became a studio assistant for internationally recognized painter and sculptor Sol Lewitt, who also left a lasting impression on her. 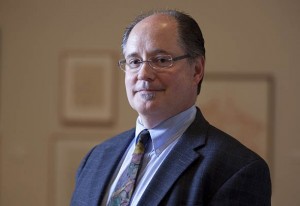 Killaars’ work has been exhibited extensively throughout Europe, and in Japan, China and the U.S., most recently at Galerie Zürcher in New York (2012) and MASS MoCA in North Adams, Mass.

This program is supported, in part, by the Mondriaan Fund, public funds from the Consulate General of The Netherlands in New York and a Bates Learning Associates Program Grant. Killaars’ work is presented courtesy of Galerie de Expeditie, Amsterdam.

Since 2004, Desgrosseilliers has been at Museum L-A, a museum of work and community that tells the story of the people of the Lewiston-Auburn region. The museum has won several regional and national awards, and prides itself in being a “museum without walls.”

Desgrosseilliers founded Lewiston-Auburn’s popular Great Falls Balloon Festival, which brings more than 140,000 people to the community for a three-day weekend and up to $6 million in economic impact each year.

She has been a member of the Chamber of Commerce-Regional Image Committee since its inception, working on the committee’s Marketing Task Force on the rebranding of the community. She is also a member of the L-A Future Forum. Desgrosseilliers operated a business for 20 years in Auburn and has received numerous business and community awards.

Chambers holds master of arts and bachelor of arts degrees from the University of Sydney. He has worked across a diverse range of exhibition platforms, from artist-run initiatives to university galleries and major public museums.

Exhibitions he has developed include Katharina Grosse: Picture Park and Spencer Finch: As if the sea should part and show a further sea, both at the Queensland Art Gallery | Gallery of Modern Art; and “Pierre Bismuth: Coming Soon” at the Santa Monica Museum of Art.

Nationally esteemed as a curator and arts administrator, Mills joined the Bates College Museum of Art in 2013. He came to Maine from Bucknell University, where for nine years he served as director of the Samek Art Gallery.

Mills is also an internationally known artist whose work, in a variety of media, explores themes and imagery including cartography, humor, imperialism, cartoon characters, landscape and portraiture.
He earned his bachelor’s degree in fine arts at the Rochester Institute of Technology and his master’s at Northern Illinois University.